January 21 2016
64
On the eve, the Minister of Energy and Coal Industry of Ukraine Volodymyr Demchyshyn during the meeting of the government "Square" made a proposal to extend the emergency situation in the energy sector of Ukraine. For a start, it is worth recalling that the emergency mode was introduced by the Yatsenyuk Cabinet 9 December 2015. The wording of that time was as follows (quote UNIAN):


In order to overcome the consequences of a long disruption of the normal operation of the electric energy market due to emergency situations in the United Energy System of Ukraine caused by damage to electric power plants, their elements and structures, and to ensure reliable, uninterrupted (stable) operation of the United Energy System of Ukraine, agree with the proposal of the Ministry energy and coal industry on the need for the adoption of such temporary emergency ynyh measures. 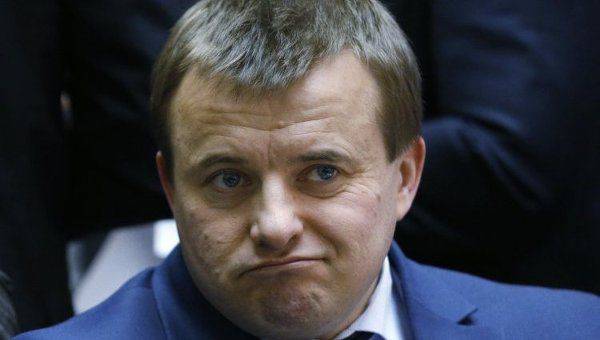 The situation was complicated by frosts that came to Ukraine, and the fact that thermal power plants did not receive sufficient amounts of fuel. As a result, in Kiev once again they started talking that it was time to come to an agreement again with the Republic of South Africa, so that it would “brotherly” give a lift to the coal ... Is it suitable for ukroelektrostantsiy? Cabinet of Ministers "Square" decided again to postpone this conversation "for later."

Now, the idea of ​​Demchyshyn to extend the state of emergency in the energy sector of Ukraine in the Cabinet was categorically rejected. Interestingly, in the end, the head of the Ministry of Energy and Coal of Ukraine himself said that the emergency mode, they say, is not really necessary to extend. At the same time, Demchyshyn, who a couple of days ago (on Tuesday) stated that it was extremely necessary to purchase coal from South Africa, and that 85 thousand tons of such coal would be delivered to Ukraine in early February, already on Wednesday (that is, the day after) suddenly announced that Ukraine "managed to save about half a million tons of coal." The logic of Minister Demchishin was “appreciated” by the Ukrainian citizens, who made social networks boil over questions about why to buy coal on the other “edge” of the Earth, if half a million tons were “saved”, and about the purpose for which energy is generally saved, if in the majority Ukrainian apartments in the presence of central heating thermometer does not rise above 15-16 Celsius? ..

The answer to these reasonable questions asked by Ukrainian citizens to their Cabinet, there can be only one: coal, if it was saved, then saved it directly to the citizens of Ukraine and their welfare.

Against the background of coal passions and talk of introducing or not introducing a new stage of the emergency mode, the Ukrainian government announces its readiness to increase payments for the transit of Russian gas to Europe 1,5 times. According to the same Demchishin, the transit rate has already been raised (by whom?), And now it will be 4,5 dollars per 100 km of 1 transit thousand cubic meters of gas. Moreover, Kiev is little concerned about the simple fact that a contract between Russia and Ukraine is valid until 2019, and to raise interest rates, interest, prices, etc. etc. unilaterally, none of the parties.

Although what kind of general implementation of the contract Kiev can say, if he (Kiev) has long broken in this contract everything that could be broken. From the latter - Kiev (specifically, NAK Naftogaz of Ukraine) in the 3 quarter of 2015 did not agree with Gazprom on the extension of the cancellation of the take-or-pay formula. At that time, Kiev practically did not buy Russian gas officially (honestly, except for Russian gas, which Kiev bought as a “reverse” from European countries that discovered surpluses), and, of course, did not pay the money. Gazprom has calculated that only for 3-th quarter of 2015, the debt of Naftogaz, accumulated based on the take-or-pay formula, amounted to 2,5 billion dollars. This, incidentally, to those 8,2 billion dollars, which were formed in the form of debt "Naftogaz" to "Gazprom". If you measure the depth of the entire debt hole of Ukraine to Russia for gas only in the last few years, then it is completely astronomical - it came close to $ 30 billion.

It is clear that Kiev will not pay. It is also clear that there is nothing to pay, because everything was plundered by the Ukrainian oligarchy for a long time, and by those who managed to jump into the last carriage of the maydan train leading to the “energy” and, as a result, economic collapse (oh, that is, peremog ... ).

What to do? Gazprom has decided to file a lawsuit with the Stockholm arbitration, and Naftogaz is filing a counterclaim. And although it is clear that it was the Ukrainian side that actually spat on the contract and did not, by the way, sign a new contract, we should assume that there is nothing to catch Gazprom through the Stockholm arbitration under the current conditions ... There’s nothing because even arbitration not “Minsky”, but the most that Stockholm has with all the consequences ...

Of course, it is possible to express the most diverse points of view regarding the fact that Gazprom will “shake out” debts from Naftogaz. That's just all the recent time for such shocks for some reason was not found. Therefore, they are unlikely to prove themselves today.

In any case, in such conditions, you will have to continue to pay attention to the quirks of Kiev and the reluctance of the Ukrainian leadership formed somewhere at the genetic level to honestly conduct business and contacts with any partners. And this attention will be addressed exactly as long as Ukraine is a transit state. As soon as the “Square” is forgiven with this status (and sooner or later it will happen if the Maidan grows into the subcortex ...), so in the toolkit for blackmail in the Ukrainian authorities, as they say, it will be reduced, because the empty rusting pipe under the gas "such an instrument is not by definition.

Ctrl Enter
Noticed oshЫbku Highlight text and press. Ctrl + Enter
We are
Prime passion. Who will replace Yatsenyuk as prime minister of Ukraine?Situational analysis of the death of the MH17 flight (Malaysian Boeing 777), made on the basis of engineering analysis from 15.08.2014
64 comments
Information
Dear reader, to leave comments on the publication, you must to register.