January 22 2016
9
Despite all the successes of science and technology, laser systems still have not been able to become weaponssuitable for use in practice. Various prototypes of such weapons were developed and built, but none of them, to the best of our knowledge, have so far succeeded in gaining widespread acceptance among the troops. In the course of numerous projects, laser weapons tried to “teach” not only to attack the enemy, but also to protect friendly troops. It was for this purpose that the American laser protection system AN / VLQ-7 Stingray was created.


The first works on a promising system, the purpose of which was to form a general appearance and define requirements, started back in the late seventies. The preliminary development of the project took several years, after which the opportunity to begin full-fledged design work. The project contract was awarded to the Martin Marietta Electronics and Missiles Group. In addition, some other organizations were involved in the project as subcontractors. So, for the development of a laser emitter, General Electric should have been responsible. The new phase of the Stingray project began in the 1982 year.

In accordance with the requirements of the customer, development companies had to create a relatively compact set of special tools intended for installation on existing military equipment. The main carrier of the AN / VLQ-7 complex was to be the M2 Bradley infantry fighting vehicle. The equipment of the prospective complex was supposed to scan the surrounding space, look for the optical devices of the enemy and, if necessary, hit them with a laser beam. It was assumed that the opto-electronic systems will be disabled by the destruction of photosensitive elements, and the use of other optics will be impossible due to the temporary or permanent blinding of its operator. 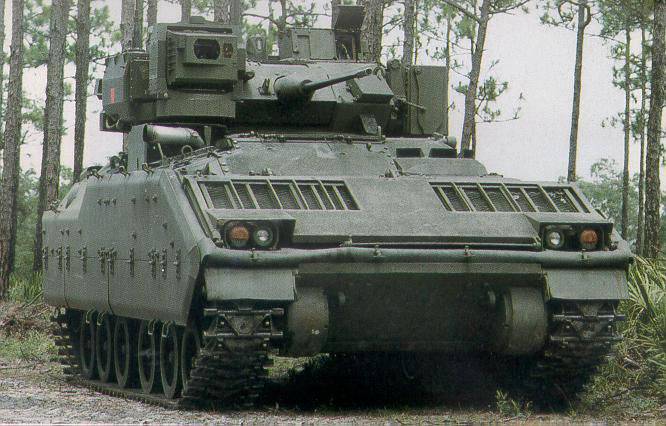 One of the prototypes of the BMP with the Stingray complex. The optoelectronic unit on the tower is clearly visible. Photo Strangernn.livejournal.com

The result of the design work was the creation of a complex consisting of four main units mounted inside the fighting compartment or on the base of the base machine. The complex includes a sensor system with opto-electronic sensors, a laser system, a computing unit with control electronics and a console installed in the workplace of one of the crew members of the base armored vehicle. The total weight of all Stingray components did not exceed 350 pounds (slightly less than 160 kg). Thus, the carrier of this complex could be not only the M2 Bradley BMP, but also other military equipment, up to and including all-terrain vehicles.

During the tests of the laser complex, the existing Bradley infantry fighting vehicles were used as base equipment, on which all the necessary equipment was mounted. Part of the equipment was proposed to be installed inside the tower, and a block with various optical-electronic equipment, including a laser emitter, should be fixed on its outer surface. In this regard, the experimental machine tower was slightly modified. A protrusion appeared on her left cheekbone with fastenings for an equipment unit. The unit itself was a relatively large casing mounted on horizontal and vertical guidance mechanisms. Directly on the tower mounts secured a square frame, inside which was located a block with special equipment. Thanks to this, the optical-electronic systems of the AN / VLQ-7 complex could move and monitor the situation on their own, without being tied to the target equipment of the BMP itself. However, vertical and horizontal guidance could be performed only within a relatively narrow sector. A review of the entire upper hemisphere was not envisaged.

The general principle of the complex looked quite simple. After switching on the equipment, the optoelectronic systems should monitor the surrounding space and search for enemy optics. For this purpose, a low-power laser was used, capable of forming glares on the lenses of the desired equipment. After that, the danger of the detected object was determined, and then, if necessary, the main laser was used, which hit the detected optical devices. According to some reports, the power of the main "combat" laser reached 1 kW.

According to reports, the electronics of the Stingray complex could operate in several modes, differing from each other by the distribution of roles between the automation and the operator. In the fully automatic mode, the search for targets in the specified sector followed by their “shelling” was conducted without the participation of the operator, he could only follow the results of the electronics. In the semi-automatic mode, the equipment itself could search for targets, but the operator gave a command to defeat them. In addition, in this mode, it was possible to attack targets without the use of a laser, with existing cannon or rocket weapons, or to conduct reconnaissance, setting the location of objects. In manual mode, the operator completely took over the management of the complex and had to independently search for targets, direct and apply the main laser.

The main task of the AN / VLQ-7 Stingray system was to reduce the risks for armored vehicles and infantry units. It was assumed that in addition to the three “standard” BMPs, the platoon of the motorized infantry will include one machine with a laser complex. With the help of the main armament, it will be able to support infantry and fight against various targets, and the laser complex will help protect equipment and fighters from anti-tank missile systems, snipers, etc.

The main purpose of a promising laser complex was to protect friendly equipment and infantry from enemy fire. However, the equipment used in theory allowed other applications. According to some data, in the future, new methods of using the Stingray complex were confirmed during the tests.

The automation of the AN / VLQ-7 complex could independently conduct the search for optical devices of the enemy in a given sector. In the semiautomatic mode, independent attack was excluded. This allowed the complex operator to solve not only combat missions, but also perform reconnaissance. By determining the direction and distance, it was possible to calculate the coordinates of the target and transfer them to information consumers. Thus, the BMP with the Stingray complex could become a reconnaissance vehicle and perform a search for targets in various conditions at relatively large distances, using only visual principles of detection and almost without unmasking themselves with radiation.

It was also proposed to use the equipment with the Stingray complex for patrolling or protecting certain territories. In this case, laser equipment could be used to automatically search for potentially dangerous objects in the protected area. In this case, there were some limitations associated with the use of enemy optics: the detection of other objects that are not equipped with lenses, was not guaranteed.

The first prototype of the AN / VLQ-7 system was assembled in the mid-eighties. After checks at the stand, all the equipment was mounted on the M2 Bradley serial infantry fighting vehicle. In this form, the experimental machine participated in further trials. During the tests, it was planned not only to test the operation of various systems, but also to carry out a refinement with the elimination of the identified deficiencies. In addition, many algorithms of automation required the study, testing and refinement. Because of this, the tests of the first prototype on a crawler course lasted about three years.

After completing the tests and finalizing the first Bradley prototype with the Stingray system, the assembly of the second machine in a similar configuration began. As a base for it was again taken serial BMP. The production of the second prototype was completed, roughly, in 1990 year. Shortly thereafter, two prospective vehicles could take part in actual combat.

By the time the second prototype was completed, the situation in the Middle East had noticeably deteriorated. For this reason, in 1990, it was decided to test a new technique in the context of a real armed conflict, which was to begin as soon as possible. According to reports, while preparing for a ground operation in Kuwait and Iraq, both M2 Bradley and AN / VLQ-7 Stingray complexes were delivered to Saudi Arabia. After the start of ground operations, these machines were to join the battle and show their capabilities in practice.

Nevertheless, the preparation for the combat use of the new technology was delayed, and the ground part of the war against Iraq turned out to be short-lived. As a result, until the end of the ground operation, both machines with the Stingray system stood on one of the American bases. By the time the training was completed, the fighting was over, which was why it was decided not to send prototypes to the front. Soon they were transported back to the USA for further work. 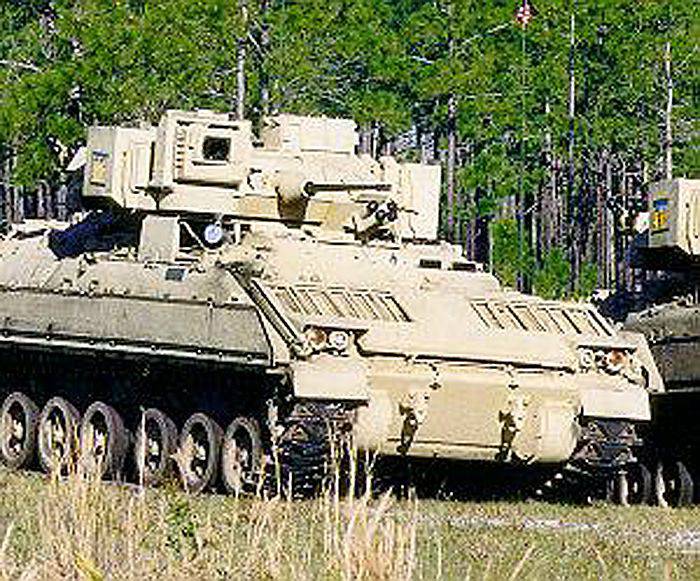 One of the experimental machines in the desert color. Photo by Fas.org

Work on the AN / VLQ-7 Stingray project continued until the mid-nineties. After the “failure” in Iraq, field testing continued, during which new equipment was constantly improved and tested. In addition, new original methods of using equipment that were not related to the direct conduct of the battle were tested. Until the end of the test, only two experimental machines with a full set of special equipment participated in them.

Apparently, all the work on the Stingray project ended in 1995. In the defense budget for the 1996 fiscal year, the costs for this development were not included. At the same time, according to some data, the project was already ready for a new stage, during which it was possible to set up mass production and send equipment to the troops. According to the plans of that time, each platoon with an M2 Bradley infantry fighting vehicle was supposed to receive one machine with laser equipment. Installation of lasers on cars, such as HMMWV, was not planned. In addition, it was argued that armored vehicles with new equipment could get into the so-called. Experimental Force, the creation of which was implied by the Task Force XXI plan. Nevertheless, all these plans remained on paper. Due to the termination of funding, all work was stopped. In the future, the Pentagon did not resume payment for work, because of which the once promising project went to the archive.

Officially, the main reason for abandoning the Stingray project was international norms. In October 1995 of the year, Protocol IV (on blinding laser weapons) to the Convention on the prohibition or restriction of the use of specific types of conventional weapons that may be considered to cause excessive damage or have indiscriminate effect entered into force. This document directly forbade the development and use of laser weapons systems that can blind a person. The principle of operation of the AN / VLQ-7 complex was to disable optical-electronic systems or dazzle the optics operator. Thus, this system is directly subject to the Protocol to the Convention.

It can be assumed that international standards were not the only reason for refusing further work. It is possible that the characteristics of the newest complex, even after several years of work, did not fully suit the customer. Thus, due to the lack of serious success in the last few years, it was decided to abandon the further development of the project.

Regardless of the real reasons, in 1995, all work on the AN / VLQ-7 Stingray complex ceased. The achievements of this project were later used to create new laser systems that can be used to solve various tasks. The fate of the two prototypes is unknown. Probably, special equipment was removed from them and later used in new projects or returned to the army.