Where is Germany drifting in the waves of the crisis with the influx of migrants?

January 21 2016
94
This question today worries the German neighbors in the European Union. Some are fascinated by commonplace curiosity - to see how the German authorities cope with such a flood of refugees. Others already assess the danger of the growing popularity of right-wing movements and organizations professing radical and nationalist views. The Polish Catholic magazine Polonia Christiana, published in Krakow, even tried to find out from a famous scientist, Professor Roman Kokhnovsky, “will the crisis in Germany contribute to the emergence of a new Hitler?” 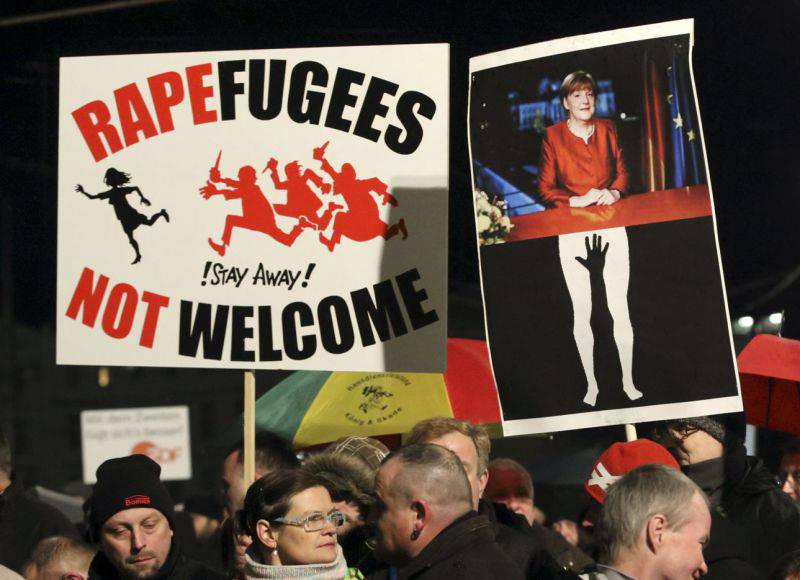 At first glance, the question of a Christian magazine gives cave stupidity. That's exactly what you want to evaluate it, but something stops. Maybe historical memory? Germans are not alien to her either. Famous events of the New Year's night in cities in Germany, when hundreds of women were subjected to robbery, violence and humiliation of migrants, local journalists called “the night of long hands”. The epithet gives more scabrousness than the horror that the unfortunate Germans survived, deprived of the protection of the authorities and society, friends and relatives.

By and large, this is not the first night of horror in Germany. From today's scathing epithet, an association with the "night of long knives" suggests itself. So the Germans christened the massacre of Adolf Hitler, who had become entrenched in power, over SA attackers headed by Ernst Röhm, who had come out of control. It was this summer 1934 of the year. Four years later (in the fall of 1938), the horror of the night will repeat in the Jewish pogroms. The coordinated attack by the Nazi authorities against the Jewish population would later be called "Crystal Night" or "Night of Broken Storefronts."

The tragic events of the last century have brought people, undoubtedly, more blood and suffering. In addition, they were inspired by the authorities, and not the unbridled crowd, crazed from impunity. However, German journalists formed historical associations in a logical puzzle, and an epithet was born, albeit somewhat ambiguous.

It seems that the parallels here arose because of the actions of the authorities. Only in the new century did it not initiate violence, but by its policy created the conditions for it. Later, the current German government frankly will take the side of the rapists and robbers, and not those poor German women who suffered in the "night of long hands".

The picture will be repeated and even burdened with new vile events. Here is Dortmund in western Germany. Here, three immigrants from North Africa stoned two transgender women. And this is a small border town of Weil am Rhein in Baden-Württemberg, known for its famous bridge of the Three Countries (connecting Germany with France and Switzerland). Here Syrian migrants raped two underage girls - 14 and 15 years.

The strongest shock caused a crime in the German capital - Berlin. Here, migrants kidnapped and thirteen-year-old girl from the family of Russian-speaking Germans raped 30 for hours. The capital investigators will then interrogate the victim, but will close the case "due to the absence of corpus delicti." The official representative of the German police will explain the RIA News: “According to the investigation, in this case there was no kidnapping or rape. All necessary measures were taken as part of the investigation, the case is closed. ”

The uncle of the victim, who identified himself as Timofey, will tell the Zvezda TV channel the details of the interrogation. “Lisa was interrogated alone, alone, without the presence of adults, lawyers or a child psychologist. Then after three hours they took out, they say: "Well, repeat what you told us." And she said: "Yes, I wanted it myself, I asked them myself."

Police washed their hands. (Like - "What kind of rape is there? It asked for itself.") This version does not hold water. After all, Germany, together with 47, other countries signed the Council of Europe Convention on the Protection of Children against Sexual Exploitation and Sexual Abuse (entered into force in 2010 year). The document is written very clearly: “Countries that ratify the Convention agree to criminalize sexual acts with children who have not reached the age of sexual consent, regardless of context.” That is, Liza does not have the age of “sexual consent”. The police are simply obliged to impose responsibility on adult rapists. (By the way, boasting defloration girls in the common video on the Web).

Relatives insist: Liza and her parents (they do not give media interviews) were intimidated by the fact that social services can take the child. About this on the radio station RSN said on Monday the aunt of the victim.

Information about the misfortune that happened with the Russian-speaking girl was the first to publish the website Genosse.su of the International Convention of Russian Germans registered in Berlin. Other German media were not interested in either the rape story itself or the details of the police investigation. A few days after being published on Genosse.su, Russian television channels told about the incident with the girl.

From them, viewers also learned about the spontaneous rally gathered by 200 people in the Berlin district of Marzahn, where immigrants from Russia live. Outraged people demanded a thorough investigation - both the crimes of migrants and crafty police actions. However, they were not heard by the authorities and are now planning 23 January to go to the center of Berlin, to the Office of Federal Chancellor Angela Merkel, to the demonstration "Against violence." This action is supported by the “International Convention of the Russian Germans”.

Only now the German media have paid attention to the protest. Deutsche Welle Media Corporation blamed Russian television for it. According to the authors of DW, the plot of the incident with the girl Liza "was shot in the spirit of Russian propaganda and serves to incite ethnic hatred." It is noted that “in Germany there are up to six million Russian-speaking residents, many of whom watch Russian television. Some seem to trust Russian television more than German or German authorities. ”

Deutsche Welle gave the floor to lawyer Martin Lutle. He bluntly stated: “Russian television has switched to the invisible“ red line ”in Germany. The lawyer informed about his appeal to the prosecutor’s office in Berlin “with a motion to verify the legality of the story about a girl allegedly raped by migrants in the capital of Germany, which was broadcast on the Russian First Channel 16 in January.” By the way, frightened burghers also did not learn about the attack in Dortmund of female transgender people from the German media. The first was reported by the Israeli newspaper The Jerusalem Post.

Having poured out the entire supply of their indignation, DW rightly remarked that "Russians in Germany, watching Russian television, have an alternative - to" look outside or listen to the German media. " It remains unclear: what is the difference between the pictures through the “German window” and on the Russian TV screen? We'll see.

What can be seen from the "German window"?

The excesses of the migrants worried the German politician. The former head of the Christian Social Union Party and the Government of Bavaria, which is now part of the ruling coalition, has set an ultimatum to Chancellor Angela Merkel. In an interview with the Suededeutsche Zeitung, he demanded Merkel reduce the number of refugees in the country by the end of March. Another Bavarian politician, incumbent Prime Minister Horst Seehofer, threatened the German Chancellor with a court if "certain legal relations are not restored on the German border within two weeks." A statement about the need to reduce the number of refugees arriving in the country was made by Vice-Chancellor of Germany Zigmar Gabriel. The country's finance minister, Wolfgang Schäuble, called on the authorities to protect the German borders from the uncontrolled access of migrants.

“Angela Merkel should change her position, otherwise Germany and Europe will face disastrous consequences,” Edmund Stoiber urged the Germans. He is not the first to speak of a national catastrophe. Priority here for sociology professor Gunnar Heinzon.

Professor Heinzon, back in the distant 2003 year, predicted the current influx of migrants to Europe. (Frau Merkel then only made her way into power, jostling in her front, and the terrorist group ISIL, which provoked a wave of refugees, was not mentioned.) In the book “Sons and World Domination: The Role of Terror in the Rise and Fall of Nations” that the main threat in the first quarter of the twenty-first century will be for Europe the “youth bubble” in the Middle East and Africa. Unsettled youth will move in search of a better life in the Old World.

The first such wave happened last year. Not so much refugees from the war (usually old people, children, women) than young people seeking adventure came to the continent. Today they constitute the overwhelming majority of migrants. The book of Professor Heinzon was again removed from the shelves and began to read. It turned out last year's influx of refugees - only flowers.

According to Gunnar Heinzon, the “youth bubble” in Africa and the Middle East will be fully inflated by the year 2025. Not only the professor noticed the trend. The youth of Germany also “looks through the window” and reacts to what they see. Every year, under 200, thousands of young Germans leave for permanent residence in Australia, New Zealand, Canada. They do not believe that the power that meets migrants with buns and open arms will protect the interests and values ​​of the indigenous population.

The January incidents in German cities completely confirmed these concerns. Not respectable politicians came to the defense of the humiliated, robbed, raped, more often they were marginal organizations of the nationalist and radical sense. Because the question of the Polish Christian magazine was not so inaccurate.

Professor Kokhnovsky met the expectations of Polonia Christiana. He also sees a threat against which the Alternative for Germany (a conservative and Euro-skeptical political party that initiates mass protests) still seems moderate to everyone. As Roman Kokhnovsky noted in an interview with the magazine, the current crisis was caused by the policy of the ruling coalition. It includes the largest parties in Germany, which today there is no effective parliamentary opposition. This provokes the activity of radical parties and their growing support in society. Kokhnovsky cites the example of the growing popularity of German skinheads. This brings to his memory direct analogies with the thirties of the last century. The Polish professor does not exclude that "the growing crisis with migrants will help political extremists."

This is how the world looks today “through the German window”. The helpless drift of the Berlin authorities through the waves of the migrant crisis is alarming. Everything suggests that the trouble that happened to German women and girls this January may happen again. Attempts to hide it only confirm such fears and add new uncertainty to the future of the Old World ...

Ctrl Enter
Noticed oshЫbku Highlight text and press. Ctrl + Enter
We are
Raped Europe. What awaits Germany and other countries after the "fun night in Cologne""Trouble" of the Promised Land. African immigration to Israel
94 comments
Information
Dear reader, to leave comments on the publication, you must to register.