January 21 2016
30
Welcome to the crisis economy, says The Wall Street Journal. Steven Fiedler predicts the entire planet unprecedented economic and political instability. Russia will be particularly affected: all the troubles hit her yesterday, at the same time. Here and the sanctions of the West, and the debt dependence of companies that have no money, and the economic downturn. 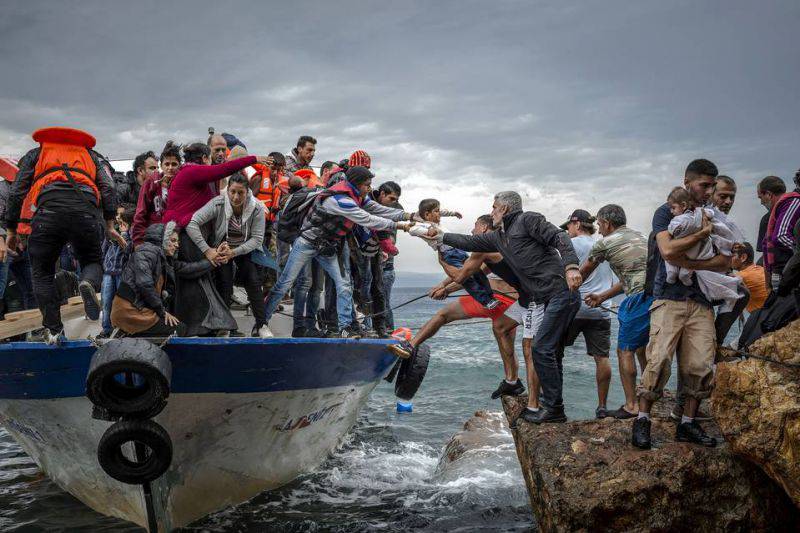 Anxiety, consisting of a myriad of sources of concern, has swept global financial markets and political capitals, writes in "The Wall Street Journal" Stephen Fiedler. Here and the weakening of the Chinese economy, and the collapse in oil prices, and the escalation of tensions in the Middle East, and the refugee crisis in Europe, and the likelihood of financial chaos, which can be caused by tightening monetary policy in the United States.

Numerous political and economic “hot spots” may in the near future undermine the already “anemic” growth of economies. Politicians, bankers and big businessmen who gather in Davos at the World Economic Forum will not have to discuss any one problem, as was the case with the eurozone crisis in 2010 or Russia’s intervention in Ukraine in 2014, but a number of crises.

The “earthquake” began with the financial crisis of 2008 in the United States, and then swept through Europe. Now it finally shook China. And what is happening there will come to countries and companies from Africa to South America, which thrived on meeting Chinese demand for raw materials.

The first weeks of 2016, the author recalls, were marked by convulsions of financial, energy and commodity markets.

And then there is growing geopolitical uncertainty. She is everywhere.

The conflict in the Middle East is exacerbated by an ever more pronounced "alien" war between Saudi Arabia and Iran.

The number of refugees heading for Europe is growing.

The West is in panic over terrorists.

In most of Europe, movements that are against political and economic integration have become popular.

Nuclear tests in North Korea and territorial disputes in the South China Sea show that Asia is not immune from shocks.

Will the political leaders of the world cope with this?

Many critics of the "timid" policy of Barack Obama could call this situation "the emergence of a vacuum that others have tried to fill." But where do such aspirations lead? Chinese leaders have been unable to tame "financial chaos." German Chancellor Angela Merkel and other European leaders are unable to cope with the millions of refugees in Europe. President Putin’s “adventures” in Ukraine led to nothing. Moreover, Putin gave rise to new risks, "sending Russian armed forces to Syria."

“It can be argued that we are guilty of the deeds of the past, but not of what gave rise to the risks today,” he said, speaking of this very “part of responsibility”.

A big role in the impending new crisis, journalist Stephen Fidler assigns to China: after all, "the shaky Chinese economic expansion" also "complicated the geopolitical perspectives."

According to the author, China "fell victim to the world cycle." At the same time, this country “is undergoing complex structural transformations”. The economy of the PRC is based largely on investment and production, and there is a “bias”: export orientation with low domestic consumption.

The Chinese authorities are now faced with a dilemma: maintaining growth rates with inevitable strong inflation, but the latter will cause a chronic imbalance in finance, including “heavy debts of Chinese companies and state-owned enterprises”. And this path will lead to "further trouble." Trust in the Chinese politicians of the international community is directly dependent on the line that they will adhere to in the very near future. Chinese decisions will affect the economic fate of the world.

“Other signals” that can be used to guess the looming crisis consist in easing global demand. The fall in oil prices and commodity prices in general was a reflection of excess supply only, and stock markets tend to rise on the optimistic assumption of stimulating growth with cheaper raw materials. But this time it was different: raw materials became cheaper, but world stock prices went to the bottom. And this proves that investors see the problem in weakening demand.

Fuel to the fire adds a strong dollar. Trillions of debts denominated in US currency were issued to foreign borrowers, both to governments and private companies and banks in emerging economies. As a result, someone shines default.

And to whom? Here is one place where all problems can happen at the same time: Russia.

This country is suffering from Western sanctions, carried out because of the intervention in the situation in Ukraine. Now oil prices are hitting it: they are already below thirty dollars per barrel. The second year Russia is tormented by an economic recession. Perhaps ahead of her financial crisis. After all, its companies and banks are hardly able to pay off the debts expressed in dollars that they once collected.

Putin’s popularity still depended little on economic failures, the analyst notes. According to him, this is a matter of propaganda: the Russian media "help" his administration to "manage." But how will Putin react to new shocks? Maybe the saber will start again. weapons? Or raise a nationalist theme? Maybe he will decide to return Russia to the global economic order? The author is at a loss, he is "incomprehensible."

Some experts, for example, Sir Lawrence mentioned in the text, believe that Moscow has already excessively puzzled itself in Ukraine and in Syria, and it can hardly withstand the heat of military actions there.

The “torments” of commodity economies like Russia have spread to Latin America. Brazil, the region’s largest economy, is also in its second year in the red. A deep recession threatens further political chaos as the state-owned oil company Petrobras is accused of corruption. Two major credit rating agencies have already lowered the Brazilian debt rating to "junk".

Immediately unfolding and the political crisis. Riyadh and Tehran will be central to any solution to the conflict in Syria. Most likely, Iran and Saudi Arabia will only worsen the already bad relationship - precisely because of the Syrian issue. This will predetermine another round of humanitarian catastrophe, which is already driving millions of refugees to neighboring Turkey, to Lebanon and Jordan. Tens of thousands of refugees rush to Europe every week. All this can "last."

Against the background of migrant flows, European governments "look pitiful." Frau Merkel fell out of favor with her colleagues and now, apparently, she will try to “close” the door to the migrants. Freedom of movement in the Schengen area was a big question. Some governments seek to close the borders. This is a serious test for European integration. In addition, a referendum has been scheduled in Great Britain to preserve the country in the European Union. It will probably be held this year.

And in the US, billionaire Donald Trump rushes to power. (The journalist does not even find it difficult to describe him.)

Not all of the listed events will have long-term consequences, the author points out. But even if some sources of “unpredictability” disappear, all the same, the economic and geopolitical perspectives in 2016 year seem to Fidler “much more unstable” compared to the order that existed on the planet during the previous decades.

Not a single oasis found in the desert future crises, Mr. Fiedler. It seems that the planet has no hope of getting rid of political and economic catastrophe.

However, the analyst hardly set himself the goal of finding a way out. Ungrateful this occupation - futurology. Today, finance ministers in other countries do not dare to come out with forecasts and rewrite "pessimistic" scenarios of state budgets several times a year.

It is appropriate to recall, however, the popular Western theory of the production changes in the world that may occur in the 21st century. Some economists are still in 2012-2013. It was suggested that China as a “global factory” would not last long: a country that can only stamp consumer goods on someone else’s templates and steal or copy technologies has no intellectual potential, which means there is no industrial future. In addition, the price of labor in China is constantly growing, and soon Chinese goods will lose their competitiveness. With an authoritarian and inept government, the Celestial Empire will plunge into the abyss of crisis, and production will move to where it had previously left, primarily to Western Europe.

Considering the invasion of migrants in the EU, who would rather work and not sit on benefits, we note: this hypothesis looks quite real. She could become part of a new reality if the world would at least gradually abandon the destructive habit consume at all costs. In this case, the existence of the Chinese "world factory", poisoning the air and producing products of low quality, would not be justified.

And then a new geopolitical crisis will break out. For the question will arise: what should all those Chinese do that will remain without work?

Observed and commented on Oleg Chuvakin
- especially for topwar.ru
Ctrl Enter
Noticed oshЫbku Highlight text and press. Ctrl + Enter
We are
Refugees from Syria. Will Russia accept immigrants from the Middle East?Hybrid war in the economic sphere
30 comments
Information
Dear reader, to leave comments on the publication, you must to register.