January 20 2016
145
The affairs of a united Europe are sad. The endless entry into the EU countries of migrants seems to have been an insoluble problem for the liberal democrats. Neither Germany, nor Britain, much less Poland will not be tested by refugees. The Minister of Transport of Germany said that the time had come to lock the borders of Germany on the castle. The Minister of Internal Affairs of Germany also spoke out. He believes that the flow of refugees should be limited. In Britain, meanwhile, passed a survey of public opinion. As a result, it turned out that more and more British support the country's withdrawal from the European Union. Poland said that it took almost a million immigrants only from Ukraine. The point in the "migrant case" put the head of the European Council, Donald Tusk. With a sigh, he explained that in a couple of months the Schengen zone could collapse.


Recall the crisis due to the influx of illegal migrants wishing to obtain refugee status, broke out in the European Union in 2015 year. The flows of migrants were compared with the mass movements of citizens during the Second World War and after it.

A huge number of migrants (most of them) come to the EU from Syria, where the civil war does not stop. According to the United Nations, in the coming year, migration flows to Europe can double. The EU authorities do not agree with the UN forecasts and insist that a triple increase in the influx of migrants should be expected.

In the German political newspaper Münchner Merkur statements were made by the Minister of Transport of Germany Alexander Dobrindt. He criticized Angela Merkel’s policy and called on the Chancellor to “close the borders.”

According to him, the closure of the borders of Germany is "the most important issue for our country and for the allied states."

The minister demanded to change the political course of Angela Merkel, who was elected by her with regard to refugees, reiterated the thesis about the need to close the borders of the country and advised the entire government to “prepare plan B”.

According to the federal official, Germany has already "objectively" reached the "maximum load". Migrants do not have time to “integrate” into society, and politicians should not forget about the existing restrictions on the labor and housing markets, as well as the growing burden on the social sector. The continuation of the destructive policy will lead to the fact that migrants will put Europe "on its knees". Therefore, Merkel should send a "clear signal to the whole world." The signal is: "In search of a better life, not every person can come to Germany."

Dobirndt is convinced that the situation should be changed quickly.

Dobrindt is echoed by another German minister.

The opinion of the Minister of the Interior of Germany, Thomas de Maisiere, appeared in «Tagesspiegel».

Federal Interior Minister Thomas de Mezieres (CDU) warned of social conflicts that will escalate while maintaining an influx of refugees.

Speaking at a joint conference of the World Council of Churches and the United Nations in Geneva on refugee issues, de Mezieres said that EU authorities should seriously fear for the safety of the local population. The aliens simply threaten the locals.

The Minister of the Interior made it clear that Europe’s ability to assimilate more and more new refugees is limited. At the same time, the Minister criticized the line of conduct of other EU countries, aimed at a complete refusal to accept refugees. Many "European partners", unlike Germany, have not made their contribution to solving this problem. And the minister called for a pan-European strategy to overcome the crisis.

According to him, it is necessary to “urgently reduce” the number of refugees. The EU should better protect its external borders. In addition, the Minister of the Interior demanded tougher actions against smugglers and various businessmen engaged in transporting migrants across the Mediterranean Sea and on land.

In another speech, at the annual reception in the Catholic Diocese of the Ruhr, Thomas de Maiziere called for greater respect for people towards each other. According to him, “rudeness” has returned to German society, and “this is bad” for rallying people.

In this speech, de Maizier also spoke of the need to hold a debate on the limit of the number of refugees and the possibility of their integration.

Not silent, and Britain. Here the society has just started talking. The people are set to "Brexit" - exit from the European Union.

The latest sociological survey shocked London: it turned out that many British people want their country to leave the EU. More than half of the respondents are ready to break off relations with Brussels right now - forever. The “anti-NATO” aspirations continue to grow: they were reinforced by the recent Parisian attacks and the endless crisis with migrants, which reached the “sex attacks” in Cologne.

On a survey conducted by «Mail On Sunday», told the popular newspaper "Express". These studies show: 53% of Britons are ready to vote for the exit of Britain from the EU. 47% believe that it is necessary to remain in the EU after all.

Last May, a poll organized by the same sociologists showed almost the opposite result: 54% of the British were in favor of maintaining EU membership, and 46% were going to vote for Brexit.

The latest result indicates that the public perception of Brexit has changed, receiving as much as seven percentage points of profit in eight months.

For Prime Minister Cameron, this result turned out to be a “shock”, since he doesn’t deal with leaving the EU, but with a kind of “rebranding” of the UK as an EU member state, trying to “free” the country from certain Brussels decrees and wanting to create an “emergency brake” on migration to the UK.

Expressed on the topic of refugees and Poland.

At discussions in the European Parliament, devoted to the migration problem, spoke Beata Szydlo, Prime Minister of Poland. According to her, Poland took about one million people from Ukraine.

“I have a strong sense of responsibility for what is happening in Poland and Europe,” she quotes "Lenta.ru". - You are talking about migration and migrants. Poland received about one million refugees from Ukraine, a million that no one wanted to help. ”

According to the Polish Foreign Office, citizens of Ukraine received about 2015 thousand Polish visas in 930 in the year. However, only two Ukrainians in the past year received refugee status in Poland.

The point in the "migrant case" put the chairman of the European Council, Donald Tusk. With a sigh, he explained that in a couple of months the Schengen zone could collapse.

This is not a joke or fake. Mr Tusk’s statement on January 19 was published by the agency Reuters. 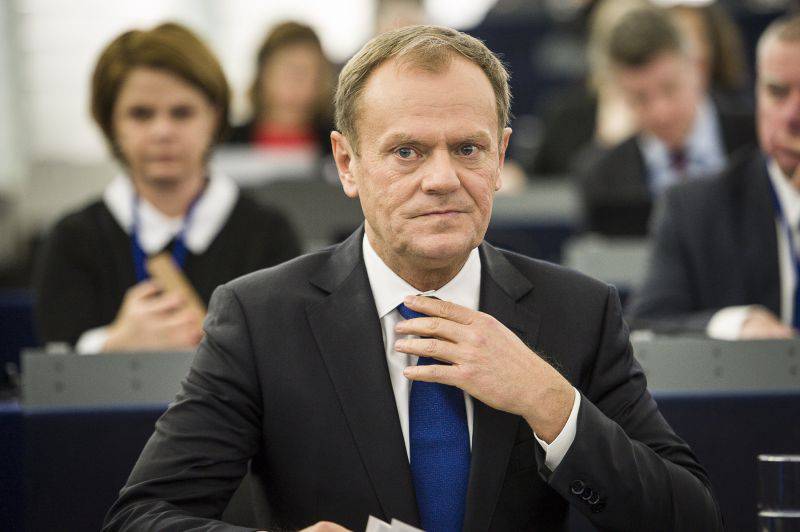 According to Donald Tusk, Europe has no more than a couple of months left to take control of the migration crisis. If the EU does not do this in such a period, the Schengen zone will simply collapse from its free movement.

Tusk bluntly stated that if the EU cannot exercise proper control over its external borders, then as a political project it will “fail”.

As long as the German ministers complain about the erroneous political course of Angela Merkel, who welcomed migrants, and urged to somehow reduce the number of arrivals, or even close the borders of the country, launching "Plan B", the Poles with sighs tell about the millions of Ukrainians they have announced, and the British "Vote" in polls for "Brexit".

Donald Tusk, who chairs the European Council, only takes two months to solve the problem of the EU migration crisis.

Well, what will happen if the problem is not solved?

There will be nothing. Neither Schengen nor the EU.

Ctrl Enter
Noticed oshЫbku Highlight text and press. Ctrl + Enter
We are
Results of the week. "Guys let's be friends!"What to do with the refugees? Eastern Europe to host thousands of Africans and Asians
Military Reviewin Yandex News
Military Reviewin Google News
145 comments
Information
Dear reader, to leave comments on the publication, you must to register.