January 20 2016
29
France and England, Russia's allies in the Entente, believed that the Russian Empire had “inexhaustible” human resources and tried to exhaust the reserves of Germany at the expense of the Russian “cannon fodder”. When the Russian government in December 1915 tried to argue that Russia's human resources were coming to an end, the western partners of Petrograd quite unequivocally threatened to stop supplying us with military materials. Although Russia paid for everything forward in gold and at a very high, unfair price. Russia had to call for the term 1918 of the year, while in France, in which they constantly complained about the depletion of human resources, they still called for the term 1916.

The Allies did not see and wanted to see that the economic structure of the agrarian-industrial Russian Empire is very different from the industrialized, industrialized Britain and France. In Russia, the separation from the national economy of millions of healthy men was more painful than in Western European countries. Every call in our country caused a terrible wound, violated the stability of the country, its economy.

At the same time, the allies of Russia not only constantly demanded help when the German corps attacked the French front, but also invented a new way to use the "inexhaustible" human resources of the Russian Empire. At the end of 1915, a representative of the French Senate military commission, G. Dumerg, arrived in the Russian Empire. He proposed to the tsarist government to send 300-400 thousand Russian soldiers to the Western front, to France, in exchange for the lack of weapons and ammunition for the Russian army. Moreover, Russian soldiers were offered to be sent without officers and organizational personnel. Like Moroccans, Senegalese, and other soldiers from the colonies, they were to form shock companies of French infantry regiments under French officers.

The project was monstrous. Russia was asked to send hundreds of thousands of warriors (including regular replenishment) for slaughter, as cannon fodder. The Russians were planned to be thrown at attacks on the most difficult sections, saving the lives of representatives of “civilized” Europe.

For all its compliance, the Russian government rejected this terrible project. However, the French still managed to partially succeed. They insisted on sending Russian troops to their front. True, in a much smaller number with Russian commanders. Thus, Russia not only held the front, one fighting the armies of Germany, Austria-Hungary and Turkey, but also had to help France, England, Belgium and Serbia, who defended the Western Front. At the same time, England and France had huge colonial empires. Belgium also had large colonies in Central Africa. The United States economically propped up England and France. However, Western countries required Russian soldiers.

General Alekseev, instead of sending already existing and fired units, decided to form “special infantry regiments”, entirely formed, made up of separate mouths, taken from existing parts. In January-February, 1916 was formed and sent to the Western Theater of War 3 "special brigades". In the same year they planned to form more 5 brigades. Each brigade was a two-track squad.

In January, the 1-I special team was formed under the command of General Nikolai Lokhvitsky. She was sent to the Western Front through Siberia, Manchuria, the Indian Ocean, the Suez Canal and landed in Marseilles in early May. 2-I special team of Michael Diterikhs was sent through Arkhangelsk, the Arctic and Atlantic oceans and was landed in Cherbourg. In the summer of 2-th brigade from France transferred to Thessaloniki. In June 1916, the formation of the 3 Special Infantry Brigade under the command of General V.V. Marushevsky was started. In August 1916, she was sent to France through Arkhangelsk. Then the last 4-I Special Infantry Brigade, headed by Major General M. N. Leontiev, was sent to Macedonia. She sailed from Arkhangelsk in mid-September and arrived in Thessaloniki in October 1916. In the spring of 1917, an artillery brigade and engineer battalion arrived in France. That was how the Expeditionary Corps of the Russian Army in France and Greece was formed, with a total strength of 750 officers and 45 thousand non-commissioned officers and soldiers. The Russian corps was subordinate to the Russian representative in France, General Palitsyn, and in operational terms to the French. 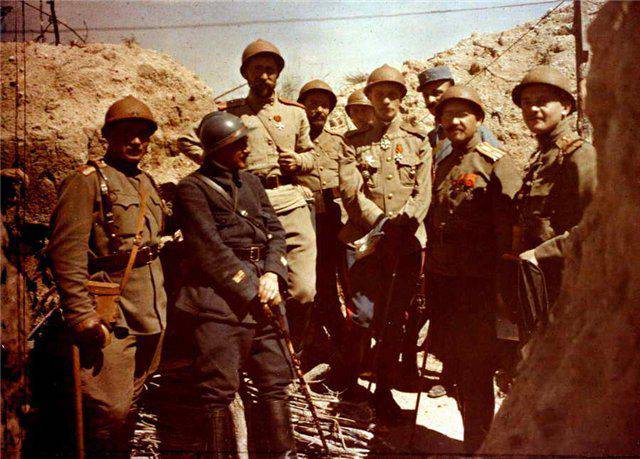 Summer 1916 of the year, Champagne. The head of the 1 Brigade, General N. Lokhvitsky, with several Russian and French officers, bypasses the positions

The Russian brigade of Lokhvitsky who fought in France did not participate in the battles of Verdun and Somme. She was sent to a relatively quiet area in the Champagne-Ardenne region as part of General Gourot’s 4 Army. True, the Russians immediately turned the calm area into an active one. Constantly carried out reconnaissance, attacks, the Germans provoked to respond. Skirmishes began. Guro noted the “unparalleled courage” of the Russians. Newspapers wrote about the Russians as real heroes.

The French society greeted the Russians enthusiastically. However, the pettiness, the selfishness of Europeans immediately manifested itself. The French even calculated the power of the Russian soldiers at the expense of Russia. The soldiers were in danger of starvation. Gained General Ignatiev, through whom the money went to pay for the supply of military materials. Palitsyn reported to the emperor about the situation: “Without him, I and the troops subordinate to me in France would have died of hunger long ago.” In addition, the Allies sprayed Russian corps on two fronts. The 1-I and 3-I special infantry brigades were sent to the French front in Champagne, and the 2-I and 4-I - to the Salonika front, in Macedonia. The Russian Stavka was indignant when the Allies begged Russian soldiers; it was understood that they were desperately needed to save France. However, the critical moment passed, and the French command did not want to see the whole Russian corps in the country, and then the army. Russian troops were divided to reduce their importance in the overall victory. Therefore, the Russian command stopped the further dispatch of our soldiers to the Western theater.

In April, 1917, the Russian troops distinguished themselves in the battle on the river. Ena, in the area of ​​Reims. 1-I special brigade took the fort of Brimont, repelled several enemy counterattacks. 3-I brigade pulled ahead of the French, attacked the redoubts of Pork Head, repulsed a powerful German counter-strike. The French were delighted: "the Russians were very bravely chopped." Newspapers extolled the feats of Russian soldiers. True, the achievements of the Russian troops were the only ones. The Germans waited and repelled the Allied offensive. The Allies suffered heavy losses: 137 thousand French, 80 thousand British and 5 thousand Russian. The 1-I and 3-I special infantry brigades were taken to rest in the military camp of La Curtin near Limoges, where they were combined into the 1-nd special division under the command of Major General Lokhvitsky.

In September, 1917, due to the worsening of its position and under the influence of news of the revolution in Russia, soldiers of the 1 Russian Brigade refused to submit to the Russian and French authorities and demanded to return home. The rebellion was suppressed by the forces of the Russian units with the participation of the French gendarmerie using artillery. During the 3 day battles, several hundred soldiers from both sides were killed and wounded. The instigators of the rebellion were shot.

After the October Revolution, the French authorities disbanded the Russian Corps. Soldiers and officers were asked to either fight further, but in the French troops, under French command, or go to work in French enterprises and go to colonies in North Africa. Most chose to go to work in civilian enterprises, some were sent to Africa - mostly activists were soldiers' committees and those who fell out of favor with the French. In total, about 9 thousand people got to Algeria. The soldiers were divided into small labor detachments and teams, spread out far from each other, often in remote and sparsely populated areas.

Of those who were ready to fight, formed the Russian Legion (originally 300 soldiers, then the number grew to 2 thousand people), led by Colonel Georgy Gotua, who was included in the Moroccan division. It consisted of the Foreign Legion, the Algerian arrows, the Zouaves (African light arrows) and the Russians. This division was thrown into the thick of it, and it suffered terrible losses. Therefore, it was replenished with Senegalese, Malgash and Vietnamese. In addition, Polish soldiers from special brigades entered Polish forces in France.

In Algeria, the Russians were driven to the mines in the quarries. They were actually in the position of convicts. Worked in unusual natural conditions, in the heat, there was not enough water, fed disgustingly. Many died of hunger and disease. In fact, the Russians were forced to join the Foreign Legion. There was only one way out, in order not to die, you had to go to the mercenaries. Sign contract. These soldiers fell into the Moroccan division, but not into the Russian Legion, but into other units. As a result, they served together again, but some wore French or uniforms adopted by the colonial units, and the Russian Legion had its own. The Soviet government protested against the use of the Russian form, since Soviet Russia was at peace with Germany. The French have agreed. However, the soldiers almost revolted and refused to change their clothes. Declared - they signed contracts to serve in the Russian Legion.

In the future, the Russian Legion passed Lorraine, Alsace, Saar and entered Germany. He was assigned to occupy the German city of Worms, on the Rhine. Gotua, at the head of the legion, was the first of all the allied armies to break the famous "Hindenburg Line" in the battle of 1 - 14 in September of 1918 of Terni Sorni and joined Mainz. In these battles, the Russian Legion suffered heavy losses. At the end of December 1918, the Russian Legion from Germany was transferred to Marseille, and from there to Novorossiysk. At the beginning of 1919, the Legion was sent to General Denikin's Volunteer Army. A part of the soldiers subsequently went over to the side of the Red Army. The remaining legionaries formed the 1 Caucasian Caucasian Regiment, which until the end of the Civil War fought on the side of the White Army.

At the same time, the French detained many Russians. Those who signed the Foreign Legion contract were to serve 5 years. They were left to serve. The soldiers of the labor battalions, who worked in the French rear, were also detained. The first trains with Russian soldiers from France to Russia went in the spring of 1919, they were trains with people with disabilities who were injured in the war. Some soldiers, to get to the Motherland, were recruited into the white armies, sailors on ships. The rest was rescued by the Soviet government. It arrested the French mission for espionage and agreed to exchange it for Russian soldiers stationed in France. 20 April 1920, the Soviet and French governments in Copenhagen signed an agreement on the exchange of citizens. By the end of 1920, the repatriation was completed. 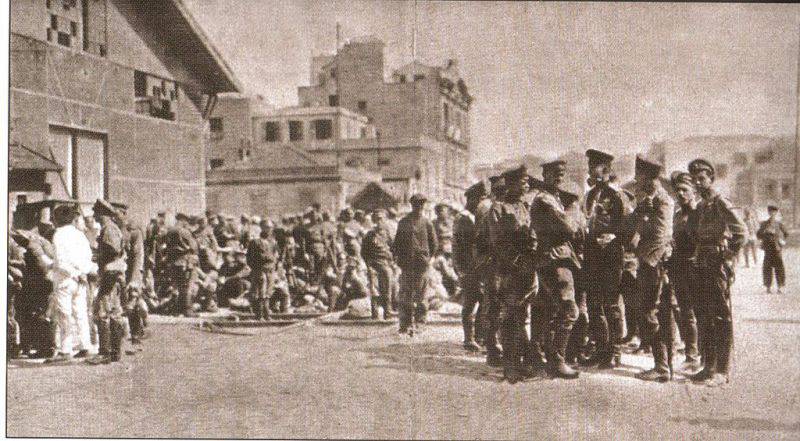 Ctrl Enter
Noticed oshЫbku Highlight text and press. Ctrl + Enter
We are
The development of the military-industrial complex of the Russian Empire in the years of WWIRussian fleet in the First World War and its combat effectiveness. Part of 5
Military Reviewin Yandex News
Military Reviewin Google News
29 comments
Ad