January 20 2016
68
Towards the end of the forties, Soviet tank builders faced an unpleasant problem. Further increase the level of protection and firepower of heavy tanks It was connected with the growth of the combat mass, which, in turn, imposed serious restrictions on various aspects of the operation of equipment. Exceeding the conditional threshold of 50 tons threatened with a sharp reduction in strategic and tactical mobility, as well as other troubles, at least hindering the operation of equipment. For this reason, all new heavy tanks were developed with such limitations in mind. The new approach resulted in several new projects: “Object 730” (future T-10), “Object 752” and “Object 777”.


The creation of a promising heavy tank that fits into existing limitations on combat weight began in June 1952 of the year on the initiative of the Ministry of Transport Engineering. The developer of a promising armored vehicle was appointed SKB-2 of the Chelyabinsk Kirov Plant. Initially, the work was led by M.F. Balzhi, but later he was replaced by PP Isakov. Requirements for the new project were logical and expected. It was necessary to increase the level of protection and firepower of weapons, but it was necessary to meet the established limits in size and weight.

Already by the end of 1952, Chelyabinsk engineers completed the creation of the first draft design draft. In the middle of 53, the project was ready for demonstration to industry leaders. It is noteworthy that by this time a single project was divided into two "branches". As part of its development, different ideas were proposed that could not be implemented during a common project. As a result, one development was divided into two. So there were projects with indexes "Object 752" and "Object 777". Consider the first of them in more detail.

Side view and cut of the 752 Object

When creating the 752 Object project, it was proposed to use various new ideas and developments with which it was possible to provide the required characteristics, but to keep the mass at the level of existing samples. From the point of view of weight, the heavy tank EC-3 with its 46,5 T was taken as a kind of standard. Such limitations led to the need to use different original ideas, with which the EC-3 could be surpassed by characteristics, but not by weight.

Analysis of different ideas showed that the most promising and convenient for use in practice is the proposal to use the original differential booking. Installation of armor parts of various shapes and thicknesses has long been used in tank building, but the staff of SKB-2 decided to rework this concept. Prospective tanks should have not just different parts with different thickness. In order to optimize performance, all major parts had to have a complex shape with variable thickness. Only in this way it was possible to ensure high characteristics of homogeneous armor without a significant increase in its weight.

When developing the 752 Object project, it was decided not to use other revolutionary new ideas besides the original differentiated booking. From the point of view of the layout and other main features, it was a typical Soviet post-war tank of a heavy class. In front of the hull, behind a powerful frontal armor barrier, there should have been a driver. Behind him housed the fighting compartment with a swivel tower. Fodder, as in other Soviet tanks, was given under the engine-transmission compartment.

It was proposed to assemble the hull of a promising tank from cast and rolled parts of various sizes and shapes. Through the use of casting, it was possible to manufacture a number of parts of complex shape and variable thickness. With the help of the correct combination of thickness and shape, first of all, the angles of inclination to the vertical, it was proposed to provide a sufficiently high level of protection. Thus, the frontal part of the body had a curved parabolic shape (in a section along the vertical plane) and a thickness from 90 to 215 mm. Relatively thin parts of the parts were located at large angles of inclination, which is why they hardly differed from the thicker ones in terms of protection. 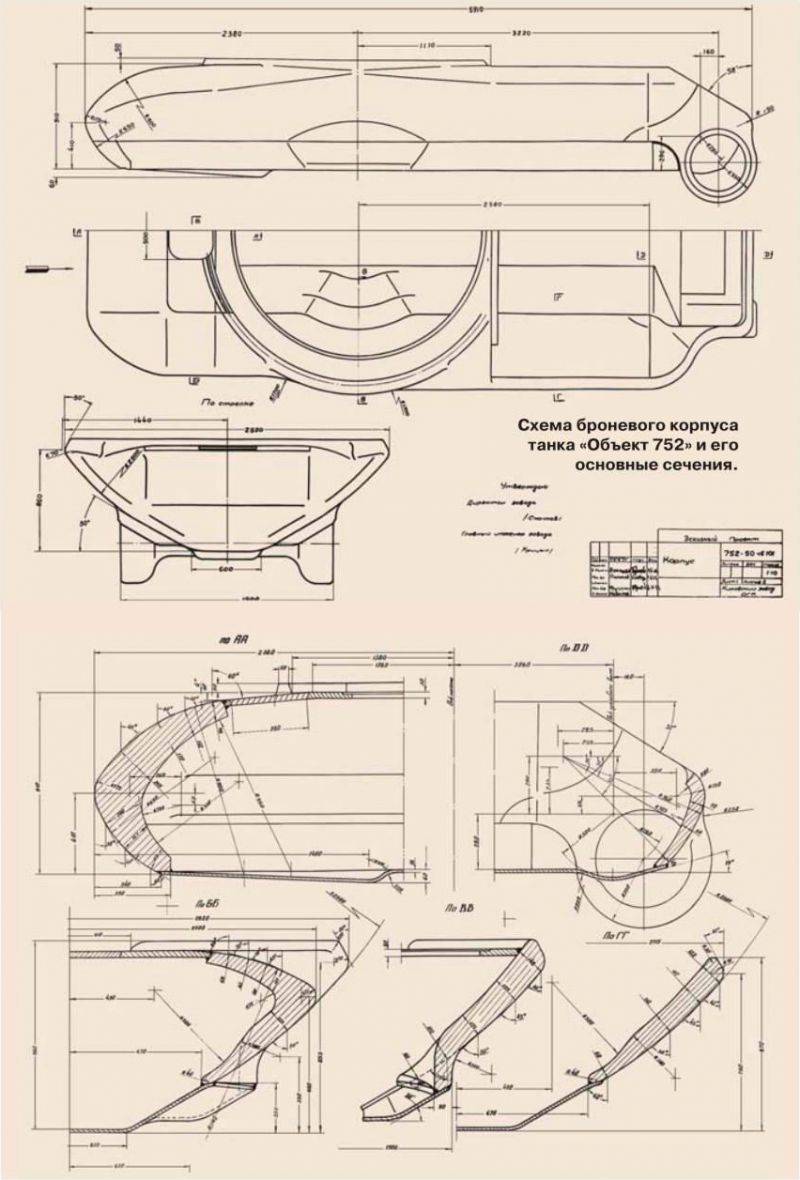 The middle part of the body had a V-shaped section with collapsed sides. The thickness of the upper side parts reached 125 mm, which in combination with large installation angles ensured a high level of protection. According to reports, a similar design of the sides allowed to withstand a hit of German-made 88-mm anti-tank guns. The lower parts of the sides were thinner - only 60 mm. The proposed design of the sides allowed not only to increase the level of protection, but also to maintain sufficiently large internal volumes available for crew accommodation, weapons, ammunition, etc.

The tank tower "Object 752" in its design resembled the aggregates of the previous domestic heavy tanks. Its basis was a molded part that performed the functions of the forehead and sides. It was joined by an additional upper section, which increased the volume of the fighting compartment. The thickness of the frontal part of the turret reached 260 mm, the sides and the stern - from 115 to 150 mm.

The power plant of the tank was proposed to be built on the basis of the B-12-6 diesel engine, already used on some heavy armored vehicles. This engine developed power up to 750 HP. and could provide sufficient mobility for a heavy tank. With an estimated combat mass of 45,3 t, the maximum speed on the highway was to reach 50 km / h. Cruising on the highway with additional tanks, according to calculations, was 250 km.

The main elements of the tracked undercarriage of the “752 Object” were road wheels with an individual torsion bar suspension, six on each side. The guide wheels were mounted in the front of the hull, the drive wheels - in the stern. There is information about the development of alternative chassis with other units. In this case, the tank had to be equipped with a hydraulic suspension. 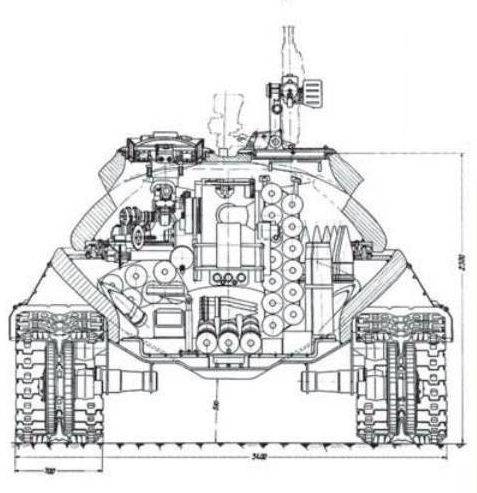 The heavy tank "Object 752" could become the first domestic combat vehicle equipped with the latest M-62Т2 (GRAU 2А17 index) caliber 122 mm. This gun received a rifled barrel and hydropneumatic anti-recoil devices. Due to the relatively long barrel (about 46 calibers), a high initial velocity of the projectiles was achieved. Thus, the armor-piercing shells left the barrel at a speed of the order of 950 m / s, and the initial speed of the sub-caliber reached 1500 m / s.

The project offered several options for placing ammunition and a number of versions of mechanisms that facilitate the work of the loader. In the base project “Object 752” could carry 40 shots of separate loading, which were to be located in several layouts of the fighting compartment. Mechanisms were also envisaged for feeding ammunition to the line for discharging and loading the gun. At the same time, they were not a full-fledged automatic loader and only facilitated the work of the loader.

Another version of the mechanized ammunition with an automatic loader was also proposed. In this case, 28 shells of various types should have been placed in a special device around the perimeter of the fighting compartment. Automatics was supposed to deliver the selected ammunition to the gun, but feeding the liner remained the task of the loader. The load on the tank crew was reduced, but the ammunition was also decreasing.

The use of a powerful gun and some specific layout solutions led to the fact that the promising tank did not get a machine gun paired with a gun: there was no room left for it. However, the project envisaged the use of auxiliary weaponsIn which quality the anti-aircraft machine gun KPVT of caliber 14,5 mm was proposed. The turret for this weapon was located on the loader's hatch. 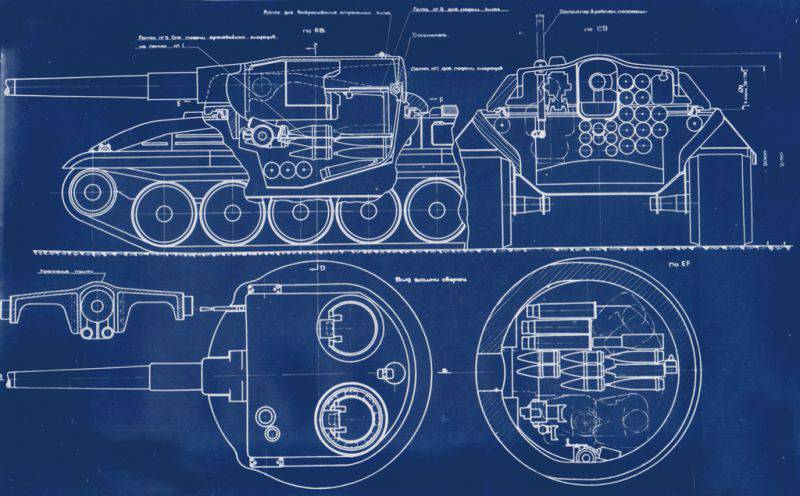 Separate consideration deserves an alternative version of the swinging tower, also worked out in the framework of the project "Object 752". In order to determine the prospects and to work out the main features of the structure, a tower consisting of two parts was proposed. The lower unit was a rotating platform, and the upper one could swing relative to it and served for pointing the gun in a vertical plane. In addition to the guns, there were three tankers inside such a tower, including a loader, ammunition and ammunition delivery mechanisms. According to reports, in the version with a swinging turret, the tank was supposed to use automatic equipment for loading shells and manual feeding of shells.

When developing a swinging turret, it was decided to abandon the anti-aircraft machine gun on the roof, and the release of internal volumes allowed the use of a machine gun paired with a gun. The latter was proposed SG-43 rifle caliber.

The crew, regardless of the type of tower, was to consist of four people: driver, commander, gunner and loader. The driver was located in front of the hull, the rest of the crew - in the tower. Places gunner and commander were at the left side, charging - at the right. The driver had his own hatch, the rest of the tankers would have to use two hatches in the roof of the tower. The hatches were equipped with optical instruments to monitor the situation.

The original design of the hull and the tower, consisting mainly of cast parts of complex shape, allowed for a high level of protection with a relatively small mass. In addition, to reduce the weight of the machine, it was decided to use the most dense layout of the internal units. As a result, the length of the “752 Object” with the cannon forward was 9,745 m, with the cannon backward - 8,925 m. The width of the tracks was equal to 3,4 m, the height of the tower roof was only 2,3 m. In the version with the swinging tower, the height did not exceed 2,15 m. note that the clearance of the machine in this case was 510 mm. A promising heavy tank could become the most compact machine of its class of domestic development. 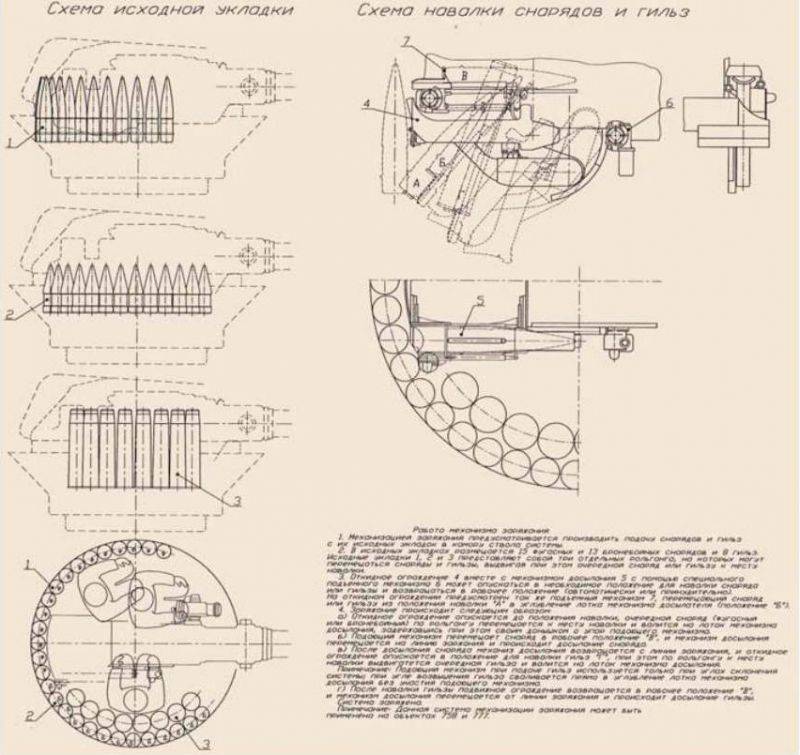 Due to the unusual hull design and size reduction, the combat mass of the promising tank was brought to 45,3 T. Thus, the 752 Object should not differ from other domestic heavy tanks, including later ones, in size and weight. At the same time, there were notable advantages in terms of protection, firepower and other characteristics.

In June, SKN-1953 of the Chelyabinsk Kirovsky Plant 2 sent documentation on the 752 Object and 777 Object projects to the Ministry of Transport and Heavy Engineering. At the end of July, the Technical Department of the Ministry ordered the reworking of the tank with the “777” index, changing its layout, and then building a mock-up on the scale of 1: 10. What was planned to do with the project "Object 752" is unknown. The last known references to him refer to June 53, when the documentation on the two projects went to the leadership of the industry.

For some time after sending the documents, Chelyabinsk engineers continued the development of the 777 Object project, and the development of the 752 Object was apparently stopped. This project remained on paper and was not even implemented in the form of a layout. Probably, in the course of comparing two new developments, “grown” from general requirements, the leaders of the tank industry decided to develop only one project, which was of the greatest interest. It turned out to be the “777 Object”, and the less successful “752 Object” was closed.

A promising project has not left the design stage, but still it is of great interest. In the course of the development of two new projects, SKB-2 ChKZ engineers applied a number of original ideas that were used in one form or another in new projects. Thus, even without reaching tests or mass production, the 752 Object was able to contribute to the development of domestic tanks to a certain extent.