January 20 2016
43
The other day, new plans were announced to upgrade the submarine forces of the naval fleet. According to the latest data, after the current construction of new submarines for the Black Sea Fleet is completed, a similar project starts, as a result of which the Pacific Fleet will receive new submarines. In addition, some information was published that directly or indirectly related to this project.


About plans for the construction of new submarines on January 16 on the air of the Russian Service radio station News"Said the head of the Navy's shipbuilding department captain 1st rank Vladimir Tryapichnikov. The officer said that it is planned to continue the development of the fleet, including through the construction of new submarines. According to current plans, in the foreseeable future, six diesel-electric submarines of Project 636 Varshavyanka should be built. New submarines will be transferred to the Pacific Fleet. The timing of the construction of the boats has not yet been specified, but it is alleged that they will be transferred to the Navy in the near future.

According to V. Tryapichnikov, before the start of construction, the initial project will undergo some modifications related to the operation of equipment in the Pacific Ocean. Details of such improvements, however, have not yet been disclosed. 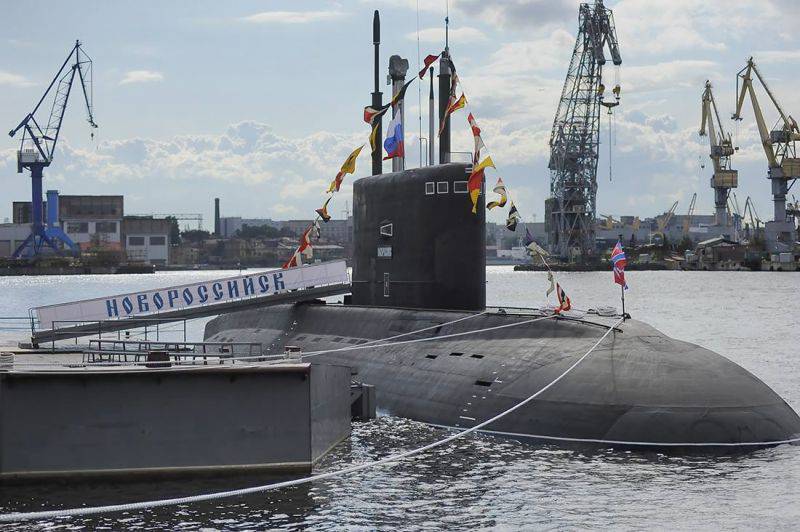 The head of the naval shipbuilding department told only about plans to build new submarines, but did not touch on the reasons for their appearance. A little later, detailed information on this subject was published in the Lenta.ru edition. With reference to an unnamed source in the Ministry of Defense, it is reported that the goal of building six new Varshavyanok is to overcome the backlog of the submarine forces of Russia from the Japanese, formed after the collapse of the Soviet Union.

According to an unnamed source, the Pacific Fleet currently requires about 10-12 diesel-electric submarines. Such a number of diesel-electric submarines in combination with the existing nuclear submarines will ensure superiority over the Japanese fleet, as well as establish parity with the US naval forces. Recall that at the moment there are eight 877 “Halibus” project in the Pacific Fleet, most of which were built several decades ago and may be written off in the foreseeable future. Thus, to preserve or enhance the combat capabilities of the fleet, construction of new submarines is required.

The project of building a series of six Varshavyanka submarines for the Pacific Fleet can be considered a direct continuation of the previous similar order. In 2010 and 2011, the Ministry of Defense ordered six XDUMX project diesel-electric submarines, which were intended for the Black Sea Fleet. To date, four boats of this series are built, tested and transferred to the fleet. From September 636.3 to November 2014, the fleet included the Novorossiisk B-2015, Rostov-on-Don B-261, Rostov-on-Don, B-237 Stary Oskol and Krasnodar B-262 boats. Two other submarines of the series, the B-265 "Veliky Novgorod" and the B-268 "Kolpino", should be handed over at the end of the current year.

It should also be noted that the submarine "Rostov-on-Don" not only began service as part of the navy, but also managed to take part in hostilities. In early December, this submarine, being in the waters of the Mediterranean Sea, launched a rocket attack on the positions of terrorists in Syria. For the destruction of these targets, the Caliber missile system was used. Similar systems are armed with other boats of the Varshavyanka project.

According to the latest plans of the military department, in the foreseeable future diesel-electric submarines of the 636.3 project must replenish the composition of the Pacific Fleet, and, as in the case of the Black Sea, we will be talking about the construction of six submarines. The exact timing of their bookmarks and the company, which will conduct construction, has not yet been clarified. It can be assumed that the construction of the new Varshavyanok will be carried out at the Admiralty Shipyards plant in St. Petersburg, which was built by most of the diesel-electric submarines of the 636 project. Thus, the construction of a new series can start after the launch of the sixth boat for the Black Sea Fleet.

Of great interest are the words of an unnamed source "Tapes.ru". According to him, the goal of building new diesel-electric submarines is the need to reduce the backlog from the fleets of other countries of the Far East. Thus, the emergence of new domestic submarines should increase the combat capability of the Pacific Fleet and thereby eliminate the backlog from Japan, as well as ensure parity with the United States.

It must be admitted that the available information about the submarines of the 636.3 project and their armament may indicate their high potential. New submarines are one of the quietest in their class, and also carry cruise missiles with a long range, demonstrated during last year's launches. Thus, the new “Varshavyanka” can not only adjust the balance of power in the northern part of the Pacific Ocean, but also significantly change the military-political situation in the region. The main factor in this is the high range and accuracy of the missiles.

According to reports, the submarines "Veliky Novgorod" and "Kolpino" (the latter in the series for the Black Sea Fleet) should be launched in the first half of the year 2016. After that, the Admiralty Shipyards will be able to begin preparations for the construction of new submarines. Thus, the heading of the head "Varshavyanka" for the Pacific Fleet can take place before the end of this year, and the construction of the entire series will take about 5-7 years. As a result, by the end of this decade, the Pacific Fleet will receive several new submarines.

Ctrl Enter
Noticed oshЫbku Highlight text and press. Ctrl + Enter
We are
The program of shipbuilding of the Navy of the Russian Federation or a Very Bad PremonitionThe action “Military service under the contract is your choice!” In Rostov-on-Don: future contract servicemen, exhibitions and “Russian Knights”
Military Reviewin Yandex News
Military Reviewin Google News
43 comments
Information
Dear reader, to leave comments on the publication, you must to register.