Turkish Prime Minister announces the end of the "anti-terrorist operation" in the city of Silopi (Shirnak province, Turkey)

January 19 2016
14
Turkish Prime Minister Ahmet Davutoglu announced that the Turkish security forces "successfully complete the anti-terrorist operation" in the city of Silopi (the population is about 75 thousand people) of Sirnak province. Statement by the head of the Turkish government, who is on a visit to Britain, leads channel NTV (Turkey):

The operation in Silopi is almost complete. All urban neighborhoods cleaned of militants. The city will have a curfew for some time, which will guarantee the safety of the civilian population of the city.

It should be recalled that in a number of south-eastern provinces of Turkey, security forces are conducting an operation against the Kurds. Official Ankara claims that this is an anti-terrorist operation, and it is aimed exclusively at representatives of the Kurdistan Workers' Party (PKK), which the Turkish authorities consider a terrorist organization.

The operation is also being carried out in the Diyarbakir settlement, near which the NATO military base is located. During the operation of the Turkish security forces, which lasted for several months, more than a hundred civilians were killed.

The Turkish General Staff has published data on the number of killed PKK representatives in three different cities of the country. According to these data, 337 "militants" were killed in the city of Cizre, in Sura - 102, in Silopi - 136. It should be noted that in Ankara, Kurdish children are often considered to be militants, who, together with their parents, went to rallies against the regular aggression of the Turkish security forces against the Kurdish population of the country.

And this photo tells about the next stage of the "antiterrorist operation" of Turkish security officials, who are also fighting with Kurdish women: 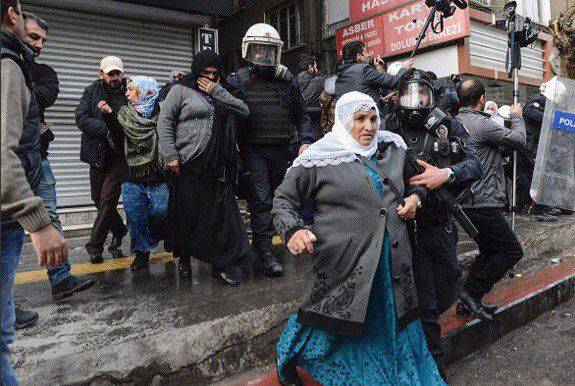 Ctrl Enter
Noticed oshЫbku Highlight text and press. Ctrl + Enter
We are
Burst in Turkish Silopi. There are dead and wounded
Military Reviewin Yandex News
Military Reviewin Google News
14 comments
Information
Dear reader, to leave comments on the publication, you must to register.