January 20 2016
152
At the end of last year, against the background of complete political well-being, Chancellor Angela Merkel unexpectedly does an amazing stupidity: she declares that Germany will accept all Middle Eastern migrants! For such hospitality Merkel was awarded the title of "mother" from migrants. And, it seems, this is a verdict of his political career. 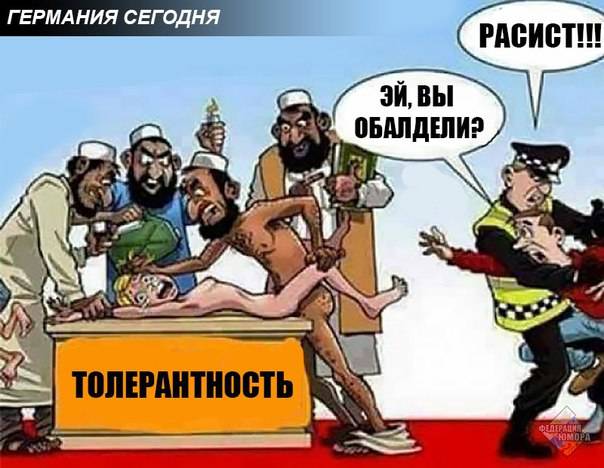 Cologne festivities "unfortunate refugees", crowds of humiliated German women, law-abiding burghers are unlikely to forgive her. In fact, Merkel, from scratch, arranged a migrant crisis in Germany: 56% of Germans, according to opinion polls, understand this and are already expressing dissatisfaction with the Chancellor, who does not control the situation, and demand to change migration policy.

But it's all flowers. Berries of migrant sowing in Germany, new waves of robbery, murder and rape, are still ahead: on the way to Europe about 8-10 million refugees, soon it can turn into one big Arab "spring square" Tahrir, on which, by the way, women were also raped . From the Germans, on the contrary, the German authorities demand tolerance, that is, tolerance towards the perpetrators.

New Year's hunt for migrants for women in Germany will probably become a turning point in the development of the political situation in Europe. Around 600, official statements by victims of violence to the police talk about the mass attacks of migrants, and refute the lies of the Western and our liberal press about individual hooligan manifestations.

This lie is, in turn, a consequence of another big lie of the Western press: exposing the Syrian President Bashar al-Assad as the villain, her ideologists were forced to declare everyone, in words, who damned him, miserable refugees. And they did not diligently notice that suspiciously many young men fled from the war in Syria, among whom there are always a lot of alarmists, deserters, and fighters-marauders, when on the Syrian fronts they had to fight, and not just rob. They put women and children ahead as a shield, under the press cameras, but this is the usual practice of all the color Arab revolutions.

The Western press continues to be deceived in this, perhaps, from despair, but the truth is already coming out. Mostly declassed elements of Syrian and Middle Eastern society in general come to Europe, while its best sons and daughters are fighting on fronts with ISIS militants. That is, migrants - this is a time bomb laid to Europe.

Here an important question arises: is Merkel so liberal-fundamental that she does not see it? It was hard not to foresee it, but she managed ... The Chancellor of neighboring Austria, for example, foresaw, and already introduces checks at the borders, partially restricting Schengen, and the German Chancellor did not foresee ...

The second question: did Merkel help to plunge into the migrant crisis? Imagine that some influential German circles decided to change the political course from pro-American to independent, implying normalization of relations with Russia. What should they do?

Yes, they must dump Merkel, who is the main atlantist in Germany, it is on her that the anti-Russian sanctions are held. According to Alexei Pushkov, a political expert from the State Duma, it is Merkel, possibly blackmailed by the United States, who is the main blocker of the decision to lift sanctions against Russia.

Is there a pro-German party in Germany? On the same New Year’s days, German ex-chancellor Gerhard Schroeder stated that “anti-Russian sanctions are absurd.” By the way, he is a friend of President Putin, the initiator of the construction of the Nord Stream - 1.

In any case: Merkel's migrant policy is simply nonsense; when God deprives a person of reason, or someone’s deliberately calculated step to remove the inconvenient political figure from the field, it could be a pretext for changing Germany’s political course.

Indeed, a whole front has already been formed against Angela Merkel: from the “Left Party” of Sarah Wagenknecht, to the right-wing patriotic forces, and even the government Х s of Bavaria, headed by Prime Minister Horst Seehofer, because the perpetrator of the migrant mayhem has called itself. The fall of the Angels is already inevitable: even political scientists with a name like Alexander Rahr admit that Merkel can resign ahead of time. Some kind of “left - right” anti-liberal revolution in Germany is brewing. Another interesting question: who will replace Merkel?

In turbulent periods stories the most charismatic leaders, who for some reason simply believe the people, come to the fore. In Germany, one of the most charismatic politicians is, perhaps, Sarah Wagenknecht, the leader of the Left Party. She is beautiful, clever, and already smashing Merkel from the Bundestag stands. She has excellent chances to become the next chancellor under the slogan of protecting German women from migrants. Why not?

The internal political situation is so serious that Merkel canceled the traditional trip to the World Economic Forum in Davos, due to increased internal tensions. Note that President Yanukovych during the Maidan was not afraid to fly to Beijing and Moscow.

The official German press reports that Merkel is not going to radically change anything. And the scandalous editorial office of the newspaper “Bild” unexpectedly comes to Sochi to Putin, and takes from him a large, in benevolent tones, an interview. It is noteworthy that “Bild” is the mouthpiece of the most rabid anti-Russian propaganda, an ardent demonizer of Putin, and suddenly such a turn!

Such things in the propaganda field do not occur spontaneously, rather, in Germany the color is really running, this time the anti-American revolution by the German patriots, and the Bild reacted ...

Ctrl Enter
Noticed oshЫbku Highlight text and press. Ctrl + Enter
We are
Raped Europe. What awaits Germany and other countries after the "fun night in Cologne"Refugees from Syria. Will Russia accept immigrants from the Middle East?
Military Reviewin Yandex News
Military Reviewin Google News
152 comments
Information
Dear reader, to leave comments on the publication, you must to register.