Death hid under the crests of the waves ... 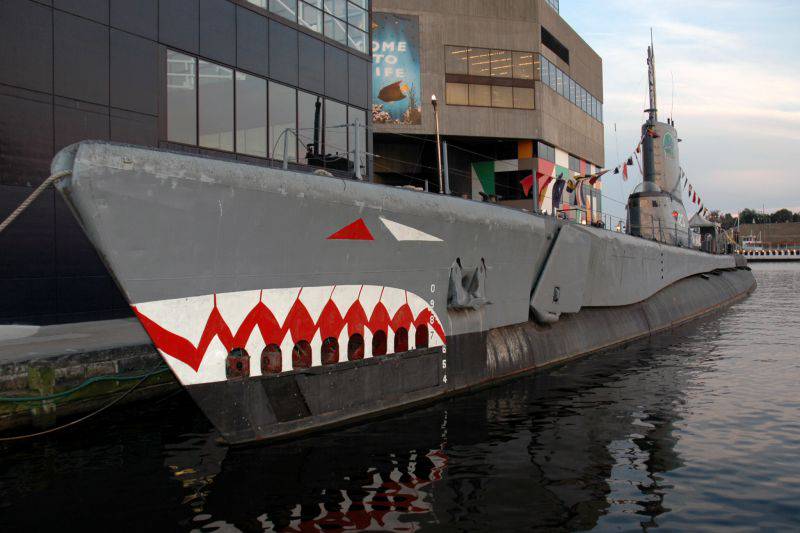 “Victory in the war is not achieved by a separate class of ships, but by a balanced fleet, which, in essence, was demonstrated by the Americans, who fused battleships, aircraft carriers, cruisers, destroyers and submarines into an invincible combat vehicle”, - the author of the previous article thoughtfully finished. You can also add that being rich and healthy is certainly better than the poor and the sick.

The Yankees' fleet was not “balanced”, but inadequately huge. One hundred heavy cruisers and battleships, 40 high-speed aircraft carriers, 800 destroyers, each of which was larger and more advanced than any of their foreign peers.

From the American squadrons moaned the ocean. But the magnificent variety of surface ships did not change the main postulate of naval warfare. In terms of performance, the submarines abruptly escaped. Unconditional leaders in the number of sunk Japanese ships and ships, participants in daring operations to neutralize the Imperial fleet. Fought always, under any conditions and the balance of power in the selected square. 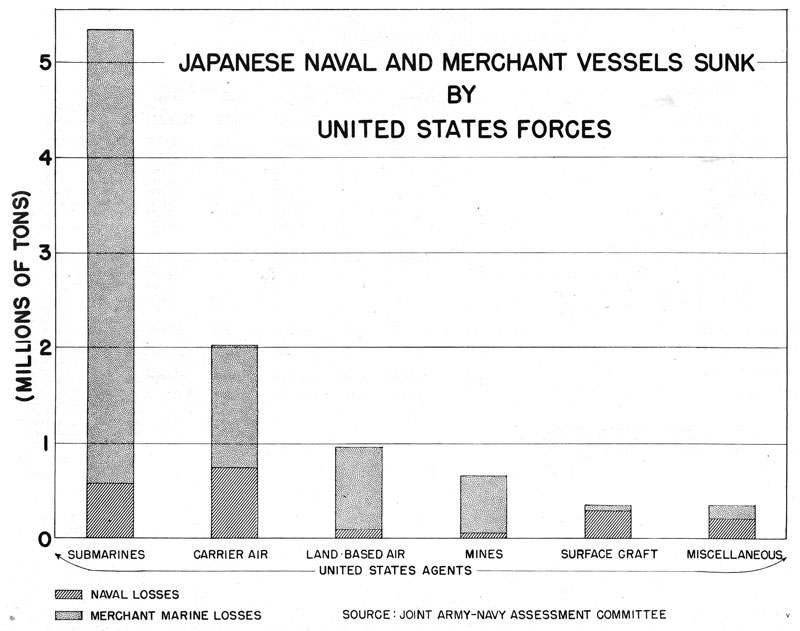 The author could not deny himself the pleasure of publishing this wonderful diagram. Minimum separation of the deck aviation according to the tonnage of sunken ships, due to the nature of the choice of targets. For example, on the account of naval aviators, the sinking of non-operational aircraft carriers and battleships of the reserve of the 4th category is listed during a raid on the Naval Forces of Kure (July 1945). When in their destruction all military meaning has already disappeared.

The submarine heroes each trophy was won in hot battles with the enemy. Boats waited for their targets in the straits and searched on the high seas. When each of the broken Japanese ships could pose a real threat to the American fleet. And it was necessary to do everything to stop the enemy on the way.

If you change the criteria and take for comparison the number of sunken warships, the ratio will be even worse. A hundred and a few American submarines destroyed the 201 battleship, ranging in size from a patrol ship to a strike carrier! The closest “rival”, carrier-based aircraft, fell behind the submariners on 40 points.

Among the loud trophies of the submarines are the Congo high-speed battleship, four heavy aircraft carriers - the Shokaku, Taiho, Unryu and the legendary Shinano, three heavy and ten light cruisers, 50 destroyers and escort destroyers.

As for the merchant fleet, there is a pure mayhem, 4,9 million tons. Oil, coal, ore, equipment, uniforms, food and ammunition. Everything flew to the bottom, when meeting with the evil little fish. 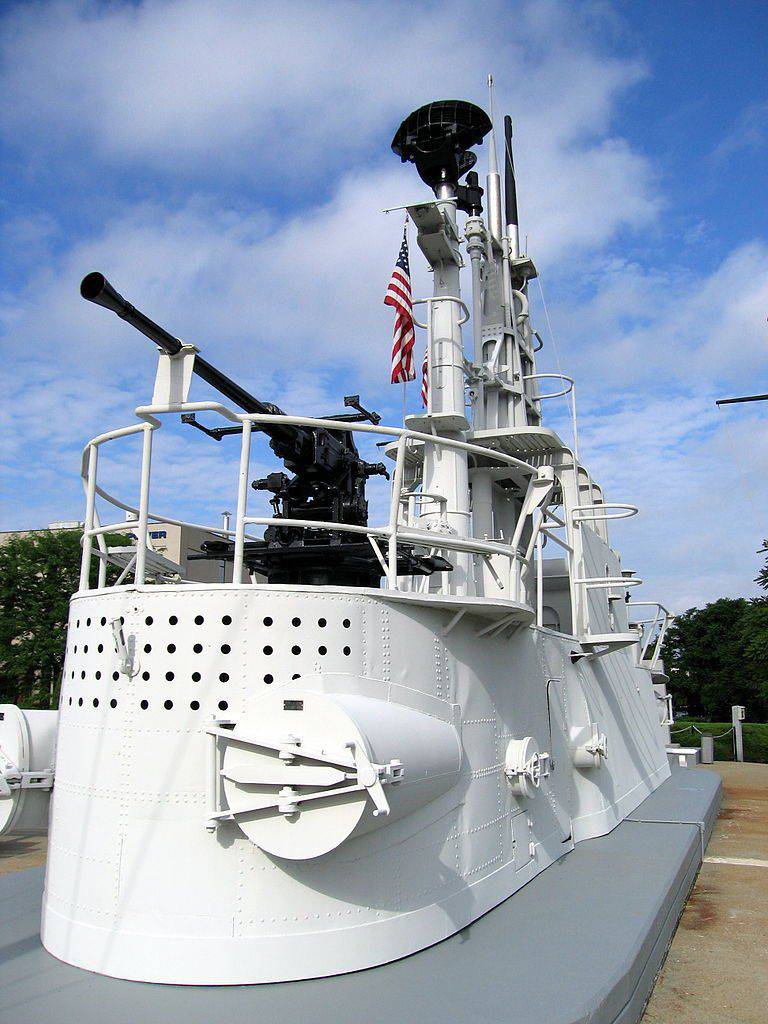 The landing of the submarine “Flasher”, which sent the cruiser “Oi” to the bottom, four tankers and 16 transports with a total tonnage of 100 231 bt.

Despite the obvious numbers, there is a different view on the results of submarine operations in the Pacific theater. The boats very successfully (if not to say more) cut the enemy’s sea communications, but when carrying out large defensive and offensive operations turned out to be completely helpless.

Strategically, submariner combat successes were rarely of great importance. The valiant knights of the deep sea "failed" all the important tasks, failing to achieve the expected results.

Unsuccessful actions of the American submarines at the beginning of the war, who failed to hold up the Japanese offensive in the Philippines, were cited as evidence. As a result, 29 submarines based on Fr. Luzon had only three victories: the destroyer and a pair of transport ships. Plus, the unsuccessful defeat of the hydro-avian carrier “Sanyo Maru” with an unexploded torpedo.

But before expressing stormy criticism, it is worth remembering that at that time the praised American aviation and surface ships were doing. The answer is nothing. Lay prone. Throughout the theater of operations - from Pearl Harbor to the island of Java.

So against the background of their colleagues, the actions of submariners look like a kind of achievement. Were able to cause the enemy at least some damage.

As for the amount of damage, a couple of conditions intervened there. First, the US Navy at the beginning of the war experienced a clear shortage of modern submarines. The only “Gatou” that entered service has not yet managed to arrive in the combat zone. And what was based on Luzon was a blatant junk of the 1920's construction. And it would be naive to expect submariners to win in such conditions, despite the fact that they were opposed by three serious convoys with powerful PLO escort, where every Japanese transport with a landing force had three escort ships.

There have been tragicomic cases. In January, 1945, the entire 25 of American submarines deployed along the entire route of the Japanese convoy, could not intercept the Hyuuga battleship with a military cargo.

Similar reproaches are received by Japanese submariners. The barrage of 13 submarines failed to hold up US aircraft carriers under Midway. True, what is the fault of the submariners themselves? The Americans broke into the Japanese naval code JN-25 and bypassed the dangerous area in advance.

Well, failure happened to all. In the battle of Midway, the wings of two aircraft carriers could not destroy the damaged cruiser “Mogami” with a severed nose. The “youngsters” left and later did a lot of mischief.

An example of a more successful use of submarines were the 23 events of October 1944. On that night, Admiral Takeo Kurita’s strike connection (10 heavy cruisers and 5 battleships accompanied by a dozen destroyers) hit the American underwater barrier at Palawan. With the greed of hungry piranhas, the boats “Darter” and “Dace” attacked their prey. TKR "Atago" and "Maya" died on the spot. Torpedoed “Takao” was forced to interrupt participation in the operation and, accompanied by two destroyers, return to Singapore.

The night mayhem had far more serious consequences. In addition to finding the third Japanese squad, about which American intelligence knew nothing, and significantly weakening its strike potential, the Darter submarine, by chance, sank the flagship (cruiser Atago), which caused swimming in the night sea and demoralization of the entire squadron headquarters, including Admiral Kurita himself.

Despite the fact that the Yankees had an 1200 aircraft group of aircraft, the Kurita compound continued to roam the battle zone. By the morning of October 25, cruisers and battleships broke into the landing zone of the American landing force in Leyte Gulf, smashed the last barrier of escort aircraft carriers, but when the miles remained to the target, Admiral Kurita suddenly turned back. As he later admitted, he lost his nerve, he was not in the best shape after a night bathing at Palavan.

Another interesting episode is marked 5 June 1942 of the year. The submarine Tambor was on the way of the cruisers “Suzuya”, “Kumano”, “Mogami” and “Mikuma”, which were in full swing. Convinced of the presence of an underwater predator, the Japanese laid such a steep evasion maneuver that the Mogami and the Mikuma rammed each other. Thus, the operation on artillery bombardment at. Midway.

The newest aircraft carrier, the Taiho, did not even have time to get to the war zone (destroyed in its first expedition with the Albacore boat in June 1944).

A similar fate befell the “Shokaku” and “Shinano”. The largest of the sunk ships in the sea stories. Destroyed by Archerfish submarine.

I wonder why and why the “Archerfish” was located off the coast of Japan? The answer - there was an evacuation point. The submarines ensured the bombing of Japanese cities, raising the morale of the crews of the “Super Fortress”. Strategic aviation pilots knew that they would save them if they crashed over the ocean.

2 September 1944, the Finback submarine, took SOS from a downed aircraft. After four hours of unsuccessful searches, the submariners nevertheless found and pulled the lanky pilot out of the water. Saved by the name of George Herbert Bush.

And a completely mystical incident occurred with the Japanese submarine I-58. During a patrol to the east of the Philippines, the boat crossed the course with the American cruiser Indianapolis. The first time the attack did not take place. The boat sank the cruiser already on the way back. But, alas, too late - “Indianapolis” managed to deliver a bomb for Nagasaki to Tinian.

In the death of “Indianapolis” there is not only a mystic, but also a harsh calculation. The calendar was 30 July 1945 g. Before the surrender of Japan, there were three weeks left. The sea and the air were under the full control of the Americans. But, Japanese submarines continued to operate there. Taking advantage of the uncertainty of the aquatic environment, boats are able to pass where no other ship will pass. And to fight at the most unfavorable balance of forces, while achieving success.

In addition to performing their “slaughter” tasks, Japanese submarines were used for courier traffic along the Brest-Tokyo route. That is how the Messerschmitts and samples of German engines came to Japan. 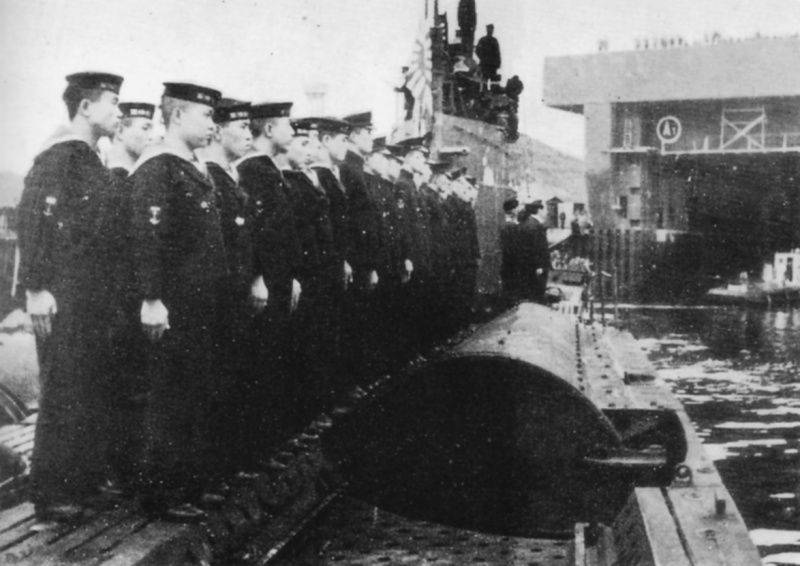 The crew of the Japanese submarine I-8 in the harbor of Brest
In general, the use of submarines in the Pacific theater has confirmed all the results of the submarine war in the Atlantic:

a) submarines were the most victorious type of sea weapons (maximum number of victories, fact);

b) submarines turned out to be the most effective type of naval weapons (the best ratio of costs and achieved results without taking into account indirect damage - the costs of antisubmarine defense and the economic costs of the enemy associated with the formation of convoys);

c) for all this, the submarine fleet remained the most underdeveloped component of the US Navy, which received the least attention and resources.

Yes, submarines are not designed for linear squadron combat. They are not able to defeat the enemy in a flash. They have their own tactics, much more skillful and sophisticated in their cruelty. Suck out all the forces of the enemy fleet - so that by the time of the general battle from its former might only one sting remains.

It remains to add that the modern admirals took into account the mistakes of their predecessors and made certain conclusions. Currently, the number of nuclear submarines in the US Navy (72 units) exceeds the number of missile destroyers. 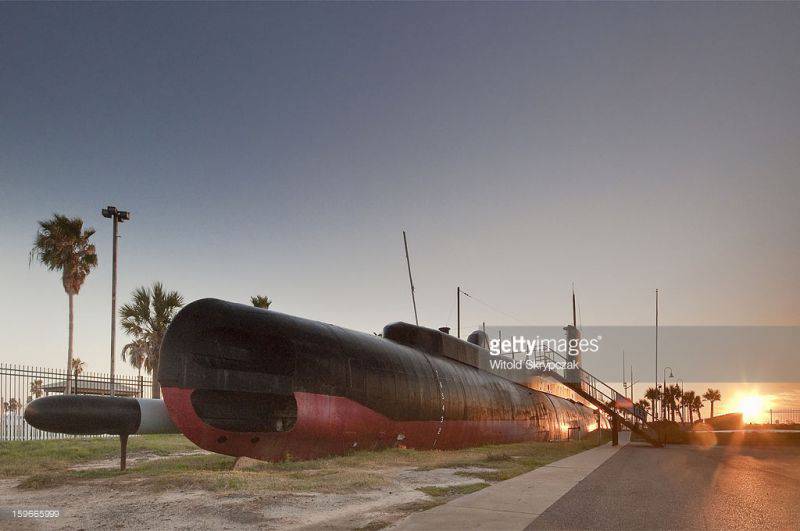 This material is a response to the article by A. Kolobov "The role of aircraft carriers and submarines in the war in the Pacific".