The presence of people born in the United States and former soldiers of the British army in the armed forces of Nazi Germany and Italy during the war years is a kind of historical curiosity that, however, was the place to be. The theme of the presence of citizens and natives of the United States in the army of the Wehrmacht and the SS appears in fiction, films and memories of participants in the war. For example, in the popular TV series “Band of Brothers” (2001 year) there was a scene in which an American paratrooper met in Normandy among the captives of his fellow countryman, with whom he had even worked at one factory before the war. This German is fluent in English and explains to him that before the start of the war his family had responded to the call of the German government to return home.

According to some reports, only a few dozen Americans served in the Waffen-SS units. It was documented that as of May 1940, there were 5 US citizens in the Waffen-SS, more recent data on such citizens are missing. Of these, 9 natives of the USA were killed on the fronts of World War II. Among them was a man with a completely Anglo-Saxon name - Unterscharführer Charles MacDonald. He was born 7 in May 1922 in Buffalo, New York, and died 14 in March 1944 in Estonia. 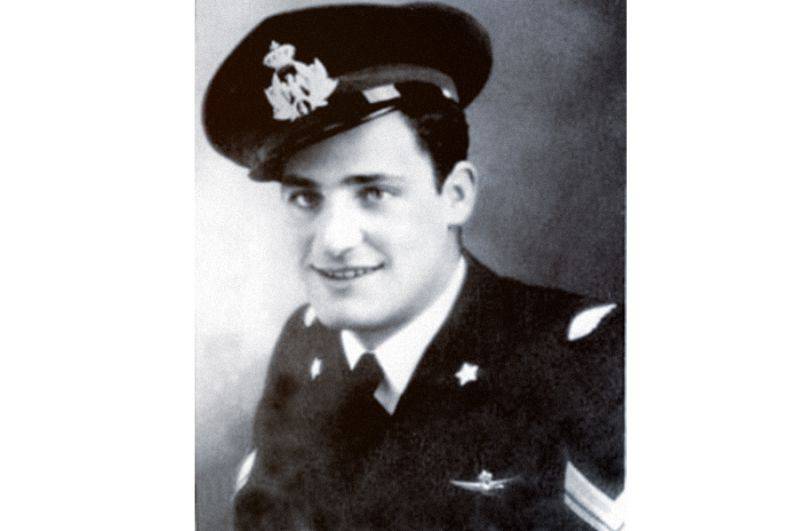 In all likelihood, much more (most likely, by an order of magnitude) the US natives served during the war as part of the Wehrmacht. Set this figure can be approximately when compared with some data that are available for the Italian army. For example, in 1945, the American immigration authorities found that among the 35 thousands of Italian prisoners of war who worked in the states were 5 natives of the United States. In the German army, in which there were millions of soldiers, the total number of natives of the United States could reach several hundred.

In the Italian army, the natives of the United States also, apparently, were enough. The most famous was Vincenzo Patriarka (Maresciallo Vincenzo Joseph Patriarca), who was born in New York in 1914. Vincenzo grew up in America and dreamed of becoming a pilot, but due to the lack of a formally necessary level of education, he was deprived of this opportunity. For this reason, he returned to Italy, where he enlisted in the military Aviation. Vincenzo Patriarcha took part in the war in Ethiopia, and later in the Spanish Civil War. During World War II, he fought against the Anglo-American allies, first in the skies of North Africa, and then Italy. After the war, he continued to serve in the Italian Air Force, having lived a fairly long life. He died only in 1995 in Naples.

Among the Americans who served in the Wehrmacht, Knight's Cross Boy Rickmers (Boy Rickmers) is the most famous. He was born December 20 1895, in New York. In 1933, he joined the NSDAP, in 1938, in the SS, where he served as Untersturmführer. Later, Rickmers moved to the Wehrmacht, where in 1943 he was promoted to lieutenant. He served in the 320 Infantry Division, which fought on the Eastern Front. Knight's cross, he was awarded 26 March 1943 of the year. Fight Rickmers survived World War II, he died only on December 4 1957 of the year. 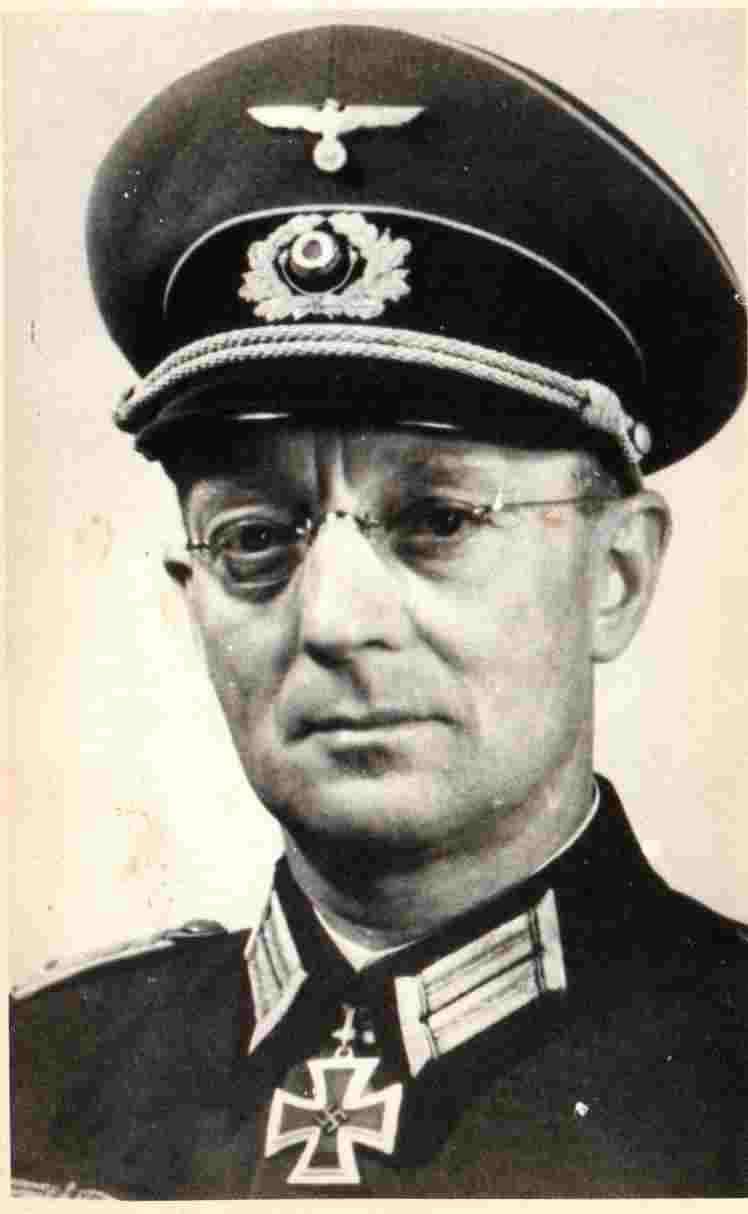 It is curious that in a letter written in July 1990, Gerhard Amler, a former SS obershturmbanführer, who in 1944-45 served as a communications officer in the Hitler Youth Division, recalled the unusual reconnaissance platoon that was created in the battalion of his friend Untersharfurer. In that platoon, soldiers who had ever lived in the United States, Britain, Canada, and later voluntarily joined the SS, served. This platoon was engaged in radio interception of messages that the Allies sent in clear.

Most likely, this written story of a former SS man is trustworthy. It is reliably known that during the fighting in the Ardennes, the German command planned to send a certain number of small groups of saboteurs to the rear of the American troops, which consisted of people who could speak English fluently. This fact was subsequently widely played up in American feature films. The activities of these small groups could hardly have influenced the course of the battle, but it raised a real wave of paranoid suspicion in the ranks of the allies. In the Ardennes, the military police resorted to the next trick - they asked suspicious soldiers in the American form tricky questions (for example, they demanded to name the names of baseball stars or were interested in US geography). Sometimes it worked, but in some cases the real American military personnel could not answer the questions, getting into a rather stupid position.

Apparently, the natives of America and people who had lived in the United States for many years and knew the language perfectly could also work in the units of the Gestapo that operated in Belgium and France. They hunted for underground fighters who participated in the transportation of allied pilots shot down over Europe to the UK. By posing as downed American pilots, they penetrated the Resistance and, probably, sometimes even destroyed underground groups. There is even evidence of participants in the resistance movement on this subject. 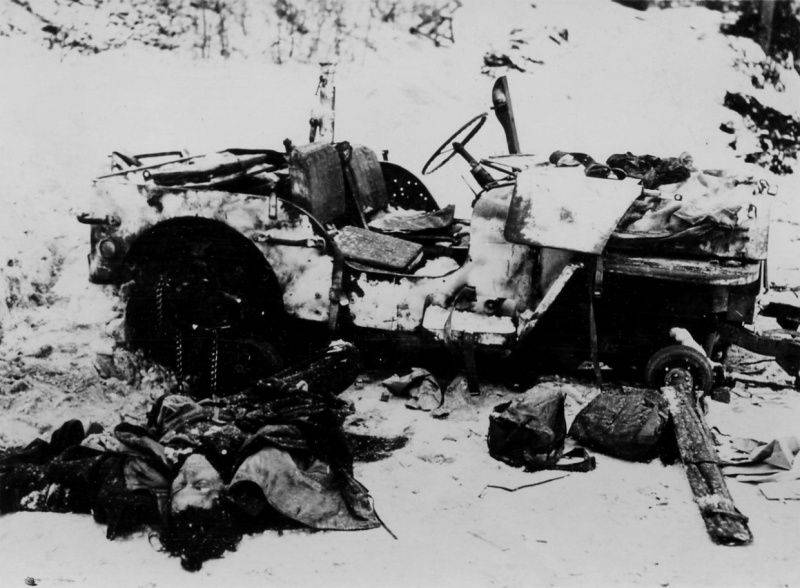 Killed German saboteur regiment "Brandenburg 800" at the remains of a jeep in the forest in the Ardennes.

Also in 1942, the Abwehr attempted to conduct a first sabotage operation in the US - Pastorius. As part of the operation, 12 of English-speaking Germans who had previously lived in the United States and underwent intensive training at the Brandenburg Commando School was supposed to land on the American coast. At school, the cadets mastered an explosive business and became acquainted with German transport and industrial facilities similar to those they were to blow up in the United States. Eight people who were able to successfully finish the sabotage school in June 1942 were landed from submarines on the American coast. Two of them were recruited by the Germans from the ranks of the armed forces, the rest were civilians. Of these, two returned to Germany before the outbreak of World War II, and the six others between 1 September 1939 and 7 December 1942, apparently wishing to reunite with their country of birth, which had entered the war. I looked for all potential saboteurs and then recruited the head of the operation, Lieutenant Walter Kapp, who himself lived in the United States before the war and took an active part in the work of the pro-Nazi German-American Union.

However, this Abwehr operation ended in failure, as one of the US saboteurs landed in the United States, George Dash, was not going to blow up anything. Almost immediately, he contacted the FBI and surrendered to the authorities, telling at the interrogations about everything he knew. Thanks to his testimony, all saboteurs managed to be detained quickly enough. On 8 of July 1942 of the year, six of them were sentenced to death and on 8 of August they ended their lives in an electric chair. This execution has become the largest act of its kind in US history.

Served Hitler Germany and a certain number of British nationals, as well as representatives of the countries of the Commonwealth. Many of them found themselves in German captivity, where they expressed a desire to fight on the side of the Germans against "world Bolshevism." They all joined the Free British Corps as part of the Waffen-SS. 1 was founded on January 1944 of the year, and for the remaining 1,5 of the Second World War in Europe, 39 people managed to be noted in it. At the same time more 27 military personnel in this "corps" never counted. Among the KSB members were not only British (people of mixed and German descent), but also 3-4, an Australian, a South African, a Canadian, a New Zealander, and even a Belgian who pretended to be a South African. It is known that 6-7 members of this unit in the past were members of the British Union of Fascists (British Union of Fascists). They went to the service of the Nazis for ideological reasons. Also among the soldiers of the Corps were people with a criminal past. At the same time, the majority of KSB members entered into it in order to avoid punishment for various violations (including sexual relations with German women - at least 4 cases), and also to receive various benefits and concessions. 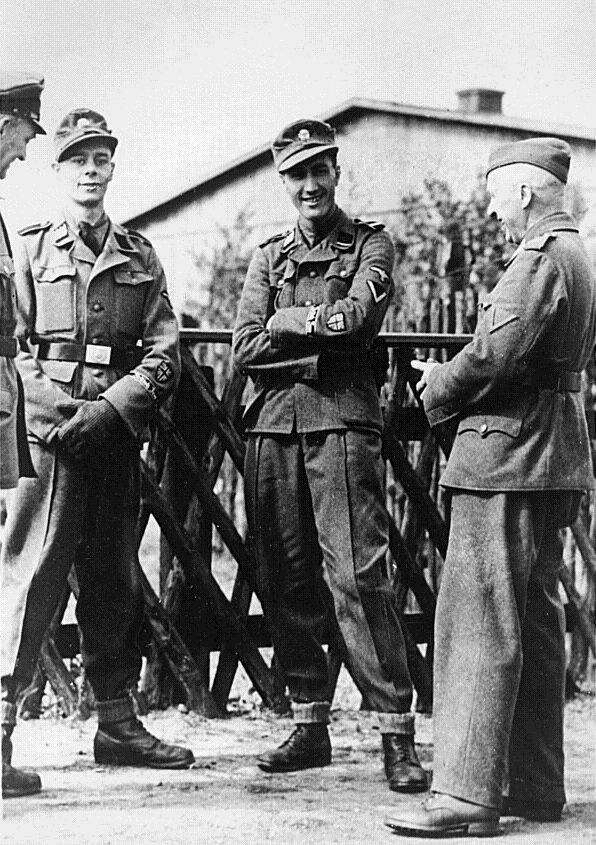 In essence, the KSB didn’t show anything until the Germans ended their patience on 8 March 1945, and the corps commander Walter Kühlich issued an ultimatum: either the corps soldiers go to war, or go to a concentration camp. After passing the course of military training, the unit was nevertheless sent to the Eastern Front as part of the SS Nordland 11 Division, which at that time was the most multinational unit. One part of the British volunteers got into the headquarters of a tank regiment, the other into the 11 tank reconnaissance battalion. As an independent combat unit KSB did not take part in the battles. 29 on April 1945, as part of the Steiner Group, the Free British began to retreat west to surrender to the Allies. Also, the remnants of this volunteer corps were identified in Schwerin.

Soldiers of the Free British Corps, in fact, did not really have time to fight with the Soviet soldiers. Of these, only Thomas Cooper (Thomas Cooper), a German mother who was randomly stuck in Germany at the very beginning of World War II and was drafted into the army, managed to make war on the Eastern Front. Before joining the KSB, he managed to serve in different divisions of the Totenkopf and SS-Polizei-Division divisions, was wounded near Leningrad. After the war, surrendered members of the KSB received various prison sentences, in most cases having been released long before their expiration. So, the same Thomas Cooper was sentenced to life imprisonment, but he was released from prison already in 1953 year.

Ctrl Enter
Noticed oshЫbku Highlight text and press. Ctrl + Enter
We are
Diplomats of the People's Commissariat of Defense: on the eve and during the warTrophy armored vehicles Wehrmacht. France
48 comments
Information
Dear reader, to leave comments on the publication, you must to register.