On the ISS will appear "Andronaut" 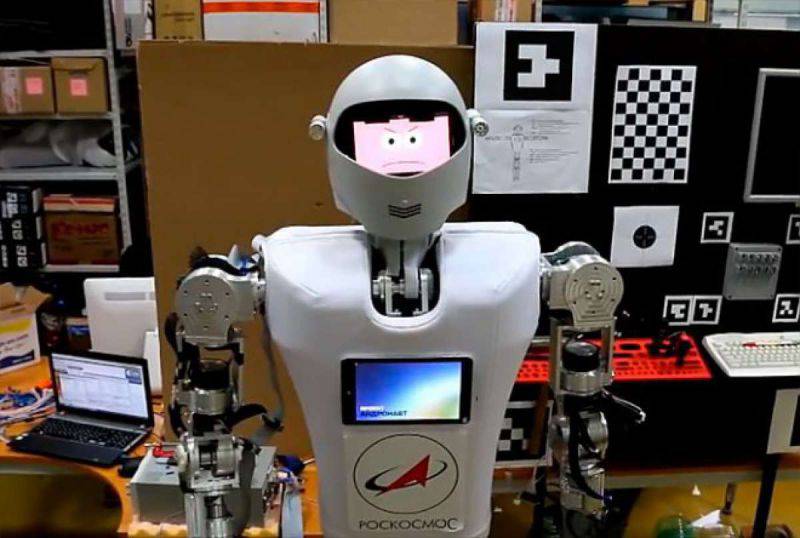 Russian scientists finish with the work to create the first domestic assistant robot to work on the International Space Station.

The anthropomorphic robotic system "Andronaut" was presented in the framework of the XI International Scientific and Practical Conference "Piloted Space Travel", which opened on November 10 in the Cosmonaut Training Center Yu.A. Gagarin in Star City. 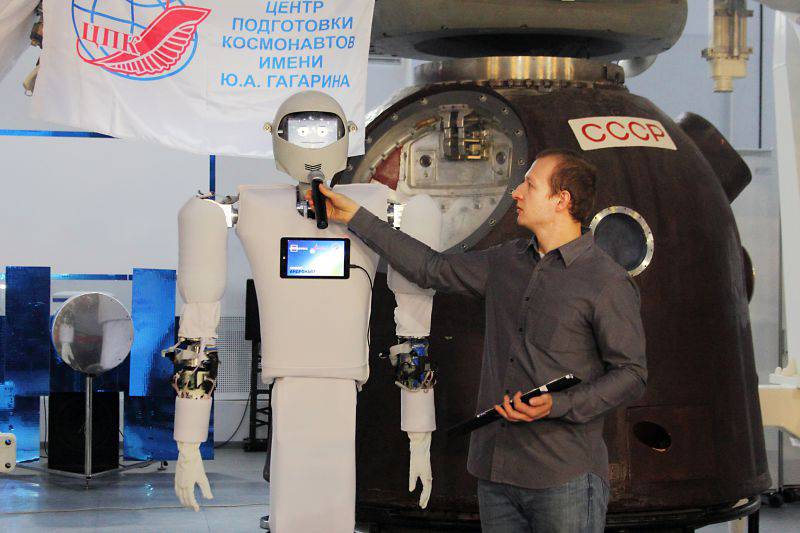 They called the robot "Andronavt". His height 1 m 90 cm, he is broad-shouldered - handsome man ("Man"! Feminists are already groaning). Its peculiarity is that it is anthropomorphic, that is, in its structure, structure resembles a person. And this is his great advantage.

Developers: specialists of the Gagarin Cosmonaut Training Center and the Federal State Unitary Enterprise TsNIImash Institute of Industry, as well as Roscosmos cosmonauts.

“The appearance of an assistant robot on the ISS, on the one hand, will relieve the cosmonaut’s activities, and on the other hand, can complicate the system, since a new participant will appear between the“ professional environment ”and the cosmonaut - the assistant robot. Therefore, in this area it is very important and additional ergonomic research is needed, which will provide additional knowledge in the field of studying the system of interaction between the robot and man- said Igor Sokhin, the project manager at the CPC, deputy head of the scientific department of the CPC. 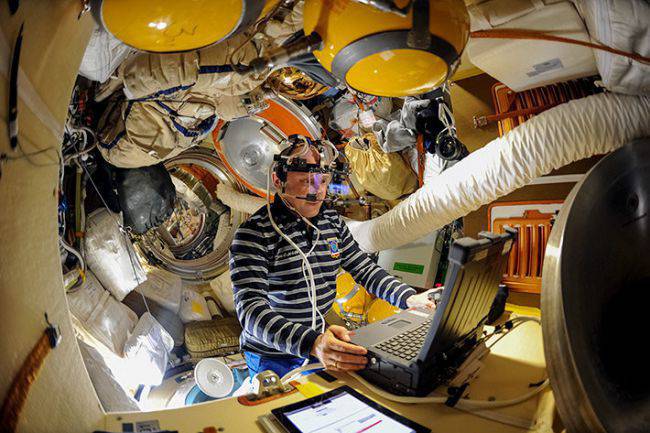 "Andronavt" refers to the latter category of robotic systems, it can be remotely controlled by the operator. For example, a crew member from a sealed compartment on a lunar base, dressed in a special costume (exoskeleton), will be able to control a robot located at a great distance on the lunar surface.

The robot will perform mechanical and repetitive work when conducting experiments, for example, delivering instruments to an astronaut.

The control of the robot can also be performed from the ground by the operator of the Mission Control Center. In the automatic mode, the assistant robot must provide assistance to the crew in performing various flight operations, for example, submit the necessary tool to the astronaut. Andronaut, equipped with a multi-modal interface, is able to provide information support as well: the operator can ask a question and get an answer to it using a voice message or read the multimedia text on the tablet. In addition to the informational “hint”, the issue of providing “Andronavt” with psychological support for the crew members is being worked out.

Now the ISS is used as an experimental platform, new technologies are being developed, in particular, robotic ones. 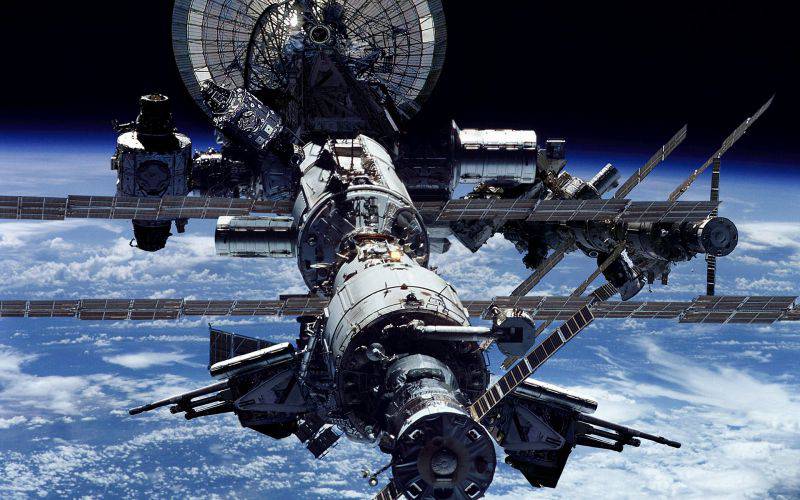 For example, the Canadian robotic complex “Kanadarm” installed on the ISS is “working” to transport large structures. 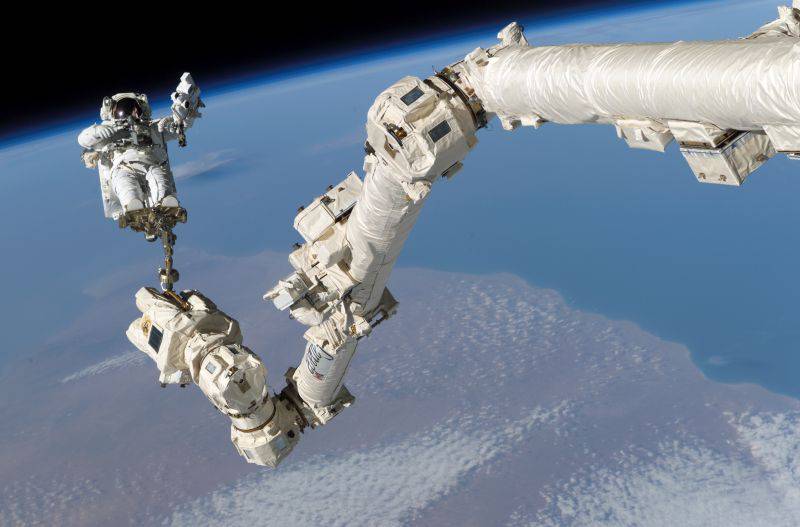 “Cargo boom” (GST) is a cargo crane for moving cargoes and cosmonauts along the outer surface of the station. Used on the Soviet / Russian Mir station and used in the Russian segment of the ISS.

Two cranes. Both were installed on the Pier module. The first was delivered during the flight STS-96, the second - STS-101. Then, in view of the imminent end of life of the Pier, the cranes were moved to the surface of the Search and Zarya modules (in the 2012 year). 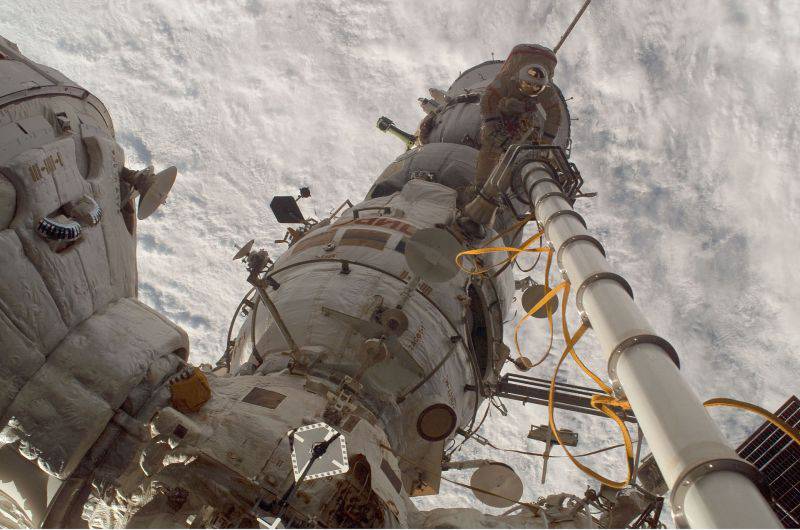 The European ERA manipulator has acquired a new place - the multifunctional laboratory module "Science", created by the Khrunichev State Research and Production Space Center on the basis of the backup module FGB-2. It will contain the basic attachment points and the manipulator control device. 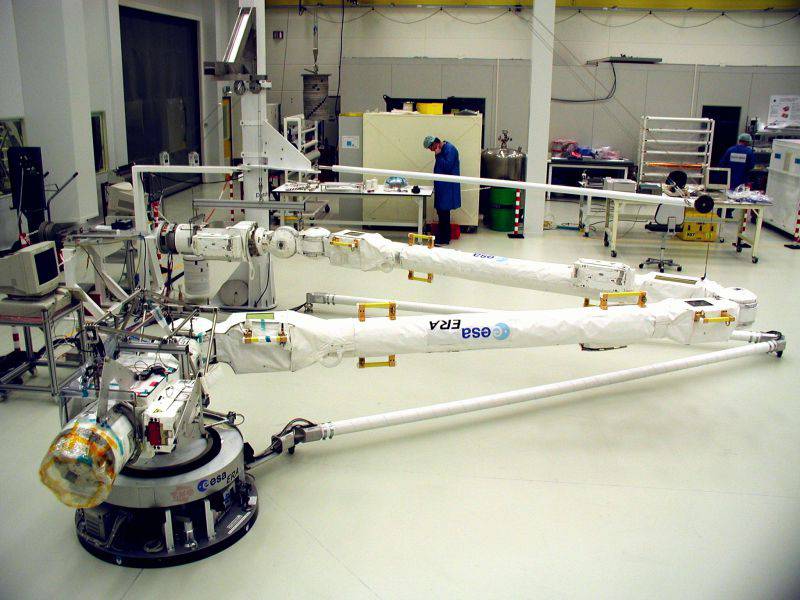 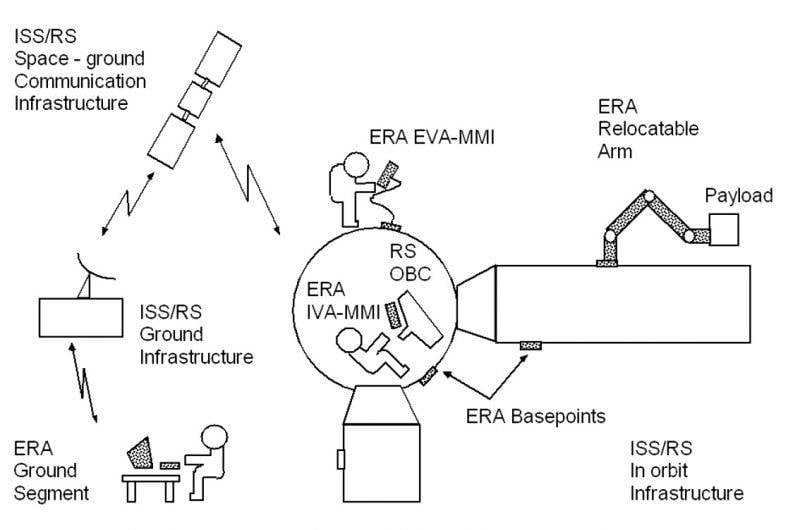 It is a pity that he is still on Earth (due to the disaster of "Columbia" plans have changed).

Robonaut 2 is a humanoid robot developed by NASA and General Motors. It is a legless humanoid figure, whose head is painted with gold paint, and the torso is white. On the hands of a robonaut five fingers with joints like human. The machine can write, grab and fold objects, hold heavy things, for example, a dumbbell weighing 9 kg. The robot does not yet have a lower body. Four video cameras are mounted into the R2 helmet, thanks to them the robot not only orientates itself in space, but also transmits signals from them to the dispatchers' monitors. Also in the helmet is an infrared camera. The total number of sensors and sensors over 350. The neck of the robot has three degrees of freedom, and each arm, whose span of 244 cm is seven. Brush devices have 12 degrees of freedom. Each finger holds up to 2,3 kg. In the "stomach" of the robot is a computing center, which includes 38 processors PowerPC. The construction of the robot is made mainly of aluminum and steel. The weight of Robonaut 2 is 150 kg, and the height is 1 m. A backpack with an energy system is placed on the back of the robot.

Robonavt-2 went to the ISS 24 in February 2011 of the year on board the shuttle STS-133 Discovery and will operate at the station on a permanent basis.

The purpose of launching a robot is to test its functioning under zero gravity conditions, to study the influence of cosmic and electromagnetic radiation on its work.

14 April 2014, the American Space Agency (NASA) should send the legs to the robNaw. What is interesting is that after the legs are attached to the humoid robot, its overall height will be 2,7 meters. Each leg of the robot has seven connections. 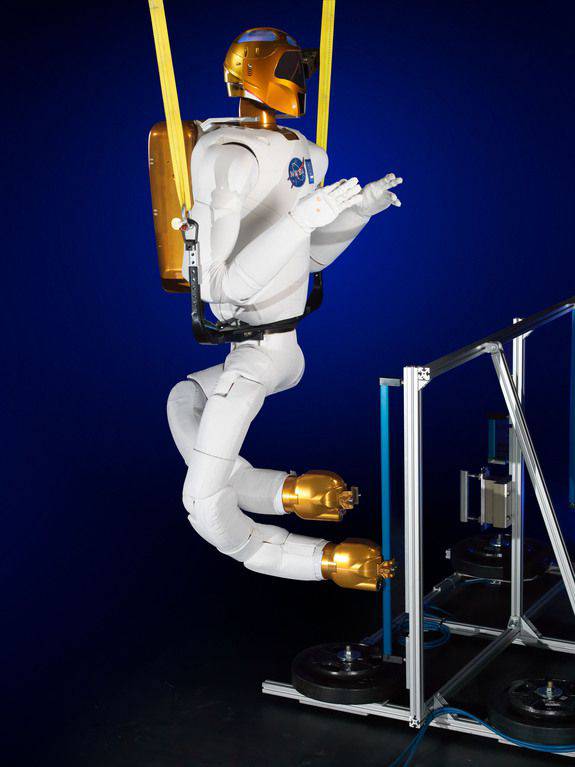 But so far, to my knowledge, this (delivery of the lower extremities) has not happened.

Some of stories domestic kosmorobot 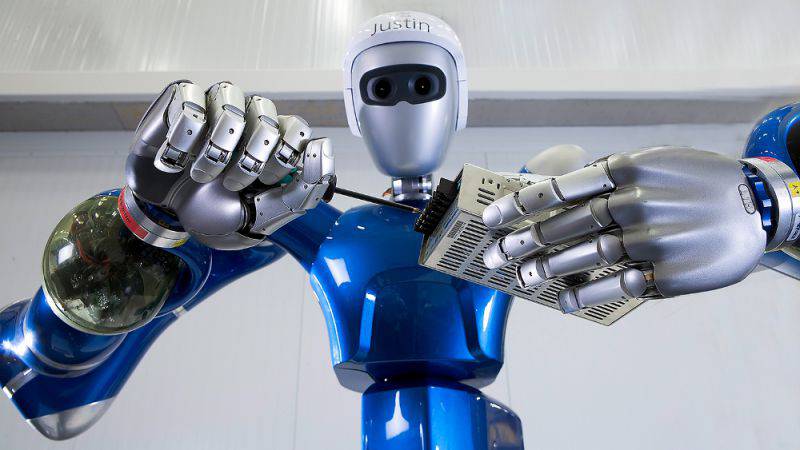 "Lyappa" - a large mechanical manipulator used during the assembly of the Soviet space station "Mir". The manipulator was attached directly to the assembled modules of the station. Each of the modules "Kvant-2", "Crystal", "Spectrum" and "Nature" was equipped with one copy of lyappy. 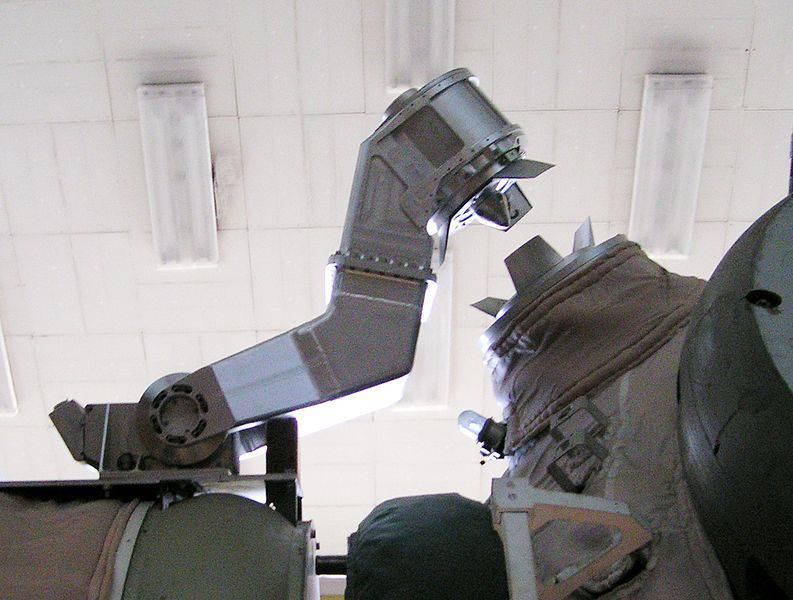 The manipulator was also used to reposition the station modules, allowing them to be rotated to 90 °.

SAR-401 from the NGO "Android Technology". 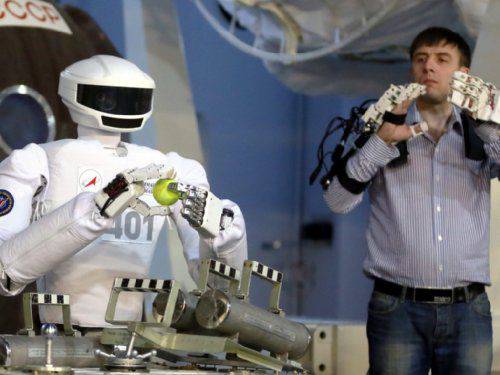 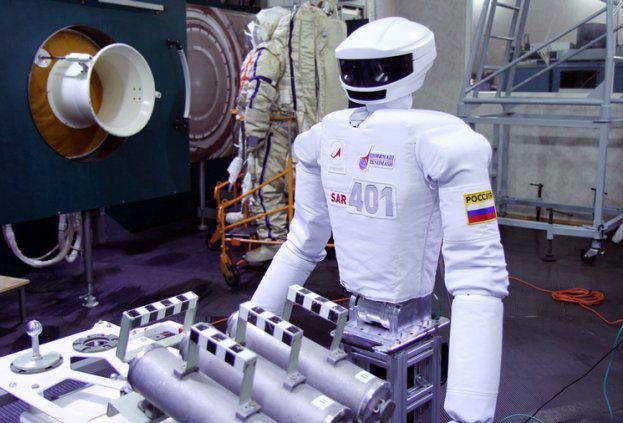 The principle of avatar control: the repetition of the movements of a human operator dressed in a special suit (in the case of SAR-401, a copy-type master device UKT-3 is used)

Since 2013, under terrestrial conditions, various control scenarios are being worked out: from the ISS and the emergency scenario of controlling the robot from the Earth. It is a pity, but this is still a non-flying option.

Ctrl Enter
Noticed oshЫbku Highlight text and press. Ctrl + Enter
We are
Russia refuses the ISSThe main events of 2013 of the year in astronautics
Military Reviewin Yandex News
Military Reviewin Google News
7 comments
Information
Dear reader, to leave comments on the publication, you must sign in.