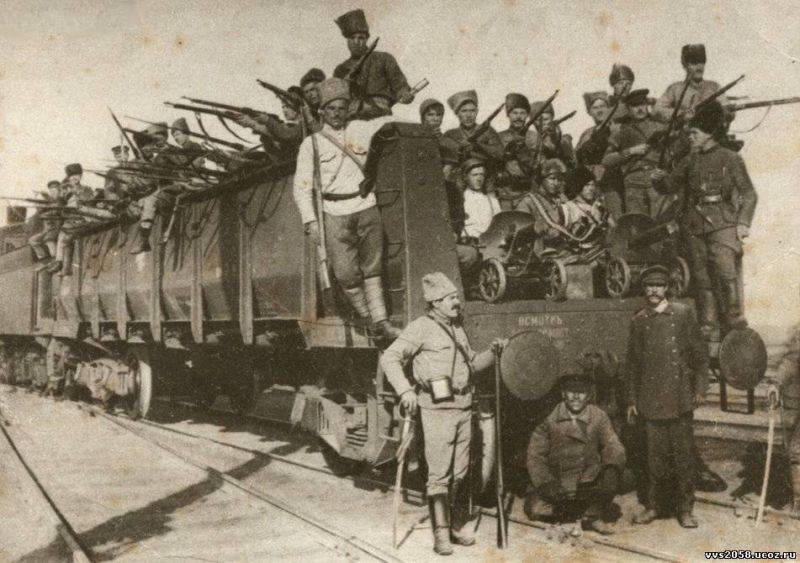 When considering the phenomenon of the Civil War in Russia 1917-1923. very often you can come across a simplistic view, according to which there were only two warring parties: the “red” and the “white”. In fact, everything is somewhat more complicated. In reality, at least six parties took part in the war, each of which pursued its own interests.

What were these parties, what interests did they represent, and what would be the fate of Russia if these parties won? Consider this question in more detail.

1. Red For the working people!

The first party on the right of the winner can be called "red". In itself, the red movement was not entirely homogeneous, but of all the belligerents, it was this attribute — relative homogeneity — that was inherent to them to the greatest extent. The Red Army represented the interests of the legitimate power at that time, namely, the state structures that emerged after the October Revolution 1917. To call this power “Bolshevik” is not quite right, since at that time, the Bolsheviks and the Left Social Revolutionaries were essentially a united front. If desired, a significant number of Left Social Revolutionaries can be found both in leading positions in the state apparatus, and in command (and line) positions in the Red Army (not to mention the earlier Red Guard). However, a similar desire arose later in the party leadership, and those of the Left Social Revolutionaries who did not have time or (due to short-sightedness) did not fundamentally go to the camp of the CPSU (b), suffered a sad fate. But it is beyond the scope of our material, because refers to the period after the end of the Civil. Returning to the red side, one can say that it is their cohesion (the absence of serious internal contradictions, the unified strategic view and unity of command) and legitimacy (and, as a result, the possibility of holding mass appeals) in the end and brought them victory.

2. White. For faith, the king ... or the Constituent Assembly? Or Directory? Or…

The second side of the conflict can surely be called what has been called the "whites". In fact, the White Guard as such, unlike the Reds, was not a uniform movement. Everyone remembers the scene from the movie “The Elusive Avengers”, when one of the characters utters a monarchist statement in a restaurant filled with representatives of the White movement? Immediately after this statement, a scuffle begins in the restaurant, caused by a difference in the political views of the public. There are shouts of “Long live the Constituent Assembly!”, “Long live the Free Republic!”, Etc. The White movement really did not have a single political program and any long-term goals, and the unifying idea was the idea of ​​defeating the Reds. There is an opinion that in the case of (unlikely) White’s military victory in the form in which they wanted it (ie the overthrow of the government of Lenin), the Civil War would have lasted more than a decade, for lovers and connoisseurs of “Schubert’s waltzes and crunches French loaves ”would immediately grab the“ fair seekers ”with their idea of ​​the Constituent Assembly, which, in turn, would gladly“ tickle ”the supporters of the military dictatorship a la Kolchak, who had a political allergy on the French buns under Schubert.

The third side of the conflict, which is now remembered only by experts and a few enthusiasts of the topic, is the force for which war, especially civil, is a real breeding ground. This refers to the "rats of war" - various gangs, the whole point of which is essentially a matter of armed robbery of the civilian population. Tellingly, in that war these “rats” divorced so much that they even got their color, like the two main sides. Since the main part of these “rats” was army deserters (who wore uniforms), and their main habitat was extensive forests, they were called “green”. Usually, the greens had no ideology other than the slogan of “expropriating the expropriated” (and often just expropriating everything that can be reached), with the exception of the Makhnovist movement, which gave its activities the ideological basis of anarchism. There are cases of cooperation of the green with other parties - both with the red (by the middle of 1919, the armed forces of the Soviet Republic had the name "Workers 'and Peasants' Red-Green Army") and with the whites. It is worth mentioning again Makhno with the well-known phrase “Beat the whites until they turn red, beat the reds until they turn black.” Makhno had a flag of BLACK color, despite the character’s belonging to the green movement. In addition to Makhno, if you wish, you can recall about a dozen field commanders of green. Tellingly, most of them were active in Ukraine, and nowhere else.

4. Separatists of all stripes. Emir Akbar of Bukhara and Ukraine in one bottle

Unlike the greens, this category of citizens very much had an ideological basis, and a single one — a nationalist one. Naturally, the first representatives of this force were citizens living in Poland and Finland, and after them - carriers of the ideas of “Ukrainians”, carefully thought out by the Austro-Hungarians, who most often do not even know the Ukrainian language. This movement in Ukraine reached such an epic intensity that it did not even manage to organize into something whole, and it existed in the form of two groups - UNR and ZUNR, and if the former were at least somehow negotiable, the latter were different from the green ones like Djebhat an -Nusra (prohibited on the territory of the Russian Federation) from ISIS (prohibited on the territory of the Russian Federation), that is, just a little differently ideologically smelled, and the heads of the civilian population were cut in the same way. Somewhat later (when Turkey came to life after the British campaign on the BV), citizens of this category appeared in Central Asia, and their ideology was closer to green. But still they had their ideological basis (what is now called religious extremism). The fate of all these citizens is the same - the Red Army has come and reconciled all. With fate.

5. Entente. God Save the Queen in the name of Mikado

Do not forget that the Civil War was essentially a part of the First World War - in any case, it coincided in time. Fighting means the Entente with the Tripartite, and here bam is a revolution in the largest power of the Entente. Naturally, the rest of the Entente has a number of legitimate questions, the first of which is “Why not bite off?” And they decided to bite off. If you believe that the Entente was solely on the side of the Whites, then you are deeply mistaken - she was on her side, and the troops of the Entente, like the other parties, fought against all the others, and did not support one of the above forces. The real help of the Entente to the white was only in the supply of military material assets, primarily uniforms and food (not even weapons and ammunition). The fact is that until the end of the Civil War, the leadership of the Entente countries did not determine which of the shades of white is more legitimate and who specifically (Kolchak? Yudenich? Denikin? Wrangel? Ungern?) Should be really supported militarily. As a result, the troops of the Entente were represented during the war, let's say, by limited expeditionary contingents, which behaved exactly the same as the greens, but wore a foreign uniform and insignia.

6. Germany and sided (bayonet to the rifle) Austria-Hungary. Gott mit ...

Continuing the theme of the First World War. Germany unexpectedly (and perhaps expectedly: rumors about the financing of a number of political forces in Russia of that period are different) discovered that the enemy’s forces on the Eastern Front for some reason deserted en masse, and the new government of Russia is very eager to make peace and leave the adventure First World. Peace was soon concluded, and the German troops occupied the territories occupied by citizens from n. 4. True, not for long. Nevertheless, they managed to celebrate the fighting almost all of the above forces.

And after all, what is characteristic is that this state of affairs, namely the multitude of warring parties, always takes shape during any civil war, and not just the war of 1917-23.

Ctrl Enter
Noticed oshЫbku Highlight text and press. Ctrl + Enter
We are
Cossacks in the Civil War. Part III. 1919 year. Russian VendéeWhy Kolchak did not reach the Volga?
50 comments
Information
Dear reader, to leave comments on the publication, you must to register.