Crime. "Friendship of Peoples", which threatens us with serious shocks

January 20 2016
65
We wrote a lot about the topic of Russian-Ukrainian relations. Viewed these relationships from different angles. But one aspect until today has not been touched upon by us. Not because it is not interesting. Just hands did not reach. Today I want to talk about a topic that concerns, probably, all citizens of our country. Namely, the topic of crime. 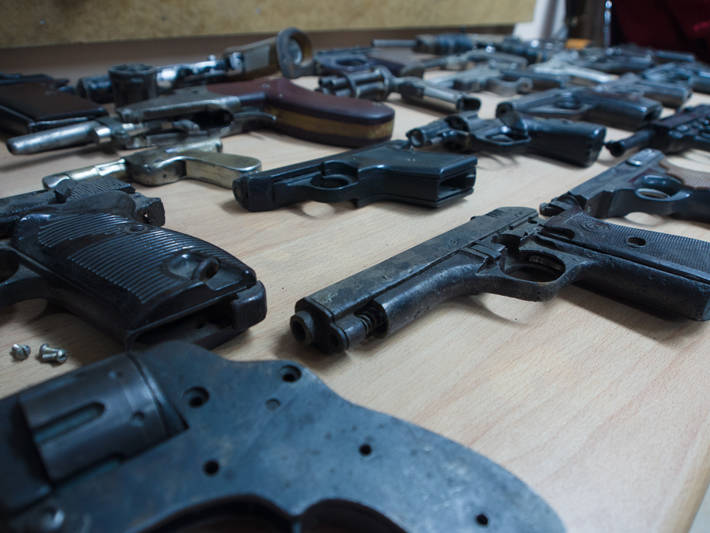 Sadly it sounds, but there is no need to talk about any differences in the criminal environment between Ukrainians and Russians. Criminal authorities were, are, and will be. They do not care for politics. Do not care about differences in ideology. They are interested only in money and control over financial flows.

Recently, the number of crimes committed by citizens of Ukraine has sharply increased. Especially in the European part of Russia. Reports are full of messages about the robbery of country houses and cottages. About thefts committed by Ukrainians. On the drug trade. That is why we will try to sort out the situation "on the shelves."

So, theft and robbery. What is the reason for their increase? Why is there a surge right now? Sadly it sounds, but we are also guilty of this in many respects.

Remember the decree of the President of the Russian Federation on migrants from Ukraine? It was there that the bomb was laid, which our militiamen are now trying to neutralize. Citizens of Ukraine have lost the benefits that they had before. Now they are on an equal footing with others. Moreover, now Ukrainians need to do everything quickly. And do not want to.

So some of the unreported illegal immigrants across the expanses of Russia hang out. What is illegal? This is a sharp reduction in wages. A sharp decrease in income of Ukrainians. And in some regions it became impossible to find work at all. Moreover, many of the employers now simply expel Ukrainians without giving a reason.

Or, alternatively, they take it with pleasure, because you can pay much less. And to all the arguments should be one answer: "Well, we did not call you here." Our friends from Lugansk region encountered this several times. Those who arrived not so long ago, who did not come from the fact that there is war in the republic, no. Because there is no work. And the military structures in which they were composed, have undergone a fair reduction.

Hence the reaction. I built there. I was not paid honestly. I was kicked out just like that. So I have the right to take my own. This, in many respects, explains the thefts on construction sites and in already built houses. We must fight this. And above all, local authorities. It is the simplest precinct who always knows who and where has appeared on his plot. It is the policeman who can be the main link in the fight against these, often not professional, thieves.

If such a struggle is not waged, we get the following crimes. Impunity gives rise to more serious crimes. And it's scary. It sounds trivial, but it’s better to warn and punish a petty crime than to get a murderer or a rapist.

Much more serious cases occur in the environment of organized crime groups. The first thing that is noticeable to everyone is a sharp increase in the number of so-called infantry in the organized criminal group. Ukrainians who have passed the ATO are now actively looking for places where they can apply their skills. Let me remind you of one incident that happened not so long ago. 4 December last year at one of the clubs in Moscow was made a gangster "hitting".

A group of bandits attempted to crush the Element club. They hid behind the name of one of the thieves of the authorities Shakro Young. It does not matter at all what side Shakro Young is attached to there, this is the case of the Ministry of Internal Affairs and the Investigative Committee. Another thing is important. During the shootout, two of the attackers were killed. Their names are established. Both citizens of Ukraine.

Gangster infantry lives a little. Therefore, its number has always been limited. Recall dashing 90-e. Probably in every city in the cemetery there is an alley of “heroes” of crime. Beautiful monuments, rich gravestones and very young people in the photo.

But even this is not important in the environment of organized crime groups. The main thing is that now, against the background of events in Ukraine, there is a redistribution of spheres of influence in the criminal environment.

Example? Let's look at the Donbass. No matter how we criticize the governments of these republics, but now there is no envy of crime. What the power of criminal authorities has always been based on is not working today in the Donbas. On the physical "hitting" you can get a very real armed response. And given the combat experience of the staff of the Ministry of Internal Affairs of the republics, the answer is often tragic for the attackers.

And what happened? Where are the criminal authorities of Donbass? Some part returned to Ukraine, but the other part went ... to the Crimea. Why? Yes, by law. It is difficult to imagine a thief in law or the authority of Donbass, who would not have a dacha or other property in the Crimea. So, they automatically became citizens of Russia. By the way, this is precisely what explains the large number of expensive cars with Donetsk numbers in the Crimea.

And what about the Crimea? Silence and grace? Not. There are now very serious disassembly between the criminal "chiefs". Not just serious, but in full thieves' tradition.

Again, we remind readers of the events of the recent past. December 22, not far from Yalta, was killed by crime boss Mikhail Lyashko. In the criminal world is better known under the names of Mishan Kosoy and Michal Mikhalych. The man is far from simple. The owner of many enterprises, vodka king and so on. And this authority came from Donetsk. It was there that the main sources of income and their own "army" were.

It is clear that the classic "forewarned means armed" should work. But given the state of the law enforcement system, the danger is serious. And I do not want to lose the police in battles with scumbags.

What does the crime in Ukraine do today and why should we intensify our efforts?

The main thing - supplies weapons and ammunition on the territory of Russia. About this, many talk and write. Borders practically turned into roadblocks. But the weapon still goes. In what ways? Yes, just everything. In the ATO zone of the Ministry of Internal Affairs of both sides periodically find huge caches of weapons. Officials say in the media that the enemy was cooking or preparing something there, and they courageously prevented it.

The last known signal of such an incident came from Perevalsk. This is a district center near Alchevsk, if someone does not know. Simply, many people know the town of Alchevsk, and Perevalsk is less known.

So, in the basement of a dilapidated house, 350 small arms and 25 000 ammunition units were found. There is information that this weapon was not listed in the database of the LC and "Voentorg". With such an account, thank God, everything is in order.

While the investigation is underway, it’s not worth talking about who owned the weapon. Although everyone knows who controlled Perevalsk, and whose parts were there. But I repeat, it is unequivocally early to talk about belonging.

There is only the result. Found "trunks". Those weapons that are found are not actually registered by any of the parties. His documents simply do not. So whose is it?

The answer is obvious. The weapon is criminal and is intended for sale to Russia and other countries. How? After all, we just wrote that this is practically not possible at Russian checkpoints.

Yes, there is impossible. And in other places? The scheme is so simple that only the blind can not see it. Weapons are being assembled in the ATO zone by criminals on both sides. Then it is taken out on the territory of Ukraine and shipped there. The frontier, as our media periodically shows, is "locked up" there. Especially from Ukraine. Special.

One such "castle" 16 January showed all Ukrainian media. When they marked a note about the return of a Ukrainian soldier from the territory of Russia. The lad to visit the New Year went to relatives. And the most interesting came. Only then caught. And this is not an isolated case. In isolated cases, just caught.

Another topical issue for criminals was the supply of synthetic drugs. Federal Drug Control Service of Russia is already suffocating from the Ukrainian synthetics. The "hair dryer" seeps into any crevices. Recall the events of last year. When in various cities of Russia a lot of drug addicts left in a different world from the use of such synthetics. Traces also went to Ukraine.

Today, in cities located near the Russian-Ukrainian border, stencilled advertisements like "Action. 3 at the price of 2. Smoke. Flight. Speed. Synthetics" began to appear again at night. And a mobile phone. I emphasize, not local.

And at the end of the topic is the last, but quite reasonable question. Our law enforcement officers are well aware of crime bosses. So how do all these criminals end up on our territory? Why do they not linger at border points, but come and go freely? Not even save court decisions banning entry.

The answer is simple again. There is Belarus. It was there that a loophole appeared. We have no borders with Belarus, and the Belarusians do not have to comply with the judicial decisions of Russian courts.

Why is that? After all, it has long been the opinion that the Ministry of Internal Affairs and the KGB of Belarus have still retained Soviet personnel and are able to prevent criminal wars without any particular exertion. We have no answer. More precisely, it is. But not sure what is correct. Probably, the loyalty of the Belarusian special services is caused by the position of President Lukashenko on the conflict in Ukraine. But this is our guess.

There is another topic related to crime. This is a topic of financial embezzlement in our institutions. The topic is serious. Therefore deserves a separate analysis. And consultation with experts.

But in general, today Russia should clearly understand: “dashing 90 are threatening us”. One only pleases. Today, though dashing, but already 2000. And our security officials have learned a lot. So, it will break the crime in an adult way. No snot.

Ctrl Enter
Noticed oshЫbku Highlight text and press. Ctrl + Enter
We are
Return of the "winders". In Russia, teenage crime is gaining momentumCriminalization of Russia. What is the essence of the influence of criminal counterculture on society
Military Reviewin Yandex News
Military Reviewin Google News
65 comments
Information
Dear reader, to leave comments on the publication, you must sign in.