"New Middle East" is not quite up to American calque

January 18 2016
29
Last Thursday, US Secretary of Defense Ashton Carter, speaking at the military base of Fort Campbell (Kentucky), said that the special forces of the US Armed Forces were stationed "on the ground" in Syria and established contacts with the opposition. Carter did not go into details of the operations of the American commandos. Some of its details were leaked to the media. For example, the Washington Times newspaper reports that there are about 40 US special forces among the Syrian rebels. "Their main goal is to interrupt the flow of ammunition and fighters to Rakka, which the Islamists call their capital." 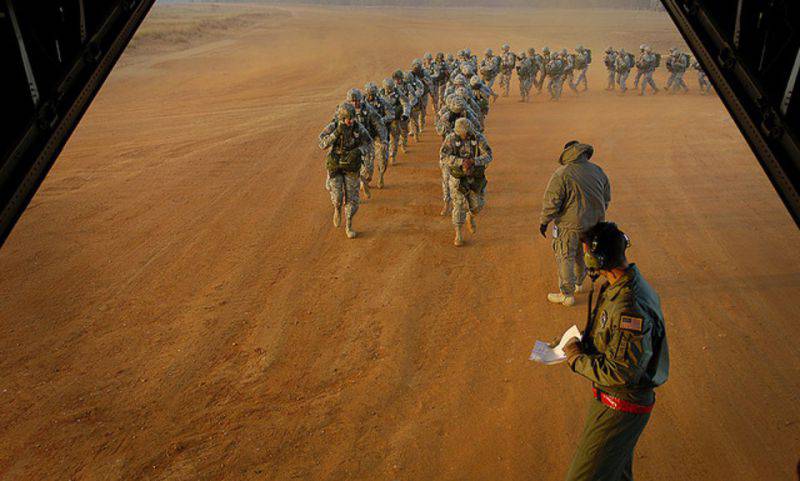 For the first time, US President Barack Obama spoke about connecting American commandos to actions in Syria at the end of last October, when it became clear that involving the Russian Aerospace Forces into a conflict gives the Syrian government army a chance to change the course of the war in its favor. Obama publicly returned to this topic several times, as if preparing the basis for such an operation. In particular, he expressed concern about the fate of the dam built by Soviet experts on the Euphrates River near the city of Al-Ahmar.

In early December, the militants of the Islamic State terrorist group blew up a similar dam in Iraq, making it difficult for the government forces to cause harm to the population. The threat of undermining the dam was in Syria. But here in late December, the Syrian army, with the support of the Russian videoconferencing, was able to establish control over the dam.

It would seem that for Obama's fears now there are no big reasons. However, the American commandos got the go-ahead for action and, in the first decade of January, found themselves on Syrian soil - in areas close to the capital of the IG terrorist group. For the Americans, too, there was a dam - the Tishri hydroelectric station in the province of Aleppo. She was beaten off by the militants of the IG unit of the Syrian Democratic Forces.

Experts frolicked over this, believing that a turnaround had occurred in the Syrian war, and now the Americans will try to take Raqqah first to fix their decisive contribution to the victory over IS. It seems to confirm this version and the sharply changed rhetoric of President Obama. More recently, he absolutely excluded the participation of the US military in a ground operation in Syria. During the week in his speech with the message “On the state of affairs in the country,” Obama asked Congress to allow the use of US troops against the Islamic State terrorist group. What so dramatically changed the plans of the American authorities?

The beginning of January was marked by serious successes of the Syrian government army. With the support of the Russian videoconferencing, militias and units of the opposition forces, it advanced on all fronts. Dozens of villages were liberated from the militants of terrorist groups (more than 220 since the beginning of the autumn offensive). Perhaps the most serious success was achieved by the Syrian army in the province of Latakia, where it occupied all the heights dominant in the Kurdish mountains and beat off the key point of defense of the terrorists - the city of Salma. On this occasion, the ringleader of the militants "Ajnat al-Kavkaz", a native of Chechnya, Muslim Shishani, panicked. His group in Latakia, consisting of immigrants from the North Caucasus, was on the verge of destruction. Shishani’s video message for help to the Mujahideen states: “We are here in a very small area, and if they (the Syrian government army — GG) clean it up, then all Syria will come under their control. And, most likely, the Syrian army will squeeze us into the desert, isolates and returns the state. ”

Similar moods are boiling among the leaders of other groups. They are not even changed by individual Islamist successes, such as the recent counteroffensive in the province of Homs, during which the militants regained control over two settlements, or the support that Shishani panicked from Turkey had received. After all, the main thing is that not only the government army and militia are fighting with the Islamists. Turned against them weapon even the detachments of the democratic opposition in conflict with the government of Bashar al-Assad. According to Lieutenant-General Sergey Rudsky, Chief of the Main Operations Directorate of the General Staff of the Armed Forces of Russia, at present, with the support of the Russian 11 Aerospace Forces, such units of more than 7000 fighters are attacking the positions of Islamic terrorists and have already freed several settlements from them.

This new trend is fully consistent with the Russian goals in Syria - to knock out terrorist groups from the country, while maintaining the unity and integrity of its territory. Such a position does not find support in other coalitions involved in the conflict. Why?

The Syrian standoff is long история. It began with the grandiose plans of the US State Department, announced back in June 2006 by the then head of American diplomacy, Condoleezza Rice. That was the time of the next aggravation of relations between Lebanon and Israel, which later grew into a second Lebanese war. Rice came to Tel Aviv to support the Allies. At a meeting with Israeli leaders, she made a programmatic statement: “What we are seeing today, in fact, represents the beginning of labor battles, which will result in the birth of the“ New Middle East ”, and, whatever we do, we should report that we are working in the name of this New Middle East. ”

Meanwhile, the Middle East, the United States began to rebuild earlier - from Iraq. When Condoleezza Rice opened the eyes of the Israelis to their policies, the Iraqi President Saddam Hussein had been in his grave for three years. After this American philippic, the Libyan leader Muammar Gaddafi told his Syrian counterpart Bashar al-Assad: "Now they will come for us." Assad only laughed in response.

Condoleezza Rice's midwife revelations about Middle Eastern childbirth were not a trivial figure of speech. Almost simultaneously with the Tel Aviv speech by the head of the US State Department, an article by the retired colonel Ralph Peters appeared in the magazine Armed Forces Journal (published by the Pentagon). The author called it “Bloody Borders” and added a significant subtitle “How the Middle East can look better”. The colonel illustrated his thoughts with a desired map of the Middle East, based on the confessional and ethnic settlement of the aborigines of the region.

Peters' map was soon dubbed "scandalous." In fact, the colonel worked hard marker. Iraq, for example, it divided into three parts. The north of the country gave the new state "Kurdistan" (it also painted on the territories of Turkey and Iran populated by Kurds), in the western lands of Iraq and eastern Syria placed Sunni Iraq. Baghdad inherited Shiite territories stretching to the south of the Persian Gulf, to Qatar. By a separate Islamic state, Peters designated the area with Muslim shrines, cutting it off from Saudi Arabia. The colonel’s hand reached further to the East and drew Balochistan on the border lands of Pakistan and Afghanistan.

Ralph Peters resolutely walked through all the countries of the Middle East. One - (Azerbaijan, Jordan and Yemen) significantly increased the territory at the expense of neighbors, the other - (Saudi Arabia, Syria, Iraq, Iran and Turkey) thoroughly cut. Third - (Kuwait and Bahrain) and completely eliminated as superfluous. These were not amateurish fantasies. Ralph Peters during his service has published many papers on military and political strategy. Knew in this sense. Peters retired from his position as deputy chief of staff for intelligence in the US Department of Defense. After that, he gave his "Blood Borders".

The article in the journal and the subsequent book (“Never Stop the Battle”) was received with approval at the US National Military Academy. A new division of the Middle East was respectfully called the "Map of Colonel Peters" and began to study it at the highest officers and generals courses.

Scandalous map of Peters acquired 2006 in Rome in August, where two months after publication in the Armed Forces Journal, it was hung out for review at the NATO Military College, in which Turkish officers were trained, among others. On the map the Turks lost the east of their country. Now there, according to Peters, the lands of Kurdistan stretched to the Black Sea coast. The scandal came serious. The head of the General Staff of Turkey, General Boyukanit, expressed “decisive protest” to the chairman of the Joint Chiefs of Staff of the United States, Peter Pace.

Demarche Turkish general, however, remained without consequences. He did not influence the policy of the Americans, nor their plans and moods. About this, the US military sometimes talk it over. Last August, for example, before the resignation, the Chief of Staff of the Ground Forces of the US Army, General Raymond Thomas Odierno, was openly open. At his farewell press conference, Odierno said: "The partition of Iraq may be the only solution for the future of this country, since it is hardly possible to expect a truce between the Sunnis and the Shiites." The general called ineffective the actions of the international coalition against LIH and expressed the opinion that American troops should be returned to the region, and not limited to military advisers (there are now three thousand of them).

Incidentally, in 2004-2006, Raymond Thomas Odierno combined his service in the Joint Chiefs of Staff of the United States with the post of military adviser to US Secretary of State Condoleezza Rice. Most likely, Odierno had a hand in the State Department’s plans to reshape the political map of the Middle East. Now he only confirmed the long-standing intentions of the American authorities.

When Odierno spoke to the media, he couldn’t imagine that in a month the Russian military would begin an operation of aerospace forces in Syria, and this would drastically change the balance of forces in the Middle East. Rice-Odierno-Peters’s plans to create a Sunni Iraq will also be threatened, which are so organically reflected in the basic name of the terrorist group Islamic State of Iraq and the Levant, from which the Americans now deny it.

Today, Syria is hard and slowly returning to its former borders. The map of Colonel Peters is torn under the blows of the Russian Aerospace Forces, the Syrian government army, militias and the opposition. That is why the Americans hurried to throw the special forces in the center of the Sunni lands. There will be someone to meet the United States troops, whom the Pentagon strategists already see on Syrian soil. Only electoral clashes between Democrats and Republicans can prevent them. However, they know how to unite if serious national goals are at stake ...