How to deal with younger alcoholism?

January 18 2016
104
It became known that officials of the Ministry of Education and Science prepared a new project. The project aims to reduce the percentage of representatives of Russian youth who consume alcohol. The initiative, at first glance, is sound, although it was late for “dtsat” years, however, with regard to the “late initiative”, it can still be said that it is better late than never. The only method of implementing such a project, which (the method) was announced by the press service of the main educational and scientific department of the country, looks somewhat strange.


According to the press service of the Ministry of Education and Science, the elimination of addiction to alcohol-containing beverages will begin with advanced training and retraining of teachers ... Reportedly, under the auspices of the ministry there will be (it’s worth emphasizing what it WILL BE) that special programs have been created that are designed to tell the teacher about how he should prevent the alcoholization of the younger generation. Initially, the programs will again be worked out in the educational institutions of professional orientation (colleges, technical schools, universities).

That is, the educational and scientific department, which is directly related to the verification of the level of professionalism of the modern teaching staff, as if declares that it is precisely in the qualification level of teachers that one of the components of child and adolescent alcoholism and its germs is hidden. It turns out that the level of training that teachers receive in the course of training in specialized universities and in the course of their further work is not enough to explain to a representative of modern youth that drinking alcohol from a school bench is irreparably harmful to health, apparently, officials of the Ministry of Education and Science believe so.

Somewhat doubtful message, especially if you consider that any adequate teacher, one who got into the education system not by chance, without any instructions from above, at least as part of extracurricular work with students, carries out a large amount of this very work on the prevention of youth alcoholism . Class hours, seminars, trainings devoted to the subject of a healthy lifestyle and the prevention of bad habits (including prevention of alcohol use) by teachers are conducted from elementary school. And in most cases, this is by no means a “tick-off” event, but rather an informative form of work that attracts the attention of the students.

But the Ministry of Education and Science, apparently, has its own point of view on this matter. "The Party" said: retraining, the teacher replied: there is!

Attention is drawn to the fact that the new (still under development) program of the educational department is positioned as if it was an innovation of clean water, and as if the pedagogical community ignored the topic of alcoholization of the Russian youth until now, and without taking any guidelines from above not in a position ... If the message of the Ministry of Education and Science is approximately the same, then I would like to clarify with the bureaucratic staff of this ministry how often its representatives actually attend schools and vocational training s institutions, and how often talk (well, just to be able to know the opinion) with real teachers, the range of which, as it happens, is not limited to a circle of the Third Ring Road in Russia? And I would also like to clarify whether the “new” retraining program for combating teen drunkenness with the invention of a bicycle would be possible, if only because there are already several very large projects in the country aimed at the same result.

One such project is "Sober Russia". The initiator of the project was a member of the Public Chamber of the Russian Federation Dagestan public figure Sultan Khamzayev. Last year, he created a coordinating council to protect citizens of the country from drugs, alcohol and tobacco dependence at the Public Chamber of Russia, and the council pays special attention to the issue of countering the alcoholization of the younger generation. 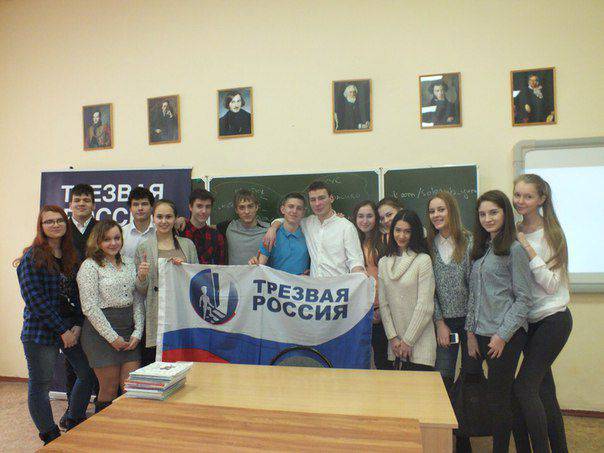 The activities of the council were picked up by the Russian regions, where the initiative groups created their local cells, working according to programs developed with the involvement of teachers and medical specialists. The representatives of the project developed a multimedia lesson in sobriety, which was distributed to educational organizations. Over the course of several months, over 80 of thousands of Russian schoolchildren met him.

Now the statistics: about half a million people die each year from alcohol-related illnesses in Russia. About 67% teenagers between the ages of 14 and 18 use alcohol products. Alcoholism is getting younger! Up to 78% of Russian teenagers who consume alcohol are “brought up” in the so-called dysfunctional families. There is a directly proportional relationship between the volume and frequency of alcohol consumption by the teenager and his academic performance, not to mention his physical and mental health. According to statistics, 92% of senior schoolchildren who consume alcohol do not demonstrate the high quality of knowledge, moving into the category of “strained troechnics”. For obvious reasons, the further life of these young people is most often associated with antisocial manifestations, adherence to the criminal environment, disability and early mortality. 40% of deaths between the ages from 15 to 29 years is caused precisely by the use of alcohol.

And this is not only a social problem, it is also a problem of economics. If alcoholism pushes adolescents to asocial manifestations, leading to early disability, then this automatically entails an increase in government spending. This in turn leads to the fact that getting super-profits from a very liberal approach to selling alcohol to young people (the “18 +” law for the sale of alcohol seems to be adopted, but in fact it does not always work) in fact leads to huge government losses, because it is the state that, in the end, has to maintain a whole army of disabled people, whose representatives became such as a result of the early alcoholism and disregard for their own health. After all, I would like to hope that the state apparatus is not profitable, so that the mind of a citizen becomes clouded from a young age, including with the help of easily accessible alcohol ...

Proceeding from this, the Ministry of Education and Science does not need to work on the invention of the bicycle, but simply take the positive seeds of the earlier public projects and carry out a truly consolidated work without trying to drag the blanket over. After all, the goal is the same: to protect the Russian youth from alcoholism, which at the same time will become one of the links in solving the demographic problem, and the problem of increasing the responsibility of the population for their own health. But after all, one teacher retraining can hardly be avoided here ...

Ctrl Enter
Noticed oshЫbku Highlight text and press. Ctrl + Enter
We are
Inequality in education. Only affordable education will make Russia a strong state.Is there a solution to the problem of patriotic education of young people? Private initiatives
Military Reviewin Yandex News
Military Reviewin Google News
104 comments
Information
Dear reader, to leave comments on the publication, you must to register.