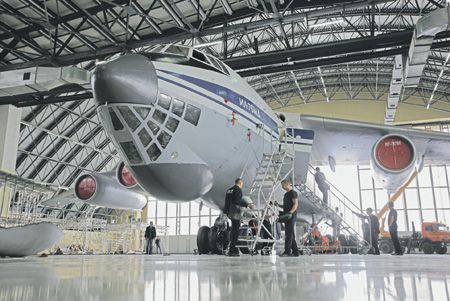 Repair and service aviation technology far from always occupies a place in the information space compared, for example, with the production, testing and operation of aircraft. The work of technicians, engineers and managers of aircraft repair structures is undeservedly in the shade, while the combat readiness of both individual aviation units and specific aircraft sides directly depends on the operation of the entire system. About work and tasks in the near future, IEE correspondent Roman SMIRNOV was told by Alexander BOBRYSHEV, vice president of the United Aircraft Corporation for the maintenance of state-owned aviation equipment.

- Alexander Petrovich, please tell us briefly about the work of the department and the tasks that the team solves.

- Our structure in the United Aircraft Corporation (UAC) was formed in 2013 year in the course of the implementation of the state order. Today we have 88 people who are busy sending to the repair and upgrading of aircraft and airfield equipment at 15 plants, which came to us in 2013 – 2014 management, as well as the manufacture of aviation equipment to the Aerospace Force (VCS) warehouses Russia. In 2014, we completed the scope of work for 4 billion rubles, about the same amount was done in 2015. At 2016, we form the scope of work with increasing volumes in this area.

I can say that after-sales service is not only the KLA, it is the cooperation in the fulfillment of the state order of all structures involved in this process: our subsidiaries, allied companies and operators. The level of serviceability of equipment depends on the qualitative determination of the need for repairs and on the timeliness and quality of work performed. If we talk about our contribution - raising the level of health, then we are talking about the release of repaired aircraft from factories. We completed the plan with the exception of a small volume. We didn’t deliver three Tu-142 of the Russian Aerospace Forces, untimely mastered the repair of the deck fighter Su-33 due to the omission of preparations for the repair process and did not launch two Su-27 aircraft due to the natural disaster in the summer in the Far East. The plant was forced to idle for about two months, in February 2016 of the year, we will hand over these planes, and Su-33 - in March of 2016.

Among the negative aspects it can be noted that our enterprises have performed an insufficient amount of work in the framework of technical supervision to restore the serviceability of specific boards. By the end of 2015, together with the Air and Space Forces of Russia, we formed an ideology of approach to the organization of this process. It is impossible today to repair just blocks without tying them to a specific aircraft (board). And since the break-up of defective blocks is large enough, unfortunately, efficiency in our work is not enough. Therefore, we are now on the eve of a new period all working together on this problem. December 15 approved the decision of the Deputy Minister to start work.

Speaking about the past planning period, we came to an understanding of the situation of a systematic approach: not only the repair of aircraft, not only the repair of units by number, but also the direction of all this activity on specific aircraft. Now the situation is such that the flight time of the aircraft has increased significantly, and it is necessary to keep all aviation equipment in good condition. Without a systematic approach and the elimination of gaps in the chain of interaction, this task is difficult to solve. I would like to note once again that service is a task that all structures solve on an equal footing: operators must submit a verified volume for repairs and procurement, the industry must provide repairs in a timely manner. We have questions on logistics: the unit for repair should not “travel” for a long time from the place of operation to the place of repair and back, and the existing regulatory documents are not aimed at reducing the time costs in logistics. I think that in the next period we will achieve the desired result in this regard, that is, the unit will be tied to a specific board and a systematic approach to the organization of the process will be implemented.

- Russia supplies military aircraft abroad. Is their maintenance and repair also your task?

- Here it is different. There are airplanes that are serviced abroad, for example in China. But the planes that we have supplied in our time, say, to India, are likely to be served in Russia. And our task to approach the turnaround time in 2016 – 2017 is to prepare for this work.

- Does the technician come to you for repair on time?

- Of course, there is a pause between the onset of repair time and the arrival at the plant, there are also opportunities to extend the operation until the onset of a critical period. The gap is determined by the state of the aircraft and the need for continued operation.

- How is it determined which unit to repair and which one to replace?

- You can not talk about one hundred percent replacement of the blocks, or the repair of all blocks. This is determined by the results of fault detection and, in fact, a decision is made on the future fate of the unit. On this account there is a set of standards, according to which we determine maintainability with the participation of all specialists. Blocks can be restored either at our repair base or sent directly to the manufacturer.

- Alexander Petrovich, how are things with imported components and their replacement? 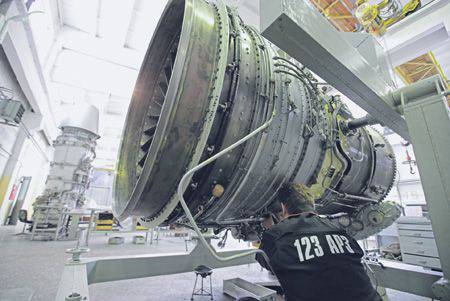 Successful solution by pilots of their tasks depends in many respects on the effective repair and restoration of aircraft engines. Photo courtesy of UAC

- In the aircraft of the state aviation there was a rather large share of components produced in the former republics of the USSR: Ukraine, Uzbekistan, the Baltic States, Kazakhstan, Belarus. We now have the main problem, of course, with the components of Ukrainian production. In these areas, the process of import substitution is underway, but this is not a simple matter. We have units that were manufactured in Ukraine, but were developed in Russia. This question is easier to solve. But there are components and developed, and produced in Ukraine. We select analogs with these details together with the design bureau. And some components have to be developed and put into production altogether.

- It is known that one of the problems in many industries, especially in complex and knowledge-intensive ones, is the existence of a certain personnel shortage. Have you encountered this?

- The volume of our work does not decrease and even grow. Both in military aviation and civilian, there is development and growth, therefore, the personnel structure requires replenishment. At most enterprises, unfortunately, we have a generation gap that needs to be filled. At the state level, trying to solve this problem. There are special solutions to the Military Industrial Commission, and decisions of the Ministry of Industry and Trade and the Ministry of Education and Science on training personnel for the defense industry sectors. We cooperate with our basic institutes, such as MAI, Kazan Aviation University, educational institutions in Samara, Novosibirsk. We also cooperate with educational institutions of secondary vocational education, the training of workers is gradually being restored. The problem is, we are looking for a solution.

- Is it possible to compare the reliability of our and foreign equipment by some parameters?

- I would not like to answer this question without having any experience in operating foreign military aircraft. If we talk about the operation of civilian aircraft, then at the dawn of the acquisition of “Boeing” we saw a larger raid, but this does not speak about the advantages in terms of reliability, it speaks about the totality of all the measures: service forms, personnel, equipment, and operation . There are areas in which we have adopted experience in the operation of civil aircraft and spread it in working with military aircraft.

Ctrl Enter
Noticed oshЫbku Highlight text and press. Ctrl + Enter
We are
Corporation and CompetenceThe state defense order in aviation: what should it be?
Military Reviewin Yandex News
Military Reviewin Google News
16 comments
Information
Dear reader, to leave comments on the publication, you must to register.