Bomb for the first chairman 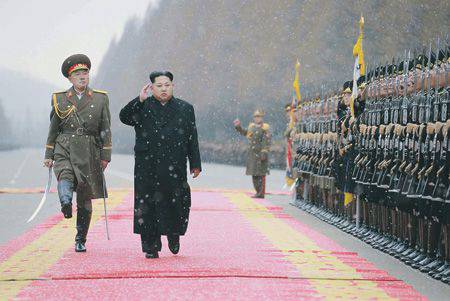 Recently, North Korea Central Television showed a report on the launch of the latest ballistic missile from a submarine. The progress of the tests was personally supervised by the Chief of the Korean People’s Army, Marshal of the DPRK Kim Jong-un, who at the time of launch was on a ship plying nearby. The spectacle, it should be noted, was impressive, but experts still find it difficult to say with certainty exactly when the test was conducted. In all likelihood, the 21 December 2015 of the year carried out an experimental launch, that is, earlier than the announcement of the testing of the North Korean hydrogen bomb, which caused quite a stir in international circles, was announced.

However, with the North Korean missile program is all more or less clear. A similar test has already been carried out by the DPRK last spring. Then the Musudan missile was launched from the submarine, which was created on the basis of an obsolete Soviet submarine-based ballistic missile. According to some reports, the DPRK has at its disposal 200 Musudan missiles. However, other sources call more modest numbers - just over ten. But it should be borne in mind that the maximum range of the North Korean missile is about 4000 km, so in theory, "Musudan" can threaten not only South Korea, but also Japan.

But with the underground thermonuclear explosion, which caused tangible seismic vibrations in the district, there is no complete clarity. So plainly and incomprehensibly, did Pyongyang test a hydrogen bomb or was it a hoax on a global scale, timed to coincide with the next birthday of the “great heir” Kim Jong-un of the DPRK State Defense Committee. In confirmation, the North Korean media published a photo of their leader signing in a solemn atmosphere an order to conduct a thermonuclear explosion, and even published a video of underground tests. Later, however, it turned out that the test shots of the hydrogen bomb were taken from the Soviet archives and they absolutely have nothing to do with the people's democratic part of the country of morning freshness.

But is it really important what exactly they experienced in the DPRK? It is well known that North Korea has long possessed certain nuclear technologies, which it inherited from the USSR, and at that moment, when the Union was falling apart into pieces and everyone in the Soviet arsenals grazed all over, and our nuclear minds scattered around the world wherever something paid. This circumstance, even now with reference to Pyongyang’s assertion of testing the hydrogen bomb, gives the West certain grounds to assert that the DPRK is turning into a nuclear monster with a light hand from Moscow.

Immediately followed by a "defensive" reaction from across the ocean. Above the Korean Peninsula, the American strategic missile carrier B-52 has already made a “circle of honor,” moreover, it was promised that a squadron of the fifth generation F-22 Raptor and one of the aircraft carriers would soon join him, and on the border between the two Koreas mobile THAAD anti-missile systems, designed for the transatmospheric interception of medium-range missiles. It is also possible that the deployment of American tactical nuclear weapons in South Korea weapons.

In general, a complete set. And this was to be expected, since the United States had long been looking for a convenient excuse to strengthen its military presence in the Far East — and here is such a “gift” from comrade Kim Jong-un himself. Not to use them would be a sin ...

Of course, part of the blame for the fact that the DPRK, bypassing the Nuclear Club, has become a nuclear missile state, lies on the USSR, which actively imagined itself a “dove of peace”, and on Russia as its successor in a straight line. But what is remarkable: only the United States and the DPRK voted 6 December 2006 of the year against the resolution of the UN General Assembly, emphasizing the need for the earliest signing and ratification of the Comprehensive Nuclear Test-Ban Treaty.

Why Washington was in such a bad company, the secret is small. Field tests provide more material for the improvement of nuclear weapons than virtual computer simulations, and a nuclear bomb, whatever it says about high-precision weapons and its unique capabilities, is still the most convincing foreign policy argument. But if the American choice is dictated solely by hegemonic considerations, then the current North Korean leader has completely different reasons, at least for world domination, he is unlikely to claim. Or so far no claims.

It should be noted here that Comrade Kim Jong-un's reputation is not the most decent: either he will arrange a provocation on the 38 parallel, then he will shoot someone from his family and friends or subordinates from an anti-aircraft gun ... But in general this young man the youngest in the world, the head of state), spoiled, as is commonly believed, perverted by socialism, an excellent European education - graduated from an international school in Bern. Therefore, it can be assumed that not only Juche idea (declaring self-reliance), but also personal experience with the West led him to believe that nuclear weapons guarantee independence and state integrity more than international institutions and agreements. And the most remarkable thing is that he is not alone in this choice and, most importantly - not original. 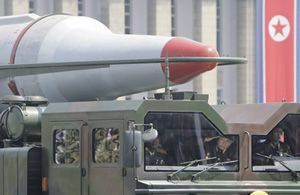 DPRK missile forces are preparing to strike at US military bases in South Korea and the Pacific. Reuters Photos
Much earlier than North Korea, a nuclear course was followed by India, Pakistan, China (also with the filing of the USSR), Iran and the same Israel (the French trace is traced here). And although Tel Aviv’s membership in the Nuclear Club does not refute, but does not confirm, everyone knows that the Israelis definitely have atomic weapons, and in sufficient quantities. And then a logical question arises: why Israel, which, despite all the nuances and disagreements of recent times, is listed as the closest partners of the United States, was not satisfied with the American “nuclear umbrella”? The answer is obvious: because its own nuclear bomb - and hydrogen, I suppose, even more so! - much closer to the body, and in general there is no great faith in the allies, and even more so in international institutions that supposedly stand guard over world peace. And never was, starting almost from the end of the Second World War. And the UN, which arose after the decision of the “big three” in Yalta, was from the very beginning something of a geopolitical scenery, behind the scenes of which each was playing his own game. Another confirmation of this was the recently declassified plans for delivering nuclear strikes on cities, villages and industrial facilities of the USSR: that is, Europe has not yet had the euphoria of victory over German fascism and Japanese militarism, and Washington already had a finger on the atomic trigger.

Of course, the degradation of the UN and other international institutions was also due to the fundamental change in the world order caused by the disappearance of the Soviet Union from the political map of the world. It is clear (although Russia is resisting strongly) that a different format and another international regulator are needed (sooner or later it will happen anyway, because it’s impossible to live forever with a glorious military past). But the main reason for the degradation of the UN is, all the same, that this international instrument has become a stumbling block on the path of the United States to absolute world domination. And Washington decided to just ignore it. Well, after the UN was unable to protect neither Yugoslavia, nor Libya, nor Iraq, nor Syria, there was nothing left for the potential targets of American scrutiny to do but draw the appropriate conclusions.

No one argues that North Korea is perfection itself in the political and in all other senses, in a word, the regime. But who wants a repetition on its territory of the Yugoslav or Iraqi script? It can be assumed that Kim Jong-un is also not eager to repeat the fate of Muammar Gaddafi. That is protected as it can, even reached the thermonuclear arguments. And the world community in the dialogue with this exalted state leader does not have many options.

First: leave it along with the hydrogen bomb alone and not tease with sanctions. You can even feed a little bit (which, perhaps, Kim Jong-un and seeks first of all), so that the internal situation, God forbid, does not spill out in some apocalyptic scenario. The second: to lay down the whole world and disarm. But a North Korean leader, locked in a corner, could easily arrange a nuclear catastrophe, if not global, then on a regional scale, which would also affect Russian territory. In this case, it’s not at all necessary to talk about the Korean Peninsula itself, Japan and China will not stand aside either ...

By the way, China has already felt the urgency of the issue and, as stated by the Chinese Foreign Ministry spokesman Hua Chuning, insists on resuming the six-party talks, which "remain the only effective method of resolving the North Korean nuclear problem." In turn, the situation with the alleged tests of the DPRK hydrogen bomb during an emergency meeting is going to discuss the UN Security Council. But will this “gadget” help Pyongyang, who is affected by a thermonuclear infection, is a question of questions. Probably Moscow’s diplomatic abilities in this case is a more radical means, moreover, it has been repeatedly tested.

Let us assume that this time Russian diplomacy will succeed in persuading the “thermonuclear Kim” through its own channels on acceptable terms not to play with fire. But where is the guarantee that another leader of a state declared to be a rogue state living under the fear that American cruise missiles carrying democracy on their wings will not want to get at least a nuclear bomb to start at any moment? Such a guarantee simply does not exist.

On the eve of World War II, the great physicist Niels Bohr believed that the creation of nuclear weapons would require all the efforts of a country like America and decades of hard work. But he was wrong: the world's first nuclear device appeared just four years later. With current technology, things can happen much faster. There are already dozens of countries that will, if they really need to, acquire a weapon of mass destruction. And it’s not a fact that it will be possible to come to an agreement with all of them, as, for example, with Iran. So, maybe something to fix in the UN and continue to live by international rules? Or does Washington have other suggestions? ..