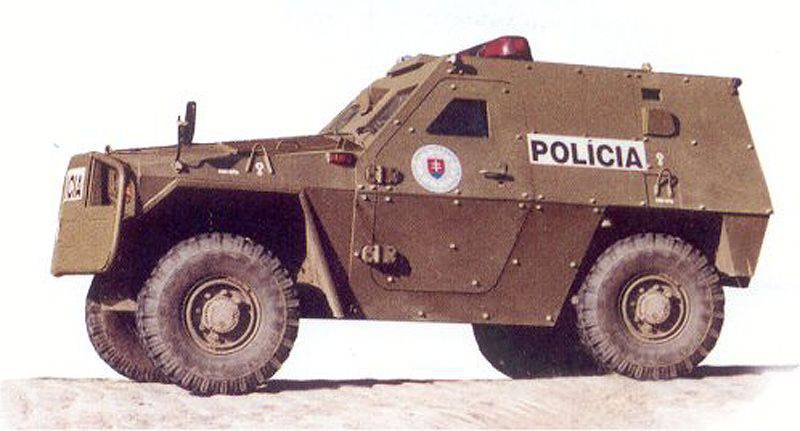 
In 1995, the development of the Aligator 4x4 light reconnaissance armored car began, the first three prototypes were made in November 1996.

Financing the development and design of Aligator prototype machines was provided by the Kerametal Company Limited, and the Transmisie Company manufactured these prototypes.

Armored car Aligator was originally designed to perform a wide range of tasks on the battlefield, including reconnaissance and operational management.

To reduce the cost of development and production, where possible, Aligator used proven commercial components, such as the Deutz engine, Renk 606 automatic transmission, as well as the suspension.

The first prototype of the Aligator light armored reconnaissance vehicle was first shown to the public at the start of 1997.

At the beginning of 2001, it was announced that DMD Mobiltec would manufacture the first eight production of Aligator 4x4 armored vehicles for the Slovak army at the end of 2001, but these deliveries were fully completed in 2003. Thus, the Slovak army became the launch customer for the Aligator armored car.

The first machines of the Aligator of the Slovak army were in the configuration of the mobile control point MCP (Mobile Command Post) had a set of additional reservation of ceramic armor and provided protection against 7.62 x 51 mm armor-piercing bullets.

The car accommodates four people, the commander, the driver and two others. The machine is completely floating, on the water in motion is driven by a propeller mounted on the rear under the hull.

It is estimated that by the end of 2012, approximately 100 Aligator 4x4 machines were manufactured for the local market, but there were no orders from foreign customers. 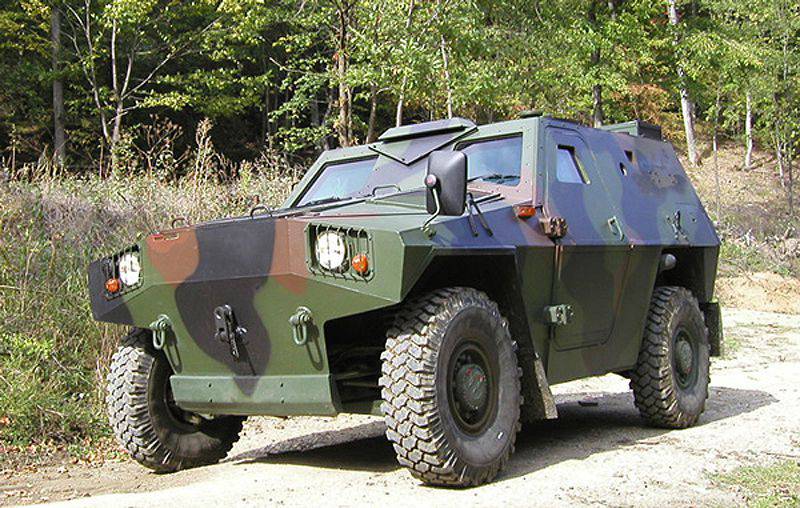 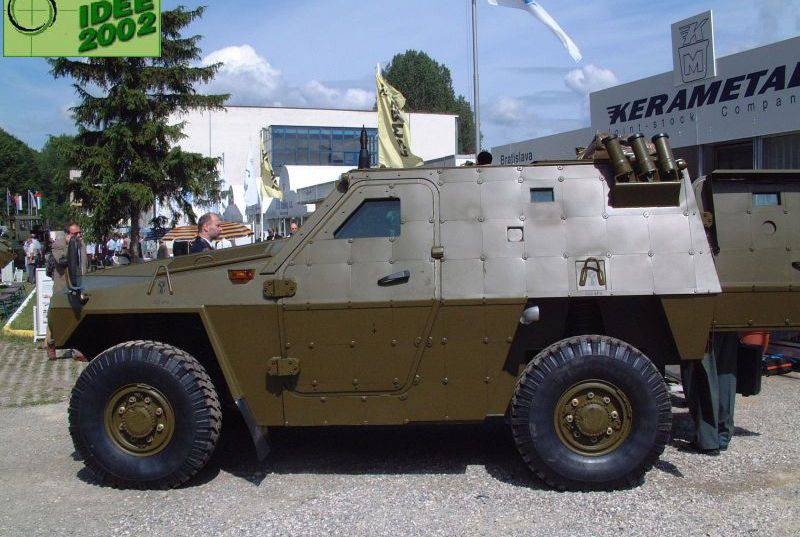 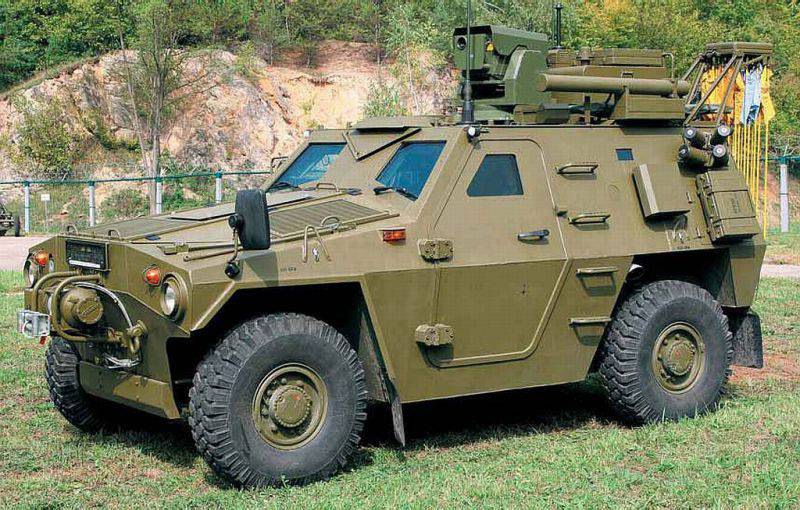 The body of the Aligator machine is all-welded from armored steel, which provides protection against 7,62 mm caliber armor-piercing bullets and shell splinters.

The bottom of the double thickness of the habitable compartment in order to increase the level of mine protection.

The engine compartment is located in front, the crew is located behind it. The standard commercial diesel engine Deutz BF6 1013 with water cooling and with intermediate cooling of charge air is connected to the Renk 606 automatic transmission with the possibility of manual override.

The commander is on the right, the driver is on the left. The driver has a monoblock hatch with a rooftop periscope installed on the roof for front view and observation. The commander of the machine has a round low-profile turret with a round hatch that opens back. An 7,62-mm or 12,7-mm machine gun can be installed here.

The commander and driver have front windows made of bulletproof glass and side doors that open forwards. At the top of each door a window is cut into which bullet-proof glass is inserted. All windows have the same level of protection as armored steel armored hull. Another arrangement of hatches on the roof is also possible: two hatches for the commander and driver in front and one opening back in the troop compartment.

The troop compartment is located at the rear of the vehicle, landing and disembarking is done through a large rear door that opens to the left; in the door there is an embrasure for firing and a surveillance device.

On each side of the troop compartment there is an embrasure and viewing device, closer to the stern on the roof there is a hatch opening back. If necessary, three launchers of electrified smoke grenades can be installed along the sides of the hull.

Optional equipment includes a kit for the water, which allows the machine to move on the water due to the propeller installed in the stern of the machine; air conditioning; protection against weapons of mass destruction; centralized tire inflation system that allows you to adjust the pressure in the tires, depending on the type of terrain; winch (cable length 30 meters, thrust force 3000 kg); various communication equipment; various types of day and night surveillance equipment for the commander and the shooter; GPS system; auxiliary generator; and various weapons systems.

A single MOWAG MBK2 turret armed with an 7,62-mm machine gun and a FORTIS (Forward Observation and Reconnaissance Thermal Imaging System) advanced viewing and reconnaissance system operating in the 8-12 μm range can be installed on the machine.

This version of the armored car Aligator received the designation ORP (Observation and Reconnaissance Post). The MOWAG MBK2 turret was manufactured in large quantities for Denmark and Switzerland for installation on the MOWAG Eagle 4x4 reconnaissance vehicle.

MOWAG is currently part of General Dynamics European Land Systems and does not produce these turrets.

The ORP version of the Aligator armored car can receive other turrets and turrets optimized for reconnaissance missions.

This option has a slightly raised roof in order to increase the internal volume, it accommodates six people: the commander, the driver and four in the troop compartment.

These PCM Aligator armored cars also have additional booking kits, which provide protection against 7.62 x 54 mm armor-piercing bullets, and there are embrasures and corresponding viewing devices on the sides and the stern.

Two of the first eight serial Aligator machines were converted into mine reconnaissance vehicles. A sensory kit is installed in front of the vehicle, and the crew is naturally placed under armor protection. Works performed by the company VOP-27; These vehicles are intended for use by units of the Slovak army operating as part of the peacekeeping force. This version of the Aligator received the designation Aligator ZV.

During operation, the Vallon VMV-8 touchscreen kit is installed at the front of the vehicle. The crew receives data from the sensors, which are displayed on the display over the map of the area. When the kit is not necessary, it fits on the roof of the Aligator.

The option was designed to meet the needs of units deployed in peacekeeping operations under the auspices of the UN or other security organizations. Various armament systems and surveillance equipment can be installed on the machine.

At least two vehicles made for the Slovak Army were equipped with the DD-CWA-A remote chemical detector made by the Military Institute of Technology.

In addition to the DD-CWA-A detector mounted on vehicles, there is also a manual version of the DD-CWA-S. The detector is capable of detecting various chemicals, including tabun, sarin, soman, Wi-X and mustard gas. 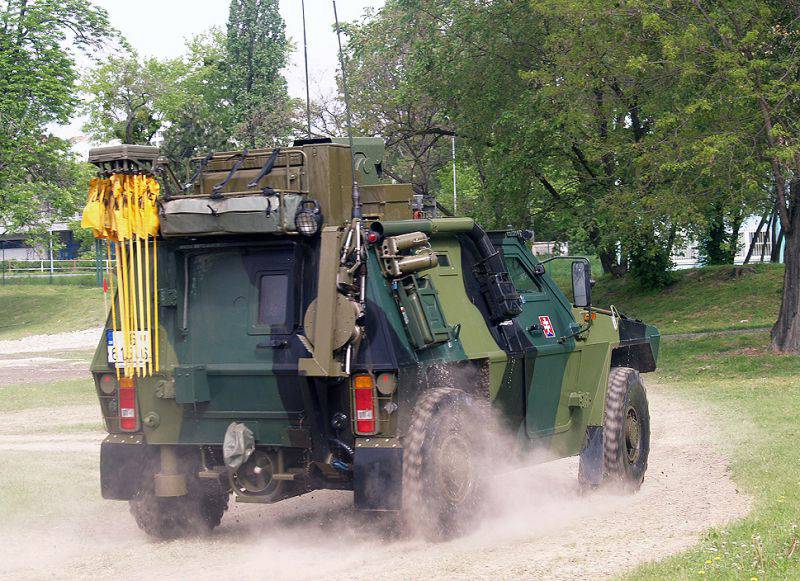 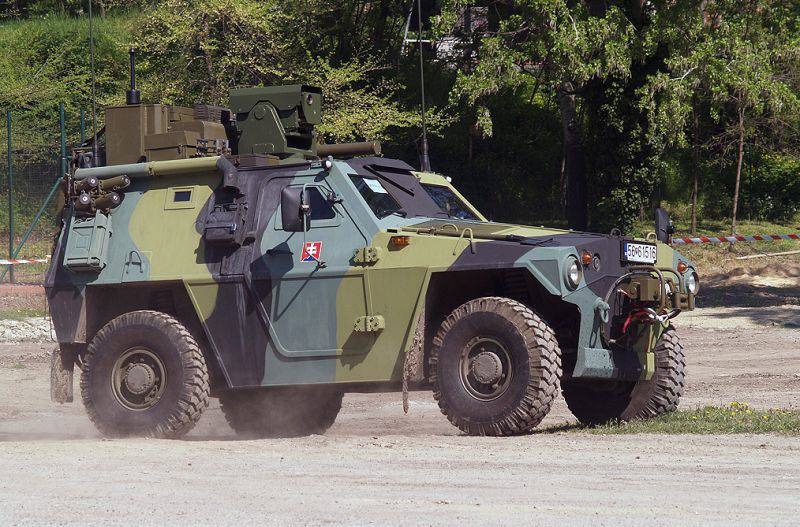 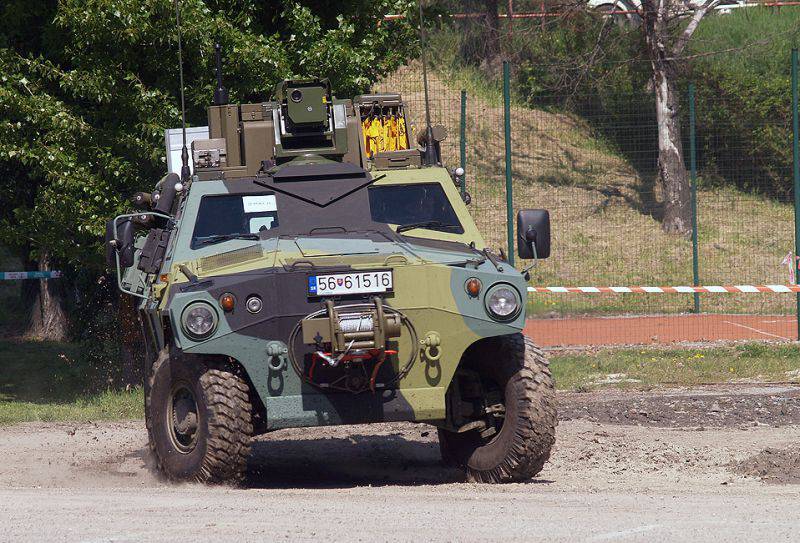 Studies have been conducted on the extended version of this car with two additional wheels. It would have a larger internal volume and, consequently, a greater carrying capacity. But the experimental version in the 6x6 configuration was never made. 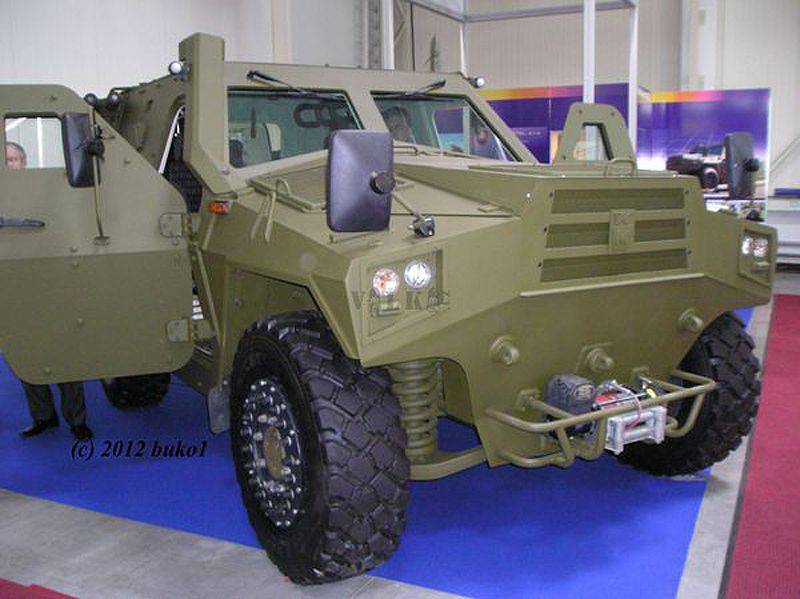 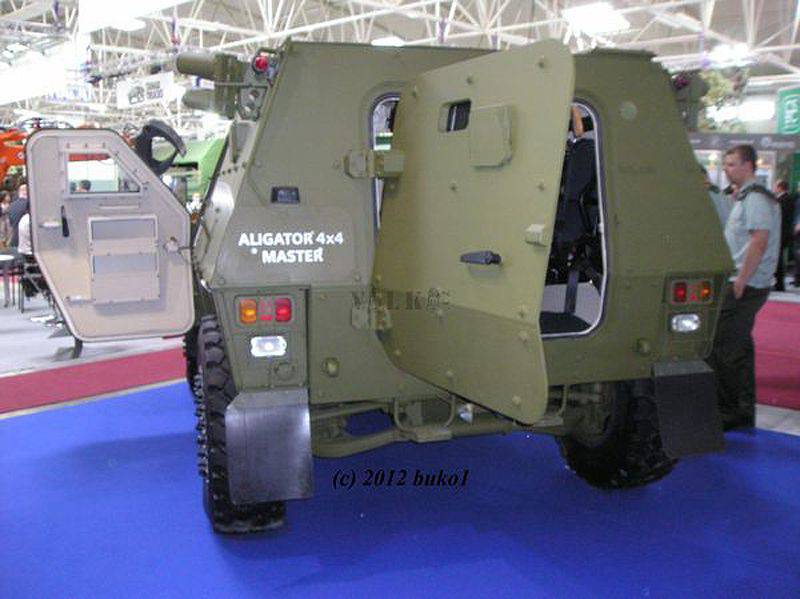 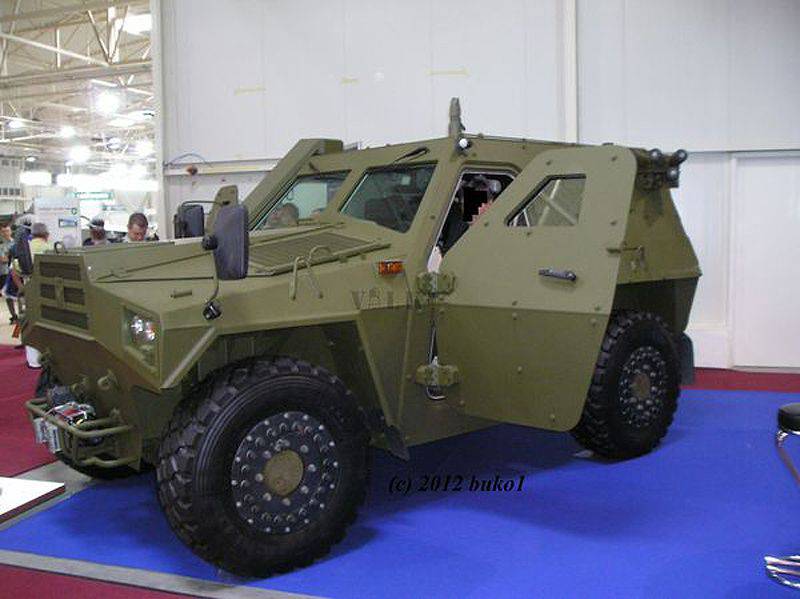 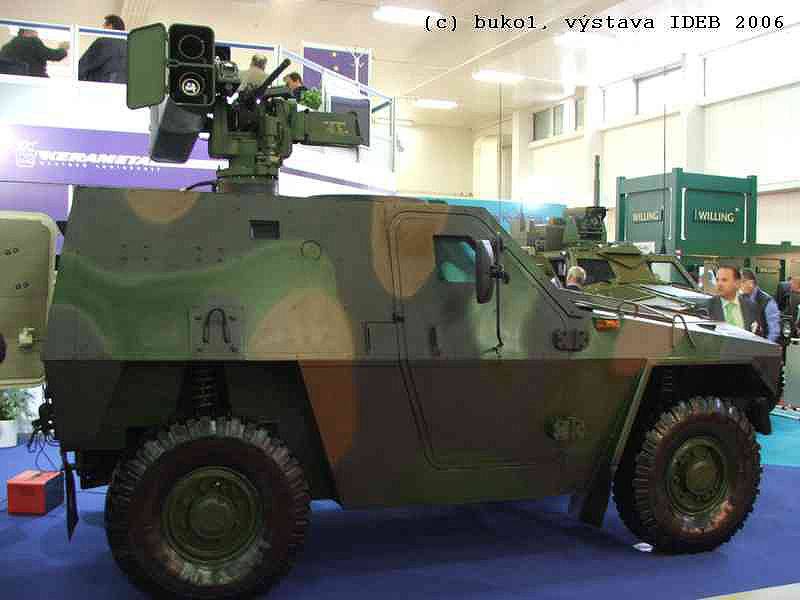 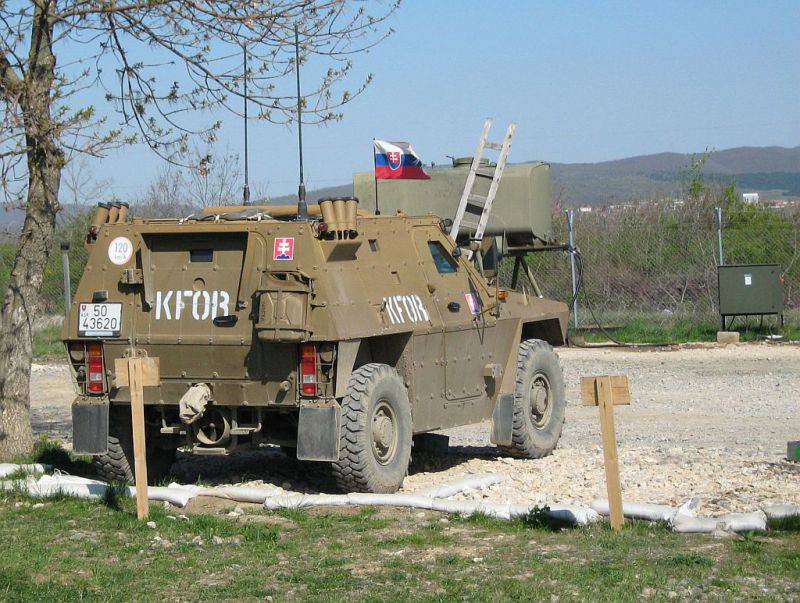 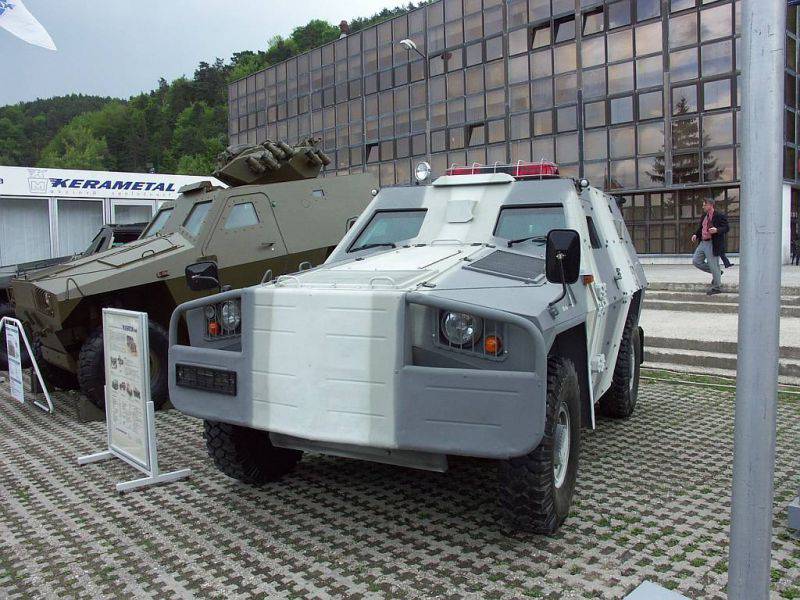 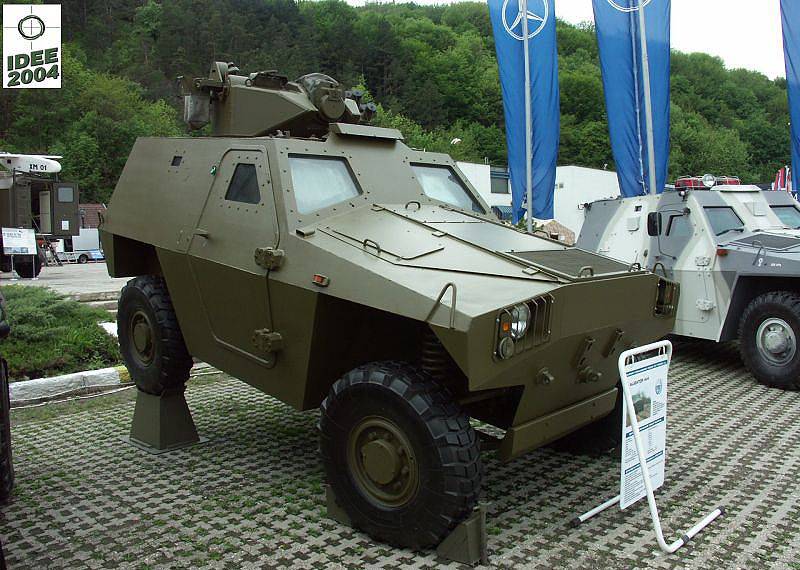