Will the US lose in the second cold war? 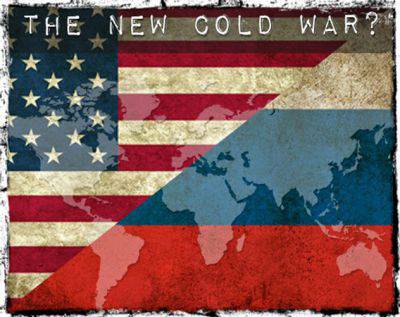 What does the USA shine in Second Cold War? Losing or winning? The answer consists of many terms, which together do not necessarily give Washington a “winning” point. Some western analysts are inclined to assert that, despite the defeat in the “first cold war” of the USSR, Russia will win the second such war.


On this subject argues analyst Steffen Woll, whose interests extend including to the foreign policy of the States of the West and the Middle East. He believes that the Americans will lose this time. His new article recently appeared on a popular Canadian portal. Global Research.

The United States may emerge defeated from the “Second Cold War”, the author is sure.

From 1990 to the present day, American politicians have waged an obvious hidden war, the aim of which is to “curb” the political, economic and military influence of the “former adversary”, the analyst notes. Chechnya, Ukraine and Syria - these are today's “key points”, where the logic of the “second cold war” develops.

The "unipolar" American domination, which arose after the collapse of the Soviet Union, provoked an increase in tensions in the world politically and militarily. The world has developed a trend of deepening inequality and injustice. The situation on the planet has become much more complicated and alarming.

Russia in the 1990's I had enough of the happiness of democracy: economic turmoil, the growth of organized crime, corruption, oligarchy and its control over the major media. According to the author, the real situation on the territory of the former Soviet Union in 1990's was fundamentally different from the picture that the American elites gave out to the public. There was no “golden age” in market Russia, there was no “new-found democracy” and “the rise of the private sector”. It was different: the plundering of the country by oligarchs, ruthless criminal groups, kleptocratic politicians, corrupt military and so on. The country was destabilized and reached the state of "mortally wounded enemy."

According to Woll, Russia still didn’t completely collapse: Yeltsin’s successor, Vladimir Putin, ended up putting an end to the activities of “businessmen” like Roman Abramovich and Berezovsky.

Putin's predecessor, the author of the material directly calls the "the alcoholic Yeltsin". He describes his rule as “chaotic and purposeless.” Nevertheless, in the USA these years were considered as “mostly positive time”: after all, “East and West united their ranks”. In fact, it was a lie: in those years, neoconservatives with the help of brain trusts were disorganizing and selling Russia right and left — both politically and economically. Vladimir Putin, Woll said, “still managed to stop the downward spiral” in many areas. However, Western elites paint Putin as a dubious authoritarian leader, at best, a “semi-democrat.”

Today, Russia has become, in the full sense of the word, a capitalist country, moreover integrated into the global economy. There is a mutual dependence of Russia and the European Union. The military influence and budget of the Russian Federation (52 billion dollars) are insignificant in comparison with similar expenses of the USA (598 billion dollars in the 2015 year). In addition, since 1991, Russia has had to close or leave many of the important military bases and ports due to the expansion of NATO to the east.

However, the size of the territory and the presence of an arsenal of nuclear weapons makes Russia one of the "main threats" to American national interests. So say in Washington. This is confirmed by the fact that for three and a half decades, the US has secretly supported radical Islamist movements with the aim of permanently destabilizing the Russian state, forcing it to get involved in "dirty" and protracted conflicts. The 1980 Soviet-Afghan war scheme is still topical; it was used in both Chechen wars. The US media is dancing to the tune of the White House: from the first Chechen war (1994 year), Russia's long struggle against Islamic terrorism was largely ignored by Western publications, even after 9 / 11 in the United States.

After 9 / 11, there are three key elements of the strategy to slander Russia, Woll writes.

First, specific leaders or members of the government are labeled as “authoritarian” or “undemocratic” types (first of all, Vladimir Putin).

Secondly, Chechen terrorists with ties to Al-Qaeda, and not only them, are designated as representatives of "oppressed peoples" seeking "freedom and democracy."

Third, “human rights violations” that emphasize Western intervention or the imposition of economic sanctions are emphasized.

If all three points are present, the West can go on “justified” violation of the borders of a sovereign state. And in this case, the United States does not even need a UN mandate. The United States is posing as a "knight in shining armor," a "fighter for human rights." In reality, a secret goal is achieved that fits into the logic of the “second cold war”: the weakening of Russia at the expense of reducing its influence, for example, in the “near abroad”, at the expense of infringement of economic and strategic interests.

The same “trilateral” strategy is used by the United States and the West in general to justify NATO interventions. So it was in Iraq (2003), Libya (2011) and Syria (since 2011). Interventions were “legitimized” by the banners of humanitarian aid and speeches about the removal of “authoritarian” rulers and “tyrants” from power. This kind of intervention led to the death of approximately 500.000 people in only one Iraq.

The same was done with Yanukovych in Ukraine. President Viktor Yanukovych was accused by the West of suppressing the democratic “euromaidan”. The media in the US and the EU attacked him with propaganda charges of “abuse of power” and “violation of human rights” and at the same time began to deceive Ukrainians with promises to accept the state into NATO and the EU, which would make Ukrainians gain a lot of benefits. Yanukovych fled, and as a result, the government was replaced by an ultranationalist, anti-Russian and pro-Western: three in one.

Again, this campaign, the author believes, had nothing to do with real humanitarian assistance or concern for democracy and the integrity of the country. American politicians simply hoped to suppress Russia's geostrategic influence by removing the Black Sea naval bases fleet from the Crimea. Meanwhile, these bases, mainly located in Sevastopol, are "the home of the Russian fleet for over 230 years." Any expansion of NATO towards these bases, Russia should consider as a direct threat. Nonetheless, "история”, Drawn in the Western media, depicted defending these bases as“ the occupation of the sovereign territory of Ukraine, ”which, in turn, was used as evidence of Russia's“ aggressive ”and even“ imperial ”aspirations. In fact, Ukraine and Russia signed a corresponding treaty regarding the Black Sea Fleet of the Russian Federation as far back as 1997, and its operation would end in 2017.

Now about Syria. According to the analyst, American politicians and the media accountable to them expect that, participating in the Syrian war, Russia, trying to help the Syrian government in resisting the West, Saudi Arabia and Turkey, will be on the verge of a military and economic catastrophe "comparable to" the consequences Soviet-Afghan war. And not without reason, Mr. Obama and Mr. McCain protested not so long ago about the infliction of airstrikes by Russia on the positions of "moderate rebels". But McCain and Obama, apparently, have no idea that the one who looks like a terrorist, speaks like a terrorist and behaves like a terrorist, he is a real terrorist. And not at all "opposition activist."

The geopolitical confrontation of recent years heralds the beginning of a new period of the Cold War in political history, Woll said. US foreign policy is currently built on the “rebirth” of offensive strategies. This can be seen in the invasion of the Eastern European states into the NATO bloc, the imposition of an agreement on the Trans-Pacific partnership in the economic sphere and the “aggressive patrolling” of the waters of the South China Sea.

Recently, the influential journal Foreign Affairs wrote about the rules of the Cold War based on the thesis: who will turn away the first. This rather accurate thesis, which described the former cold war (between the USSR and the USA), may be one of the reasons why the USA may lose in the new conflict.

The fact is that Washington has not yet understood that a new war is not at all built on the principle of "who will turn away the first." This is not at all the same thing as the manipulation of Russia, which led to the success of the United States in the 1990s.

The development of the Russian Air Force in Syria was to show the American establishment that Russia in 2015 did not stand by the sidelines and did not look with envy at the "disastrous policy of the United States and its allies in the Middle East."

Mr Obama, who said that “we don’t have any chess tournament of superpowers,” either lied or “demonstrated complete ignorance” of his government, not realizing what American actions in Ukraine, Syria, and the South China Sea would lead to and other hot spots of the “second cold war”. Both options do not promise the United States "nothing good in the future," Woll said.

An increasing number of Western analysts, we add, criticize the international policy of the White House, which still sees itself as the hegemon of the entire planet. An increasing number of experts ridicule B.H. Obama, whose "peacekeeping" actions and support with the money and weapons of the "Arab Spring" led to the disintegration of the Libyan state, the destruction of Syria, the formation of the IG terrorist group and the new "cold war" with Russia. At the same time, Obama succeeded in Afghanistan: he will go down in history as the president of the United States, in which the ISAF troops suffered a complete collapse, in which part of the territory was regained by the Taliban, and in the end, Afghanistan turned into an advanced opium state.

Of course, in American history textbooks, the Obama era will be presented as a triumph of democracy on the globe - from Ukraine to the Middle East and Africa. As for the problems that authors of textbooks cannot get around, they will be assigned to Russians. Or Putin personally.

Observed and commented on Oleg Chuvakin
- especially for topwar.ru
Ctrl Enter
Noticed oshЫbku Highlight text and press. Ctrl + Enter
We are
Tactical lessons of the last two wars of Iraq for an all-arms commanderStrangulation: the context, conduct and consequences of the American naval blockade of China
Military Reviewin Yandex News
Military Reviewin Google News
95 comments
Information
Dear reader, to leave comments on the publication, you must to register.