Why do you need a shell in the shape of a triangle? Samnites against Rome

January 22 2016
93
The power of the great Rome, which created in Europe the first empire that existed for such a long time, eclipsed for the historians the fate of many other peoples who lived in Italy "before Rome" and "simultaneously with Rome". Meanwhile, the culture of these peoples largely influenced Rome. 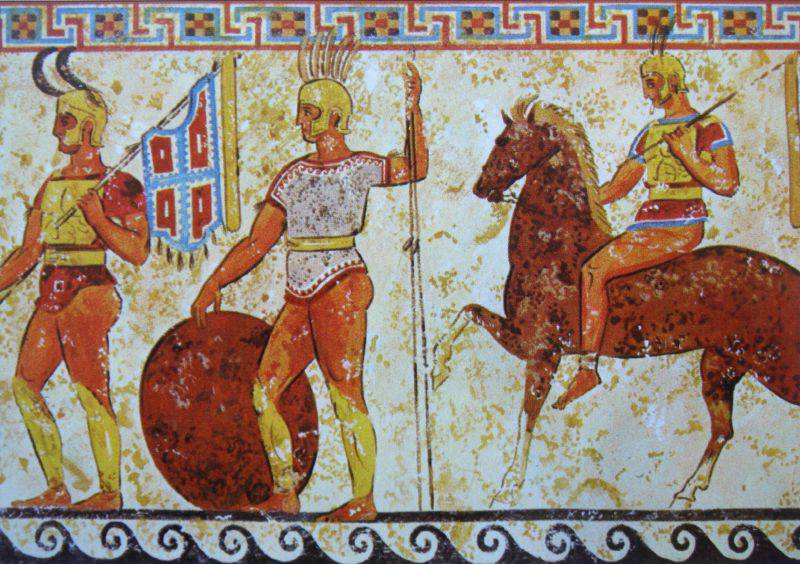 Mural from Paestum. Armor and weapon Samnite warriors. It is indicative that a warrior with a round shield has two spears with belt loops, that is, this weapon is for throwing. Museum of Naples.

In one of the articles published here, it has already been noted that Rome is a “imitator state” that successfully borrowed and developed the achievements of other nations. A scutum shield, a Hispanic sword, a gamata chainmail (“Gallic shirt”) are just a small part of what they have taken from others. And there was a “export of brains” and “workers,” a violent, true. And also “borrowing” of statues, paintings, gold and jewels. 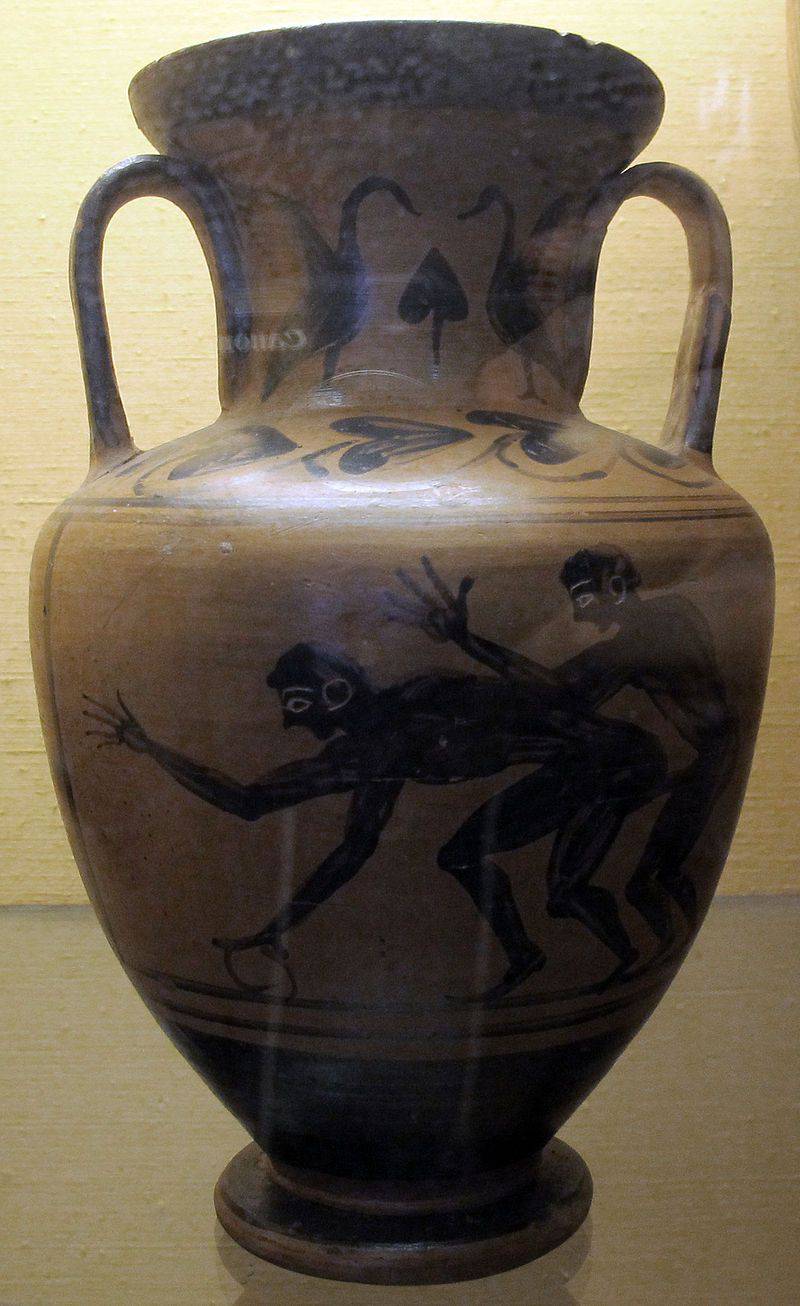 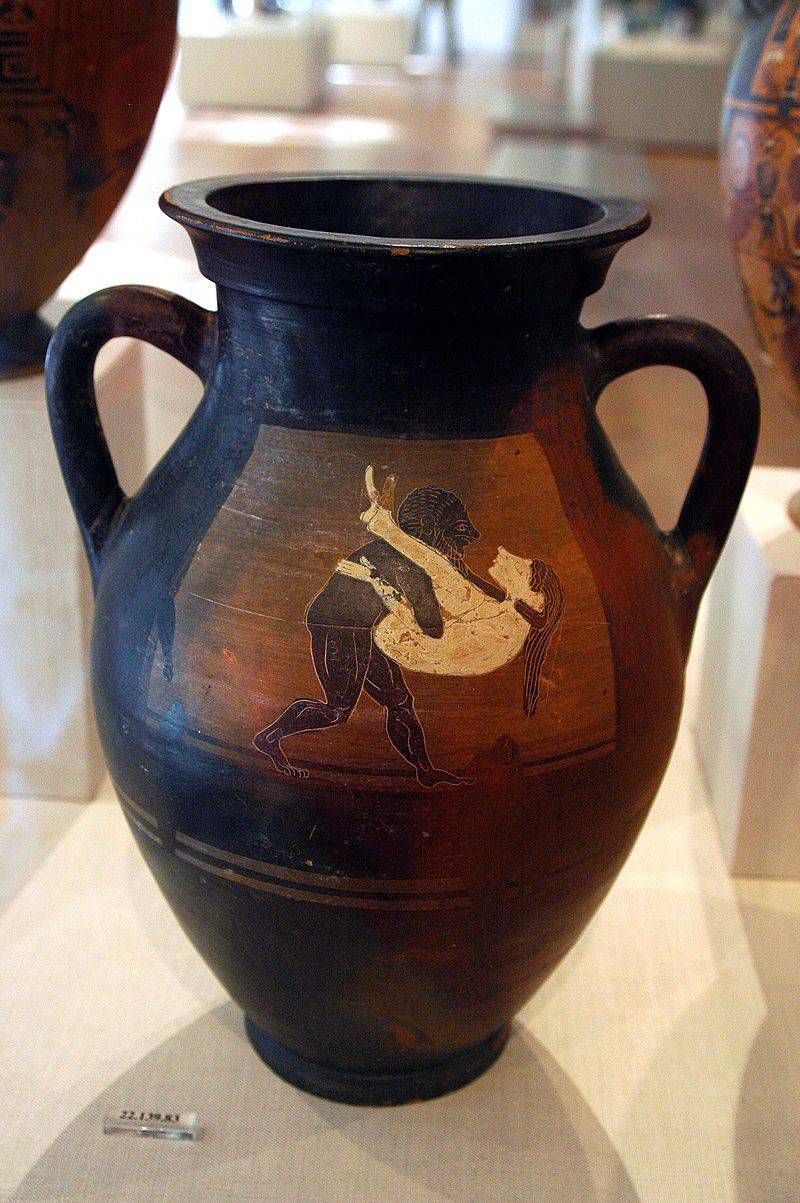 Another amphora on the same topic. Metropolitan Museum, New York.

But while Rome had not yet gained strength, many other nations lived next to it on the territory of Italy. For example, there developed a civilization of the Etruscans, which had a great influence on him, moreover, Rome itself was under their authority. The Romans borrowed from them the arch, gladiatorial battles and chariot races. However, later the inhabitants of Etruria received Roman citizenship and ... dissolved among the Romans. Today we can judge them only on the basis of rich burials and ... everything! 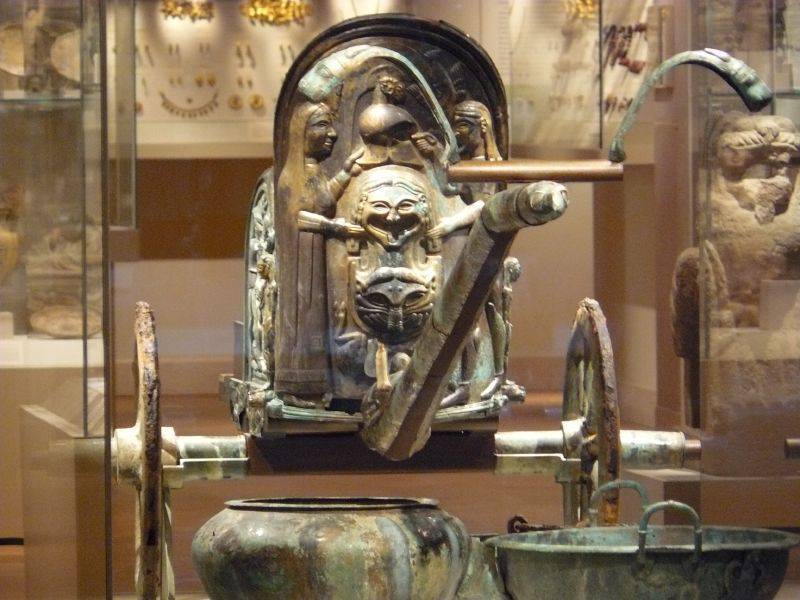 However, militarily, we are primarily interested in military история, the Etruscans did not represent anything special. The weapons that are found in the tombs are traditionally of the Greek type and belong mainly to phalangite warriors. True, they had a characteristic form of armor in the form of a round chest plate, fixed on four straps. But more often they used classical linen and anatomical bronze shells, often covered with tin. Known to the Etruscans was the chain mail. 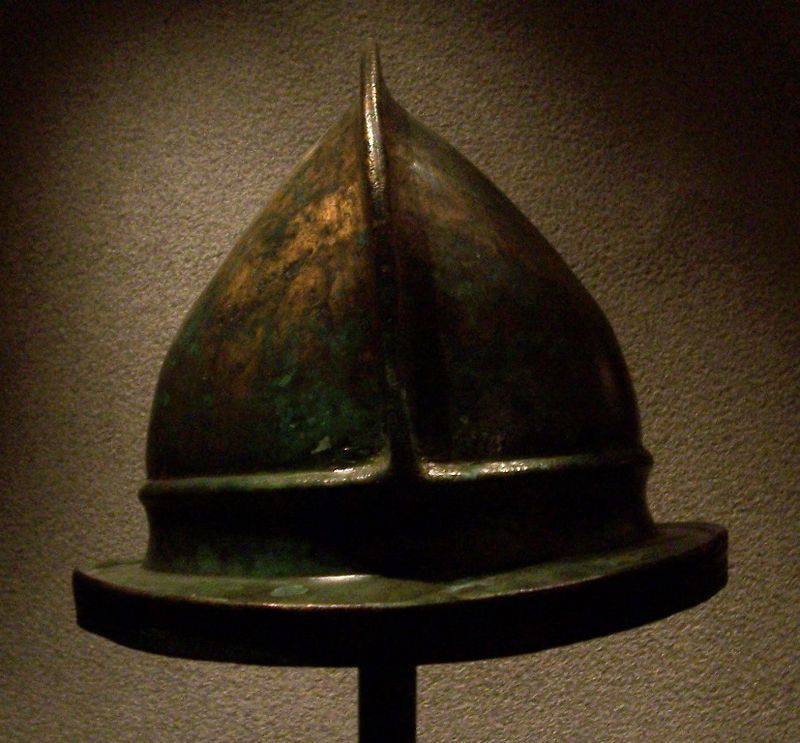 The most typical helmet was a Negau-type helmet, named after the village in Yugoslavia, where a lot of such helmets were found. It is known that they had to know, who fought on chariots and the infantry from the people of "ordinary".

However, from the point of view of military history, the other Italian people, who were very different from the Romans in both language and culture, are self-interested, but still more interesting. The territory on which they lived was called Samniy, the Samnites spoke in the Oka dialect, and the political form of their organization was the Samnite Federation, which was a union of the tribes. 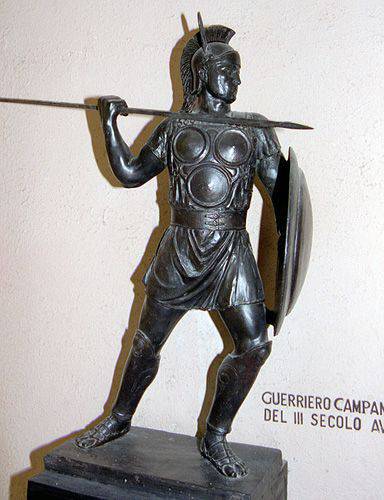 Now and then the Samnites fought against the Roman-Etruscan army of the first Roman kings, and with varying success. It is known that during the reign of Tsar Tarquinius the Ancient, it consisted of three parts: a phalanx consisting of Etruscans, the Romans themselves and the Latins. Titus Livius left us with an interesting description of the Samnite warriors, who according to him looked like this: they had a helmet with a crest, and I hang one on my left foot. The shield is not round, but in a somewhat unusual shape - wide and flat at the top to protect the chest and shoulders, but tapering downwards. He further writes that there were warriors with golden shields, and were with silver ones. “Gold” wore multicolored tunics, gilded sheath and sash, and “silver” - white linen tunics and silver trimmed equipment! 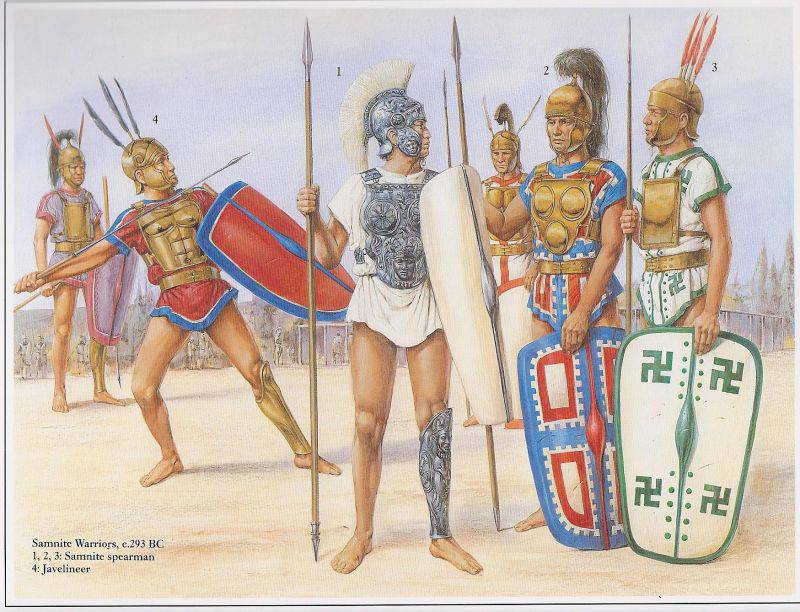 The English historian Peter Connolly states on this point that in this case “History” Livia cannot be believed, since he describes not the soldiers, but the Roman gladiators of the “Samnites”. At the same time, there are many images of Samnites that allow one to accurately reconstruct their appearance. There is also a statuette "Samnitsky warrior" from the Louvre. He has an attic-type helmet on his head, a three-disc chest armor and leggings that blend well with the images of a Samnite warrior on a vase from Campania, which is in the British Museum. 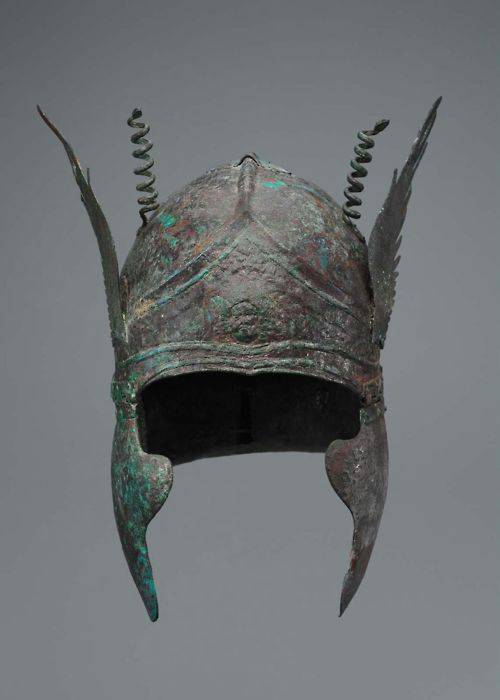 Greek helmet from southern Italy end of the IV. BC. Museum of Fine Arts Boston, USA.

All this allows us to reasonably reasonably say that the Samnite weapons complex was very different from the Roman one, so that it was easy to distinguish between them in battle. Let's start with ... the belt worn by the Italians (not only the Samnites!) Who represented a strip of bronze 8-12 cm wide, fastened with two hooks. And there were several pair of holes on it, which made it easy to fit it on the figure. 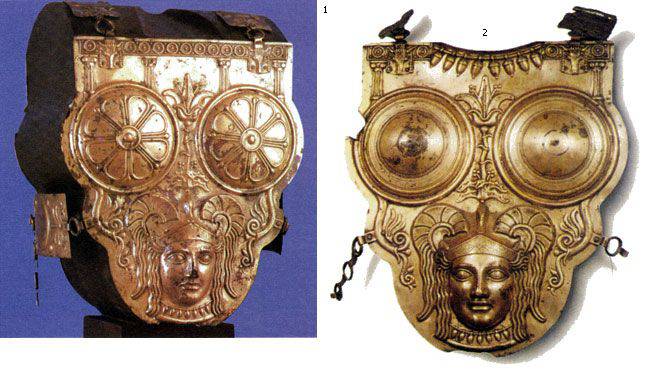 Samnite shell from the tomb of Ksur-es-Sad. Bardo Museum, Tunisia.

Next comes the shell of a completely unusual shape - in the form of a triangle composed of three discs. In total, archaeologists have found 15 of such shells, which indicates their distribution. The shell consisted of two plates: the front and the back, with the belt was not connected in any way, and on the body it was fastened with the help of curved bronze plates. That is, such armor set aside open quite significant areas of the body and this is where the main question arises - why? After all, the armor must protect the warrior so that he is not distracted by parrying the opponent's strikes at his unprotected places, but trying to kill him first. The full Greek invulnerability for the torso could be given (and gave!) By the traditional Greek muscular shell, and such shells reached us, but only they are much smaller than the “three-disk” ones. And there is still no answer to this: where does this form come from, and why is it better than others?

The next type of shell, known for its frescoes and finds, is also quite original. These are square plates with rounded edges for the chest and back with “anatomical embossing” depicting the muscles of the chest, abdomen and back. But ... these shells themselves are small, their length does not exceed 30 cm, so the pattern of the muscles with the muscles proper does not even closely match. That is, we are nothing more than a symbolic copy of the full anatomical shell, which, of course, is very interesting. These plates were fixed on the warrior’s body in the same way as the “three-disk shells” - that is, with the help of bronze plates about 12 cm wide, which had fasteners on rings and hooks. They did not use samnites and scaly shells, although they became known to the same Romans, most likely, simultaneously with chain mail. 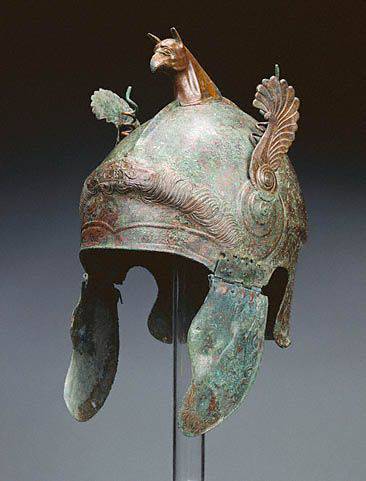 The helmet is clearly of Samnite origin 350 - 200's. BC. Paul Getty Museum, California.

What else the Samnites decided to differ from all the others (and how else to say otherwise?) Is the decoration of helmets. Actually, they are all recognized by the characteristic holders for feathers. By itself, the helmet is quite ordinary - it is a Halkid helmet without a spatter and with hinged shoulder pads. They adopted it from the Greeks, this is understandable, but they added to it two tubes to the left and right of the ridge or the place where it was located with the Greeks. Often the helmet was decorated with tin wings on the sides and then the tubes for feathers hid behind them. That is, if the Greeks had only one comb on the helmet and that was all, then the Etruscans should have two more feathers on the exact same helmet. Sometimes there were five tubes, and they were located across the helmet. They also used Montefortin type helmets, but later. 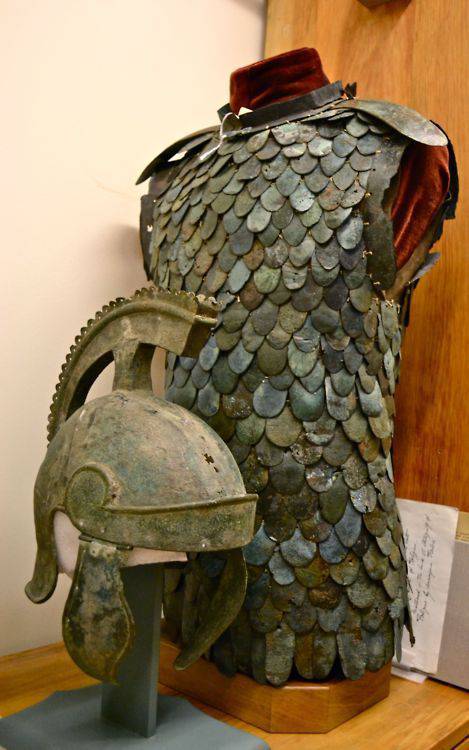 Judging by the images on the frescoes, the Samnites had good cavalry and many horsemen. Peter Connolly even claims that they had the best cavalry among the Italic peoples. In this case, the horses in the frescoes, we see the bronze bibs and shoulders, that is, their horses were at least somehow protected. These details of horse equipment were found by archaeologists and they are exactly the same as in the pictures. Interestingly, the riders are armed just like the infantry, that is, there is no difference between them. 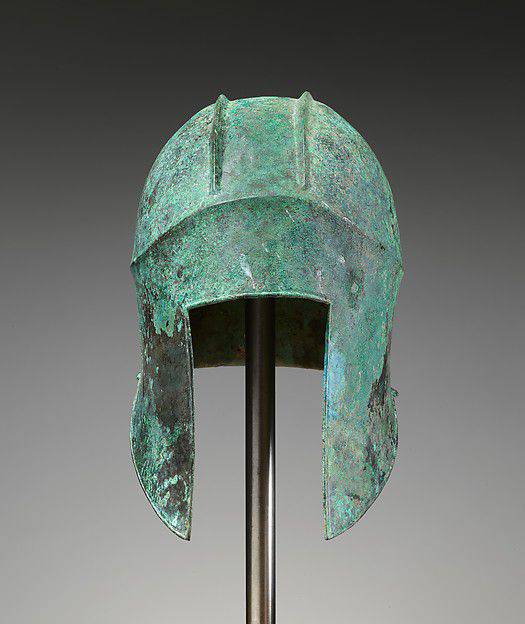 It is known that between Rome and Samney there were three wars in the period from 326 to 291 BC. e., and in one of the battles the Samnites did not just win, but managed to capture a significant part of the Roman army and forced all the prisoners to pass under the yoke - “the gates of three copies connected by the letter P, which was a terrible disgrace according to the concepts of that time. But in the end, the Romans still defeated the Samnites, retaining, however, as a reminder of their military prowess, the Samnite gladiators. The equipping of the Samnite gladiators was a large traditional rectangular shield-scutum, a helmet decorated with feathers, a short sword, and perhaps a chased leash (a tribute to history!) On his left foot.

Ctrl Enter
Noticed oshЫbku Highlight text and press. Ctrl + Enter
We are
White armor and colored armor ... (part two)“White” and “colored” armor ... (part one)
93 comments
Information
Dear reader, to leave comments on the publication, you must to register.