Slaughter something prettier (part of 2)

Arapov is a long line ...
(“Ruslan and Lyudmila” by AS Pushkin)

The interest shown by readers in the material about cold weapons The East is quite understandable - it’s very beautiful, but at the same time deadly, in spite of all its beauty. It is a little surprising, however, that all these wonders are in the funds of the Metropolitan Museum in the United States, but there is nothing to be done. Remember Wilkie Collins’s novel “Moonstone” ... After all, it adorned the hilt of a dagger of a certain Muslim lord, although it was originally on the forehead of the Hindu god of the moon. That is, it was possible to plunder the temple of one god and use his wealth to decorate ... a knife! Well, and then the British looted the treasures of this Muslim ruler and away we go. Then they sold the mined, then ... resold. So, as a result, through purchase and donation - yes, many beautiful products in the collections of this museum are a gift - the Metropolitan Museum just got its treasures. Today, his collections have thousands of storage units, and all these are mostly unique antiquities and examples of the craftsmanship of ancient artisans.

Well, today we will continue our acquaintance with samples of daggers from his funds, and daggers with a curved blade will be taken as a basis. The fact is that the traditional public opinion in Russia in Russia since the time of A.S. Pushkin is like this: once the East, then the dagger of the curve, and the saber are necessarily a curve, and the sword ... also ... a "curve." However, in reality everything was completely different! It is wrong to think that only European two-handed swords, as well as swords with a wavy blade, had a serrated blade. No, they were also in the Turkish Shemshir sabers, and in the Indian daggers!

At the time of Vladimir, the Red Sun (and, accordingly, Ruslan and Lyudmila) “Araps”, that is, Arabs did not use any sabers - it was exclusively the weapon of the Turks - the steppe nomads from Central Asia and it was only just penetrating Europe! The Araps fought with straight swords, although not the same as in Europe. Their daggers were also with straight blades to pierce the chain mail of the defeated enemies on the ground, but the sabers appeared and spread to the East much later.

Truly amazing love of Indian blacksmiths gunsmiths to the guard with a shackle. They even supplied maces, not to mention swords and sabers. But they got them and daggers! For example, the Indian dagger chilanum is traditionally an Indian dagger, spread from Punjab and Nepal to southern India, in the 17th century. 27 length cm; blade length 19,1 cm; Weight 229,6 Metropolitan Museum, New York.

The eastern blades differed not only in weight, decoration, shape of the cross, but the instructions on the technique of sword combat in the East were their own. For example, Arab warriors were advised to first strike the enemy’s sword with a sword so as to cut off his ... index finger! But what does this mean? That he lay with them on the crosshairs. This means that the blade itself was already narrower than that of the European one, and the sword itself was more maneuverable! Then, when the enemy had to drop the sword, it was necessary to contrive and cut off his head with a second blow!

That is, we note that among all the other methods of possession of the sword, the first place among the Arabs was felling, and not an injection! The famous Arab warrior and writer of the XII century., Participant of many battles with the crusaders of Osama ibn Munkyz, in his autobiographical chronicle “The Book of Edification” told about an interesting event that happened to him in his youth when he returned from a trip to the Sheyzar castle. He was unexpectedly attacked by an assassin - a member of the Hashiyeed murderer’s sect, armed with a dagger: a small nick. The blacksmith in my town said that he could remove it, but I told him to leave everything as it is, since this is the very best brand for my sword. And this mark has been preserved to this day. ” That is, Osama ibn Munkyz, sitting astride a horse, with one blow he cut the dagger blade (naturally, the blade fell on the blade, not across the blade) and ... the hand holding it!

At that time, craftsmen often bought weapon parts from each other. Someone made blades, someone handles ...

The well-known English historian D. Nicole notes in a number of his works that Arab, Persian, Turkish, and Indian blacksmiths produced swords of very high quality, and, yes, indeed, lighter than European ones. The blade of the Galaia sword, for example, was about 5 centimeters wide and from 90 to 115 centimeters long, and the wider salmani, respectively 7-8 and 90 centimeters. The saber from Nishapur of the IX - XI centuries that reached us the width of the blade is 3,5 centimeter, and the length of 71,5 is centimeter and it is almost straight. In his opinion, the later eastern blades had similar parameters, although their curvature gradually began to grow.

Indian dagger khanjar (khanjarli), XVII - XVIII centuries. Could not have guards. Steel, ivory, gold, rubies. 29,2 length cm; 266,5 weight. Now imagine that the handle of this weapon is clamped in your hand and you have to wield them ... Metropolitan Museum, New York.

Albanian Jambia XVIII. Pay attention to the characteristic edge of this type of dagger in the middle of the blade and double-edged sharpening. Of course, in the capable hands it was a terrible weapon. Steel, wood, gold, bronze, copper, corals. 46,7 length cm; blade length 42,5 cm; 425,2 weight g .; 277,8 scabbard weight Metropolitan Museum, New York.

But here the dagger ... with time, he, like the gun today, became more and more status weapons, hence the pronounced tendency to decorate them, sometimes bordering on bad taste. It is also known that military affairs do not tolerate inconvenience, but how then can we explain the presence of blades in unthinkable inconvenient handles? That is, what was more important in some cases? Blade or hilt? Of course, a handle that responded to a certain style and tradition, but then what kind of weapon was it?

In addition, the shape of the curved blade in the short-bladed weapon itself raises a lot of questions. Take a sword or a saber in your hand and wave it ... A saber, especially with a yelman at the end of the blade, will guide your hand itself, whereas with a sword, especially of the 15th century. with sharply tapering to the edge of the blade "we must work." The hand, on the other hand, easily makes a movement in a circle, and in exactly the same way also a saber, a continuation of the hand, easily inflicts a strong secant strike. But try to take in hand "curve dagger" and "slaughter" their usual dummy. Dagger with a straight blade - any number! Arranged flat blade horizontally to easily entered between the ribs and ... go ahead! It will be even easier with the stylet, but where and how to stick the curve of the blade? Yes, even when the enemy resists you. That is, there will be a need for a certain practice, skill, and the more the dagger is not “crooked”, the more difficult it will be to do it, although putting a dangerous cut wound with one stroke of work will not make much difference! 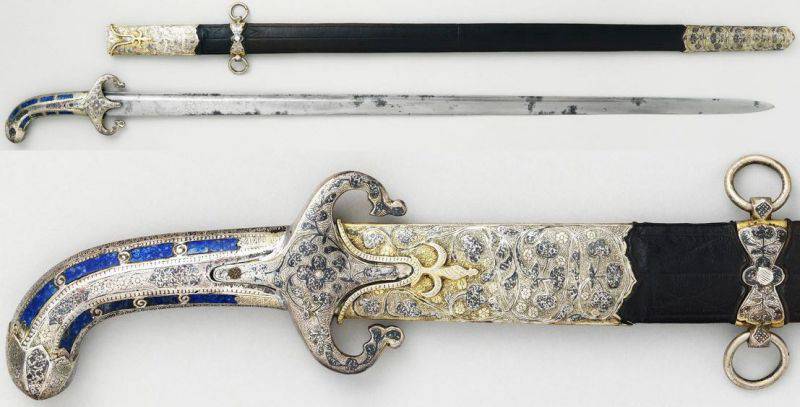 That is, such daggers were likely to have a largely symbolic meaning. They say that this weapon is dangerous, but ... by and large, not too deadly (if you don’t attack, of course, from behind from the back, in order to immediately cut an enemy’s throat!). But since I have it, it means that I am notable, rich, armed and have the appropriate skills to use it - look at me! It turns out that it was a kind of passport of an oriental person. We put on our passports of an expensive Arab leather dust jacket. What for? Just so that the cover is not worn out? H-ee! Show - "and I have." Here are just a passport you will not kill anyone, and then both pleasant and useful - and all in your belt!

It is interesting, however, that even the Turks are recognized masters of twisted blades, both sabers and daggers, and they made and used straight blades. Moreover, in the sheath of such swords, they very often placed a throwing dart. At the same time, it was necessary to remove one part of the crosshair, but the person acquired the ability to suddenly snatch a dart from the sheath of the sword and ... suddenly throw at the enemy! Well, if he did it with his left hand, and, for sure, such masters were there, then the enemy had to be tight, he didn’t expect it! It is clear that a straight dart could not be hidden in a sheath with a curved blade!

Indian cutar with ... curved blade of the XVIII century The weight of 351,5. Why should a curved blade be turned on a dagger, albeit of a slight curvature? Metropolitan Museum, New York.

So no wonder they say that "the East is a delicate matter." There is a lot of what seems to be in plain sight, in fact there is something completely different.