January 15 2016
127
Even those people who are very far from the army and military service and have no relation to it are well known for the ritual of military greeting. Speaking in the language of encyclopedias, military greeting is the greeting of military personnel or formations of the Armed Forces of different countries, established in accordance with the governing documents. Military greetings refer to military rituals, traditions, or military etiquette. Earlier, the military salute was also called salute, saluting, salute, it can also be designated by the word "trump." In this case, the hypotheses of the occurrence of this army ritual there is a sufficient amount.


According to one version, the military greeting came to us from the Middle Ages, being a knightly tradition. Meeting with each other, the knights lifted the visor of their helmets with a flick of a hand to show that a friend’s face was hidden under it (this version does not take into account the fact that all knights had their coats of arms on shields, clothes, flags, this was enough to a friend managed to identify a friend). According to another version, raising the visor of the helmet, they demonstrated their peaceful intent. This was done with the right hand in order to show that the knight is not yet ready to start the battle and does not have aggressive intentions. Such a gesture seemed to say that "in my right hand now there is no weapons". At the same time, among the peoples who were deprived of heavily armed cavalry (the Mongols, the Indians who inhabited North America), the salute was a simple demonstration of the open right hand. The era of chivalry also includes the most romantic version of the appearance of the military greeting. With such a gesture, the knight at the tournament covered his eyes, defending himself against the dazzling beauty of the beautiful lady's heart, who was watching his performance. 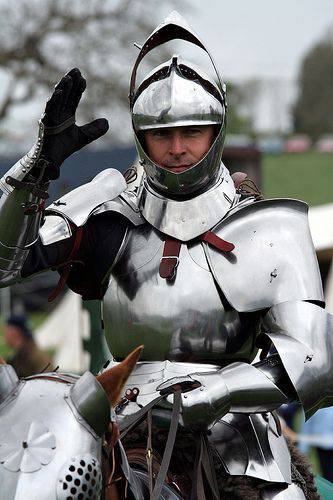 But, most likely, the military salute in the form in which it is known to us today, appeared in the UK. The version that such a greeting arose on the British Isles in the 18th century is documented by military regulations. In those years, in many armies of the world, junior military officials, greeting their elders in rank, took off their hats or other headgear. So it was in the UK, but over time the headgear, especially in the elite divisions, became very cumbersome, so the greeting came down to the usual raising of the hand to the headdress and touching the visor. The well-known greeting to all of us first took shape in 1745 year in the regiment of the coldstream guardsmen - an elite unit of the personal protection of the Queen of England. At the same time, military ammunition was constantly changing, and the gesture was slightly transformed.

Over time, even the very touch of the headdress disappeared. According to one of the versions, the replacement of a headdress removal with a simple presentation of a hand to them can be associated not only with heavy and bulky headgear, but also with the wide distribution of firearms. The first samples of small arms were difficult to call perfect. The hands of the soldiers were almost always soiled with soot, as they needed to set fire to the oppression of the muskets, soiled their hands and when reloading small arms. Thus, dirty hands in soot could cause damage to the headgear when trying to remove it for greeting. 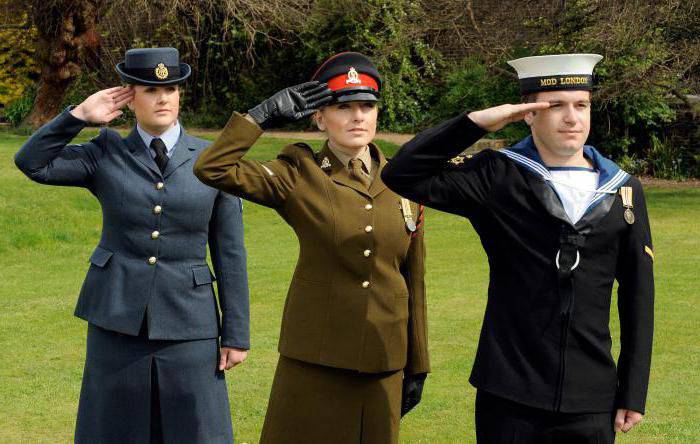 Military greetings in the UK

At the same time, in a military salutation of any army in the world they do not lower their eyes or bow their heads, which speaks of mutual honor, regardless of rank, rank or rank. There is also no question what kind of hand they salute in the army. Always right. At the same time, the gesture itself and the turn of the palm may vary slightly in different countries of the world. For example, since the XNUMXth century, in the British army, a hand raised to the right eyebrow was turned outward with the palm of the hand. Such a greeting is preserved in the army and the air force, at the same time in the royal navy since the time of sailing ships, when the hands of sailors were dirty with tar and tar, and showing dirty palms was unworthy, during a military greeting, the palm was turned down. Exactly the same greeting was received in France. In the American army, a greeting could be taken from the English naval fleet. At the same time, in the United States during a military greeting, the palm is turned down, and the hand, which is extended slightly forward, is as if covering the eyes from the sun. In the Italian army, the palm is carried out above the visor in front.

For many, it can be a revelation to the fact that soldiers and officers in the German army at the time of the Second World War did not at all zigzagovli right and left, as can often be seen in feature films. In parts of the Wehrmacht, for almost the entire war, a standard military salute was adopted with the right hand placed at the head, which was prescribed in the statute. The introduction of a party or Nazi greeting in the Wehrmacht took place only on July 24, 1944, immediately after the unsuccessful attempt on Adolf Hitler, which was organized by the officers. 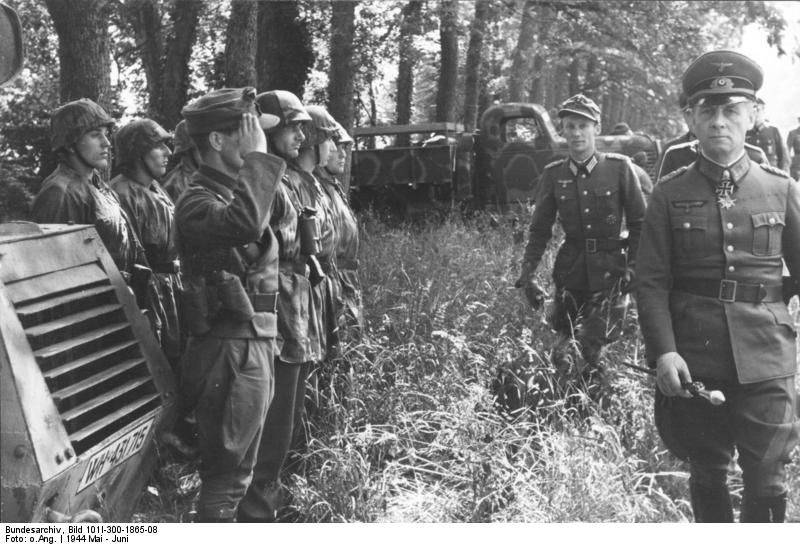 In the Russian Empire, up to 1856, the military salutation was not performed with the whole palm, but only with the index and middle finger. To this day, such a greeting has been preserved in the Polish armed forces. Since 1856, after the end of the Crimean War, in the army of Tsarist Russia, and then the Soviet Army and the modern Russian army, the military salute is given with the whole palm. At the same time, the middle finger looks at the temple, slightly touching the cap of the uniform cap. From here, by the way, there are synonyms for the return of military honor or military salutation - to take the visor, to greet, etc. 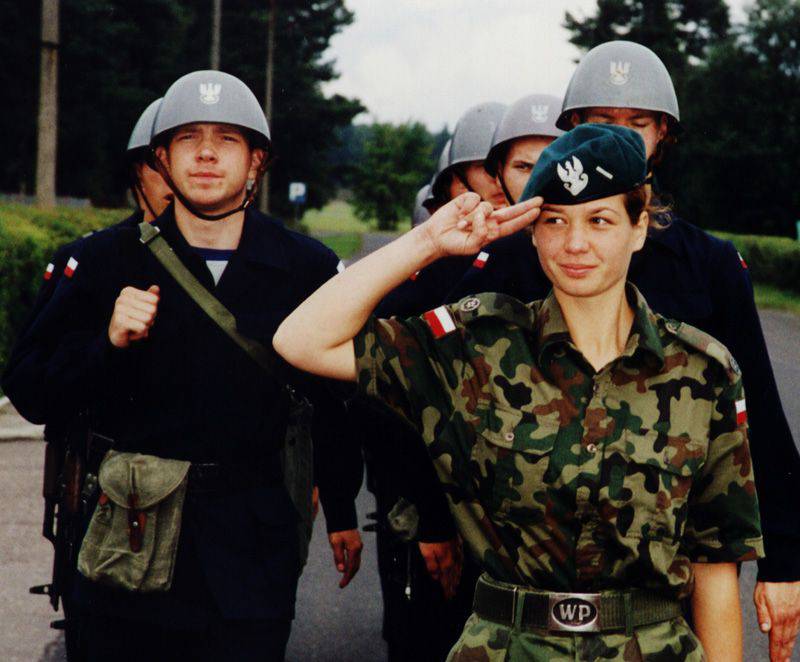 When moving in formation, the military salute is as follows: the guide puts his hand to the headdress, and the line presses his hands at the seams. Together, they move to the drill and turn their heads as they pass by the commanding staff. When passing to meet units or other servicemen, it suffices that the military salute fulfill the guide. At the same time, in the Russian army, at a meeting, the junior in rank must be the first to greet the senior in rank, and the senior in rank may perceive the failure to comply with the military greeting during the meeting as an insult. In the absence of a headdress on a serviceman, the greeting is performed by turning the head and taking the combat position (the body is straightened, hands at the seams).

But by no means in all countries the military salutation of senior officers is the duty of a military man. For example, in modern units of the Israel Defense Forces, the procedure of giving honor at the sight of a senior officer is mandatory only during the course of a young fighter. In all other cases, military greeting is not an obligation, but is the right of a soldier. In parallel with this, the prisoners of the Israeli military prisons (an analogue of the national guardhouse) are deprived of this right at all. 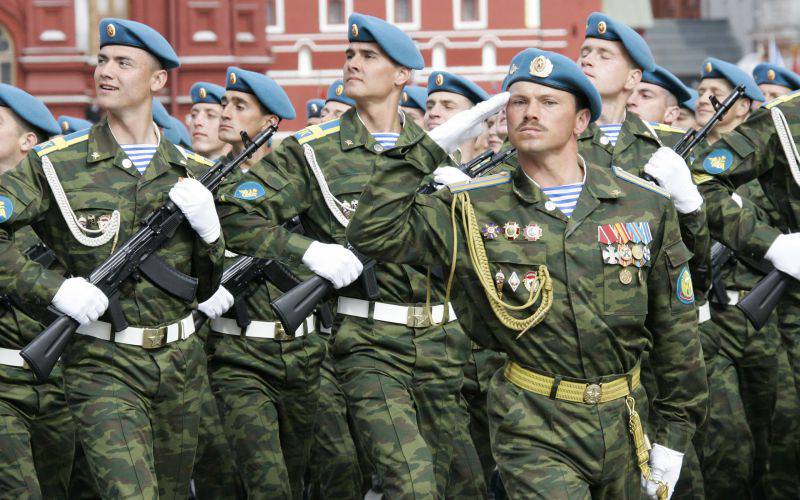 In all countries, the military salute is given exclusively by the right hand. The question of which state is given the honor with his left hand usually arises when high-ranking government officials, due to inexperience or oversight, violate the rules of military salutation, which are either an unshakable tradition or fixed by charters. A serious difference in the military salute is not the hand that is given the honor, but only the presence or, on the contrary, the absence of a headdress on a soldier during this military ritual.

The well-known expression “they don’t put a hand on an empty head” in Russia is usually remembered in the same context as the tradition of military greeting in the United States. In the US Army, the presence of a headdress on a military man when putting a hand to his head is not mandatory. Historians justify this difference as follows. During the civil war of the North and the South (1861-1865 years), the northerners won. Historyas you know, the winners write, which form these or other traditions. Unlike the army of the southerners, the army of the Union, which won the war, was formed mainly of volunteers. Many of these volunteers, especially at the beginning of the war, were dressed in civilian clothes. From this we can conclude that sometimes the caps of the rank and file of the army of northerners were not at all - hence the tradition of military greeting, regardless of whether the headdress is on the soldier or not. 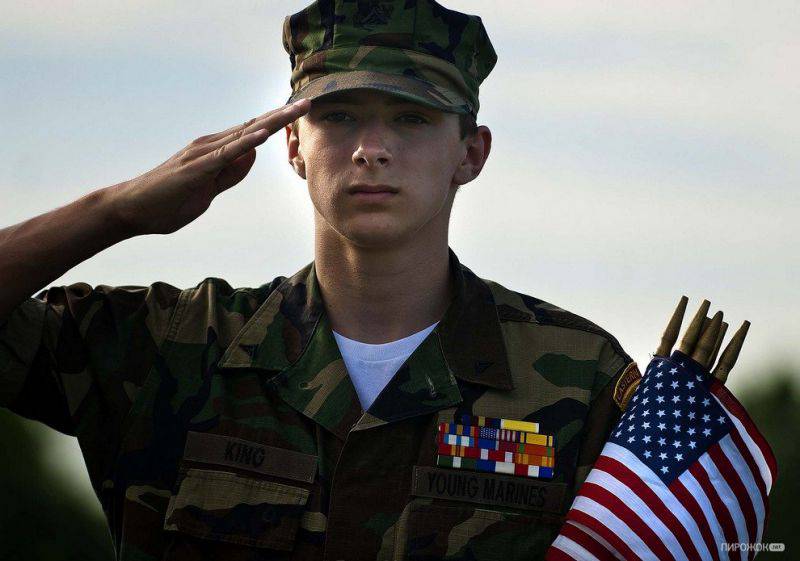 Military greeting in the USA

At the same time, the military salute, which looks organic in peacetime, fades into the background or even further. In many conflicts of the 20th century, statutory conventions and military subordination posed a danger to the lives of their elders. In mass culture, this is well reflected in the American films “Saving Private Ryan” and “Forrest Gump”, in which there are episodes when soldiers are being dragged from more experienced comrades for giving a military salute to their commanders. During hostilities, it helps the enemy's gunners and snipers to determine their priority goal.