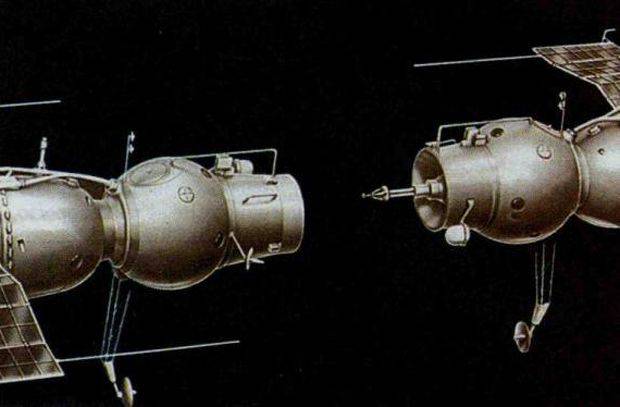 16 January 1969, the Soviet cosmonauts conducted the world's first docking of manned spacecraft in earth orbit
After the first manned space flight, carried out in the USSR 12 on April 1961, space programs in the Soviet Union and in the United States began to develop at an enormous pace. The number of annual manned flights grew, but at the same time the danger lurking astronauts grew. One of the most serious was the risk of permanently remaining in orbit due to the failure of control systems or to be plugged in a faulty spacecraft.

The only way to provide assistance to an astronaut who has fallen into such a catastrophic situation was the development and implementation of spacecraft docking systems in near-earth orbit. It was also needed in order to move from the first stage of space exploration — long flights of single ships with a limited life-support resource — to long-term work at orbital stations.

The first step in testing the docking systems in real space conditions was 30 October 1967 in the USSR. On this day, unmanned spacecraft Cosmos-186 and Cosmos-188 docked in orbit in automatic mode. In fact, they were two ships of the Soyuz series, but uninhabited. The next step was to become a manned docking, but it fell through due to a malfunction. At the Soyuz-23 spacecraft, which launched 1967 on April 1, which was controlled by cosmonaut Vladimir Komarov, one of the solar panels did not open, and the flight was decided to be interrupted. As a result, it completely ended in tragedy: April 24 during the descent did not open the main parachute of the descent vehicle, and Colonel Komarov was killed.

The second attempt of manned docking, undertaken on October 26 1968 of the year, ended in failure. The cosmonaut Georgy Beregovoy on the Soyuz-3 spacecraft was supposed to dock with the unmanned unmanned alliance 2 that was flying in automatic mode. However, he could not do this: when approaching the docking, he made a mistake in the orientation of his ship on a roll, turning it practically "upside down", and could not dock the ships.

After only two and a half months, the third docking operation ended in success. This time it was decided that both ships would be piloted: this allowed to avoid such mistakes as that of the Soyuz-3 commander. It is probably for this reason that the cosmonauts Vladimir Shatalov and Boris Volynov became the understudy and reserve of the Beregovoi commanders of the ships participating in the flight. At the same time, the cosmonaut, who was preparing for the first docking with Komarov, entered the crew of the latter: in 1967, Alexey Yeliseyev was supposed to fly aboard the Soyuz-2 in the year. The third member of the Volynov crew was cosmonaut Yevgeny Khrunov. 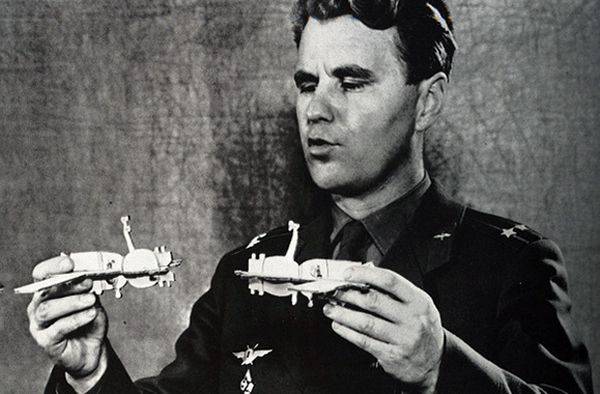 Vladimir Shatalov shows mock-up stages of the Soyuz-4 and Soyuz-5 docking. Photo: chaltlib.ru
The spacecraft met in orbit around eight in the morning on January 16. Up to the distance of 100 meters between them they were led by automatics, and the commanders, Volynov and Shatalov, completed the docking. It was Shatalov, when the ships docked, could not resist a cry of delight: "There is a handshake!"

After the "Unions" docked, it was time to accomplish the second main mission of the flight: working out the transfer of astronauts from ship to ship through open space. At Eliseev and Khrunov, with whom Volynov helped put on the spacesuits and left in the orbital compartment, behind a manned manhole, the transition took 37 minutes. During this time, both came out of Soyuz-5, going over the handrail (it was impossible to step on the trim covered with sensors), got to Soyuz-4 and entered its orbital compartment, where they were sealed after pressure sealing and equalization Shatalov. By the way, the last minutes before the cosmonauts came out, the Soyuz-5 commander hesitated whether to give them a go-ahead for exit: the medical telemetry of both showed that their excitement was too high for pressure and pulse, but this quickly passed.

The transition process from one docked ship to another was watched live by thousands of Soviet television viewers: it was broadcast on the central channel. But the docking in the USSR could not be seen: the ships made it over South America, from where the signal passed badly. And all the viewers could watch how Khrunov, barely leaving the hatch, suddenly stopped and stopped moving. It turned out that the cosmonaut did not have a ventilation and cooling system, and it took a few minutes to figure out: the cause of the malfunction was just the toggle switch that was not turned on.

In the docked state, the ships spent four and a half hours in orbit, after which they “parted”. The crew members of the Five, who had switched to Soyuz-4, went back to Earth on this ship, and their commander piloted the returning Soyuz-5 alone. And almost died. At first, the compartment separation system did not work, and the descent module entered the atmosphere with a “trailer” that threatened to destroy it. But in the end, overload while decreasing worked as a failed pyrosystem, tearing off the extra compartments. Instead, he was late with the opening of the main parachute, in which, when he did open, the lines were also messed up. As a result, Boris Volynov made a very hard landing, which cost him the broken roots of the upper teeth and withdrew from the cosmonaut corps for five years: he returned to flying only in 1976 year.

Ctrl Enter
Noticed oshЫbku Highlight text and press. Ctrl + Enter
We are
Cosmos: the first bloodToday 79 would be the first man who flew into space - Yuri Alekseevich Gagarin
Military Reviewin Yandex News
Military Reviewin Google News
12 comments
Information
Dear reader, to leave comments on the publication, you must to register.