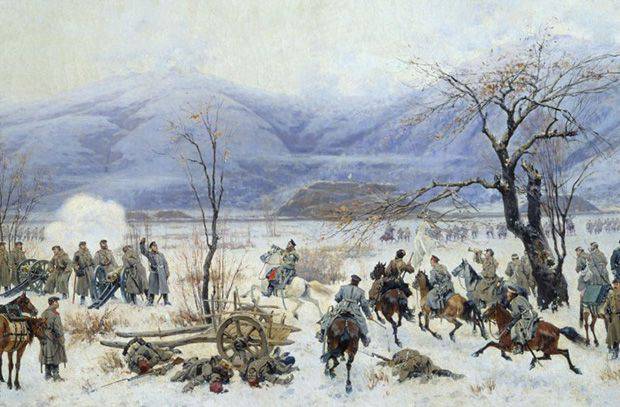 January 15 The battle of Plovdiv began on January 1878, which became the victorious finale of the next Russian-Turkish war.
At the beginning of 1878, the Russo-Turkish war was approaching the final. Behind were the crossing with the battles across the Danube, the heroic defense of the Shipka Pass and the months-long siege of Pleven.

In the last days of December 1877, Russian troops crossed the snow-covered Balkan Mountains. General Joseph Gurko, one of the most decisive and successful commanders of that war, commanded the strike force — over 70, thousands of bayonets and sabers.

Turks sincerely believed that in the midst of winter, the snow trails on mountain passes would be impassable. For six days the soldiers of Gurko fought not with the enemy, but with nature and the landscape, breaking through the passed passes frozen and blown by the mountain winds. Guards Preobrazhensky and Semenovsky regiments along with the Caucasian Cossack brigade were in the forefront.

The frost was such that the soldiers' boots had to wear another shoe - hastily made “galoshes” of buffalo hides with fur inside. Often guns, other loads and even horses carried on their hands. We slept right in the snow, wrapped in felt. At one of these nights at the feet of Gurkoe asleep, without noticing him under the snow, one of the soldiers sat down. The tired general did not even wake up. When one of his orderly men said that the private soldier was sitting on the general, the soldier did not believe for a long time ...

4 January 1878, the Russians, finally descending from the Balkan slope, occupied Sofia, the capital of the future independent Bulgaria. The Turks, who did not expect the appearance of the Russians, fled, with almost no resistance. Geurk Pasha, as they called General Gurko, the Ottomans knew well - at the mercy of the Russians they threw not only a part of the cannons, but also hospitals with the wounded.

At the gates of Sofia, Russian liberators were met by crowds of people led by Orthodox clergy. General Gurko’s speech to the inhabitants was short: “God will help us to free the Russian by force weapons and the rest of Bulgaria! ”

The Turks, who did not expect a breakthrough, retreated from all the passes of the Balkan Mountains, so that, having gathered together at Adrianople (now the city of Edirne), reliably cover the capital, Istanbul. Gurko made a decision: do not let the enemy gather all the forces together, intercepting part of the retreating from the ancient city of Philippopol (now Bulgarian Plovdiv).

At the approaches to it, Gurko's soldiers overtook and attacked the 50-thousandth Turkish army. The battle began on 8 in the morning of January 3 (January 15 in a new style) 1878 of the year. The Turks, realizing that the fate of the war was being decided here, fought hard. The Russians had to attack the Turkish field fortifications, fording the Maritsa River, fording the pieces of ice under the enemy fire.

On the night of January 4 (16), in Plovdiv (Philippopol), invisible to the Turks, several squadrons of Russian lancers broke through, seizing the building of the city station, where a magnificent dinner was prepared for Commander-in-Chief Suleiman Pasha and his staff. By morning, the whole city was already in the hands of the Russians, but the stubborn fighting in the vicinity continued for another day.

Almost 30 of thousands of retreating Turks were cut off from the road to Istanbul and tried to fight their way to their own. The “Arabs” fought especially hard, as the Russian soldiers called the regiments of the Ottoman army formed in Egypt. The “Arabs” were well trained and armed with the most modern weapons — multiply-charged American rifles, whereas the Russians had single-shot rifles.

However, despite stubborn resistance and the latest weapons, Turkish troops were defeated. According to the results of three days of fighting near Plovdiv, which began on 15 in January of 1878, the enemy suffered heavy losses - 20 thousands of dead and wounded. All Turkish artillery, 114 guns, went to the Russian.

The idea of ​​the Turkish command to create a new strong line of defense on the approaches to Istanbul was destroyed, and the fate of the Russian-Turkish war was solved.