To the day of the internationalist warrior

February 15 2016
22
The Afghan war began for me in the front-line Chirchik. The famous training in the shortest possible time squeezed out of our spring call the entire civil sauce. As a simple, but perfect machine, she shook out all unnecessary, equalizing everyone, smart and stupid, strong and weak, educated and dense. 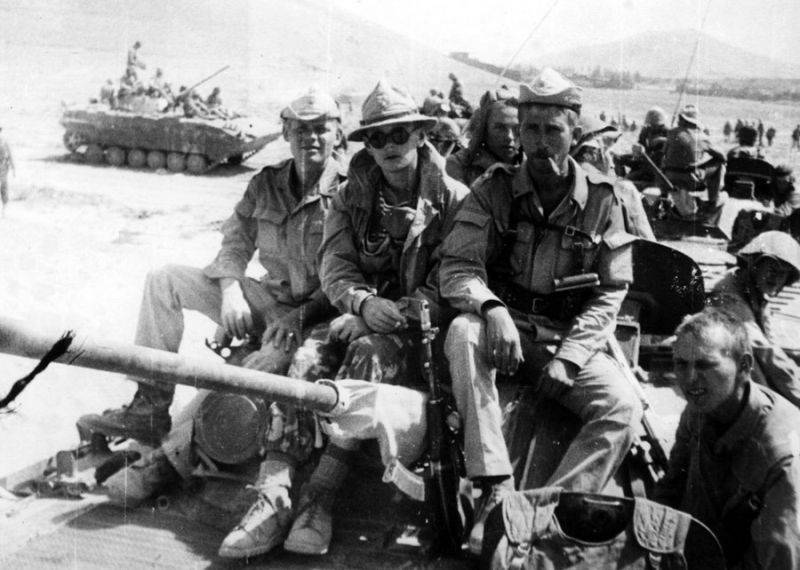 A study book is a unique place where you understand that it is not the strongest, not the fastest and not the smartest. And the "equestrian" lessons drove into the head the confidence that the paratrooper is an eagle for only three minutes, and everything else is a horse. With what gratitude, then he recalled our night run with a box of sand on the hump! For in war, your advantage over death is the ability to run fast. Fast and long. And uphill. And as soon as you get tired and sit down, she will immediately sit down next to you, hug you and have something to talk about.

Extreme physical exertion did an amazing job, the person became extrapractical. Fulfilling only the norm, no more, using any opportunity for rest and sleep. We must meet the time on the march, believe me, not a minute earlier, it is necessary to do a standard exercise on the shells, not one more. The desire to be the first and the best is completely out of order. And at night, the war in Afghanistan came in terrible stories of junior commanders. Imagination agitated, but any questions ended with the Kandahar bridge. After a year of service, I began to understand the sergeants of our equestrian company, the report on the shipment over the river remained in the office, and the guys simply burned with envy to these salagoons, whom they drove into the tail and mane, where they would hardly go. After all, each has its own task.

No matter how it was, but the joy that I felt when flying to Kabul was immense. We flew abroad. Not to war. And they did not want to understand, and knew nothing. Did we perform some kind of international debt? Given the ability to sleep with open eyes in the classroom on political information, no one will say that there is not. Another thing is more important: who did these children become when they were not even twenty years old, many of whom even shaved every three days. Every day made them soldiers. In some philosophical, mystical sense, imparting some knowledge, which then, in the civilian world, unmistakably allowed to determine "their" by sight. Of course, the Afghan experience is much broader and differs than the experience of a single DSB, but it is from such streams of awareness that the sea of ​​the personality of the Afghan war consists. Especially if this trickle of ice falls from the highest peaks.

Yes, I was lucky, I was lucky to be in the very rapids of the Afghan events, in "caravan" fighting. That is, there was enough material with an instrument. Soldier's luck allowed not to become the very "material" in this invoice. I was lucky while my immediate commander was responsible for me, and stopped driving when I was entrusted with responsibility for eighteen people. Immersion in the underworld would probably be a more comfortable act. Already returning to the mainland, he looked with horror at a group of young flyers with a thin mustache, excited by their mission. Realistically, they were to command platoons. In war, all the soldiers, but the commander - is a martyr, if he is a real commander. And the more personnel are in his charge, the worse his third shot of vodka will be. Omitting, of course, those people who have a soul of two pennies in one Soviet phone call, which does not fit any conscience or shame.

Whoever speaks of the “Afghan syndrome”, or the troubles of the war veterans, but in reality service in the DRA has become a real springboard for many. I am sure that a bitter drunkard, telling stories about the "red tulips" under the stall, with anguishness, would have become such, having served as a clerk in the construction battalion. War does not break, war hardens. Strong makes even stronger, and weak, weak always. And in all. It will not change neither war nor a lottery win. It does not weaken and does not strengthen, weakness - the constant is constant. VUS in my military ticket opened almost all the doors in the USSR. Personal connections even interfered with this, for they made it difficult to make the right choice. Only the “Kips operator” helped me, which the command imposed on me to shuffle a little over the mountains, but with wise advice. What we remember to this day, once every two or three years, forcing him to drink vodka, when in February, and when in August.

Afghanistan confirmed the amazing feature of the Russian, Soviet people, the brotherhood of veterans. For the first time since the Great Patriotic War, the military fraternity brought the soldiers to the dates of the calendar. In the form and without, on whose chests their whole book of life was written, the most important thing that the Most High gave them. For awards, distinctive signs, badges, you can explore the geography of the globe. Each of these soldiers can become the hero of the book of any military writer. Everyone has their own unique историяwhich once seemed to him, and maybe now, ordinary, ordinary. The path of war, such work. Sacred work, for you are on it every day, and even an hour, or even a minute, you experience your death. Afghanistan-Asia, Vietnam, Africa, Yugoslavia, Moldova, Chechnya and now Ukraine. Ukraine stands alone.

Ukraine stands alone. Not even because friends have already died on it. And from different sides. For a soldier, this is prose, the end of the road. And because in every episode of the battle he saw himself. Twenty-year-old boy, transferred from the mountains of Afghanistan to the Ukrainian steppes. And the comparison is not in my favor. I look into the eyes of the fighters and see what they have experienced in a little over a year, they experience in a few weeks. What can I tell them? To them, the training of which were real fights, and the motivation for the death of loved ones? What else can a soldier with thirty years of experience teach them how to cheat with death? Tell them that I understand them every glance, every word, every movement and every deed? That I feel the same bitterness when they pull out Soviet military tickets from the pockets of defeated enemies? I know that this is all they do not need, because war is a very practical thing. And the culmination of this practicality is victory. Do just a little for the victory, and they will thank you. For the living and for the dead.

It will take some time and on February 15, new faces will appear in the places of gathering. With unprecedented awards on his chest, with new badges, dressed in a motley camouflage. We will drink vodka and remove hats under the third. There will be many conversations about everything, and little about patriotism or other regular speeches. After all, patriotism is as practical as war. There will be joy that survived, survived, but not because the bravest and strongest. And because lucky. In the cities there will be new obelisks, with new names, in which candles will burn and flowers will lie. In the textbooks will appear the new-old names of cities that will sound like the ringing of a bell. The directors will make new films about the war, the writers will write new books, the singers will sing new songs. And we will always remain soldiers.