January 15 2016
398
Today, 15 January ends the so-called "Gaidar Forum", which is considered an intellectual platform for discussing the most important aspects of the Russian economy in the system of the economy of global scale. If we talk about the goals of the forum, held since 2010, and named this year “Russia and the World: A Look into the Future”, then they officially sound as follows:


attraction of leading world scientists and practitioners to a joint discussion of economic and political problems;

reflection of the main trends and key events of the national and global economy and politics;

Russia's consolidation of a solid place on the intellectual economic map of the world and the status of an important center of global economic discussions at the highest level.

The organizers of the discussion platform are the Gaidar Institute for Economic Policy and the Russian Presidential Academy of National Economy and Public Administration (Russian Academy of National Economy and Public Administration under the President of the Russian Federation). The forum’s permanent experts include such people as Federal Minister Mikhail Abyzov, Chairman of the Committee on Economic Policy, Innovative Development and Entrepreneurship of the State Duma of the Russian Federation Anatoly Aksakov, Head of the Federal Antimonopoly Service Igor Artemyev, Chairman of the Committee of the State Duma of the Russian Federation on Labor, Social Policy and Affairs Olga Batalina, veterans, Industry Minister Denis Manturov, Deputy Director of the Institute of World Economy and International Relations, Flax Civil Initiatives Committee Evgeny Gontmakher. The list also includes such well-known personalities as German Gref, Mikhail Delyagin, Andrei Klepach, Gleb Pavlovsky, Leonid Gozman, Alexey Kudrin, Anatoly Chubais and others.

The experts - bright, of course, heads - gathered, drank coffee tanks, ate pretty, economic issues were discussed. Well, what, actually, to be with one of the main points of the list of goals of the “Gaidar Forum”, and specifically with the item “elaboration of strategic proposals and recommendations for the development of the national economy”? What, in fact, have come? ..

At the time of the preparation of the article of the final document, the experts did not give birth, but there appeared statements regarding what will be reflected in this document (if it appears at all). In particular, a number of economic gurus who arrived from abroad (well, those who, like many of our “experts”, including representatives of the supreme power, declared a complete collapse of the world economy with oil prices, first below 80, then below 60, then below 40 dollars per barrel ...) announced that for Russia the oil prices at the level of 100-120 dollars per barrel are literally "damning". So, Harvard University professor Timothy Colton stated literally the following (quote RBC):

You do not need oil at $ 120 to get growth. The crisis will stimulate reform. True, the current government has been in power for many years, and they have not been held before.

Apparently, all Russians need to make one conclusion from this statement by a Western professor: well, that “golden time” has come when the reformist power of representatives of the Russian government finally wakes up. At a price of 100-120, a dollar per barrel, of course, I didn’t really like to scratch and knock on my finger - petrodollars filled the budget with rivers, but at the price of oil in 25-35 they will start, you know, everything will be reformed, they will start! ..

So what do the world economic gurus propose to the Russian government that the economy, as they say, jumped at a gallop. The essence of the proposals was actually reduced to one thesis: to reduce costs. They say that as soon as you (we, Russia) “optimize” your “exorbitant” expenses, as soon as you reconstruct, obviously according to the Gaidar scenario, the economic model, so multi-percentage growth will not take long to wait ... 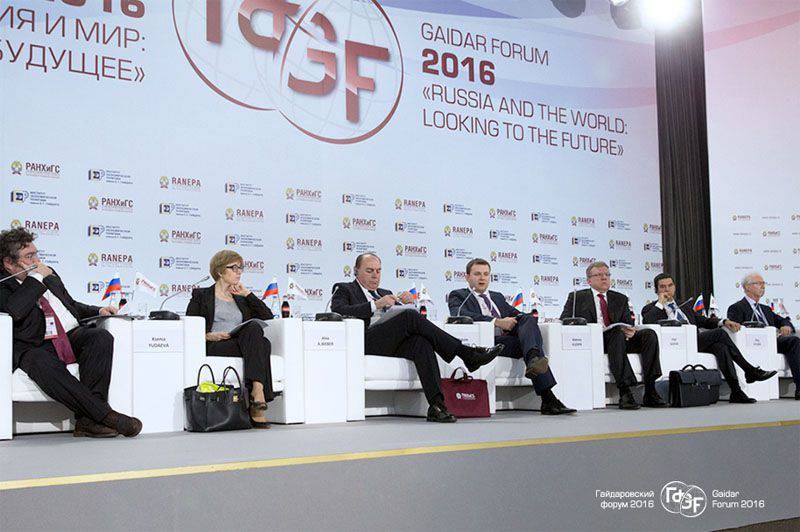 From the speech of Professor University of California Barry Eichengreen:
To reduce budget expenditures - you first need to understand why the budget is built in such a way that it needs to be reduced. For countries with large public debt and significant deficits, spending cuts are inevitable. On the other hand, if the budget deficit is due to temporary difficulties - lowering prices for raw materials - and you are sure that they will grow soon, then you do not need to significantly reduce spending.

To put it mildly, a controversial statement.

First, who told Mr. Eichengrin that Russia has a large public debt? If we are guided by his “postulate”, then with the national debt that, for example, the United States or Japan have, these states should have cut expenses for a long time so that their citizens would have had their last forage found. However, they do not dozhe ... There is enough food.

Secondly, what does the term “if you are sure that they (oil prices) are going to increase, then ...” mean? It seems that this professor Eichengrin is still that level 80 troll, because he hardly seriously believes that the rise in oil prices depends on how Russian economic “experts” predict him and on how deeply the faith of these very specialists in the growth of oil prices.

In general, the fact that the overwhelming majority of economic gurus discussed only two topics attracted attention: how much Russia needs to cut costs, and what could be the price of oil in the near future. By the way, in the Ministry of Finance of the Russian Federation, apparently, they listened to the arguments of American experts, and decided to cut expenses by another 10% ... And, as always, with the wording: no reduction in strategic sectors, of course, will not affect ... Of course ...

It turns out that all professors, major experts in economics and economic affairs gathered at the forum with the goal of stating that even without them it is obvious, as they say, to any housewife: the Russian economy, unfortunately, during all the years of bureaucracy on the inflow of petrodollars has not been reconfigured to the note that minimizes the dependence of the raw material on the filling of the budget. And the same experts offer two alternatives as an alternative: either to rely on the rise in prices for "black gold" or to cut expenses by tightening the belts. If this is economic professionalism and foresight, then on our website alone, a couple or three thousand readers, it is time to assign professorships in the field of macroeconomics. If only because we are precisely able to optimize our own expenses better than any economic guru of the Gaidar Forum, which is used mainly to “optimize” expenses from other people's pockets and is very sensitive to the content of the pockets of our own ...

Ctrl Enter
Noticed oshЫbku Highlight text and press. Ctrl + Enter
We are
The head of the DPR visited Gorlovka, the cadets took the oath, and in the "Olympic" hosted the forum "Donetsk Republic"Engineering Technologies-2012. The first days of the forum
Military Reviewin Yandex News
Military Reviewin Google News
398 comments
Information
Dear reader, to leave comments on the publication, you must to register.