Smartly against the Angels. Bulgarian Prime Minister came up with a "new" formula for a gas pipeline from Russia bypassing Ukraine

January 15 2016
101
A few days ago materials appeared in the Bulgarian newspapers stating that Bulgarian Prime Minister Boyko Borisov announced his readiness to resume discussions on the construction of a gas pipeline with the Russian Federation. It should be recalled that Bulgaria initially concluded an agreement with Russia regarding the construction of the South Stream gas pipeline under the Black Sea, and then, under pressure from Brussels and Washington, decided to withdraw from the agreement, announcing anti-Russian sanctions and that, like, would not be needed. As a result, the pipes, which have already been delivered to Varna and Burgas, have remained to lie on storage sites, for which Russia, by the way, still pays rent to the Bulgarians.


The materials in the Bulgarian newspapers made a lot of noise, especially in Bulgaria itself and in the camp of the “elder brothers” in the European Union. Shortly after the publication of Bulgarian journalists, who cited Boyko Borisov, the situation was presented in the Russian Ministry of Energy. The comment was reduced to the fact that there was no talk about any process of resuming negotiations on the South Stream with Bulgaria, and that the project, at least in the coming years, would not be reanimated. It would seem that there is nothing to discuss, because the Bulgarian newspapers issued a "duck".

However, on the eve of the news agency tapes came a message, somewhat clarifying the words expressed by the Bulgarian Prime Minister. The reports allege that Borisov did not mean the resumption of negotiations on the South Stream. Borisov decided to take a different path, declaring the possibility of negotiations on the implementation of a “new project”, under which Russian gas will flow into Bulgaria bypassing Ukrainian territory.

It should be noted here that Bulgaria is currently the only state in the European Union, which is 100% dependent on the Ukrainian transit of Russian gas to Europe. In other words, any “gas” bashing of Kiev, including the removal of gas from the pipe through which this same gas is pumped from Russia to Europe, primarily hit Bulgaria, since there is simply no “gas” alternative to this state. Here it is worth once again wondering how firmly “official” Brussels is holding tightly to official Sophia for the soft spot that Sophia spat on her own strategic interests.

Apparently, such a problem scratched the soul and the Bulgarian prime minister, who began to more closely monitor the weather forecasts. And these forecasts of the main Bulgarian democrat were clearly not pleased. So, forecasters for the next week predict a serious minus for Sofia. If daytime temperatures are within -4-6 Celsius, then at night the air temperature in the Bulgarian capital will drop to 13 frost.

Under such weather conditions, the Bulgarian government will obviously need larger amounts of energy resources for heat supply than previously thought. And where are these resources to take? Option one is to purchase from Russia. But the “super-reliable” partner in the person of the Ukrainian state stands in the way, and is itself experiencing obvious problems with energy carriers, trying to break the comedy with the refusal to buy Russian gas at a price of 212 dollars per thousand cubic meters.

In such a situation, the Bulgarian prime minister is obviously trying to solve the most complicated equation, in which a variety of parameters must be taken into account: from the still-born South Stream and pressure from the Brussels "brothers" to indignation of ordinary Bulgarians who want to live in heat, and it doesn't matter where the government comes from countries are going to take this heat. Being between two fires, Boyko Borisov is trying to invent something that, in his opinion, should help him find a way out of the situation, while retaining what is called a political person.

Information Agency France-Presse quotes the words of the Prime Minister of Bulgaria to the ministers:

According to Borisov, the Balkansky terminal could receive not only Russian gas, but also gas from Azerbaijan, as well as liquefied gas from the territory of Greece and Romania.

Today on the agenda - gas distribution "Balkan Center". Russia can agree to build an underwater branch of the pipeline (along the bottom of the Black Sea - author's note) with two pipes with an annual capacity of 10 billion cubic meters. m each. And these pipes will fill our gas terminal with the further transportation of fuel through a new gas pipeline to Europe. 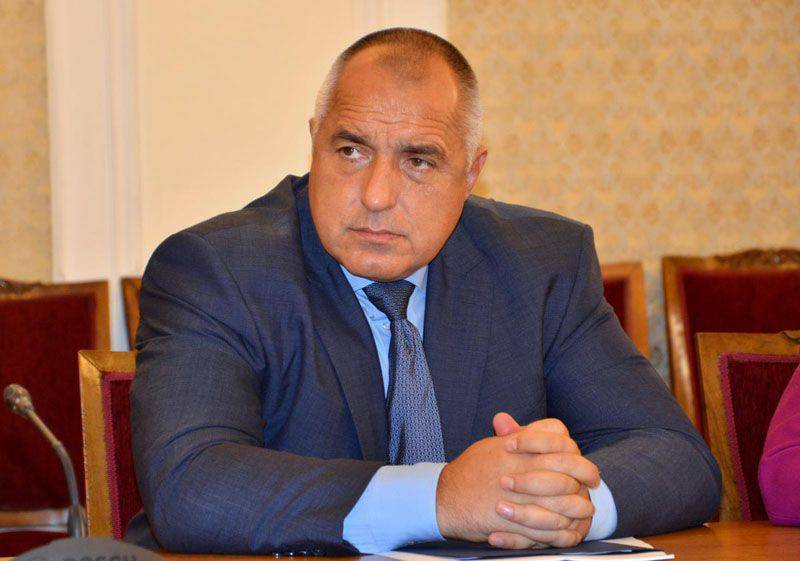 From such statements by the Bulgarian prime minister, it becomes clear that he, trying not to incur the punishment of the European Union and at the same time please the citizens of Bulgaria itself, is simply trying to "rename" the project. Like, if South Stream is impossible, then we’ll come up with a different name, plus slightly “correct” the likely logistics. As a result, the gas will go, as it were, not only from Russia, but also from other countries (even if the Russian volumes will be the most ambitious), and in fact this option may well be arranged by Brussels, which in turn is under pressure from Washington.

In general, the Bulgarian authorities are spinning, as they say, in a frying pan, inventing new formulas so as not to stay, naked and unheated in addition, I'm sorry, backwards ... And after all, the Bulgarian authorities do not want to spin, by definition. After all, if the same Borisov doesn’t help up, then Frau Merkel, publicly supporting the “sizzling” anti-Russian sanctions, will sluggishly push the “Nord Stream-2”, and, what is called, hello, Bulgaria ... Not to mention “hello, Ukraine "...

What will remain the aforementioned Ukraine in the case of the implementation of the new "streams"? It will remain either to be content with a gas reverse from Slovakia, until the Slovaks decide that it is time for them to really make money on the anti-Russian “bykovanie” of Kiev, or to build a mournful physiognomy and still really negotiate with Moscow. After all, the European "partners" of Ukraine, as practice shows with the same "little brothers" from Bulgaria, certainly think about the interests of Ukraine at the very least. Its own shirt, it will be closer to the body ...