“Why are the officials silent?”


“Why are the officials silent about the minimum pension of military pensioners? I am a former junior sergeant of contract service. Total service is 20,9 of the year. My pension is 7 thousand 300 rubles. Similarly, such pensions are received by those who have worked only five or six years in a civilian. The state does not pay us in full, and now at all working pensioners will not be indexed, it turns out that we will be stripped twice ... ”

When summing up the construction of the armed forces in 2015, Sergei Shoigu said that the number of private and non-commissioned officers has for the first time exceeded the number of conscripts (approximately 300 thousand people).

The increase in the number of contract soldiers in the armed forces is due to objective reasons, the main one being the need for a more professional approach to the operation and combat use of sophisticated modern weapons and equipment. The share of new weapons and equipment in the Russian armed forces, according to the Minister of Defense, has already reached 47 percent. By 2020, the task was set to bring this figure to 70 percent. Therefore, the task of providing the armed forces with contractual professionals is very serious: in the near future to increase their number by another 40 percent (to 425 thousand people in the 2017 year).

Is it being done enough today to increase the number of contract soldiers from among the rank and file and sergeant staff? What prevents the process of their fixation in military service for a long time?

A wide list of guaranteed social benefits and significant progress in solving problems with permanent and official housing for military personnel provided an influx of people willing to link their fate with the armed forces. But in recent years, negative tendencies have also emerged that negatively affect the attractiveness of military service and the desire to associate all their lives with the armed forces.

The most important of them are the slow growth of money allowances and military pensions. Not all contract servicemen are satisfied with the salary, which has been rising for the fifth year only. due to internal reserves Ministry of Defense. Salaries for military posts and rank have not been revised from January 1 2012. The indexation of military pensions over the past two years has also significantly lagged behind from the level of official inflation. These factors lower the social status of military personnel, the prestige of the army and naval services destroy the belief in the stability of a military lifestyle. As a result, many ordinary and non-commissioned military personnel do not agree to renew the contracts. 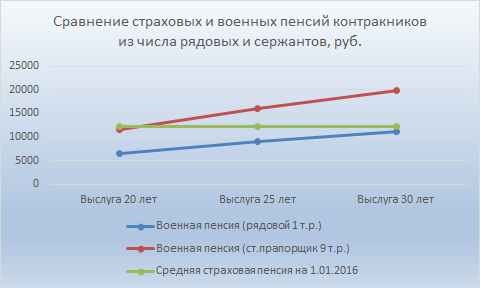 The figure shows that service in the armed forces in primary positions and in low ranks, even with 30 years of service, does not always make it possible to ensure the level of the average civil insurance pension (for 01.01.2016, about 12200 rubles).

As a conclusion, it should be noted that the social status of contract soldiers from among the rank and file and sergeant staff today coincides with the status of “average people” who have average salaries and pensions in Russia. In 2016, in accordance with the adopted budget, this trend will not change.

But military service is a special type of civil service, which implies additional difficulties and the need to risk health and life. Therefore, to solve the problem of further growth in the number, and even more so, the quality of military professionals from among the rank and file and sergeants, it is necessary to index the pay and military pensions in a timely manner and not lagging behind inflation.

Ctrl Enter
Noticed oshЫbku Highlight text and press. Ctrl + Enter
We are
No strategic reservesMilitary reform as an integral part of the security concept of the Russian Federation: Systematic dynamic assessment
Military Reviewin Yandex News
Military Reviewin Google News
92 comments
Information
Dear reader, to leave comments on the publication, you must to register.