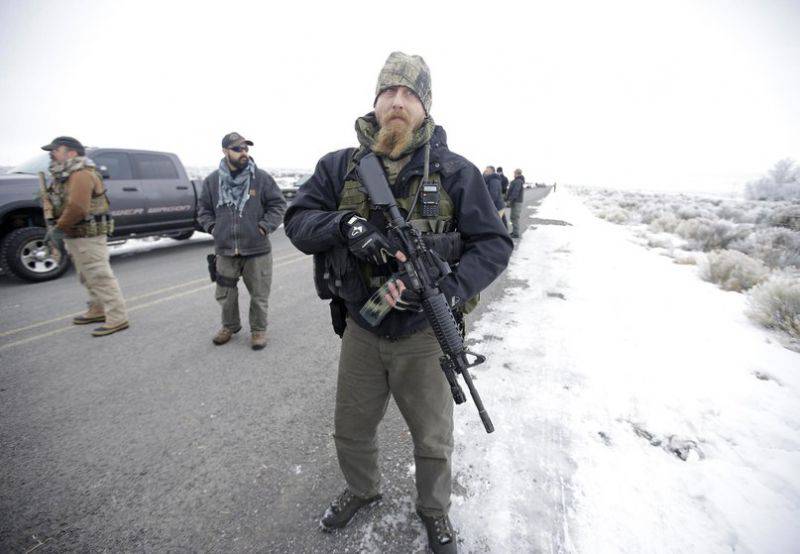 A few days ago, the media passed information about the confrontation in Oregon between the FBI officers on the one hand and the local "police" (voluntary armed groups) on the other. Passed quite casually, although there are many interesting and iconic moments in these events.

So, the dispute between local farmers Stephen and Dwight Hammond, on the one hand, and representatives of federal authorities defending the local Malheur National Wildlife Refuge, on the other, was the reason for the conflict. The Hammonds each year set fire to the remains of straw in their fields, which several times led to fires in the reserve, as a result of which they were still accused of incendiary (arson) and planted.

It seems to be a clear case, the feds are right and there can be no complaints. Well, on euromaidan in Kiev, it was also clear that the “oni-children” were beaten up for work - they were tossed with stones and explosive bags. The reason is clearly contrived. But it was not there.

So here - they immediately came running both local Rednecks (in the north-west of the United States, they also exist, not only in the south), and everyone dissatisfied from other states. They organized a quick "people's militia" and seized several administrative buildings in the state capital.

Other farmers and cowboys support the police and the demands to free the Hammonds, and also declare that the federal government has taken almost all the land on which they used to plant livestock, displacing herders and farmers from their homes that their families have been using and cultivating for several generations.

Later, the leader of the “militiamen” Ammon Bundy, also a hereditary farmer (only from Nevada), met with groups of radical anti-government organizations “Pacific Patriots Network”, “Oath Keepers” (those still scumbags) and “III%” who came to help him and agreed about joining forces.

Bundy also claims that the feds are putting pressure on Hammonds and other farmers, forcing them to sell their land, and states that those gathered "are fighting against tyranny."

Among those who gathered were many US Army veterans (contused on the whole head on the basis of the constitution, freedoms, founding fathers and other rubbish). They are well armed and able to handle weapons.

Instead of negotiation and search for a compromise, the local sheriff, with the support of the federals, “sews” the protesters extremism, vandalism, insulting the police officers in the performance and the threat to the local population.

It is indicative of the video of the former marine John Ritzheimer, who says goodbye to his family, because he is preparing to die in the struggle for "the right version of the United States."

Personally, I consider them a gathering of complete slaps, but they can be understood. They were told all their lives that the USA is a stronghold of freedom, but in reality it is a police state with a system of total surveillance, with “patriotic acts”, with the arbitrariness of the federal forces and with the dictatorship of transnational corporations (TNCs) that virtually destroy the small and medium entrepreneurship, establishing its monopoly, including in agriculture. And the choice they have in this case or become schizophrenic, or rebel.

Moreover, in American mythology, Jesse James and Sundance Kid are heroes who were forced to rob banks and fight with the Pinkertons by the policies of corporations that drove them from family lands. So any such riots against the federal authorities are simply a reproduction of the national myth.

As the commentators rightly point out in the discussion of this newsThis is not the first such case. Both last year and earlier there were similar confrontations of farmers against federals, when several hundreds of armed “patriots” came to help farmers.

There are hundreds of radical extremist and separatist groups like the Oath Keepers in the USA. They are armed, trained, motivated, ideologically charged and disciplined. According to the most modest estimates, the total number of such groups exceeds 150 thousand people, including many former military. There are similar groups among criminals, including the so-called “Aryan brotherhood”, which has offices in almost all US prisons (they have their own hierarchy, as well as a system of communication and coordination).

Not shot in Nevada - shot in Oregon. Do not shoot in Oregon - shoot somewhere else. The very first mass armed clash will generate a new mythology and will trigger a significant increase in separatist sentiment. If you shake the box with the old dynamite for a long time, it will surely explode.

By the way, there is a rather large (about 10 thousand) community of Russian Old Believers in Oregon, so they may urgently need the presence of Igor Shooter to create an Orthodox army. And then something he just bored in Russia ...

Ctrl Enter
Noticed oshЫbku Highlight text and press. Ctrl + Enter
We are
About Stalin and KhrushchevWhat you didn't want to know about England
Military Reviewin Yandex News
Military Reviewin Google News
117 comments
Information
Dear reader, to leave comments on the publication, you must to register.