We are waiting for the emir to visit

January 15 2016
40
Referring to TASS and Sputnik, the Russian media replicate news about the upcoming visit of the Emir of Qatar Tamim bin Hamad al-Thani to Russia. The visit may take place "very soon", that is, in the very near future. According to an unnamed source, the emir may fly to Moscow next week. However, there are no official statements about the visit yet. 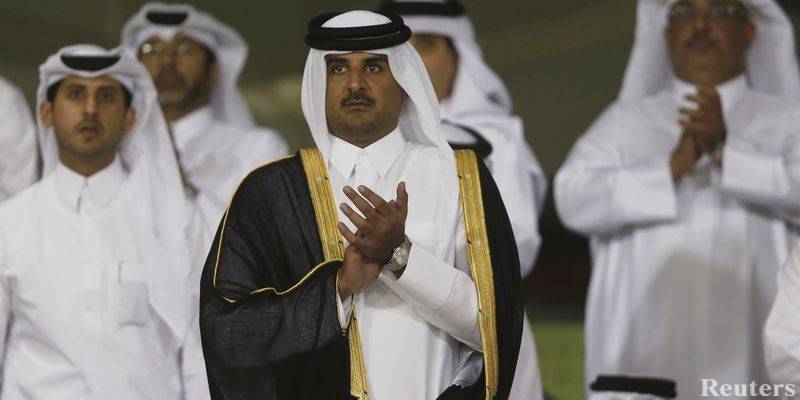 “Such a visit is planned and can take place very soon,” said an unnamed agency interlocutor.

Another source, also unnamed, said that the emir could arrive in Russia next week.

In the evening of the same day, similar information appeared on the site. RIA News".

The visit of the Emir of Qatar to Russia is scheduled for the near future, a Qatari diplomatic source told the Sputnik news agency, the publication indicates.

“The visit is scheduled, preparation is underway. However, we do not know the exact date; I think next week, but there is no official statement about the visit yet, ”said an unnamed source.

According to him, the Emir is scheduled to meet with the leadership of Russia.

Recall 25 December last year, a meeting of the Foreign Minister of Qatar, Khaled bin Mohammed al-Attiyah, with his Russian counterpart Sergei Lavrov. After the talks, it became known that the parties discussed the situation on the energy markets. Russia and Qatar, as it turned out, not only complement and support each other in the energy markets, but also agreed to continue this cooperation.

However, the words about energy carriers and cooperation in the field of trade in raw materials did not in any way affect the opposing positions of Qatar and Russia on the Syrian issue.

After talks with Khaled bin Mohammed al-Attiyya, Sergey Lavrov said only about “understanding.” “Following today's talks, we have an understanding with our Qatari colleagues that we can contribute to the process of forming such a delegation and the beginning of inter-Syrian negotiations to be carried out constructively,” the minister said. "Euronews". “I will not go into details, but this understanding has been achieved.”

The ability to "contribute", I suppose, is not at all something that actually contributes. The differences between the positions of Qatar and Russia are so great that Lavrov had to admit it.

Russia and Qatar were unable to resolve the differences in the approaches to the question of the future of Bashar al-Assad, leading "BBC" the words of Sergey Lavrov, spoken by him after negotiations in Moscow with a Qatari counterpart.

Lavrov explained that the parties could not find understanding on the question of the legitimacy of Assad. Moscow regards Assad as a traditional ally, and the Qatar authorities believe that the Syrian President is guilty of war crimes and should leave his post.

Recall, Al-Attiyah is the same politician, whom many experts consider to be the organizer of the civil war in Syria. In addition, it is widely known that Qatar is suspected of supporting the "Islamic State" and condemned Moscow for supporting Iran. Finally, Doha simply threatened President Assad with an invasion of Syria.

“If a military invasion protects the Syrian people from a tough regime, we will do it,” al-Attiyah said in October 2015.

It must also be recalled that in 2011, the Russian ambassador was beaten in Qatar. Russian Foreign Ministry said on Moscow’s lowering of the level of diplomatic relations with Qatar because of this incident.

The opinion of Qatar's ruling circles of experts specializing in the Middle East is interesting.

The President of the Middle East Institute, political scientist Yevgeny Satanovsky, in December 2015, described the head of the Qatari Foreign Ministry as Middle Eastern cardinal Richelieu.

“It was this man who de facto“ put ”at the head of Qatar the current young emir Tamim al-Thani. Al-Attiyah did almost impossible for the Arab world: he organized a peaceful transfer of power from father to son. It is he who alone controls the foreign policy of Qatar. Al-Attiyah comes from the richest clan in Qatar, his brother is the defense minister, and huge supply contracts go through him weapons from the USA, Belarus and other countries, ”an expert told the newspaper "Sight".

“His personal career and future depend on the outcome of the Syrian conflict, so he put a lot on it. If the Russian VKS manages to leave Qatar, Turkey and Saudi Arabia with a nose in Syria, then Al-Attiyah will lose his present position. After all, who were these people 150 years ago? They were ordinary pirates of the Persian Gulf, ”the expert recalled.

“It is Qatar and personally Al-Attiyah who are behind the civil war in Syria,” Satanovsky is sure. - Qatar is the main issue solver in the Middle East. Formally, the most influential person in Qatar is the emir, but another big question is who has real power: the emir or al-Attiy. ”

The scientist directly called Qatar "the enemy" of Russia: "... Moreover, Qatar gradually but surely" wring out "the gas market in our country. Qatar supports the Muslim Brotherhood, an organization that we have recognized as terrorist. The main ideologue of this organization, Yusuf al-Qaradawi, has declared war against us for the third time: Afghanistan, Chechnya, and now Syria, and lives quietly in Qatar under the auspices of the Emir. Listen to at least what they say on the Qatari Al-Jazeera channel about Russia, and everything will become clear. And remember the beating of the Russian ambassador in Qatar. This does not happen with a country with which there may be some common interests. This is the enemy. ”

So, the “protégé” of al-Attiyi, the emir Tamim al-Tani, is going to fly to Russia. What for? What could mean the visit of the "enemy"?

Orientalist, diplomat of the Russian Embassy in Qatar in 2010-2011. Eldar Kasayev believes that the upcoming visit of the Emir "speaks about the success of Russian diplomacy."

"Some criticize the work of our Foreign Ministry, but it has noticeable breakthroughs, including in the Syrian direction," said the expert. "Free Press". “The second point is that the monarchies of the Persian Gulf, first of all, Saudi Arabia and Qatar, are now moving.”

The orientalist is sure that “you need to be friends with Russia, although you don’t want to. The reason is simple: "Without our country, it is impossible to unravel the tangle of Middle Eastern problems."

“The Qatari people are pragmatic people, their elite studied in prestigious universities, many Western advisers work there. Therefore, they are bending their line and want to negotiate with Russia in all possible ways, although the antagonism between states goes beyond the limit. Since I worked at the embassy in Qatar in 2011, the situation has improved a bit. A Russian ambassador appeared who was not two years old. But nevertheless, economically, we do not have any significant projects yet, in the political arena we cross swords, primarily on the Syrian track. From the very beginning, we support Assad, and the Qataris with the Saudis want to overthrow him in order to establish a regime loyal to themselves. ”

And here Qataris are interested in two things: 1) is a confessional ethnicity: they want to overthrow the Shiites; 2) economic - they want to run a gas pipeline through the territory of Syria and then deliver gas to Turkey and then to Europe. “Qatar pursues its goals,” concluded the expert, “and for this, it tries to negotiate with all the players involved in the conflict, including with Russia.”

Nevertheless, the expert believes that there should not be any serious progress at the negotiations now. “The situation is very difficult, moreover, the conflict between Saudi Arabia and Iran has turned up to it, which will undoubtedly be the subject of negotiations with the Emir of Qatar,” Kasayev said. “But the very fact that the dialogue is going on is important, we are trying to negotiate, and before that we only looked at each other through the sights.”

The Arabist, senior teacher of the department of general political science of the National Research University Higher School of Economics Leonid Isaev echoes the orientalist.

“We are unlikely to be able to negotiate with Qatar, but this does not exclude the need for the negotiations themselves,” he said, “SP”. - Over the past year, meetings at the highest level between the leadership of our state and the authorities of the Gulf countries have been frequent. And the emir of Kuwait came to Moscow, and with the Saudis we met several times at the highest level, and with the king of Bahrain. But this has not yet led to dramatic advances. ”

So, we are waiting for the emir to visit. Representatives of the Middle Eastern monarchies in recent months, often in Moscow. The reasons lie on the surface: it is politics and economics. The same Qatar has long cherished the dream of holding a gas pipeline through the territory of Syria and partially displacing Gazprom from the European market. And first of all, for the implementation of this project, B. Assad, an opponent of both political and religious, should be removed from Syria. To achieve this goal, rich Qatar is sponsoring an “opposition” in Syria. Saudi Arabia does the same thing. Therefore, the fate of the Syrian president is the first topic for negotiations with the Kremlin for both Qatari and Saudis.

Observed and commented on Oleg Chuvakin
- especially for topwar.ru
Ctrl Enter
Noticed oshЫbku Highlight text and press. Ctrl + Enter
We are
Qatar as a new favorite in the race of friendship of nationsGeopolitical Mosaic: “Dzhebhat an-Nusra” heads up the security industry, while Francis Boyle believes that Obama is going to start a nuclear war with Russia
Military Reviewin Yandex News
Military Reviewin Google News
40 comments
Information
Dear reader, to leave comments on the publication, you must to register.