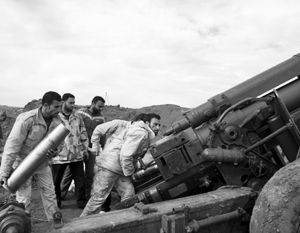 The government’s attack on Palmyra, which was widely announced, can hardly be called an offensive. The maximum advance per day does not exceed hundreds of meters - and this is already almost a month. The Syrian army makes extensive use of helicopter support, as well as barreled artillery, but it fails to gain a foothold in the bare desert without any natural cover.


The proposed operation based on the landing of troops in the rear of ISIL - at several key points on the way to Palmyra - turned out to be impossible due to the banal lack of units prepared for this kind of action. In addition, an increasing number of troops and militia are diverted to the encirclement of numerous jihadist enclaves after their front has actually collapsed in the provinces of Hama and Homs.

Widespread fame история of the city of Madaya, which the Syrian opposition presents as a humanitarian tragedy. In particular, one of the opposition leaders, Riyad (Riyaz) Hijab, who came to Paris for talks with French Foreign Minister Laurent Fabius, especially stressed the situation in this 40-thousand city located near the Syrian-Lebanese border. The city has been under complete siege by government forces for almost half a year, but local jihadist and opposition groups from among the so-called moderates refuse to surrender.
The Riyadh Farid Hijab is the most senior (in the past) “refugee” from the entourage of Bashar al-Assad, who was appointed to identify with himself these still not really identified “moderate forces”. In 2011, he even headed a committee to suppress anti-government actions and fell under the personal sanctions of the US Treasury Department. In the summer of 2012, the Prime Minister of Syria managed to work hard for a month, but apparently failed, was dismissed, and then he and his family fled to Jordan, where he was transformed from a representative of the inner circle of Bashar al-Assad into the “moderate” puppet.

In Paris, Riyad Hijab brought to Fabius all the usual humanitarian pathos in such cases about the need for urgent assistance to the civilian population who are trying to starve the bloody regime. The humanitarian problem in Madai is indeed obvious, but it could have been solved long ago if the local Islamist leaders agreed to the “displacement” that had already become a routine matter. They, however, rested, giving the liberal world community an excellent excuse to again accuse Assad of unconventional methods of warfare. In parallel, the Riyadh Hijab actually forced the head of the French Foreign Ministry to accuse Russia of having waged a war against the civilian population. As a result, Fabius demanded that the government of the SAR end the siege of Madai and "other cities", which does not fit well with the idea of ​​military cooperation in the fight against terrorism.

Who is friends with whom and is fighting in Syria and Iraq
The fact is that in the central part of Syria, the organized resistance of various groups of jihadists was practically crushed, their solid front in the rear of the government forces was destroyed, and only individual settlements remained, which turned into jihadist enclaves. The ISIS fortified area in the eastern suburbs of Damascus is in approximately the same condition. But if there are periodically carried out stripping and "relocation", then in a number of settlements such as Madaya created a stalemate. To storm the city the troops are not going to because of the possibility of large losses, including among civilians, and to lift the siege is to give the jihadists a new advantage. The delay in the siege really leads to humanitarian problems, which they are trying to solve with the help of humanitarian convoys. But the opposition, especially the “moderate”, uses these incidents to conduct a propaganda war. Among the Ukrainian-oriented bloggers, the term “Madai Famine” has already flickered.

At the same time, government forces using the 66th Brigade of the 11th tank divisions supported by Russian aviation launched a major attack on the city of Taxis in the province of Hama. Earlier in the same region, about 30 settlements were liberated on the way to Taxis, which is considered the key to the Ar-Rastan Valley and the Al-Asi River. While the battles are on the northern perimeter of Taxis.

At the same time, the beginning of the attack and the 4-I Airborne Brigade of the Republican Guard, supported by the 137-th artillery brigade of the 17-th Reserve Division. These forces are moving south of Deir-ez-Zor with the support of the Russian HQs. By January 11 they managed to seize the oil fields with At-Thai, which were holding large ISIS forces. According to a number of data, government forces finally occupied At-Tayem only after a four-hour armed clash. ISIS equipped roundabout routes around this settlement with which they supplied the forces of extremists in the military airfield of Deir ez-Zor, a military base and an old cemetery. In the hands of the Islamists, al-Nishan’s oil field and several blocks in close proximity to the city still remain. The 104 airborne brigade, supported by Shiite units, attempted to push the front line away from the airport, but advanced only 200 meters, and the clashes from the eastern perimeter of the air base shifted to the area of ​​the former agricultural technical school, which ISIS uses as the local headquarters.
In the province of Latakia, government troops, with perseverance worthy of better use, again aimed to storm the city of Salma, from which there is already little left - the fortified positions of jihadists in the rocks around were for a long time one of the main targets for the Russian HVAC. Nevertheless, it would be naive to expect Salma to study in one or two days, even with the active support of Russian aviation.

In general, in the mountainous area in the region bordering with Turkey, the offensive is developing in its unhurried course. Government forces are gradually squeezing out key points and small cities from jihadists. At the same time, various groups in this zone receive a stable supply from Turkey, and therefore periodically make attempts at counter-offenses. This is also facilitated by a sharp deterioration in the weather in the region: prolonged rains began in the mountainous and foothill zones, which hindered the planned actions of aviation in reconnaissance of targets and reduced its effectiveness. Taking advantage of the situation, parts of the jihadists attacked after the New Year the city of Burj al-Kasab, but were stopped by government forces.

But in the south of Syria in the province of Deraa, the fighting took on an exceptionally fierce character, which few seem to have expected. Government forces launched an offensive on the large city of Sheikh Maskin, which lies on the strategic road Damas - Deraa. Very quickly, the battles took on the character of the slaughter, and parts of the 82 Army Brigade, relying on their own base on the outskirts of the city, broke through to the center several times, but did not have time to gain a foothold in the new positions. Russian aviation also joined the operation, but the jihadists were able to bring reinforcements and they themselves began to assault the base of the 82 brigade.

At the same time, “Dzhebhat en-Nusra” bears enormous losses in Sheikh Maskin, along the entire motorway, at Daile and in Deraa itself, including the management team. But the jihadists do not want to give up strategic points in Deraa province, as a result the battles turned into a large-scale battle with a predictable result, but with heavy losses also for the Syrian army, which is not satisfied with the command of government forces.

The offensive in the Aleppo area is also progressing at the planned pace. The situation is more complicated in residential areas that control “Dzhebhat al-Nusra”, “Haraket ash-Sham” and other takfirist groups. Fights go in almost every one of them. The sweep of the city threatens to drag on, especially if you remember the peculiar relief, the configuration of the front line and the still remaining supply from Turkey.

On the rest of the fronts, the battles after the New Year were local. For example, in the suburbs of Damascus, the advancement of government troops was reduced to one-time firefights, the destruction of single technicals pick-ups and artisanal rocket launchers. But on the whole, the strategic preponderance of the government forces outlined by the end of 2015, has been felt. Another thing is that now the army is encountering particularly bitter resistance from both ISIS and the rest of the jihadist forces. The reason for this is the advancement of the army and allies to key points of opposition resistance and thereby threatening the very existence of several large centers of anti-government forces. In particular, the defeat in the province of Deraa eliminates the supply system of jihadists from Jordan. And, say, the slow elimination of the enclave to the east of Damascus will finally make it possible to redirect large forces towards Palmyra. And from her and to Rakki hand set.

Ctrl Enter
Noticed oshЫbku Highlight text and press. Ctrl + Enter
We are
The armed forces of Syria on the eve and during the uprising in the republic (2011 — 2013)Turkey vs Syria: the balance of power
82 comments
Information
Dear reader, to leave comments on the publication, you must to register.