The ruin of the reserve "Mikhalovskoe" during the years of occupation

January 15 2016
6
The topic of museums that suffered during the Great Patriotic War, unfortunately, is very extensive: the Nazis have done great damage to our cultural and historical heritage.


Today we will speak about the State Memorial Historical-Literary and Natural Landscape Museum-Reserve of Alexander Sergeyevich Pushkin "Mikhailovskoye", which is on the Pskov land. Here, on the mother’s family estate, Pushkin not only lived while in exile. He often came here, if not for very long. Here he wrote about a hundred of his works, including "Arap Peter the Great" and "I remember a wonderful moment." Here our national genius is buried.

In general, Mikhailovskoye passed into state ownership (it was bought out from Pushkin's relatives) in the centenary year of the poet - 1899. Twelve years later, a museum of memory of Alexander Sergeevich appeared in Mikhaloyvkom. The manor became a nature reserve in the year 1922.

The fate of this corner of the Pskov region during the Great Patriotic War is sad: exactly three years - from July 12, 1941 to July 12, July 1944 - it was dominated by the invaders. The Germans looted and burned the Pushkin house-museum, destroyed the house of Arina Rodionovna’s nanny, almost completely cut down the old park. The territory of Mikhailovsky itself turned into a military object: trenches, barbed wire, mined areas appeared.

When it became known about the approach of the Germans, the museum staff tried to evacuate the most valuable things, but this, unfortunately, failed. Then they buried part of the exhibits in the park. However, this also did not save the values: most of the Nazis found.

In the first days of the occupation, the invaders staged a drunken playing game in the house-museum. They took the plaster sculptures of Pushkin and Gorky and made them targets. Here are the memories of the wives of the forester DF Filippov: “The German headquarters settled in our house-museum. The Germans set the couch, collapsed on old chairs, began to carry valuable things: candlesticks, paintings. What they did not like was thrown away. I saw in one of the halls a portrait of Pushkin - a wonderful copy of the famous work of the artist Kiprensky. The portrait lay on the floor. The canvas was pressed through with a boot. In my eyes, a German soldier was melting a furnace with books ... ” 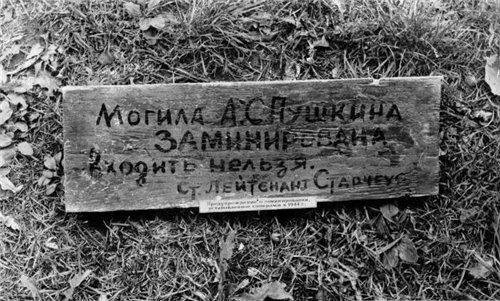 At the station Trigorskaya, which is next to Mikhailovsky, there was a station built specially for the centenary of the poet. Now here was a stable. Here the Germans drove the peasants to work and beat them with batons.

Apparently, at that time, the invaders were so sure of their own invincibility that, intoxicated by this, every moment they tried to assert their barbaric superiority over the Russians. However, 1942 came the year - and the mood of the "invincible" began to change. They realized that with one fear the authorities would not hold, and decided to behave differently. In 1942, the museum was opened to the public. The Nazis "kindly invited" the occupied population of the Pskov land to visit the reserve: "By the grace of Adolf Hitler, the Pushkin Museum opens wide for the liberated workers, where everything connected with the name of the great poet and so dear to the Russian people is opened." Wow, the Russian people were given our own Pushkin, and even by great mercy ...

People came to Mikhailovskoye, not because they submitted to “donors” or believed false words, but to see with their own eyes what was left of the museum. Or maybe they just scooped up power in a place that is dear to them?

In the spring of 1942, the Germans announced that “distinguished guests” would arrive from Berlin soon. The invaders decided to put the manor in order, but in their own way: for example, a table appeared in the lobby, and on it — newspapers, magazines, brochures published by the fascists in Russian. Postcards with the image of Hitler, German calendars. Especially for the arrival of "guests of honor" issued special flyers. On one side - Pushkin's verses, on the other - prayers or proverbs: “A German has an instrument for everything”, “science is not beer, you can't take it in your mouth”, “I could not resist a mane, you cannot hold a tail”. Or another example: on the back of the leaflet with the poem “The Village” there was a note “A bank is a friend of a peasant” (an advertisement of a savings book).

"Distinguished guests" did come, and not only from Berlin. The Nazis obliged the excursions to conduct Afanasyev, the wife of the new director appointed by the Germans (by the way, in the mentions of the museum staff I did not find a single positive response about this man. But I read a lot of statements that he only cared about the interests of the Germans and never even tried to defend reserve). After the excursions, Afanasyev usually asked to leave reviews in the guest book. And reviews appeared. Here is one: “We, soldiers of great Germany, visited the museum and saw how they lived here with the king.” About Pushkin during this time the Germans did not write a word. But the Russian guests (who, of course, the Germans did not meet, but simply missed), wrote: “Pushkin's genius is alive. And she will live now and forever! ”

On the territory of the reserve has always lived a lot of songbirds. The Nazis quickly noticed it. They ordered local foresters to appear and, on pain of death, ordered rare birds to be caught in order to be sent to Germany. Not only was this occupation deeply repugnant to foresters, but they are people of respectable age, and catching birds is not an easy task. 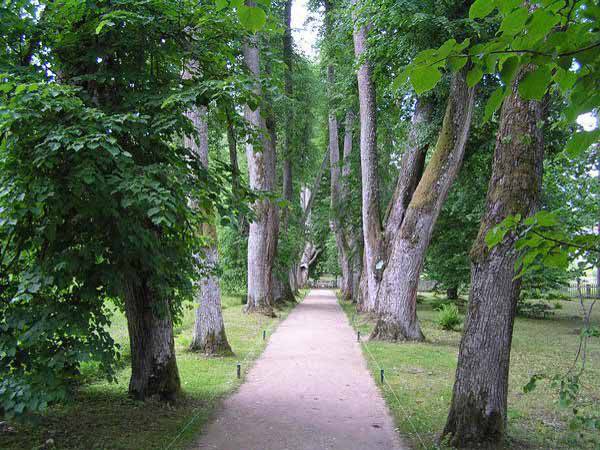 The invaders noticed that there was a hollow in the old linden trees where bees settled. Armed with spraying devices and spoons with long handles (stolen from a nanny’s house), they scraped away honey from pity.

Or another order - to select and cut down fifty thousand of the Mikhailovsky pines for military purposes. Director Afanasyev executed this order, and soon a mountain of logs grew on a toe between Lake Malenets and the River Sorotiu. As conceived by the fascists, the logs were to go downstream the river Sorot to the city of Ostrov, where at that time the German sawmill was located. However, the partisans prevented this: they managed to burn down the felled forest.

June 1942 of the year was approaching - one hundred forty-third anniversary of the birth of Pushkin. The Germans announced that on this day celebrations would take place in Mikhailovsky and even “graciously” returned to the museum some of the items stolen by them. In the newspapers, the occupants published an article entitled “German soldiers saved the mask of Pushkin”: “The Pushkin Corner was not injured from the war. In the village of Mikhailovsky there is a museum, the exhibits of which occupy eight large halls. A few days ago, the German commandant's office transferred the mask of Pushkin to the museum, which was removed by German soldiers from the burning Tsarskoye Selo palace. The noble deed of the German soldiers evokes deep admiration and gratitude in the heart of every truly Russian person. ” The newspaper was forbidden for the museum staff to shoot on pain of death.

Yes, on the poet's birthday, the invaders really staged a rally. But 22 June - "the day of the liberation of Pskov from Bolshevism," they said much more magnificent and solemn.

Pushkino Mountaineers looked at everything that was happening with bitterness and hatred. Many became partisans and underground. Here are the memoirs of A. D. Malinovsky, one of the participants in the underground struggle against the Nazis: “On Pushkin’s birthday, he stood under lindens tank machine gun, on the alley smoked the kitchen on automobile wheels. The cook put firewood in the firebox, foul smelling of bean soup. Automatons hung on a young linden tree - like black unprecedented fruits ... Under the centuries-old spruce, the invaders made a toilet: dug a hole, pulled a string, so as not to stumble ... Bathing was noisy on Soroti, the riverbank was littered with uniforms. The officers were diving, floundering in the water, screaming in bad, drunken voices. Mikhailovsky’s reserve was gone, instead of a quiet corner - an officer’s casino ... " 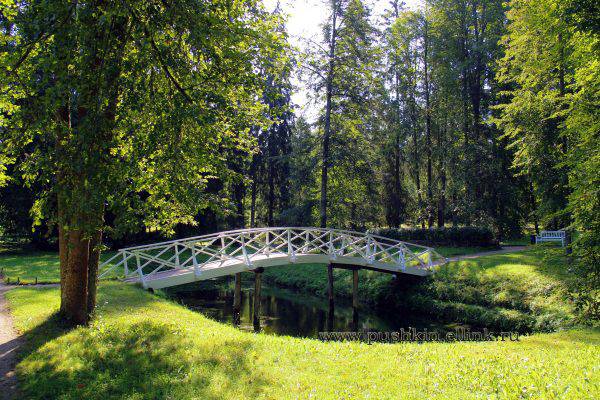 Playing the role of "Pushkin's overseas friends", the Hitlerites, however, were not going to leave the valuable exhibits of the museum in Russia. And at the beginning of 1943, they demanded from Afanasyev to make an inventory of the museum property. He executed the order, and now this inventory is the only document that gives the most complete picture of what the museum of our national genius was before the war. True, the inventory does not include archival documents, books, part of the painting objects - but this proves once again that the Germans did not need the museum itself as an object of memory. It required only its material values ​​and the mandatory destruction of the cultural shrines of the Russian people. After the defeat at Stalingrad, the invaders became increasingly aware that they had to hurry. And here on ten carts, under the protection of armed Germans, sofas, antique chairs, candlesticks were leaving the reserve ... 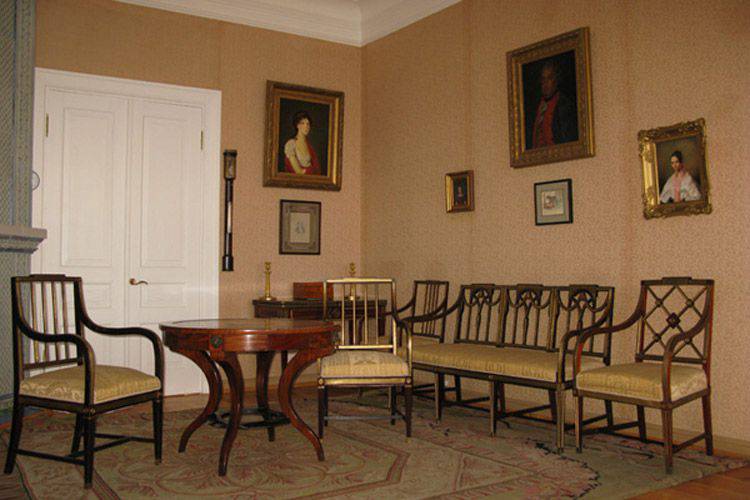 In February, 1944, the front line approached Pushkin places. And on July 12, the Pushkin Mountains were completely liberated from the invaders. Fleeing, the Germans took off the mask of "friends of the poet." They burned the house-museum, built on the foundation of the house where Alexander Sergeevich lived. On the territory of the reserve there were two other houses - one also burned down, and the second one was heavily destroyed. At the entrance to the Mikhailovsky Park hung a large portrait of the poet. He was shot three times, and the park itself was shelled with artillery fire. On the Pushkin avenue staged tank debris, cutting down the largest fir trees. The Assumption Cathedral, built in the sixteenth century at the behest of Ivan the Terrible, was blown up. Destroyed and the cathedral, near which is the grave of Pushkin. The aggression of the invaders was so great that they were not even too lazy to tear sheets from the liturgical church books and documents describing history Svyatogorsky monastery, and scattered them.

This is the terrible picture that appeared before our soldiers-liberators. And the next day, July 13, work has already begun on the restoration of the Mikhailovsky Reserve. It was almost completely restored in the 1949 year, to the poet's 150 anniversary. 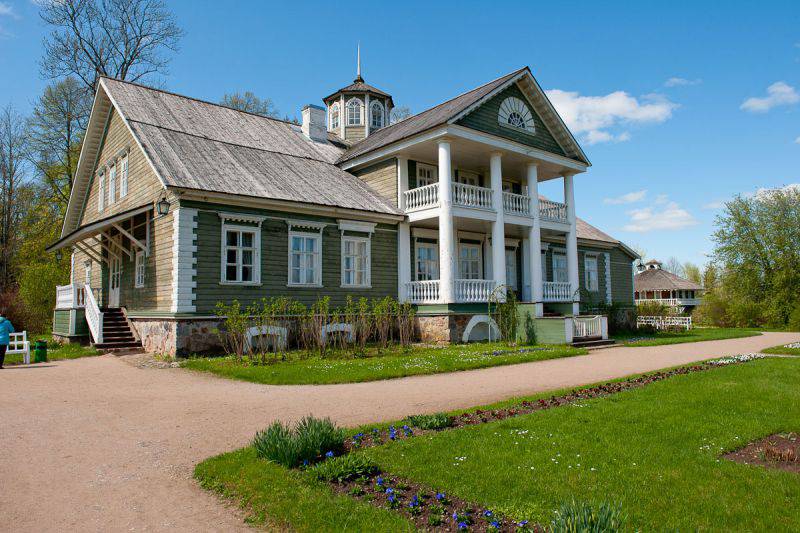 Ctrl Enter
Noticed oshЫbku Highlight text and press. Ctrl + Enter
We are
Belarusian wonders. Is the museum easy?Burt Rutan - Aircraft Genius
6 comments
Information
Dear reader, to leave comments on the publication, you must to register.