January 16 2016
38
The conquests of the Tatar-Mongols struck contemporaries, and even now they are amazing. And Western Europe was on the verge of hysteria in front of formidable Chyngyz Khan warriors who conquered a huge part of the world. So what was the mystery of the Tatar-Mongol military successes? To understand this, more than one generation of domestic and foreign scientists have studied numerous written sources, conducted archaeological research. But very few people paid tribute to military affairs of the Tatar-Mongolian.


To begin with, all outstanding victories and successes were achieved due to the fact that these nomads were born warriors. And due to the brilliant personality of Chyngyz Khan, his iron hand and with the help of the gallant commanders in the army, centralization was carried out, phenomenal discipline was established, and intelligence was brilliantly staged. The enemy was often disunited and experienced various other difficulties, and the Tatar-Mongol generals not only mastered the art of war, but were also well-versed in politics and diplomacy.

In fairness it should be noted that not all opponents were weak, there were many and at the top of power. For example, the state of Khorezmshah with the Kipchak army, the Polovtsians, Russian principalities, the Hungarian kingdom, etc. were very strong. Due to the specifics of the nomadic economy, the number of the Tatar-Mongolian army was small compared with the armies of sedentary peoples, but we know quite a few examples when this mobile and highly organized army, significantly inferior to the number of the enemy, was victorious. An important role was played by the high morale of the Tatar warriors, their courage and resourcefulness. Here is what Josaphat Barbaro wrote in his notes - a prominent political figure in the Republic of Venice, an experienced diplomat (XV century):

“On this occasion, I’ll tell you what happened to me once when I was in Tanya. I once stood on the square; Tatars came to the city and reported that in the grove, about three miles from here, Circassians-riders, numbering about a hundred, hid, and intended to raid the city itself, as was their custom. I was sitting in the shop of the master in dressing arrows; there was another merchant-Tartar there, who came there with a citrated seed. Learning about the Circassians, he got up and said: “Why don't we go to capture them? How many riders are there? ” I answered him: "One hundred people." “That's good,” he said, “there are five of us, and how many riders can you have?” I replied: "Forty." And he said: "... Come, grab them!". Hearing all this, I went to look for Messer Francesco and told him about these speeches, but he asked me with a laugh if I had the courage to go there. I replied that was enough.

And so we mounted our horses, ordered our people to arrive by water, and by noon we flew down on these Circassians. They stood in the shadows, some of them were asleep, but, unfortunately, it happened that a little earlier than we reached them our trumpeter blew. Therefore, many managed to escape; however, we both got killed and captured by about 40 people. But all the beauty of this case refers to what was said about the "crazy brave men." The Tatar, who offered to go to catch the Circassians, was not satisfied with the prey, but single-handedly rushed in pursuit of the fugitives, although we all shouted to him: “You will not return, you will never return!”. He returned after almost an hour and, joining us, complained, saying: “Woe is me, I could not catch a single one!” - and strongly lamented. Judge for yourself what his madness was, because if at least four of the Circassians had turned against him, they would have cut it into small pieces. Moreover, when we reproached him, he turned everything into a joke. ” (Barbaro I. Journey to Tanu. Text reproduced from: Barbaro and Kantarini on Russia. M. Science. 1971.) 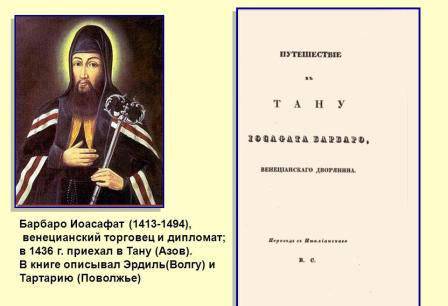 But back to the article. Indeed, the tactics of the Tatar - Mongols was traditional - massive archery, false retreats with ambushes, envelopes, entourage, exhausting the enemy with a long siege. In the overwhelming majority of cases, numerical superiority plays a crucial role in the battle. But it is important to recognize the decisive time and the battlefield in order to concentrate in this place, precisely in this area, superior forces and defeat the enemy, even if he has a general superiority in manpower and armament.

Now what can we say about the armament of the Tatar - Mongol? Indeed, we all have a stereotype that speaks of a Tatar on a short sturdy steed with a bow and arrows in his hands. But at the same time, reading European, Asian, Caucasian authors of the 13th - 15th centuries, we see admiration for the art of archery, mobility, and the phenomenal effectiveness of the Tatar - Mongolian archers. Again we turn to the example that I. Barbaro describes:

“Tatars are great hunters with falcons, and they have a lot of gyrfalcons; they catch birds in the burdock (which is not used here), they go to deer and to another large beast. Krechetov they wear on the fist of one hand, and in the other hold a shit; when they get tired, because after all [these birds] are twice as large as eagles, they substitute one for the arm. At times a flock of geese rushes over their army; then people from the camp shoot arrows as thick as a finger, curved and without feathers. The arrows fly straight, then turn and fly across the birds, crushing - when they are overtaken - the neck, the legs, the wings. Sometimes it seems that these geese are full of air; from the cry of the people, they are stunned, frightened and fall to the ground. ” (Barbaro I. Journey to Tanu. Text reproduced from: Barbaro and Kantarini on Russia. M. Science. 1971.)

According to many researchers, the Tatar bow was the most powerful in the Middle Ages. The tension of the famous English bow was about 35 kg., And shot this bow at a distance of 230 meters. And the Tatar bow was complex with horn and bone patches and received reinforcement in 40 - 70 kg., Moreover, the Tatars had a special shooting technique and shooting from horses, their arrows covered the distance to 320 meters, while they could break through all the existing armor of that time .

Carved lining on the bow (bone). XIII-XIV centuries. from the fund of Engels Museum of Local Lore.

The arrows were of two types, with small light and large heavy tips. 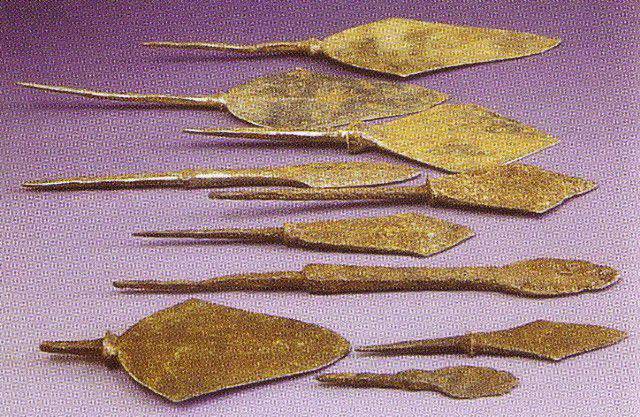 Arrows with small light tips were hinged shooting for long distances, when the enemy had to be exhausted and wounded. And arrows with large tips were used at close range to ensure the destruction of the target. With the help of a powerful bow, the thickest armor was penetrated and incised wounds were inflicted on both the enemy and his horse.

A well-developed tactical trick of the Tatars was a false retreat, when several units were sent forward, which showered the enemy from a long distance with clouds of arrows, forcing him to attack. After that, the Tatar - Mongols rapidly left the collision. The enemy was drawn into the pursuit and in a certain place the fresh forces of the Tatars were waiting for him. Usually it was heavy cavalry, wrapped in armor-clad armor, including horses. They crushed the tired and outdated enemy. For example, such tactics were used in the Transcaucasus in the battle with the Georgian troops and against the Russian-Kypchak detachments on the r. Kalka.

Yes, the Tatars also had heavy armor, and this was first proved by the famous Swedish armory researcher B. Tordeman in his remarkable book The Battle Arms of Visby. Our famous compatriot, MV Gorelik also confirms this in a number of his works. (The riddle of the conquerors. Knowledge is power. 1974. No. 4; Medieval Mongolian armor. Third International Congress of Mongolians. Ulan-Bator, 1978; Army of Mongols-Tartars of the X-XIV centuries. M., 2002., Etc.) 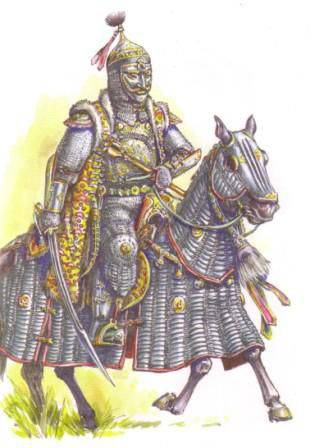 Another main tactical technique described in the XVI century. Roman Empire ambassador Sigismund Herberstein, calling it "dance." Moscow nobles who participated in battles with the Tatar - Mongols, described it as a "round dance". Thousands of archers lined up in front of the enemy's line, moving in a circle, showered the enemy with heavy arrows from close range, approximately 20 - 30 meters and from the most advantageous positions sideways forward and sideways back. This provided a good archer with good equipment guaranteed hit and fatal defeat, or a severe wound to enemy soldiers. For such a reception needed a clear organization and iron discipline. But, as S. Herberstein wrote, if for any reason, at some point a failure had occurred, the line broke down at full speed and defeat was inevitable. But with good circumstances, demoralized, strongly reduced in number enemy attacked the cavalry cavalry with swords and spears, completing the rout. After the battle came light cavalry and destroyed the fleeing. But there have been cases when, with such tactics, the enemy fled, without waiting for the heavy cavalry to strike.

Sources:
according to the book of K.A. Ablyazova Historical fate of the Tatars. From tribe to nation. T.1, Saratov. Scientific book, 2012
http://www.vostlit.info/Texts/rus9/Barbaro/frametext.htm

Author:
Mangel olys
Originator:
Source: according to the book K.A. Ablyazov The historical fate of the Tatars. From the tribe to the nation. T.1, Saratov. Scientific book, 2012. Link: http://www.vostlit.info/Texts/rus9/Barbaro/frametext.htm