Japan hurried to solve the problem of the "northern territories"

January 14 2016
168
Since the beginning of the year, Japanese politicians have attended to the conclusion of a peace treaty between Japan and Russia. 4 January this was announced by Prime Minister Shinzo Abe. He described the abnormal situation when, at the end of the Second World War, because of disputes over the islands of the Kuril Ridge, a peace agreement was not signed between our countries. Abe insists on negotiations with Vladimir Putin to resolve controversial issues.


The dispute is seventy years old

A week later, the head of the ruling Japan Liberal Democratic Party (LDP), Masahiko Komura, joined the discussion. “After the end of the Second World War, 70 years have passed, and a peace treaty has not yet been signed between our countries. This is regrettable. Now in our countries there are strong leaders in power, and therefore we must take advantage of the situation and make efforts to conclude a peace treaty, ”said Komura on Monday at a meeting with the head of the State Duma Committee on Constitutional Legislation and State Building, Vladimir Pligin.

Strictly speaking, the essence of the dispute is only to conclude an agreement on Japanese conditions, that is, to return to them the so-called "northern territories" - the islands of Iturup, Kunashir, Shikotan and a group of small islands with the general name Habomai (it includes the islands Yuri, Green, Tanfilyeva, Polonsky and Anuchin). All of these areas for a long history walked from Japan to Russia and back, until the results of the Second World War did not finally come under the jurisdiction of the USSR.

The affiliation of the islands to our country was not disputed until the 1951 year. According to the decisions of the Yalta and Potsdam conferences (these documents are signed by the leaders of the United States, Great Britain and the USSR), the condition for the Soviet Union’s participation in the war against militarist Japan was the return of South Sakhalin and the transfer of the Kuril Islands to it. The three great powers recorded this quite definitely and unequivocally. Later, the territorial changes of Japan will be reflected in the Surrender Act and Memorandum of the Allied Commander-in-Chief to the Japanese Imperial Government No. 677 of 29 in January 1946, in which all the islands north of the coast of Hokkaido, including Habomai and Shikotan, were excluded from the jurisdiction of Japan.

Fix post-war reality and the San Francisco Peace Treaty 1951 year. Japan will not only sign this document, but also ratify it, giving up "all rights, legal grounds and claims to the Kuril Islands and to that part of Sakhalin Island and the adjacent islands, over which Japan acquired sovereignty over the Portsmouth Treaty of September 5 of 1905 of the Year" . 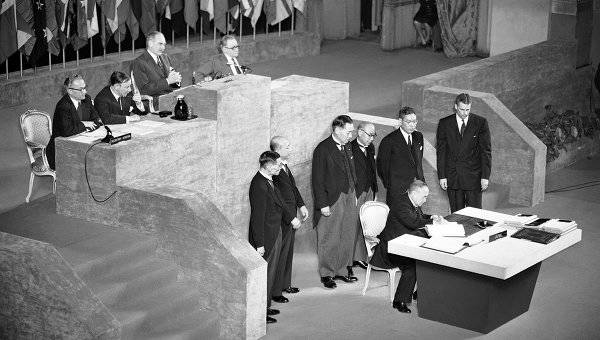 It would seem, everything is clear. However, under the San Francisco Treaty there is no signature of the Soviet Union. The peace agreement only matured six years after the war. By that time, the relations of the winning countries had completely deteriorated. Post-war confrontation began. The Soviet Union considered the treaty to be separate, because the representatives of the country most affected by the Japanese, China, were not allowed to attend the conference. In addition, according to the Soviet delegation, the document contained "white spots", did not take into account not only the interests of the Soviet Union and China, but also many countries of East, Southeast and South Asia, which militaristic Japan passed through the military rink.

The reason is serious, but not the main one. The Soviet Union did not sign the San Francisco Treaty, primarily because the text did not confirm the previously reached agreement that the USSR became the copyright holder of the Kuril Islands and southern Sakhalin with the adjacent islands, which Japan refused.

Experts agree that the sovereignty of the Soviet Union over the returned territories did not require binding in a peace treaty. The historian Boris Tkachenko, for example, writes: “Similarly (that is, without a peace treaty and in accordance with the decisions of the Yalta and Potsdam conferences) were transferred: to the possession of the USSR — Konigsberg with the adjacent area of ​​East Prussia; in possession of Poland - part of the territory of East Prussia and Danzig (Gdansk), Silesia and other areas of the right bank of the Oder and West Neis rivers; and in possession of Czechoslovakia - the Sudetenland. All of these territories belonged to Germany before the Second World War. ”

To understand this legal conflict, the Soviet Union and Japan decided only ten years after the war. In 1956, the Moscow Declaration of Peace was signed. After its ratification, our countries restored diplomatic relations and in fact ceased the state of war. The declaration outlined approaches to solving the territorial problem, but the Americans intervened.

Let us return once more to the works of the historian Boris Tkachenko. He writes: “US Secretary of State J. Dulles 19 August 1956, informed the Japanese foreign minister, S. Shigemitsu, in the event that“ if Japan recognizes the Soviet Union with full sovereignty over the Kurils, we will conclude that we are also entitled to full sovereignty over the Ryukyu Islands "and" The United States can remain forever in Okinawa, and no Japanese government will remain in power. "

Since that time, Japan began to act on the orders of the Americans, to demand the return of the territories, now referred to as "northern." And very fascinated by the process. Even the day of the "northern territories" entered into her calendar. It coincided with the anniversary of the conclusion of the Simodsk agreement between Russia and Japan - February 7 (January 26 old style) 1855 of the year - and now recognizes the borders between our countries, written in the agreement of the last century.

The question - what the Japanese are so grabbed into these mostly desolate cliffs - has two unequal answers. First of all, the ocean waters near the Kuril Islands are rich in commercial fish, in which the islanders are interested. But this is not important. The return of territories lost in the war requires the pride of the samurai heirs. The spirit of the former empire and the memory of battles are still alive in them, when they thronged the Russian Empire on the Far Eastern frontiers.

From this arises self-confidence that the problem will be solved on Japanese terms. It was not by chance that the Japanese were actively involved in the sanctions pressure on Russia while talking about concluding a peace treaty and arrogantly hoped that, under the pressure of sanctions, the Russian President would visit Tokyo to discuss the territorial problem. Last May, Japanese Prime Minister Shinzo Abe talked about this publicly and even notified the American President of the invitation to visit Tokyo made by him to Vladimir Putin. The visit of the President of Russia was to be prepared by the head of the Japanese Foreign Ministry, Fumio Kisida. He had already set out for Moscow, but canceled his trip because of a visit to the Kuril Islands by Russian Prime Minister Dmitry Medvedev.

The demarche of the Japanese minister crossed out the previous work of the diplomats, but he demonstrated Tokyo’s intention to solve the problem with strong negotiating positions. At least that's how the Japanese saw it. They were confident in their economy, and now they pulled up the capabilities of the armed forces.

After the war, the United States took the Japanese under a protective umbrella. In September, 1951 of the year in San Francisco, Japan and the United States signed the “Security Treaty” on military alliance and cooperation. This document gave the Americans the exclusive rights to deploy their military forces in Japan, and any attack on Japan has since been considered an attack on US forces.

The doctrine has changed over the years, without affecting the essence of the treaty. In 1989, the United States called Japan "the main ally of the United States outside NATO." The possibilities of the islanders themselves were limited by national defense forces, whose actions outside the borders of the country were forbidden by the post-war constitution.

Japan overcame this ban only last fall, when its parliament allowed the Self-Defense Forces to be used to participate in military conflicts abroad. The decision was driven through by “strong leader” Shinzo Abe. There were objective reasons for this. Over the years, the Self-Defense Forces have grown to the size of the tenth army in the world. On the islands, they are already becoming cramped.

The Japanese were equipped with the latest armored vehicles and aviationbuilt a powerful modern fleet. It consists of two dozen submarines, about forty destroyers, including those with a displacement of 5000 tons. Three helicopter carriers were commissioned. The last time the Japanese fleet received such a ship last March. This is the Izumo destroyer helicopter carrier, which is close in capabilities to the French Mistrals advertised here. The Japanese fleet is waiting for another ship of this class by 2017.

One can only guess: where is this armada aimed, capable of transferring up to two thousand paratroopers with weapons under cover of fifty helicopters? Meanwhile, the Japanese are investing in the army all the new money. At 2015, the year has set a record military budget for the country, exceeding 42 billion US dollars. In a word, the demarches of Japanese politicians are built not only on national ambitions, but also on the country's military capabilities.

Now, after last year’s pause, the Japanese were in a hurry. They are looking for contacts with Russian politicians, make statements about readiness to conclude a peace treaty. Experts link this activity with the success of Russia in rearmament, which the world clearly felt last year. Despite the crisis, the pace of this rearmament is only increasing. So, the position of Russia in the world will only strengthen. Therefore, the Japanese are in a hurry with proposals to conclude a peace treaty between the countries.

Does Russia need him? Most likely no. Otherwise, our diplomats, as they say, would not have got out of Tokyo. Japan also does not need peace (it has already become a given in relations between countries), but only “northern territories” - that is, the return of the losses of the Second World War. For them, it is a loss. For us - the Russian land, watered with the blood of grandfathers. The memory of them should not lull the sweet talk of the Far Eastern neighbors about peace, cooperation and even friendship.

Ctrl Enter
Noticed oshЫbku Highlight text and press. Ctrl + Enter
We are
Eastern turn: what is he carrying to us?Japan and Russia: where does friendship come from?
Military Reviewin Yandex News
Military Reviewin Google News
168 comments
Information
Dear reader, to leave comments on the publication, you must to register.