What was it? On the visit of Gryzlov to Poroshenko

January 14 2016
164
Really, what was it? Strange last meeting. Strange behavior of the President of Ukraine. Peculiar reaction Rada. It seems that the oddities are piled on top of one another and should soon collapse in one big, smelly heap. However, as if by magic, the puzzle of the oddities can be folded into a picture. And we will try to fold this picture as we see it. 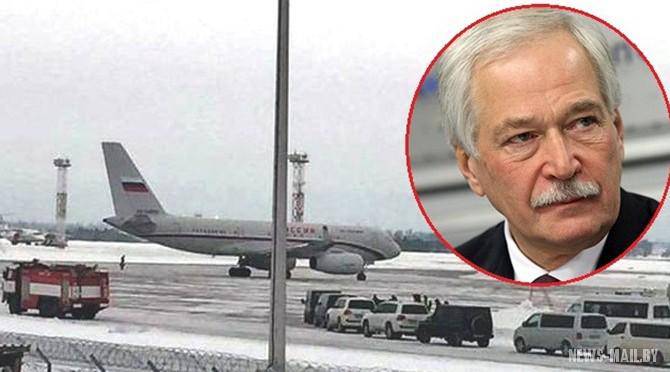 Let's start a little from afar. What were the objectives of the Maidan in relation to Russia?

It can be said that all items, except the number 1, were met. But, as it turned out, the item number 1 was enough above the roof, so that the situation went off the intended rails. For the Donbass arose, and not only it arose with some of its ambitions, but also really confirmed in practice the validity of its intentions.

It seems that Peremoga has arrived, but, as we have already written in due time, the question arose: who pays for the banquet?

It is clear that the main troublemaker of the Ukrainian problem, the USA, was counting on Europe. However, in Europe there was its own zrada, which crowds of refugees put Europe on its ears. And Europe has become really not up to Ukraine. His, as they say, problems piled on in the literal sense of this expression.

The United States, too, cannot continue to clear up Ukrainian problems. And also for political reasons. Obama is leaving, leaving quite ignominiously, but who will replace him is still a question. The same Clinton is pretty cool about Ukraine, and Trump's arrival in general can put a fat cross on all the aspirations of the Ukrainian authorities about overseas assistance.

Where to go Poroshenko? The only seemingly ally, kissed by Erdogan. But Erdogan also has something to do except to support Ukraine. And today's allies of Erdogan are not Poroshenko’s allies.

It turns out a vicious circle, which, nevertheless, it is necessary to break. Unless, of course, there is a desire not to play in a landfill stories.

Yes, there is still Russia. True, Russia has already poured so much of everything that it’s not worth hoping that it will come to a solution to the Ukrainian crisis on acceptable terms. Yes, and we have our own problems no less than the allies of Ukraine.

Nobody wants to pay for the banquet.

Nevertheless, it is necessary to do something. And do, before it's too late. Apparently, Poroshenko’s team came to similar conclusions, once they took such a step as the invitation to “talk” Gryzlov. And here went the nuances.

If you believe the statements of the Ukrainian side, Russia and Ukraine are in a state of war, albeit a hybrid one, but a war. No such confrontation, especially armed (as Ukraine insists on), does not imply the arrival in the capital of the country of a guest from a state located on the other side of the barricade. This is complete nonsense. Well, on neutral territory, in Minsk or there, Paris. But landing an airplane from the Presidential Detachment of the Russian Federation in Borispol is not even a spittle. This is a complete slap all those who adhere to the official Ukrainian opinion.

And we have to admit that the leader of the Radical Party, Oleg Lyashko, did not offer such a stupid thing: to arrest Gryzlov and imprison him, just as the British authorities did with Rudolf Hess who suddenly flew to England. If we are at war, then we are at war. There are no relations between countries, which means no. And do not understand what actually goes.

But nobody asked Lyashka, because the plane not only landed and flew back, as if nothing had happened. Wipe, Oleg Valerievich!

By the way, about Gryzlov. Remember that immediately after the signing of the "Minsk-2" Putin presented Hollande and Merkel as a special representative in the contact group of a completely different person - namely, his adviser Surkov?

Then it provoked in Kiev the most powerful on hysterics, which was expressed in the fact that Surkov was accused of ... shooting the Heavenly Hundreds. The Ukrainian authorities found it difficult to answer questions, what was the role of Vladislav Yuryevich in this action, how he organized this shooting, held the machine gun in person or only led the process. Nevertheless, in Kiev, they quickly brought a criminal case to Surkov, and it is clear that he could not carry out his duties in the light of such events.

In Kiev, they celebrated Peremog, because Zurabov, who headed the commission for resolving the Ukrainian-Donbas problems, was quite happy with the Ukrainian side.

But in a fever, the Ukrainian rulers forgot that the Russian president always adheres to the same strategy: if your first sentence - and it is usually white and fluffy for your opponent - was rudely rejected, then after some time another, much tougher one will fall from the sky far less pleasant. And it will not be rejected already, because it will be formulated in other circumstances.

We can talk a lot about Gryzlov and Surkov in terms of comparison, but the difference is clear. And the comparison in terms of professional fitness is not in favor of Surkov. One thing is the development of projects, another thing is their implementation by any means. There is definitely Gryzlov preferable. And he has more authority.

What Gryzlov and Poroshenko talked about, of course, will not soon become public knowledge, if at all. One can only guess. It seems to us that we will be able to see the consequences of this meeting in the very near future.

It will not cause the greatest surprise if in the near future Poroshenko introduces to the Rada questions ... federalization.

The regions (and this is not only about the Donbas) have long been waiting for this moment. If you look more closely at what is being written in the Ukrainian media, then they talked about federalization in much the same way as two years ago about integration into Europe. But if European integration is a very, very dubious affair, then federalization, liberties and the ability to dispose of locally at its discretion are, as it were, closer.

In general, it is very logical to take some steps to ensure that Ukraine does not collapse completely and irrevocably. Federalization is very appropriate here, modeled on the United States or Switzerland. It seems to be one political roof, one Constitution, and in place (state, canton, region) everyone blows into the tune they can. Confederation, such a term is more appropriate.

Ask: what does Russia have to do with it? And despite the fact that the Donbass. Donbass, which did not die out, did not die out, and lives for itself and is doing. With the help of Russia, of course. The Donbass is the boil that will never allow the Ukrainian authorities to sit directly in the chair.

In order to reduce the influence of Russia in the Donbas, do not give a final break away to the territories, which are tied to the economy of Ukraine (very, very tightly), Poroshenko may even go to the restoration of the territories of Lugansk and Donetsk regions in the former borders.

But you have to pay for this by the fact that these territories will remain part of Ukraine. But on other than before conditions. It is clear that in other regions they believe that they are no worse, and they also want independence. But it is also clear that Donbass will have to give more than everyone else.

Will they win in the Donbas? Definitely, yes. An economy that actually breathes its last and is working according to shady contractual schemes will be able to work precisely in the framework to which it was tied. We have written about this framework. Donetsk metallurgy cannot work normally without Krivbas ores, Nikopol fluxes, the Mariupol port and the Kiev export roof. Alas. But, in conditions of greater independence, it is possible to solve many questions on the revival of the same metallurgy and metalworking. The question is only in the conditions.

The question of whether Russia will pull back the revival of Donbass on its own, is not even submitted for discussion. And this is not a “plum”, as some readers like to shout, this is the harsh reality of our days. Do not pull.

Under the conditions of the creation of a certain Ukrainian confederation, Poroshenko is quite possible to maintain both the power (albeit not the same as today) and, most importantly, the country.

Yes, “pawns” like Yatsenyuk and Avakov will have to be sacrificed, but about Arseny and so everything is clear - “not a tenant”. Mishiko is also not a figure for establishing a dialogue with Russia. But again, there is a nuance in the form of the same Azarov. We believe that we will hear more about him.

It was to discuss issues of this level that the arrival of Putin’s personal representative, a person of his circle, Gryzlov, was required. If this is indeed the way we imagine, then ... wait News from Poroshenko.

Ctrl Enter
Noticed oshЫbku Highlight text and press. Ctrl + Enter
We are
Situational analysis of the death of the MH17 flight (Malaysian Boeing 777), made on the basis of engineering analysis from 15.08.2014Results of the week. “You are already indebted to the sea: neither the bottom nor the coast”
164 comments
Information
Dear reader, to leave comments on the publication, you must to register.