January 14 2016
2
The Chinese leadership began a major reform of the armed forces. In order to increase defense capability, it was decided to change the composition of the various structures of the People’s Liberation Army of China (PLA) and make major adjustments to its management systems. The new reform implies the dismantling of some existing structures and their replacement by new organizations. In addition, some changes related to the types of armed forces and the types of troops were proposed and already implemented.


According to official data, all changes in the structure of the armed forces "are aimed at realizing the Chinese dream of building a strong army." By changing management structures and some other reorganizations, it is planned to build a modern military system with Chinese characteristics. To date, some changes in the structure have already been made, and plans for the near future have been announced.

December 31 A solemn ceremony took place in China, giving the start to the reform of the army. The first step towards a renewed army was the formation of the PLA Rocket Forces and the PLA Strategic Support Forces. During the ceremony, PRC Chairman Xi Jinping presented flags of the armed forces with representatives of the troops. It is reported that the head of state noted the key role of the newly created Rocket Forces in ensuring national security, and also set the task to expand the possibility of nuclear deterrence and strengthen forces to deliver accurate strikes at medium and long ranges. 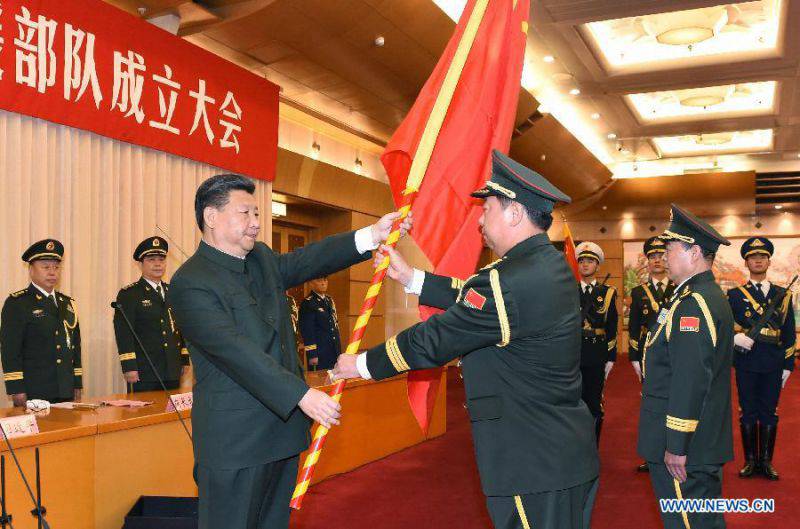 The Rocket Forces of the People’s Liberation Army of China were formed on the basis of the 2 Artillery Corps (also called “Second Artillery”), which was previously responsible for the operation of strategic nuclear weapons and delivery systems and was directly subordinate to the Central Military Council. The hull was formed on 1 on July 1966 of the year and continued service until recently. As part of the new reform, a separate branch of troops, which in fact was the 2 artillery corps, was transformed into a full-fledged type of armed forces.

Such changes are unlikely to have a serious impact on the structure or potential of the troops, but they can be of great importance from a military-political point of view. The official appearance of the PLA Missile Forces in an updated form can demonstrate Beijing’s intention to protect national security with all available methods. In addition, China has long been hiding the presence of a nuclear weapons and delivery vehicles, which is why the old name “2 Artillery Corps”, designed to preserve the secrecy of the nuclear missile program, is no longer necessary.

During the December 31 ceremony, the Strategic Support Forces troops also received their flag. It is not completely clear what kind of troops were part of this new type of armed forces. There is no exact information on this score, which is why one has to rely only on fragmentary data and various estimates. According to some assumptions, the Space Forces, units for work in cyberspace and other structures whose task is to provide various assistance to other types of armed forces could be included in the Strategic Support Forces. Official Beijing is in no hurry to disclose the details of the creation of new troops.

11 January, the Chinese leadership announced the start of the transformation of the Central Military Council and related structures. It is assumed that all these changes will significantly improve the performance of army command and control systems. It is noteworthy that within the framework of the current reform, the structures that have existed since the 1930s will be changed or even eliminated. Thus, the Chinese leadership intends to modernize the PLA with all available methods, including sacrificing some of the old organizations.

The Central Military Council of the PRC is the main structure controlling the armed forces and the People’s Armed Police (internal troops). A characteristic feature of the existing control systems is the fact that all the basic functions are performed by the NAB, and the Ministry of Defense is responsible only for interaction with civilian structures and third countries. Thus, the current transformation will affect the most important control systems of the army.

Before the reform, under the direct control of the Central Military Council, there were four so-called. main management. These were the PLA General Headquarters, the Main Political Directorate, the General Directorate of Logistics (existing since the thirties), as well as the Main Directorate of Armaments and Military Equipment (created in the late nineties). Other organizations responsible for intelligence, educational work, etc. submitted to the head departments.

As a result of the new reform, only the CWS should remain from the control system that existed until recently, but its functions will be changed. It is planned that the subordination of the Council will now be 15 offices and departments, each of which will monitor certain aspects of the work of the armed forces. The Central Military Council itself in this case will carry out the overall coordination of their work and make major decisions.

According to reports, the functions of the General Staff of the PLA will be taken over by the new Joint Headquarters, whose task will be command and control, and the Directorate for the Development of Weapons and Equipment will take over from the Main Directorate of Arms and Military Equipment. In addition, the Department of Political Work, the Department of Logistics Support, the Department for the Mobilization of National Defense, the Commission on Science and Technology, the Commission for Discipline Inspection, the Political and Legal Commission and other structures will be created. The functions of the old Headquarters and other organizations that previously submitted to them will be distributed between them.

Some innovations will be used in the structure of direct command and control of troops. Thus, all branches of the armed forces are now subordinate to the United Headquarters. The General Staff was previously responsible not only for the general leadership of the troops, but also served as the headquarters of the ground forces. Now the headquarters of the ground forces is a separate structure and is also subordinate to the Joint Headquarters. The rocket troops that had previously subordinated directly to the Central Air Force, now, like other branches of the armed forces, will be controlled by the Joint Headquarters.

In recent years, China has been implementing numerous projects to upgrade the armed forces, most of which mainly concern the creation and production of weapons and equipment. In this case, over time, there is a need to update not only the material part, but also management structures. To date, this issue has been resolved, resulting in the emergence of a plan for the reform of the armed forces. Now the army and its associated structures have begun to implement new plans.

The goal of the current reforms is to optimize the control systems of the People’s Liberation Army of China, with which the country's leadership intends to build a modern, powerful army. For obvious reasons, the results of the changes are not yet determined. It will be possible to talk about the results and effectiveness of the reforms only in a few years, when the PLA will fully implement all the necessary changes and test new structures in practice.

Ctrl Enter
Noticed oshЫbku Highlight text and press. Ctrl + Enter
We are
PLA Navy Opportunities to Combat Carrier Strike Groups. Part 285 years of the People’s Liberation Army of China. What came to?
2 comments
Information
Dear reader, to leave comments on the publication, you must to register.