US withdraws Abrams tanks from Latvia

January 13 2016
302
The Pentagon decided that American Tanks Abrams are not the military equipment that can show its effectiveness “in the open spaces” of Latvia. The main US military department concluded that it would be more expedient to replace heavy tanks with less massive armored vehicles. Informational portal Delphi reports that today, on January 13, 2016, the rotation of the American military contingent in Latvia is being carried out, and at the same time tanks are being withdrawn Abrams Books. 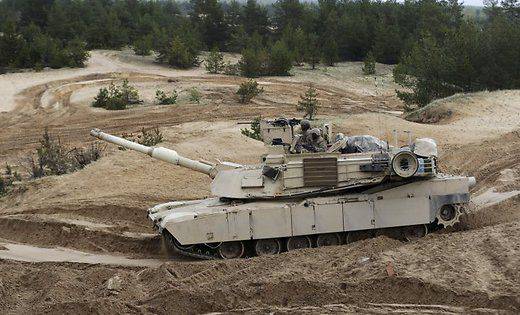 The Adazi military base is abandoned by the Abrams 8 and the Bradley 9 BTR. Tomorrow armored vehicles will arrive in Latvia instead. Stryker, as well as several SUVs Humwee. As reported in the American command, these machines "will be more efficient in Latvian conditions and require less costs for operation and maintenance."

At one time, the Latvian authorities asked American partners to leave tanks in the country on an ongoing basis, apparently not caring about what tasks the American Abrams will perform in the Latvian swamps ... In the Latvian segment of social networks, the withdrawal of American tanks was already called “the end of powerful advertising action ", which was called" Save Latvia from Russian aggression! "