January 13 2016
78
The chairman of the Liberal Democratic faction ALDE in the European Parliament, Guy Verhofstadt, proposed to give the Russian language official status in the European Union. This European politician said in an interview with a Belgian newspaper De Standaard. According to Verhofstadt, millions of Russian-speaking citizens live in EU countries, including Lithuania, Latvia, and Estonia.


Guy Verhofstadt:
For me, big Europe stretches from the Atlantic coast to the Volga. I am not only not against Russian and Russian. I love these people, this country. I made a proposal for the Russian language to be recognized as the official language of the EU, because in the Baltic countries alone there are millions of Russian-speaking people. 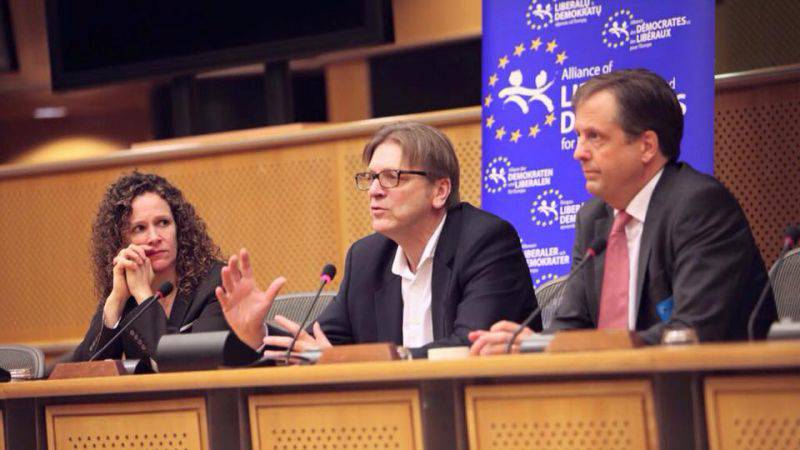 Guy Verhofstadt in the middle

Zile:
Guy Verhofstadt’s proposal to recognize Russian as the official language of the EU because there are a lot of Russian-speaking people in the Baltic States, I was very surprised. Because we in Estonia and Lithuania are faced with these problems that have arisen during stories and the occupation period. We know how to integrate and how to solve these problems. Guy Verhofstadt, please leave it to us. Better evaluate your achievements as the Belgian prime minister that you held for 10 years.

Latvian parliamentarian in his repertoire. And the repertoire fits into the expression "who's what, and the Latvian politician - about the occupation." Apparently, the main problem for Latvian and other Baltic politicians lies in the fact that it is irreversible occupied their brain, and it does not allow them to think constructively.

Ctrl Enter
Noticed oshЫbku Highlight text and press. Ctrl + Enter
We are
Happy Russian language!Wars with the Russian language
78 comments
Information
Dear reader, to leave comments on the publication, you must to register.