January 14 2016
18
Intolerance of Saudi Arabia to any religious and ideological dissent, not to mention the complete absence of democracy, may eventually overflow the patience of the United States, who consider themselves to be the guardian of the democratic values ​​of the entire planet. 2 January 2016 executed Shiite preacher Nimr Buckl an-Nimr in the Wahhabi kingdom. In addition to Sheikh Nimr, the Saudis executed 46 death sentences. The deadly intolerance of the Wahhabis to the "enemies of the faith" is a model of behavior fraught with international complications. The Americans, with their shale revolution, are no longer dependent on Saudi oil, their relations with Riyadh are in crisis for the second year, but with Iran, on the contrary, they are gradually improving. Will Washington continue its political and military support of Riyadh, which began in the seventies of the last century? 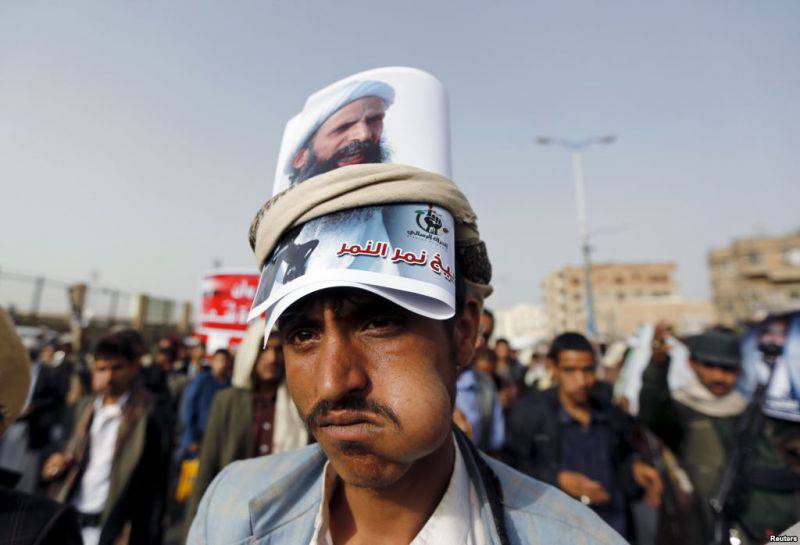 In eastern Saudi Arabia, dozens of Shiites held a protest against the execution of Shiite preacher Nimr Bakl al-Nimr. Demonstrators chanted slogans against the Sunni royal dynasty of Saud. The execution of an-Nimr caused outrage of all Shiites in the region, the radio notes "Freedom".

In addition to Sheikh Nimr, the Saudi Arabian authorities 2 January executed his nephew Ali Nimr and five more Saudi Shiites. In total, up to forty death sentences, including Sunnis, were carried out. All executed were accused of "terrorism" and "incitement to violence."

Many countries in the region condemned executions.

Yemeni Hussites called Nimr “the sacred warrior,” and his trial was “a farce and outright violation of human rights,” indicates Freedom.

According to Iraqi Prime Minister Nouri al-Maliki, execution means the end of the rule of the Saudi dynasty.

In Bahrain, there was a protest against the execution of Nimr, which the police dispersed with tear gas.

React and in Europe. In London, protests took place, noted "Vesti". EU High Representative for Foreign Affairs and Security Policy Federica Mogherini noted that the execution of An-Nimra can increase tensions between Sunni and Shiites, which has already brought a lot of damage to the Middle East.

But the most serious protests took place in Iran. "The Embassy of Saudi Arabia caught fire in one second," write the same "News." “Dozens of Molotov cocktails, and the diplomatic representation is already burning.”

The police had to use tear gas against demonstrators.

"On the night from 2 on 3 in January, the demonstrators staged a rally, and then attacked the Saudi embassy in Tehran and the kingdom’s consulate in Mashhad," wrote about this event "Russian Planet". - There is still no exact data on what happened in reality. According to media reports, the crowd threw "Molotov cocktails" at the embassy and allegedly crushed the interior. The guards could not restrain the onslaught of the demonstrators, but later the furious Shiites ousted from the territory of the embassy. Iranian police arrested 38 people who staged an attack on the embassy and consulate of the kingdom. ”

Riyadh, the resource indicates, did not report the victims and the extent of the pogrom, but responded to the attack of the diplomatic mission with a complaint to the UN Security Council. In addition, the kingdom announced the severance of diplomatic relations with Iran. Finally, on January 6, the Saudi air force attacked the capital of Yemen. In Tehran, they believe that the embassy of the republic was bombarded: several security guards of the diplomatic mission were injured.

Saudi Arabia, writes "Russian Planet", said it was ready to resume diplomatic relations with Iran, but under the condition: Tehran should not interfere in the affairs of the Arab states. In Iran, this demand was not answered. Instead of a reply, a statement was made by Ali Akbar Velayati, adviser to Ayatollah Khamenei. He stated that the “style of behavior” of Riyadh is reminiscent of the actions of “an angry person who has lost hope of finding a logical solution to his problems.” Then Velayati called the kingdom the main sponsor of global terrorism.

"The aggravation of relations between Saudi Arabia and Iran caused discontent in the United States," writes "Free press". - Only in the influential "The New York Times" a whole series of articles appeared with speaking headlines, such as: "Saudi Arabia is a burden, not a friend for the USA", "Saudi Arabia is no longer a convenient ally", "Alliance of the West with Saudi Arabia is the support of Islamism. ”

Can it happen that Washington will refuse to support its long-term partner - Riyadh?

“Americans will not give up their support for Saudi Arabia,” Sergei Samuylov, head of the US Foreign Policy Mechanisms Center for the Study of Foreign Policy Mechanisms of the United States and Canadian Studies Institute, told Free Press. - The publications in The New York Times are not made to “merge” Saudi Arabia. Most likely, one of the high-ranking officials hinted to some of the parties in Georgetown to correspondents that Washington was not happy with the Saudis. ”

Yes, Wahhabism is the official ideology of Saudi Arabia, there is a theocratic dictatorial regime in the kingdom, and the state supports radicals around the world, the expert recalled. However, American military bases are stationed in Saudi Arabia. “The assumption that the US will withdraw its bases from the country,” the expert noted, “is akin to science fiction. The quarrel between the Saudis and Iran cannot be a reason for such a step. ”

According to Samuilov, publications in The New York Times are a means of indirect pressure on Riyadh. “Obama agreed with Tehran,” the expert explained, “considers this to be his great success. The White House needs Saudi Arabia to somewhat lessen its position. ”

Riyadh will not increase the level of conflict, the expert believes. Saudis supply oil to the United States and the West in general. Washington has economic leverage, the Saudis understand this and will not go to the "holy war" of the Sunnis with the Shiites.

"Holy War" is fraught with major complications for the Saudis. And not only in a region where a weakly motivated royal army can eventually collide with Iranian fighters. Complications can also come from the Western world, which is very unhappy with the mass executions of Shiites. If Saudi Arabia had lost US support, regional rivals would have instantly taken the kingdom apart. Therefore, against the will of the "hegemon" Riyadh will never go.

Observed and commented on Oleg Chuvakin
- especially for topwar.ru
Ctrl Enter
Noticed oshЫbku Highlight text and press. Ctrl + Enter
We are
Saudi monarchy provokes war in the GulfIran in the Syrian conflict. The confrontation with Saudi Arabia and the interests of the Shiites
18 comments
Information
Dear reader, to leave comments on the publication, you must to register.