Project "ZZ". "People of the world", alignment with Obama!

January 13 2016
90
One of the events of the last days was the speech of Barack Obama before Congress, which showed that the ideas about “exclusivity” did not undergo any changes. Obama believes that the world sees its savior in the “strongest” and “best” America, and not in Russia at all. The Western press immediately picked up the theses of the owner of the White House. And now Putin has been called the “true enemy” of Russia, and the “people of the Kremlin” are “the most corrupt” in the country. Guarding their "interests" is the same inflexible Putin. In his strategy, the president of the United States is very simple: he is “right”, the others are “wrong.” And if so, all the criticism in his address comes from the "dark forces." Well, and in the appendage financial experts print: oil is about to fall in price to 20 dollars per barrel. 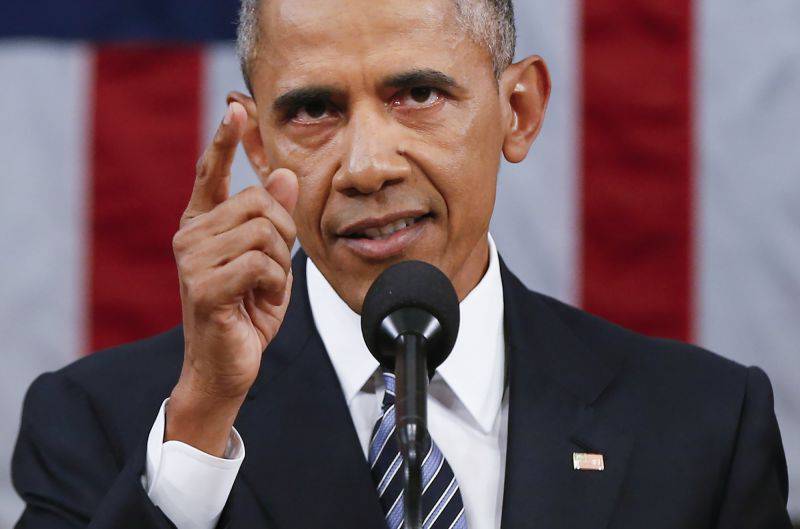 B. H. Obama: “When it comes to every major international problem, the people of the world do not look at Beijing or Moscow - they call us”

Speaking to Congress, Barack Obama spoke about the political and economic system of the world and the role of the United States in it. "When it comes to every major international problem, people of the world do not look at Beijing or Moscow - they call us," Obama quotes. "Lenta.ru".

Mr. President is convinced that the United States is the strongest state on the planet. The rationale for this thesis is military: “We spend more on our military than the next eight countries combined. Our troops are the best fighting forces in the world. stories».

Obama developed his idea by slightly boasting: “No country dares to attack us or our allies, because they know that this is the path to death. Studies show that our positions around the world are stronger than when I was elected to this position. ”

By the way, while Mr. President boasted of American "strength" and invincibility, one comrade hacker took and broke the network accounts of James Clapper himself - the director of the US National Intelligence. This was reported "Lenta.ru" with reference to the Associated Press. Details hacking office, of course, hides.

Lenta recalls that last October, the FBI and the US Secret Service launched an investigation into the activities of a schoolboy hacker who allegedly broke into the email of CIA head John Brennan and US national security secretary Jay Johnson. In addition, in November, the media wrote that hackers from the Crackas With Attitude team had access to the mail of FBI Deputy Director Marc Giuliano and his wife. Probably, the same hacker team that opened Brennan’s personal mail penetrated the FBI’s network infrastructure.

Apparently, let's add on our own, the schoolchildren who easily break the network structures of the FBI, the CIA or the National Intelligence itself are the very exception that "confirms" the rule about the "power" of the United States, voiced by Obama.

In support of the prominent speaker BH Obama, the American newspaper people rushed to chant the great America and stigmatize hostile Russia.

The most ardent brand reader turned out to be a journalist. "The Washington Times" Ted Bromund.

Life in Russia, the author of the article describes in black colors: oil prices have collapsed, the oil revenues of the budget are melting, paying the army becomes more difficult. And then there is another problem: the average life expectancy of men in Russia is lower than even among North Korean comrades. And the Kremlin is quite difficult to recruit soldiers for the army.

Yes, history has proven: the Russian people are able to withstand both the life and the bad leaders. However, there are limits to everything. Putin and “his hot-water bottle for the throne and the puppet” (in the original “his place-holding puppet”) Medvedev, the author writes, have ruled the country since 1999. And they hardly managed to solve the Russian problems. Moreover, Putin and “his henchmen” only worsened the situation, the American publicist is sure. Putin's mouthpiece, RT, speaks of corruption as one of the main threats to Russia. But this is ridiculous, since “the most corrupt people in Russia sit in the Kremlin” (“But in the Kremlin”).

The theme of "Putin's world" was continued by German journalists.

Reinhard Fezer in the newspaper "Frankfurter Allgemeine" talks about the logic of Putin.

“According to Vladimir Putin, the world is simple and transparent: he is right, everyone else is wrong,” writes the journalist. And if so, the "criticism" of Putin's policy is the work of exclusively "dark forces" ("... das Werk dunkler Mächte").

Who are these forces? Putin described them in a recent interview with the newspaper “Bild”, trying to explain the unfavorable West to his own person. According to Putin, the German press is experiencing "significant foreign influence ... from across the Atlantic Ocean."

Feather believes that Putin’s claims are not worth a jigger. After all, if it were as the Russian president says, then how can one explain that “the majority of German publications” subject the United States to “sharp criticism”? Specifically, the German media focus on the death penalty in the United States, the war in Iraq, the Guantanamo prison, the activities of the NSA, police violence against blacks, etc. If you know all this, you will have to admit: agents for the Atlantic have a great "hack".

"Putin's interests," as is clear from the headline, the reporter declared the interests of the "corrupt elite." According to Yulia Smirnova, “the world of the Russian president,” as he himself describes it, is “the world of the champion of justice.” In a recent interview with the Bild newspaper, Putin spoke about the protection of Russia's national interests. But does he protect them? According to Smirnov, the "annexation of the Crimea", the secret "military aggression in Eastern Ukraine," and then the sanctions in any way "do not meet the interests of the population" of Russia. However, the growth of the “militarization of society”, spending “for the needs of the army”, which reduce the cost of education and medicine, cannot be called appropriate. And is powerlessness and corruption really useful for Russians?

Whose interests are Putin taking care of? The journalist knows: “authoritarianism and fear of the West” is useful for the “ruling elite” surrounding Putin. Her goal is simple: to remain in power "at any cost."

Frederick Schmidt in "Frankfurter Allgemeine" notes that Russia is slipping down "with a couple of Putin."

Putin has been in power for the seventeenth year, the columnist writes. And what do we see in Russia? Signs of recession and increased repression.

The recent speeches of President Putin, the author believes, have shown that he has no ideas about how to overcome the crisis (if, of course, forget about the hopes of rising oil prices).

Putin’s fantastic ratings are made up of constant reminders of the Kremlin about “enemies” who have surrounded Russia or want “evil” to it. The Kremlin controls the media and eliminates the influence of the opposition.

The last nail in the lid of the coffin of Russia was scored by analysts from Morgan Stanley. They voiced the forecast that oil prices could fall to twenty dollars per barrel. Writes about this influential newspaper Financial Times.

“Probably, the price of oil will be from 20 to 30 dollars,” says company analyst A. Longson.

Following Morgan Stanley, Société Générale also lowered its forecast figures. Analysts believe that the reason for the fall in oil prices will be the resumption of production by Iran and the preservation of the previous level of production by the United States. The sharp decline in China’s economic performance was also taken into account.

Speeches by Barack Obama, apparently, have become a tradition for journalists of the largest media. As soon as the hegemon of this world voices yet another thesis about the greatness of the United States and Russia's weakness, newspapermen have a reason to criticize the Kremlin and designate Putin as the “enemy” of the unfortunate Russian people. The speech of the President of the United States becomes a kind of social order.

On the other hand, it is impossible not to recognize the Russian economy as weak and significantly dependent on world market conditions. As soon as oil prices fall, as economic indicators collapse, the budget goes to the bottom, the inflation spiral unwinds. And if the “global community” imposes sanctions, the indicators fall even faster.

Russia’s long-term resource orientation towards the West led to a weakening of the economy. It was begun, however, not by Putin, but also by the Soviet general secretaries — the aging Brezhnev and then Andropov. However, under Yeltsin and especially under Putin, Russia's monetary and raw materials dependence increased; To deny it is meaningless, just look through the statistics. RF Export of Crude Oil to 2000 was 144,4 mln. Tons, in 2014 year - 223,4 mln. Tons (from this amount to foreign countries - 199,3 mln. Tons).

Of course, with such rapidly growing volumes of trade in raw materials, the prices for which have always fluctuated greatly, over the past years, Russia's dependence on world markets has grown, and at the same time dependence on the West, the first buyer of Russian raw materials. And as long as our state does not dismount from the oil and gas “needles”, there is nothing to think about a self-sufficient economy. By the way, oil and gas are non-renewable resources.