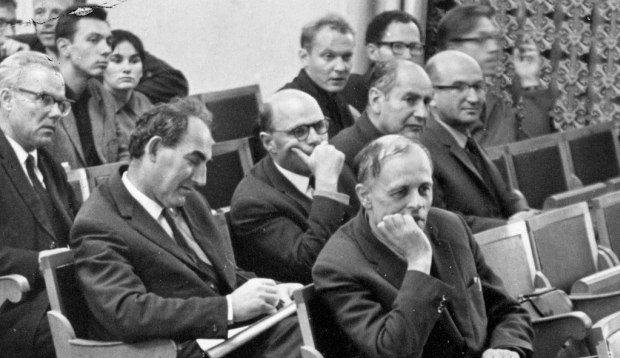 The most common solution to common technical problems is to find the most effective combination of already known elements. The creation of a thermonuclear bomb was based on the study of completely hitherto unknown processes.

One of the direct participants in the project was a member of the FIAN, RAS Corresponding Member Vladimir Ivanovich Ritus — in the journal Uspekhi Fizicheskikh Nauk published his review of the tasks in which he had to participate. We offer you some excerpts from this review.

In 1948, the Institute was headed by I.E. Tamm a group of theorists, which was entrusted by a special government decree to engage in the study of thermonuclear detonation of tritium plasma. The group I.E. Tamm entered A.D. Sakharov, V.L. Ginzburg, S.Z. Belenky and Yu.A. Romanov. IN AND. Ritus appeared in this group in May 1951 after graduating from the Physics Department of Moscow State University and from unexpected posting from the graduate school. IN AND. Ritus writes that this was a very sharp turn in fate.

The creation of a hydrogen bomb involves, above all, the use of the nuclear energy of a heavy isotope of hydrogen — deuterium. When heating deuterium nuclear bomb to a very high temperature of the order of keV 10 (1 eV = 1,16 104 × degrees Kelvin, multiplied by a constant k = Boltzmann × 1.38 10-16 erg deg-1) between the deuterium nuclei - deuterons - thermonuclear reactions occur

reaching with a markedly higher energy release. This is due to the very strong nucleon coupling (2p + 2n) in the nucleus of He4 - the main isotope of helium. Accounting for secondary reactions leads to the fact that the total energy release during the combustion of 1kg deuterium increases in 4 times.

Such are the “first” and “second” physical ideas (in the terminology of A.D. Sakharov) incorporated in the first version of the Soviet thermonuclear weapons.

The main occupation of V.I. Ritus and his colleagues Yu.A. Romanov, there was a detailed study of the “second idea” - the idea of ​​using Li6D. They wondered how the energy release would increase if a certain amount of deuterium was replaced by tritium, since the cross section of the dt reaction is 100 times the cross section of the dd reaction. Or what happens if natural Li, containing 7,3% Li6, is not completely purified from the main, seventh isotope, so that the concentration of Li6D becomes comparable to the concentration of Li7D. They were engaged in the corresponding calculations of energy release.

Vladimir Ivanovich recalls his participation in a meeting on this topic:
“Around the end of 1951. in the office of Yu.B. Khariton there was a meeting with the participation of I.V. Kurchatov, dedicated to the problem Li6D. Among the invited chiefs of laboratories and departments of KB-11, Yura and I were the youngest people. It was here that I first saw I.V. Kurchatov, who came with his retinue. Immediately began to spread his nickname Beard. True, his beard did not make a proper impression on me - it was very thin. However, his beautiful, intelligent face, tall stature and lack of intonation of the big boss remained in his memory.

Of course, Andrei Dmitrievich sent us to this meeting, since Romanov and I were closely involved in the Li6D problem, but all our results were A.D. he reported. The hall was full, everyone was sitting, forming a semicircle, but the space in the center and behind the chairs remained free. Kurchatov walked alone through this free space. At first Khariton reported to him, then Sakharov. And, in particular, there was such a scene. Kurchatov stopped behind my chair and, leaning against his back, began to talk about something too. His beard began to touch my then-available hair. It seemed to me that everyone was looking at me, and I did not know where to go. "

At the beginning of 1953. in KB-11, preparations began for the test of RDS-6. At a very representative meeting of theoretical physicists and experimenters A.D. Sakharov told about the main tasks that had to be solved during the test.

First of all, it was necessary to establish the magnitude of the explosion energy, the reliability and progress of the thermonuclear reaction. For this purpose it was intended to measure:
- time from the moment of initiation to the beginning of the reaction in the product;
- γ-ray and 14-MeV-neutron fluxes, the record of which allows to judge the course of the reaction in the product for one hundred millionth of a second;
- pressure and velocity of the shock wave;
- flow of γ-quanta from a radioactive cloud.

Vladimir Ivanovich was instructed to associate the total energy release with the total flux of 14-MeV neutrons detected by fluorine detectors using the reaction F19 + n → 2n + F18 with the 11 threshold MeV. Several detectors at different distances from the center of the explosion were supposed to register the β + radioactivity of fluorine-18 with a decay half-period of 112 minutes.

Measurements 12 August 1953g. have shown that 6,3 × 1024 neutrons produced with energies above 11 MeV came out of the explosion. This number was in good agreement with the expected total number of fast neutrons produced in the thermonuclear reaction of a multilayer charge with a power of 300 - 400 kilotons of TNT.

The energy release of the “puff” tested by 12 in August of 1953 was so large - 400 kilotons - due to a larger, than calculated, real cross section of the dt reaction and the use of tritium not only in the first, but also in the second light layer . It was the brilliant success of the Tamm group. I.E. Tamm and A.D. Sakharov became the Heroes of Socialist Labor, received very large Stalin awards, cottages and cars.

Ctrl Enter
Noticed oshЫbku Highlight text and press. Ctrl + Enter
We are
100 anniversary of the birth of Nobel laureate in physics Vitaly GinzburgRed commanders on the Alley of Mig
7 comments
Information
Dear reader, to leave comments on the publication, you must to register.