January 17 2016
41
Mass domestic soldiers rather short история, about a hundred years before the revolution, domestic production was practically absent. Soldiers in those days, domestic handicraftsmen made of wood, and tin were supplied from abroad (Germany and Austria-Hungary), they were available only to the nobility. They let out paper ones, with which, as we know for certain, even little Volodya Ulyanov played ... 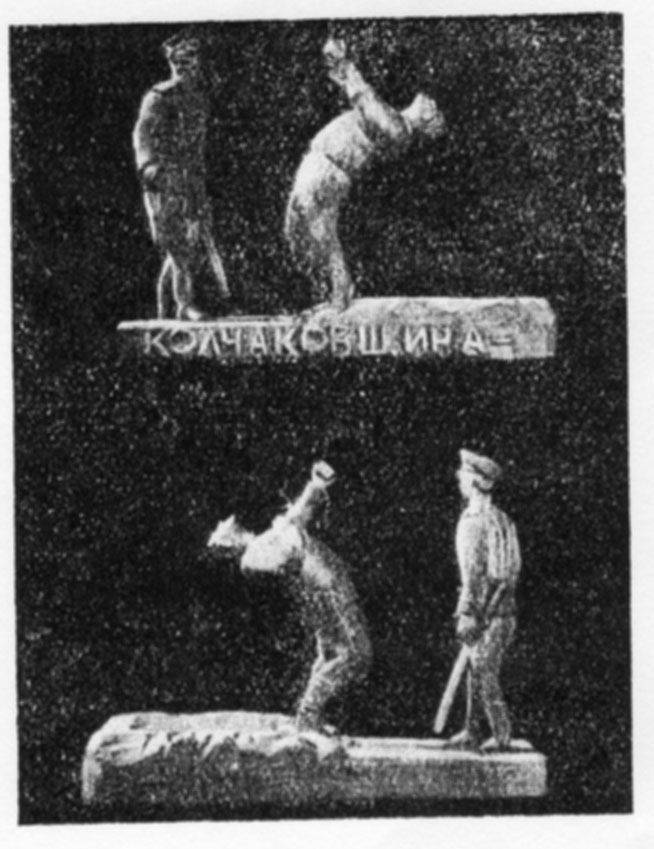 "Kolchak". 1920's
Although there was no idea in all these soldiers, they were “puppets for boys”. The enemy looked neutral - the same figure, just a uniform of a different color.

Under Soviet rule, ideological motifs appeared in the very first handicraft soldiers. The enemy was portrayed, he was recognizable, he was portrayed quite toughly - for example, Kolchak's officer shooting the peasants, or caricatured - in the form of a big-bellied bourgeoisie in a cylinder.

These were crafts of handicraftsmen and small private artels, the state was engaged first in overcoming the devastation, and then in the industrialization of the country - there was no time for toys, in particular, not for soldiers.

However, in the middle of the 1930-s, the soldiers became a truly state affair. The political leadership fully appreciated the role of the toy in educating not just a Soviet person, but a patriot, a future defender of the Motherland.

Issues of release of domestic soldiers were covered not only in the profile journal “Toys”, even the “Izvestia” of the Central Executive Committee of the USSR wrote about this.
In the journal "Toy" the list of authors was not just "star"! In addition to the all-Union famous heroes such as Valery Chkalov and Marina Raskova, the marshals Budyonny and Voroshilov acted as authors of articles about soldiers and military toys, and the articles of colonels and majors were published from number to number.

It is noteworthy that the authors paid great importance not only to the release of a military toy, but made demands on it as a practical guide, teaching, for example, the basics of artillery crew actions.

The military criticized the soldiers from the point of view of the credibility of the image of the soldier’s official duties, paid attention to the smallest, minor details, such as an extra stick at the big regimental drum, hurried the production workers.

From the end of the 1930-s, the soldiers of the Fine Arts from the factory of Gorky Park began to produce millions of copies. All this attention to the release of mass soldiers was not in vain - they turned out to be one of the bricks of our Victory.

When the war broke out, young soldiers and lieutenants, imagining themselves heroes in boyish games, became brave warriors, real patriots, inflexible defenders of their socialist fatherland ... 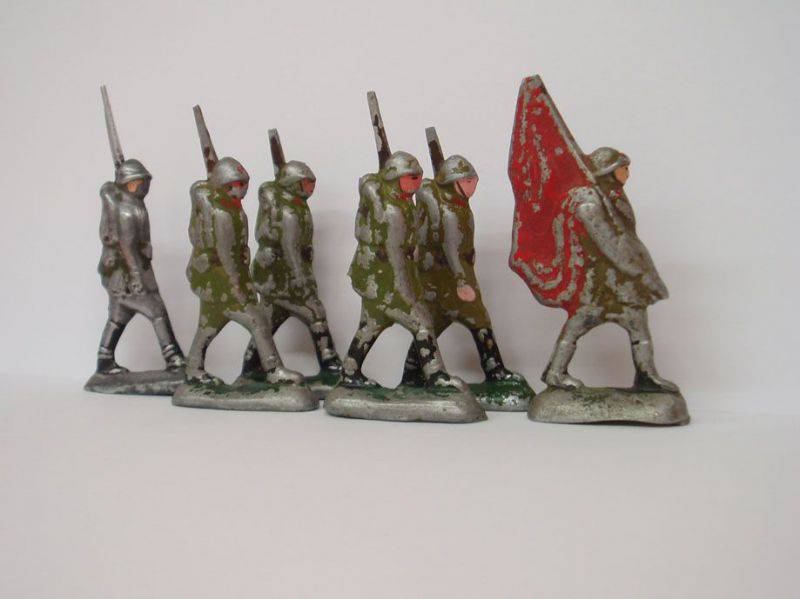 Soldiers from the Factory Gorky Park. End of 1930's
It was she who was Soviet youth, brought up on the books of Gaidar, who had played ideologically verified soldiers in her childhood, carried the brunt of the war on her young shoulders and paid for the Victory with her lives.

Search engines often “lift” out of the trenches, from rotten gymnasts and overcoats of old, oxidized 1930 aluminum soldiers — many soldiers and commanders took them with them. Perhaps they learned this tradition from Gaidar’s book The Commandant of the Snow Fort, where a boy gave a soldier to a Red Army soldier who was leaving for the Soviet-Finnish war, someone took to remember his children ...

Soviet pre-war soldiers fully fulfilled their mission and went to history. After the war, when the country rose from the ruins, healed wounds and built a new life, the production of soldiers was not subjected to strict ideological control - there were enough examples for military-patriotic education. They surrounded children at home, on the street, at school.

Soldiers, while remaining indispensable participants in boy games, were, as a rule, repetitions of their glorious pre-war predecessors. 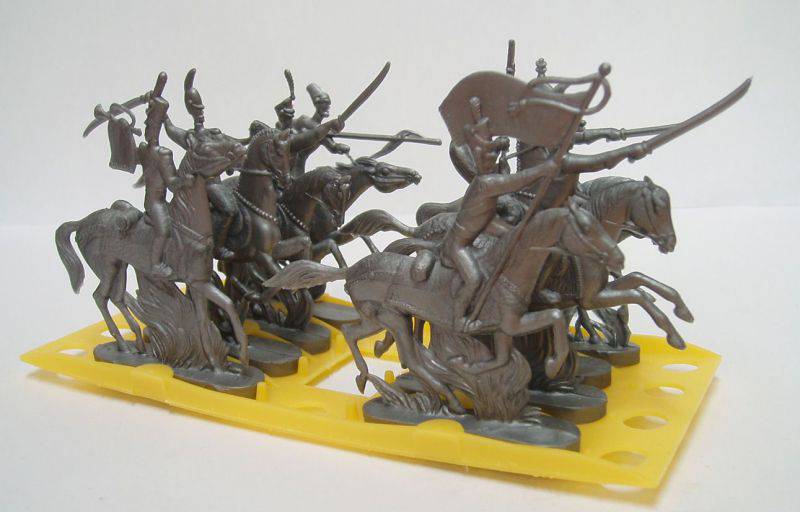 Set "Horsemen 1812 of the Year." 1970 – 1980's
By the beginning of the 1960s, a tendency began to take shape, reflected in the minutes of meetings of artistic councils on the approval of toys that Soviet children do not need automatic machines, Tanks and soldiers, their education should take place exclusively in a peaceful manner ...

Fortunately, this trend did not last long, and the period in which Leonid Ilyich Brezhnev was in power, which unfairly is still sometimes called “stagnation,” became the truly “golden age” of Soviet soldiers.

Tachanka. 1970 – 1980's
More than twenty different sets were released for different periods of not only Soviet, but also Russian history:

“Russian Warriors”, “Ice Battle”, “Glory to the Russian arms"," 1812 Cavalry of the Year "," Red Cavalry "," Chapaevtsy "," The Sailors of October "," Soldiers of the Revolution "," Our Army ", etc. In general, from the middle of the 1960's to the middle of the 1980's, more types and circulations of soldiers descended from the conveyor than in the entire previous Soviet history, and in the entire history of our country ...

In the middle of 1980, in the years of “perestroika”, when with the emergence of cooperatives, the possibility of releasing soldiers without state participation arose, several enthusiastic soldiery tried to launch new sets, but this was prevented by their lack of entrepreneurial experience. The western 1970 – 1980-s sets were copied, and state-owned enterprises continued to produce their old designs.

At the same time, a real war began against the Soviet military toy, headed by the chief editor of the magazine Ogonek, an unkind memory - Vitaly Korotch. He invented the "Day of the destruction of military toys." 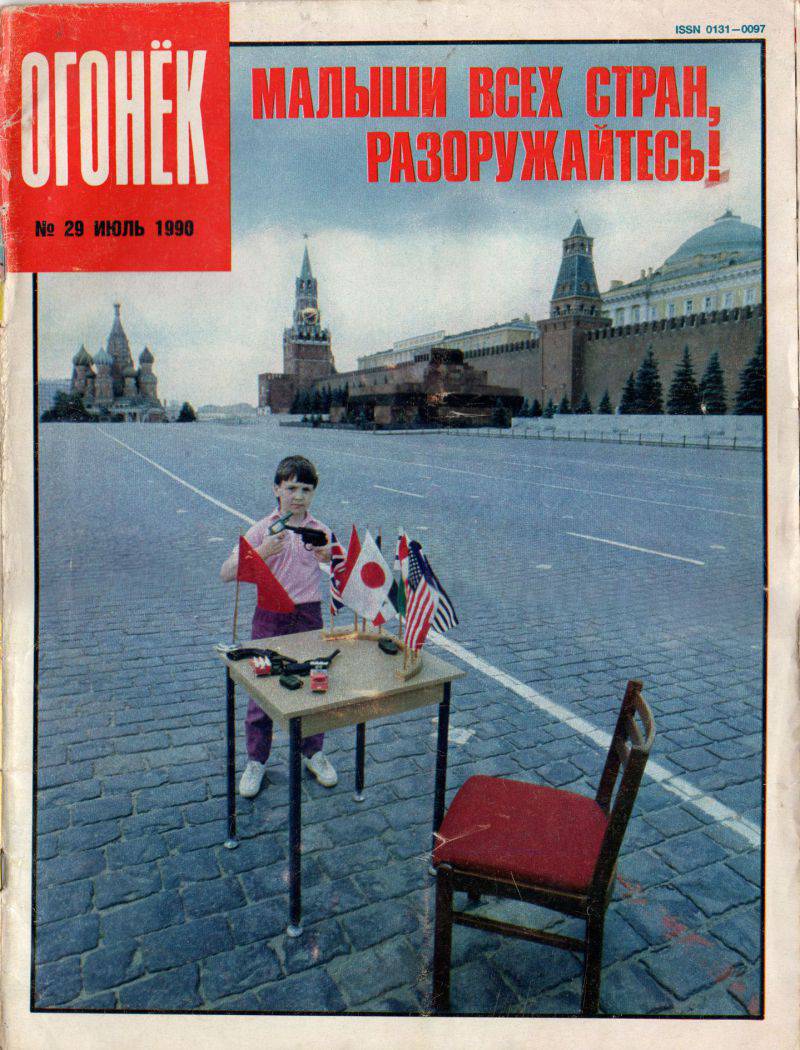 Cover of the magazine "Spark". 1990 year
Unfortunately, his initiative was picked up by the magazine Murzilka. A competition among children was announced - who will surrender more Soviet military toys for their subsequent destruction. This bacchanalia took place against the background of the loss by the Soviet Union of its position as a world power, which ended in the collapse of a great country.

After that, the “upbringing” of the younger generation was undertaken by Chinese and American manufacturers. The first flooded the country with cheap plastic warriors depicting the American army, the second began to introduce the cult of all kinds of devilry - spidermen and all the fantastic evil, which has taken root and remains on the shelves of shops and today.

Unfortunately, some domestic manufacturers have succumbed to this temptation. So, one of the companies along with all sorts of "cyberpunk-amazons", "cave trolls", ninjas and samurai released a completely flagrant set of "Arrow - Shootout".

The heroes of this, if I may say so, toys were monstrous figures depicting gangsters and the same brutish policemen.

What could these soldiers teach? Who bring up? In the 2004 year, when, unexpectedly for myself, I began to produce toy soldiers, all these thoughts did not occur to me, and they could not come. I just wanted to make normal toy soldiers, whom I played in my childhood, I wanted to make such figures, which I lacked then, which I dreamed of.

No most important tasks stood before me. But from year to year, plunging deeper and deeper into the subject, I began to understand how important the soldiers are for the child, for his upbringing a real patriot, a man who is ready to defend himself, his family, his country. 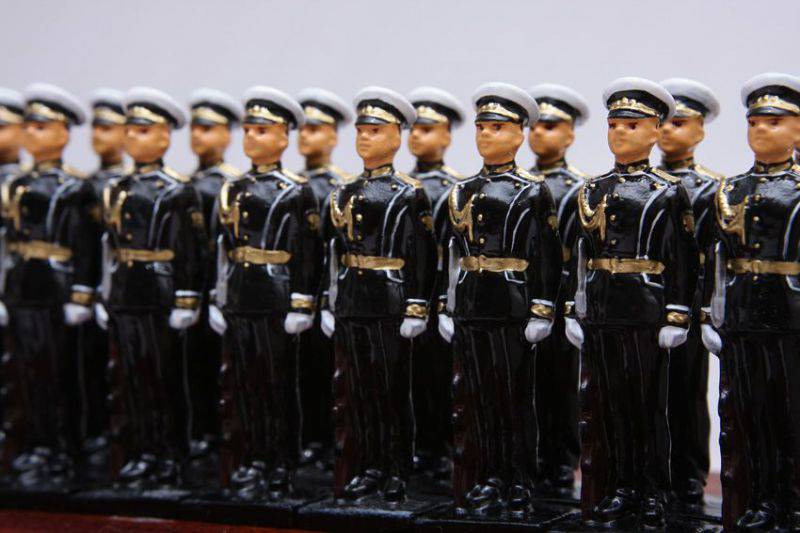 At first, our company dealt only with historical themes that our Soviet predecessors did not fully disclose, without at all touching the realities of the modern army and, all the more, the events of modern history.

But life itself made us turn to the topic of modern military conflicts - too fundamentally, too uncompromisingly, confronting Russia with today's challenges, and we must reflect it so that children have clear guidelines before their eyes, to distinguish good from evil.
Until recently, the “heroes” of the modern history of Russia were gangsters and prostitutes, children of oligarchs and thieves who despise labor, pop culture figures of the lowest degree ... 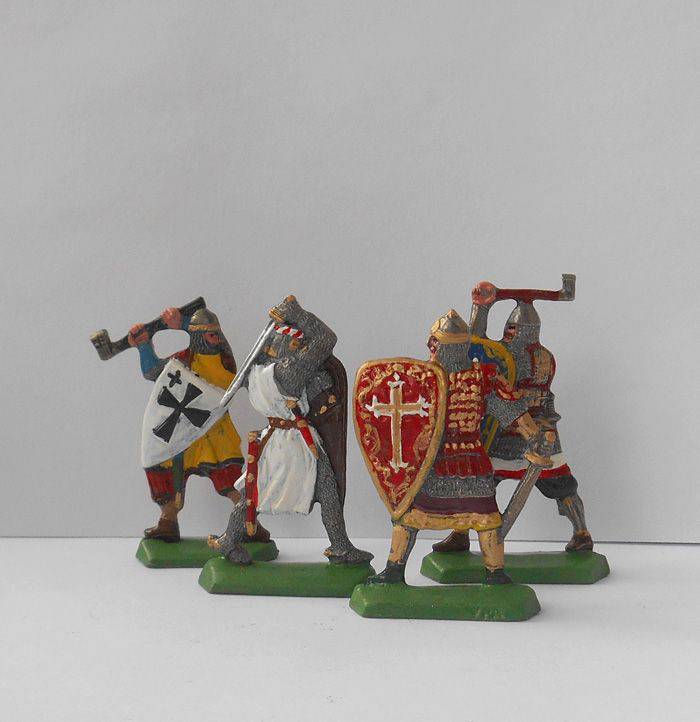 "Hooray!". Battle on the Ice. 2013 year
Therefore, when in 2014, we saw real heroes - “polite people”, the militia of Novorossia, who took up arms to protect their land from neo-fascists, this required immediate implementation.

Even more surprised by the reaction of buyers to these soldiers. These figures became necessary for those who had never before bought soldiers or their children, much less themselves. Thus, people identified themselves with modern events, they wanted to somehow be part of the real heroes of our time.

Now we see our task not only to fully reflect in the soldiers the history of Russia's military glory, but also to pay tribute to current events, to show not only the after-death, but also the lifetime glory of real heroes. 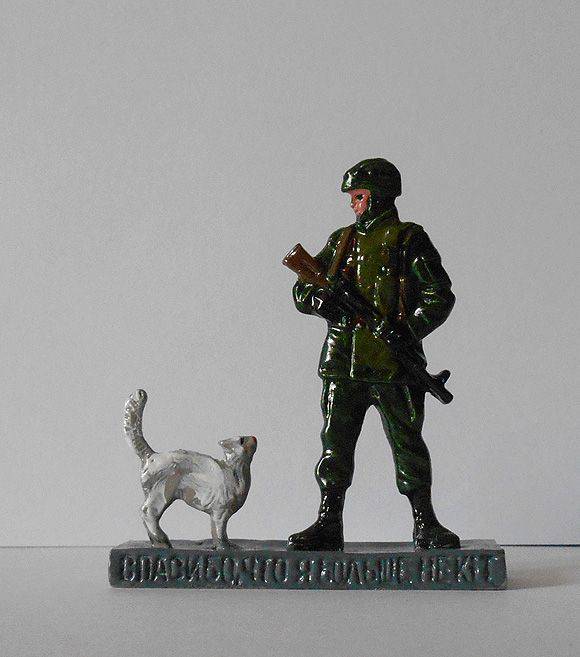 "Hooray!". "Thank you, I am no longer a kit." 2014 year
Now the state does not pay due attention to such a powerful educational tool as soldiers and military toys, although in 2011, at a meeting of the Book Chamber, in his speech, Russian President Vladimir Putin said bitterly: “We don’t even release soldiers” ... 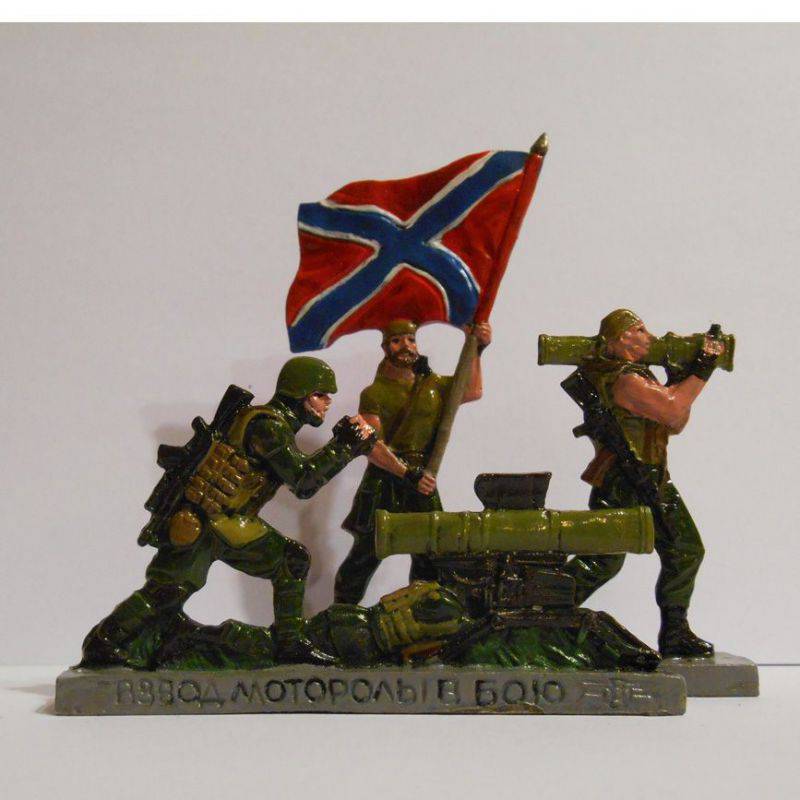 "Hooray!". Soldiers of New Russia. 2014 year
From time to time, this topic is raised by Dmitry Rogozin, Vladimir Zhirinovsky, who offered to set up the release of vanek-vanek as a symbol of the Russian soldier ... Unfortunately, it did not go further than good wishes about the release of military toys. But, in my deep conviction, none of the citizens of Russia should wait for help from the state, but help him himself. In my opinion, this is our duty.

Being citizens of a great country, we must bear the burden and difficulties of this burden on a par with it - it has been like this in Russia at all times, and it will be so. It is necessary not to lament, but to work. There is a battle for minds and souls, a battle for history, which the supporters of the unipolar world and their followers are shamelessly trying to distort in their favor. 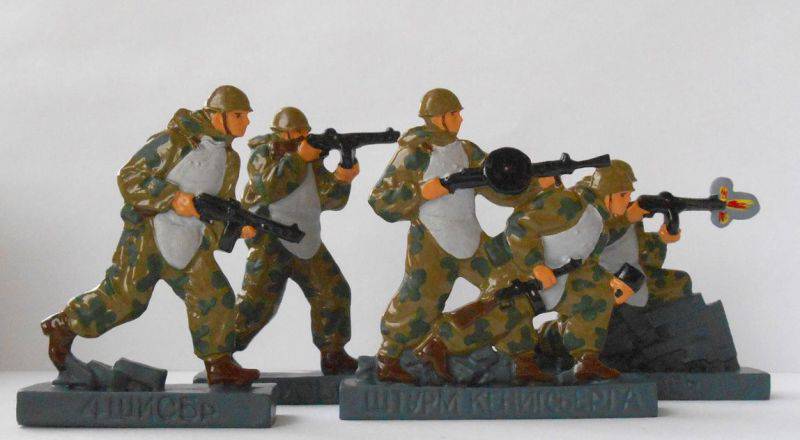 "Hooray!". Sturm Konigsberg. 2015 year
Our task is to materialize our past, to embody the images of our heroic ancestors and contemporaries in metal, so that current and future generations are proud of their homeland and are always ready to defend it.

Ctrl Enter
Noticed oshЫbku Highlight text and press. Ctrl + Enter
We are
The destruction of the Austro-Hungarian Empire did not bring Central Europe peaceThe defeat of Austria-Hungary in the 1914 Serbian campaign of the year. Battles on the river. To the nucleus and at the Mine
Military Reviewin Yandex News
Military Reviewin Google News
41 comment
Information
Dear reader, to leave comments on the publication, you must to register.