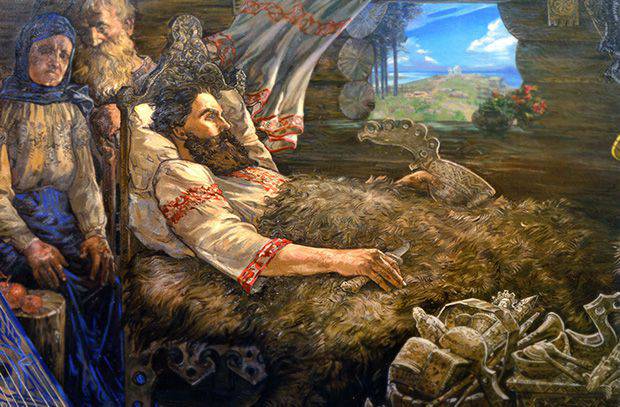 As one epic hero defended the Russian land for several centuries in a row
1 January The Orthodox Church celebrates the Day of Remembrance of St. Ilya Pechersky, who became the prototype of the epic hero Ilya of Murom. They searched and found traces of a strong monk, who was revered as a defender of the Russian land, and understood the “Russian Planet”.

In the footsteps of the legendary hero

Historians have tried to find traces of the legendary hero in the annals, geographical names, tales of other nations and the tales of overseas travelers. The memory of Ilya Muromets as a real historical character has outgrown his time and passed through several centuries, bringing together people's ideas about the ideal defender of the Russian land.

In the prototypes of the epic hero, the researchers recorded a variety of characters: starting from the chronicler hero Rogdai, the warrior Oleg Moravsky and ending with the impostor Ilya (Eleyka) Korovin, who declared himself Peter the Great and was subsequently executed. For a long time, it was considered that Illya from the city of Murom is a generalized image based on no specific historical character.

It is believed that for the first time Ilya Muromets was mentioned in 1574 in a letter from the headman of the town of Orsha Philo of Chernobyl. He wrote about the epic warrior "Ilya Muravlenin" as a defender of the Russian lands and about other warriors who are so lacking in this difficult time.

Stories about Ilya Muromets are found not only in Russia, but also among European peoples. In the ancient Germanic epic, he appears as Ilya Russky, a mighty and invincible warrior. In the Scandinavian sagas, Ilya turned into Ilias. Overseas ethnographers who came to Russia also collected stories known to every Russian boy. A Polish merchant from Lviv, Martin Gruneweg, after returning from Kiev in 1584, wrote that he saw the grave of the legendary hero. Erich Lassota von Steblau, an Austrian traveler and diplomat, also mentioned in the 1594 year the giant Ilya Morovlin and his grave. These testimonies indicated to historians the most likely burial place of the hero.

One of the monks of the monastery, Athanasius Kalnofsky, published in 1638 the lives of the saints of the monastery. Among them is Ilya Muromets, or Ilya Pechersky, who, according to a monk, lived 450 years before that time. It is with this real historical character, as many researchers believe, that the image of the legendary hero is associated. It is not by chance that in all the epics Ilya Muromets appears as a defender of the people of the Russian and Orthodox faith. For example, the money taken from the robbers, he gave to the construction of temples. 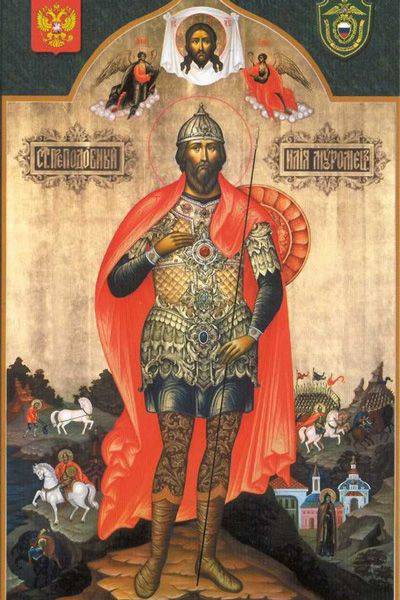 Ilya Pechersky (Ilya Muromets). Photo: vladimirobl.ru
It is believed that Ilya took monasticism closer to the end of his life, after military exploits in the squad of Prince Vladimir the Red Sun (also an epic character, who had, however, a more specific historical prototype - Vladimir the Baptist). However, church legends carry the life of Ilya Muromets from the 11th century to the 12th century. None of the subsequent ecclesiastical historians made up the life of Elijah - perhaps this was because during the monastic period Ilya did not have time to accomplish special feats of faith, as he took the veil shortly before his death. However, epics about the national hero, carefully passed from mouth to mouth, managed to preserve much more details about his life than many written sources.

In the Soviet years, Ilya Muromets tried to “de-Christianize” with all his might. So, for example, in the pre-revolutionary editions of the epic epic, Ilya rose to his feet after meeting Christ and the apostles, who later turned into nameless old men - kalik. However, it was precisely in Soviet times that the final point was reached in the search for the historical prototype of Ilya Muromets. Studies conducted in 1988 by a special commission confirm: a monk from the Kiev-Pechersk Lavra and an epic character appear to be one and the same person.

Scientists have found that the monk, whose relics are located in the Kiev-Pechersk Lavra, lived in the XI – XII century, his age - 40-55 years - fully corresponds to the epic description. The biggest surprise awaited scientists in the study of the musculoskeletal system. Bone deformities, which are formed as a result of paralysis of extremities in youth, were discovered. The body of the monk also bore the marks of numerous battles, and he died from an extensive wound in his heart. Perhaps this happened during the Polovtsy raid on the Kiev-Pechersk Lavra.

One of the heroes

Volodymyr Propp, a prominent specialist in folklore, wrote: “The epic stories about Illya Muromets are a reflection of all the eras passed by the Russian people: crowding out paganism by Christianity, fighting the Tatars, injustice and greed on the part of the boyars and the grand prince (king) of the emerging centralized state, the Time of Troubles and popular uprisings ... We will not be able to guess all the historical heroes and antiheroes, whose actions pushed the people to create epics, everyone who became the prototype of the characters of the works about the "epic time" of the Russian people. "

But this means that the Monk Ilya Pechersky, Oleg Moravsky, Rogday and even Elika Muromets are only some of the number of folk heroes who were embodied in the same image from century to century. Therefore, there will be enough warriors for our time.