“... How happy I am that not abroad, but in Russia a new means of communication has been opened” 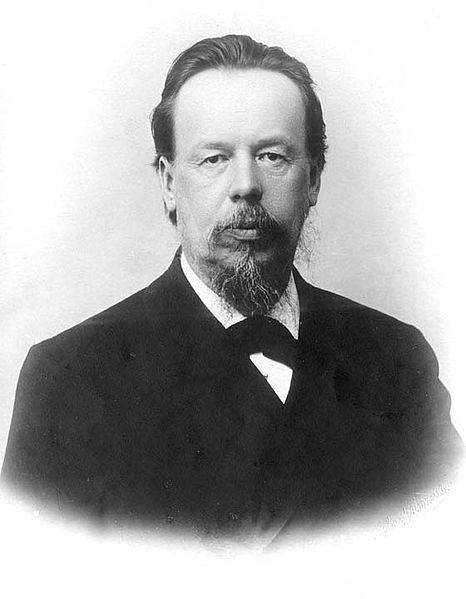 110 years ago, 13 January 1906, the great Russian scientist, radio inventor Alexander Stepanovich Popov passed away. The name of A.S. Popov is inscribed in gold letters in history Russian and world science. The result of his many years of experience in the field of radio communications was the creation of the world's first radio receiver in 1895. True, Popov’s priority in this area is disputed in the West, where his name is almost forgotten, and other scientists, G. Marconi, O. Lodge, and N. Tesla are considered to be the creators of the radio.


Alexander Stepanovich Popov was born 4 (16) in March 1859, in the village of Turyinsky Rudniki (now Krasnoturyinsk, Sverdlovsk region). In the family of his father, the local priest Stepan Petrovich Popov (1827 — 1897), and his mother, Anna Stefanovna, besides Alexander there were also 6 children. At 10, Alexander Popov was sent to the Dalmatovo Theological School, in which his older brother Raphael taught Latin. There he studied from 1869 to 1871 years. In 1871, Alexander Popov was transferred to the third class of the Yekaterinburg Theological School. At that time his elder sister Maria Stepanovna lived with her family in Yekaterinburg. Her husband, the priest Ignatius Levitsky, was a very wealthy man. After graduating from a religious school, in 1873, Alexander entered the Perm Theological Seminary.

After graduating from general education classes at the Perm Theological Seminary (1877 year), Alexander successfully passed the entrance exams to the Physics and Mathematics Faculty of St. Petersburg University. After graduating from the Faculty of Mathematics and Physics of St. Petersburg University in 1882, he was engaged in research activities and taught physics and electrical engineering at a number of technical schools. In 1901, he became a professor of physics, and in 1905, he became rector of the St. Petersburg Electrotechnical Institute.

The scientific interests of Popov lay in the field of electrodynamics. The scientist set a goal to design a wireless alarm system for use on navy based on electromagnetic waves. At the first stage, Popov found a sensitive indicator of electromagnetic waves - he became the radio conductor E. Branly. At the second stage of the experiment, Popov created the radio directly. By the spring of 1895, a reliable and sensitive device was ready. At a meeting of the physical department of the Russian Physicochemical Society on April 25 (May 7), 1895, Popov presented a scientific report on the invention of wireless communications and demonstrated its work. In memory of this event since May 1945, Radio Day is celebrated in Russia on May 7. Improving the transmitting and receiving devices, the Russian scientist achieved a signal transmission range of 150 km. Popov also studied x-rays and made the first in Russia x-ray images of objects and parts of the human body.

In the USSR, Popov’s priority in the invention of radio was generally recognized, while in other countries this merit is attributed to the Italian Guglielmo Marconi or Nikola Tesla. After the collapse of the USSR, this point of view found supporters in the domestic media. The authors of several articles and TV programs claim that the Russian scientist did not invent anything. They say there are no documents, no testimony from contemporaries, who say that his receiver appeared before June 1896, when Marconi submitted to the British Patent Office an application for the wireless telegraph he had invented. In addition, it was suggested that Popov created a “half-finished product” of a radio receiver, which actually did not work, and Marconi brought it to mind and made the new device widely available. According to another version, Popov had found out somewhere about Marconi’s invention and was simply trying to repeat it - without much success, however. As a result, the opinion is being promoted that the glory of Popov was created only under Stalin, when Soviet agitators sought to “prescribe” all epoch-making inventions of humanity in Russia.

In reality, Popov’s priority in the invention of radio is based on several facts. 25 April (7 May) 1895, the scientist spoke about the device he created at a meeting of the Russian Physico-Chemical Society. Unfortunately, neither the transcript of the meeting, nor the feedback from its participants, nor the article in the Kronstadt Gazette newspaper on the subject matter of the device. The provision was corrected by an article by Popov in the Vestnik RFHO, which was published in January 1896 of the year: it contained the device circuit for transmitting and receiving radio signals. 12 March in the same RFHO, Popov demonstrated a transmission over a distance of about two hundred meters of a radiogram with the words "Heinrich Hertz". And Marconi only 2 June filed in London an application for his radio. Moreover, in this application, contrary to common practice, there were no diagrams and drawings of the device. They appeared only in March 1897 of the year, and strikingly resembled the scheme of the receiver Popov. That is, it is possible that it was Marconi who repeated the invention of the Russian scientist.

Guglielmo Marconi was barely 22 at that time, and he had no technical background. By his own admission (in the Nobel lecture of 1909 of the year), he “regularly never studied physics and electrical engineering. At home in Italy, near Bologna, I began to conduct research and experiments on the wireless transmission of telegraph signs and symbols through Hertz waves only at the beginning of 1895 of the year. ” Both Marconi and Popov considered their teacher of the German physicist G. Hertz, who discovered radio waves. Hertz came close to creating the radio, but this was prevented by his sudden death in January 1894, at the age of thirty-six. It is therefore not surprising that scientists in various countries made the inevitable discovery almost simultaneously and independently of each other. This happened more than once in the history of science.

True, the behavior of Marconi and his supporters calls this simultaneity into question. The application of the Italian researcher to the patent office was kept secret for a long time. It was alleged that it was destroyed, and only in 2004, the Marconi corporation made it public. This document, compiled in very vague terms, is called “Improvements in equipment for the transmission of electrical impulses and signals.” Thus, Marconi is already posing himself - after all, only something that already exists can be improved. Of course, there is a possibility that the Italian meant not the discoveries of Popov, but of other outstanding scientists - Oliver Lodge and Nikola Tesla. Thus, Lodge publicly demonstrated radio transmission in the summer of 1894, but did not take care of the practical application of his invention. The values ​​of the radio did not realize and Tesla, although later he tried in every way to prove his priority. He discovered the main principles of radio communication back in 1891 year.

But it was Popov who created the first known device for transmitting radio signals. All European scientists, including A. Rigi, Marconi’s supervisor at the University of Bologna, could see his drawing in the Vestnik RFHO. Just a week later, the young specialist arrived in the UK, where he appeared with the “secret” scheme straight into the office of the chief engineer of the postal and telegraph office William Price. The British quickly realized the possibilities of a new kind of communication. Pris helped Marconi get government money and gave him technically competent assistants who helped him assemble the first working transmitter. He was shown to the public in July 1896 of the year, that is, four months after the corresponding demonstration of Popov.

After obtaining the patent, Marconi’s invention was put on a commercial basis. In 1897, the Marconi Wireless Telegraph Company was founded. It became for many years the leading global radio communications corporation. The high profile of the company, like the first radio transmission across the Atlantic in 1901, led to widespread fame. Departments of the company appeared in all corners of the world, and Marconi himself became a millionaire. Marconi was mostly not a scientist, but a businessman. It was business acumen, not a scientific genius, that allowed him to defeat the competition. This was one of the sad foreboding of the new century - the era of the omnipotence of public relations, generated by big money.

Popov was much harder. The Russian authorities did not understand the significance of his invention. When asked by a scientist to allocate money for experiments, the naval minister replied: “I don’t allow money to be let in such a chimera.” True, quite soon the naval authorities realized the need for radio and began to allocate money to the scientist, but very little. Every summer, Popov had to leave for the exhibition in Nizhny Novgorod, where he was in charge of a power station. This “part-time job” allowed keeping a large family, and buying equipment for experiments at their own expense. The Ministry of Navy failed to launch the production of radio transmitters, purchasing devices made according to the Popov scheme by the Frenchman E. Ducrete. But the authorities classified the work of a scientist, which prevented him from taking a patent for an invention.

True, the scientist himself was a modest man, indifferent to wealth, so he did not seek to defend his priority. And the culprit was not the notorious "Russian sloppiness." By all accounts, he was a very collected and punctual man, and modesty, reaching for self-deprecation, is also quite a characteristic feature of a Russian person. So, answering a question from a newspaper, who invented radio after all, he said: “The merit of discovery of the phenomena that served Marconi is Hertz and Branly, then comes a number of applications that have been started by many, including me. Marconi was the first to have the courage to stand on practical ground and in his experiments achieved great results by improving existing instruments. ” Marconi and his supporters willingly used the modesty of the Russian scientist to consolidate their success.

It must be said that during Popov’s life, his priority in the invention of radio was recognized by many foreign scientists. Only after death, the active advertising of the company “Marconi” did its job, forcing not only the broad circles of society, but also the scientific world to forget about the true inventor. One way or another, radio communication has conquered the whole world in just a few years and it has been used in various areas.

Alexander Stepanovich Popov died suddenly on December 31 1905 (January 13 1906) from a stroke. The name of Popov is inscribed in gold letters in the history of Russian and world science. He was a true patriot of his country: “I am a Russian person, and I have the right to give all my knowledge, all my work, all my achievements only to my homeland. And if not contemporaries, then maybe our descendants will understand ... how happy I am that it is not abroad, but a new means of communication has been opened in Russia. ”