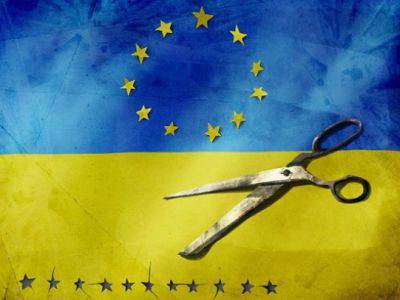 I hasten to reassure readers. Anthem of Ukraine did not change. The line in the title of the article is not from the anthem. Although, it seems to me, such a question could well have been raised in the hymn. What has not died in this country 404?


Many times I read in the comments of our readers the words that a Ukrainian should simply enrage. Although these words are true. Most Ukrainians have long been eating Polish suet for lunch and dinner. Ended in many ways pig in this country. If someone had told 20-30 years ago that the Ukrainians would stop growing pigs, there probably wouldn't have been a better joke. And so they stopped. Truth be told, in every joke there is some joke.

And then - more. The living is always in motion. But the question is - what is alive in Ukraine? Has it ceased to be a living organism? Maybe it turned into a nutrient medium for living organisms?

Complicated? I will explain the course of their thoughts.

The first months after the Maidan, Ukrainians were still inertia proud of their industry. The Soviet backlog allowed to cherish this idea in their heads. We are building rockets. Tanks We can produce the latest. Ships of the most serious classes can. Not to mention metallurgical plants and other chemical industries.

However, it was literally enough a year for even the most obstinate patriot to understand: the industry died. What was built over decades of the USSR, the revolution of hydration smashed to pieces in a year. And the masses of the Ukrainian people threw another idea. The idea was simple to understand anyone, even the most uneducated dill.

Industry normal European country is not needed. All that is needed, Europe already produces in the required quantities. And after the entry into this very Europe, Ukraine will be flooded with cheap European goods. Europeans will even be happy for such a large market.

True, some Ukrainians who have not yet completely lost the ability to think have asked a very reasonable question. Where do we get the money from? But these questions were stopped by the ominous views of "smart" scientists. In Europe, there is some shortage of agricultural products. And in the world too. And the Ukrainian land is fertile. Stick a stick in the spring - in the fall you can drive a new excavator to the market.

The idea so captured the Ukrainian society that they immediately forgot about the dying factories. The townspeople began to actively restore their summer cottages. Villagers look to empty fields.

Even the war in the Donbas was not perceived as painful. Why Ukraine Donbass? Why coal? Why all these plants? We will become the granary of Europe, as once were considered the granary of the USSR. Yes, and the people of this very Donbass nobody needs. They are not villagers. They are workers. And so many people do not need to cultivate the land.

But events began to develop quite differently, as Svidomo villagers saw. It turned out that everything that they produce, now no one needs. Not because the quality is bad. Not even because there is in Europe. Not. Just in the EU, agriculture has long been turned into industry. The same factories and plants. They do not produce nuts and other gears, but meat, potatoes and everything else. Sometimes they do not even use land for this.

And just like in any factory, the final product must be strictly certified and comply with EU standards for many parameters. Yes, and production control should be constant. In a word - industry.

But finally finished off the villagers tax reform. What the government advocated. According to this document, now there will be no benefits and a special VAT regime. The Association Agreement with the EU is one of the points that says this.

"It is no secret that small farmers are engaged in fraud - they pay a black salary, sometimes they work fictitiously and launder money. Therefore, the government must restore order in this area, as the Association suggests. Anyone who works honestly has nothing to fear - he will continue to work or with VAT or without VAT. And all the preferences from the state that were previously received by small farmers are remnants of the past. Once you have grown a crop honestly, sell, pay taxes to the state and sleep well. If you can’t do it, then don’t take it. Europe large associations and agricultural holdings are the engines of the agrarian business. They receive preferences. The state is oriented to make the same system with us. "

This is the opinion of the Ukrainian economist Alexander Okhrimenko.

Simply put, Ukraine does not need small producers. The state deliberately goes to their complete destruction. If Ukraine is Europe, then agriculture should be the same.

It is clear that in Kiev they considered the consequences of such a step. Agrarian west of the country will be against. And the peasant performances will be. Only here is late.

Many Ukrainians wondered why serious forces from the ATO zone were transferred to the western regions. Why did those who already have significant combat experience in the civil war suddenly find themselves deep in the rear? The government answered these questions frequently. This is the fight against the separatists. This is the fight against criminals from the Right Sector. This and Transnistria.

And in fact, as we see today, everything was much simpler. The troops are needed in order to activate the western regions simply to pinch them with military force. The villagers, unlike the workers, are not so united and will not be able to organize any serious militia whatsoever.

The destruction of small-scale farming will automatically lead to a shortage of products. And above all, it will be meat and dairy products. And this deficiency can provoke already citizens. The same Kiev and other regional centers. But this, as can be seen today, the government of Yatsenyuk has provided. True, Ukrainian society is still silent about this. But this is only for now.

But it is enough to read the press of the countries-friends of Ukraine. Unlike Ukrainian peremog, there are practical people there and they seriously discuss any step. So, in the Canadian press published the message of the Ministry of Agriculture.

"Ukraine allowed the export of pork and beef from any Canadian federally registered enterprise, which meets the certification criteria," "Canada seeks to strengthen economic relations with Ukraine and ensure greater access to its markets for Canadian exporters."

Did you notice? There is not a single word about Ukrainian manufacturers. Why? Yes, because Canadians are looking for markets for their products, but they are not at all determined to give their markets Ukrainians. And the Ukrainian market is quite a tasty morsel for Canada. The Ministry of Agriculture estimates it at 50 million dollars annually.

The agreement is not yet signed. There is a refinement of purely technical details. So, soon, apart from Polish pork, Ukrainians will start to consume Canadian too.

And the ruin of small producers will lead to a sharp drop in land prices. That in conditions when Russian firms are deprived of the right to buy anything in Ukraine will lead to the purchase of land by Western companies. Including Canadian.

It is no secret that before the start of the civil war in the Donbas, many hectares of farmland in the Kherson and Nikolaev regions were rented by Finnish and German entrepreneurs. And all the products went to these countries. China has also been asking prices for Ukrainian black soil.

And the introduction of the Western mode of production of agricultural products will lead to the release of a huge reservoir of former peasants. So what is next? Next will be played that scenario, which we talked about two years ago. "Excess" people will be forced to leave the country. No matter where. That same 10-12 of millions of workers will remain.

I understand that the gloomy forecast. But I see no reason for another. Yes, and those who are able to resist this, to be honest, too.

We often used the common expression - go Rubicon. Yes, the Rubicon is indeed Ukraine transitioned. A state that has lost political, economic, ideological, even moral independence will disappear. New to new stories Europe, there is a banana republic. Republic of sunflower ...

Ctrl Enter
Noticed oshЫbku Highlight text and press. Ctrl + Enter
We are
Results of the week. "The truth is easy and pleasant to say ..."Results of the week. “Look, the whole face is black! Have you ever read Moidodyr? ”
Military Reviewin Yandex News
Military Reviewin Google News
161 comment
Information
Dear reader, to leave comments on the publication, you must sign in.