Aviation and navy of Russia: rise or fall? 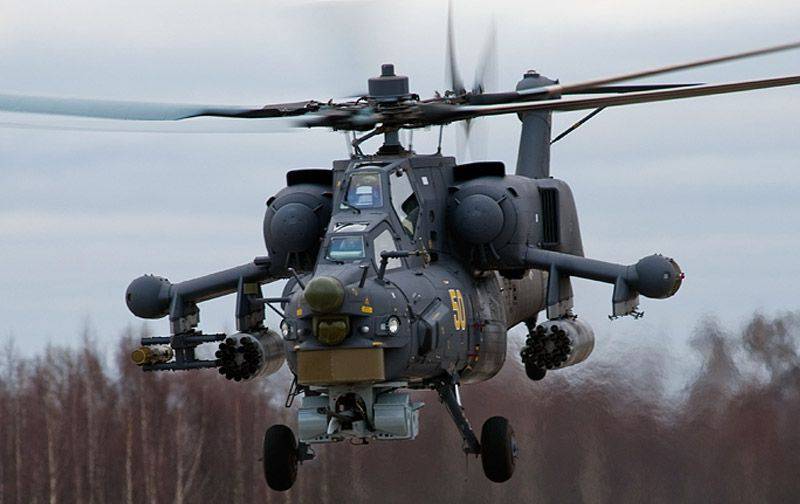 An abundance of articles about the unprecedented revival of Russian fleet and the air force causes mixed feelings. Is that really true? We who were born in the late USSR lived for so long in conditions of falls and defeats that they became our organic part. We are unaccustomed to believe in victory. And the reports of American analysts writing about the rebellious from the ashes and again extremely dangerous Russian Navy cause us doubts. However, distinguishing truth from fiction is simple enough.

Subjective evaluations, of course, are important. We are all humans. A good attitude and self-reliance cost hundreds of ships. Nevertheless, the main drawback of other assessments (“everything is fine with us” and “everything is bad with us”) is that they are biased and do not give specifics. What indicator can accurately reflect the real situation in the Russian Navy? The number of miles traveled and burned tons of fuel, running hours. But the average person has almost no access to this information.

Under these conditions, the most accurate indicator of fleet care from the state is the number of ships and vessels ordered for the Navy. And not just ordered, but completed. This indicator also characterizes the capabilities of the shipbuilding industry.

What are the disadvantages of this indicator? In the first place inertia. From the beginning of the preparation for the construction of the vessel to its delivery to the customer pass years. That is, if right now we decide to start building a ship and allocate money for it, we will see the real fruit of our efforts only in a few years.

And vice versa, if we build ships in series and suddenly decide to give up this senseless business, the pipeline will not stop instantly. The buildings already standing on the stocks are financed, equipment has been ordered for them and contractors have already shipped everything that is required. The ship will be completed in a few years, although we have lost interest in it now. At the same time, of course, we must understand that it is easier to destroy than to build, therefore the “incubation” period of collapse is undoubtedly shorter than the same “incubation” period of growth.

Therefore, looking at the statistics figures, one should clearly realize that the fall or rise of shipbuilding did not begin at the moment of actually noticeable rise or fall, but several years earlier. 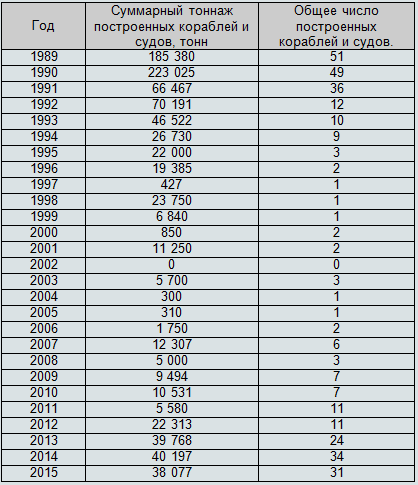 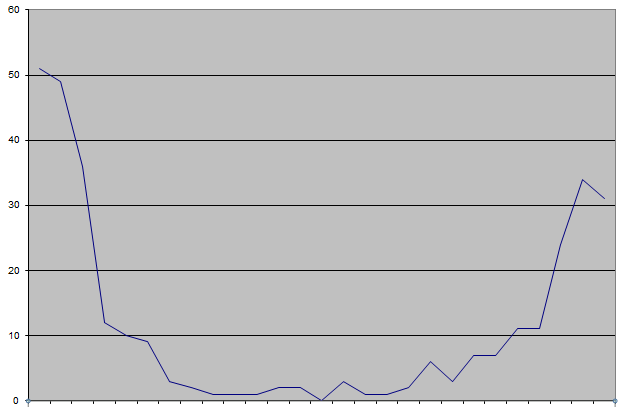 What do we see as a result? The collapse of shipbuilding in 1993-95. This means that the state actually abandoned military shipbuilding during the 1990-1991 years. Just on the eve of the collapse of the USSR. What happened next - only the completion of what else could be completed. There could be no talk of any new constructions and projects. The bottom of this fall was reached in 2002 year - zero ships were built.

Uncertain growth was seen only in 2007-2010's. During these years, the first completely new projects created in post-Soviet Russia from scratch appeared - for example, the TFR of the 20380 project. All this speaks of the weak, but still the first attempts to revive the fleet, at least minimally, undertaken in 2005-2008.

Finally, more steady growth is seen from the year 2012, i.e. seriously began to engage in military shipbuilding at the turn of 2008-2010's. The connection with the conflict in Ossetia and Abkhazia is obvious, when it became clear even to a particularly liberal state that it would not hurt to have some fleet.

The 2015 statistics for the year are incomplete, but it is possible that the fall really does take place: today, sanctions affecting the launch of actually finished ships are in effect. At the same time, it is obvious that the volume of military shipbuilding in Russia over the 2012-2015 years has steadily exceeded the period of the 1995-2010 years. By the number of built ships, we are approximately at the level of 60% of the level of 1989 of the year, and by tonnage about 20%. The latter is partly due to a significant reduction in our ocean ambitions. Today we mainly build ships of the near-sea zone, while in the USSR the share of ships in the far-off ocean zone reached half of all military shipbuilding.

Evaluating this statistics, it is also necessary to take into account the fact that part of the shipbuilding capacities of Russia is now absent. Those. reach the level of the USSR, in principle, impossible. Moreover, the loss of power is quite serious. For example, the Nikolaev SSZ was one of the best factories in the industry, the only one to build aircraft carrier ships, in fact, second in power after the Sevmashzavod. There is no “Leninskaya smithy” in Kiev, there is no Kherson CVD, there is no number of small ship-repair enterprises in Estonia and Latvia. In fact, some factories in Russia itself were destroyed.

Really nothing special. Our country deserves more. At least 50% of 1989 of the year by tonnage is quite real. At this rate, it is quite possible to build a very dangerous and toothy fleet, even if not an ocean, like the US Navy. Such a fleet will be fully capable of causing unacceptable damage to the aggressor or defending the interests of the state in peacetime.
The main thing that encourages is not the “zero” 2002 year.

The main purpose of creating this article, of course, was the presentation of statistics on ships and fleet. Aviation will be touched only superficially, because statistics on it is maintained and publicly available, unlike the naval one (http://russianplanes.net/registr).

Unlike the section on fleet, the statistics on the aircraft industry covers all aircraft built at Russian plants, including for a foreign customer. That is why even in the worst years, these figures did not equal zero. Even in the hardest times, Russia still supplied at least piece aircraft for export. However, the tendency to catch it does not interfere. Another important note: 2015 year is excluded, because there are still no full statistics for it, but obviously, some recession should be expected. 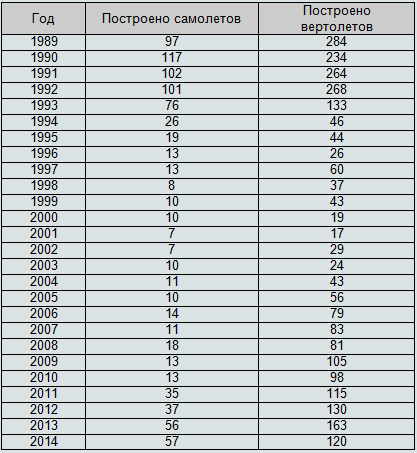 As can be seen from the table, things in the aircraft industry are somewhat "more fun." Since the tonnage for aircraft is not accepted, and even stupid, the assessment applies only to the number of aircraft released. On the production of aircraft, we reach 50% of the 1989 of the year, and even more than 50% for helicopters.

Surely we can say that the most difficult times are over. And the shipbuilding and aviation industries were able to survive the devastating effects of the 90's. However, it is clear that the level of the USSR to reach in the near future will not work. The outlined success is still too fragile and unstable. It is not by chance that right now we are being beaten by sanctions. Right now there is still a chance to inflict heavy damage on the beginning and still too weak revival of the industry. Competitors must be destroyed while they are weak. That is why today they are putting pressure on Russia as never before, because if you do not reverse the trend today, it will be much more difficult in 5-6 years.

Another thing is obvious: there was no industrial paradise in the 90s. The fact that in the first years after the collapse of the USSR something else was being built and assembled speaks not about some successes of the democratic authorities of the new Russia, but only about the strength of the industrial power that the USSR created and which continued to work for several years even after the death of the state . The separate white spots of 90 (such as the surrender of "Peter the Great" in 1998) also speak more about the will of workers and engineers, exclusively for the sake of the motherland, pulling the hull and side, without receiving salaries and covens at night to feed the families, rather than merits of reformers from a market economy.

None of us wants to go back to 90's. Therefore, all that is required of us is not to give our probable opponents such joy as the repeated collapse of our production and armed forces.