January 13 2016
80
Rifle ammunition systems weapons represent a separate design task, without a successful solution of which it is impossible to create effective weapons. In particular, in the context of machine-gun armament, various systems are of great interest, which make it possible to increase the size of ready-to-use ammunition and thereby ensure long-term firing without reloading. More recently, an interesting project of such a system was presented by domestic designers.


A domestic device designed to enhance the combat qualities of existing machine guns was developed by FRONT-tactical systems. The creation of a new product, which received the designation "Scorpio", was carried out on its own initiative, without an order from the military department or security agencies. In order to increase the ammunition of the machine gun, ready for use, it was decided to abandon the standard boxes for tapes, replacing them with a larger container and a special device for feeding the cartridge tape to the receiving window of the machine gun.

In its current form, the Scorpion system consists of several main parts. A metal box-container of corresponding dimensions is intended for storage of a tape with cartridges. A special flexible sleeve for feeding cartridges is connected to it, at the second end of which a bracket is provided for mounting on a machine gun. Such architecture of the kit allows it to produce various options, both stationary and portable. 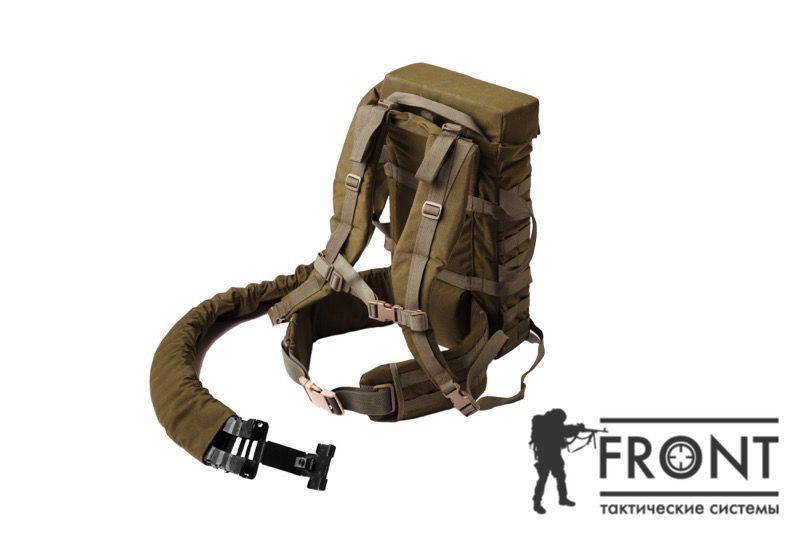 It should be noted that the idea of ​​using flexible metal hoses for feeding tapes is not a novelty. Similar designs were developed in the first half of the last century, and even found application in practice in various fields. The use of a flexible sleeve allows you to connect the weapon with the cartridge case, as well as to ensure the correct interaction of the cartridge belt, the box and the weapon when you change their position in space. As a result, such constructions are the optimal solution to the existing problems.

The set of "Scorpion" includes several basic elements. A metal box-container is used for storing and carrying the tape with cartridges. In the basic configuration, it is 40x10x30 cm in size and holds 475 cartridges in one tape. For carrying the box, it is proposed to use a special backpack, adjustable in accordance with the anatomy of the arrow. A special cap with fasteners for a flexible sleeve is mounted on the ammo box. The sleeve itself is a construction of a large number of metal segments that can change position relative to each other within certain sectors. The sleeve length is 160 cm, width 10 cm, thickness –2,5 cm, which allows it to hold up to 75 cartridges. If necessary, the sleeve is equipped with a protective cover. The sleeve is equipped with a bracket that allows you to connect it with a weapon. Kit without ammunition weighs about 4,1 kg.

According to the manufacturer, in its basic configuration, the Scorpion kit is designed for use with 7,62x54 mm R rifle cartridges and loose metal ribbons. In preparation for shooting in the box and the sleeve is placed a single tape on 550 cartridges. The end of the tape is displayed to the receiving window of the weapon. According to reports, the design of the Scorpion kit is designed for use with Kalashnikov machine guns, however, the possibility of creating modifications for other weapons is mentioned. 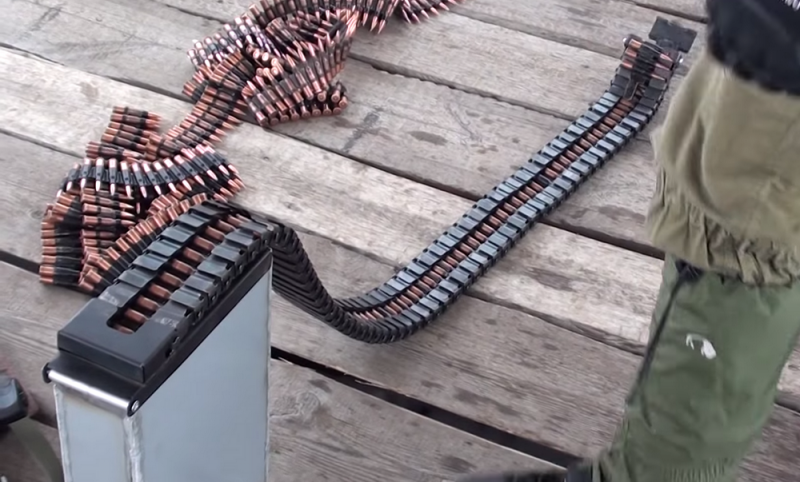 The main feature of the Scorpion system is the use of a common tape for all wearable ammunition, which gives it a number of characteristics and also provides certain advantages over other methods of ammunition. According to the company-developer, "Scorpion" compares favorably with the existing boxes with ribbons for a number of reasons. First of all, a certain reduction in the weight of the whole complex in the form of a machine gun, cartridges and ammunition systems is achieved. So, for carrying 550 cartridges you need six standard metal boxes. If the weight of an empty box is of the order of 1-1,5 kg, the total mass of the complex is reduced by several kilograms only at the expense of the means of storing and carrying ammunition.

The absence of the need to reload the weapon after spending the tape on 100 cartridges (as when using standard boxes) allows you to provide a fire advantage and create a high density of fire. In addition, elements of the "Scorpion" do not interfere with the arrow to move around the battlefield and do not impose serious restrictions on its mobility. Shooting from various positions is possible, during which the sleeve or the backpack does not interfere with the machine-gunner.

The existence of the project "Scorpio" was announced a long time ago. Since that time, the company-developer has conducted all the necessary tests and completed the fine-tuning of the system. In particular, during 2015, the system was tested in polygon conditions. Thanks to this, we managed to get rid of all the flaws and ensure high reliability of operation of all elements of the kit. 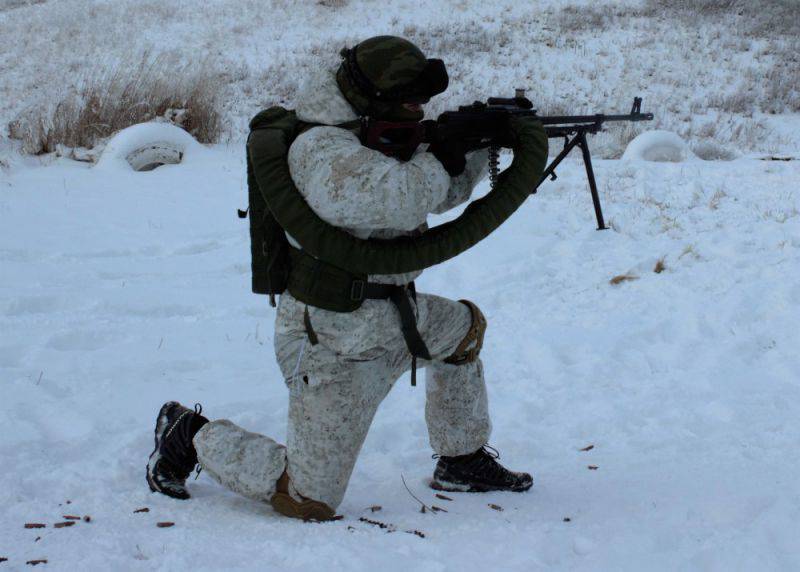 The machine gunner with the system "Scorpion". Photo Basoff1.livejournal.com

To date, the company "FRONT-tactical systems" has mastered the mass production of the "Scorpion" system in the configuration chambered for 7,62х54 mm R and Kalashnikov machine guns of PC, PKM and Pecheneg modifications. Products are assembled under the order within two weeks after receiving the application. At the request of the customer, some changes can be made to the system concerning the knapsack and its belt system. In particular, you can choose the color of the textile elements of the kit.

According to the manufacturer, the selected architecture of the complex allows you to change its main parameters. So, in accordance with the wishes of the customer can be changed the design of the box-container for carrying the tape. In the portable version of the Scorpion, the box can hold up to 1000 cartridges, and this limitation is primarily due to the physical capabilities of the shooter and the weight of the ammunition load. In the manufacture of a stationary version intended for installation on equipment, etc., there are no such restrictions. In this case, the kit can be equipped with boxes of any capacity.

According to reports, the Scorpion ammunition kits are produced in small batches and are delivered to individual customers. There are references to the order of such equipment by representatives of Russian law enforcement agencies and the armed forces. Thus, the original proposal interested its "target audience" and came to practical application. 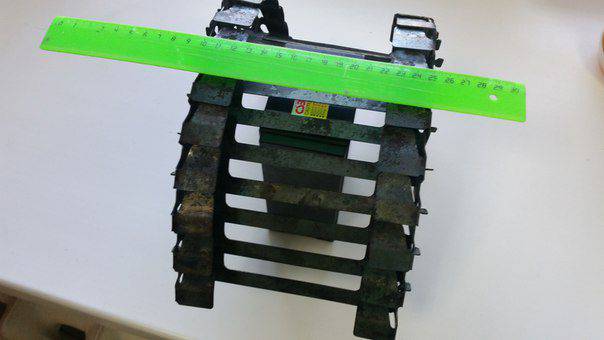 Using his accumulated and other people's experience, the development company is currently working on several options for the development of the Scorpion system. So, last summer, there were reports of the development of a flexible sleeve for feeding 12,7x108 mm ammunition, which can be used for supplying the cliff with a NSV-12,7 “Rock” machine gun or other similar systems. For obvious reasons, this version of the kit will not be a direct analogue of the Scorpion for PC / PKM, but it may well be used as part of the weapons of various equipment. At the same time, he will completely “inherit” all the characteristic advantages of the basic model.

In the future, the creation of new systems of similar architecture for various ammunition is not excluded. It is argued that the flexible hose can even be used to feed an 30-mm grenade for the corresponding weapon. Will potential customers show interest in such offers? Time will tell.

In parallel with the creation of new kits, the development of updated versions of existing equipment is underway. In December last year, work was reported on an upgraded version of the arms to the arms. With the help of new design brackets, the developers are going to ensure compatibility of the Scorpion kit with new modifications of Kalashnikov machine guns, primarily with the Pecheneg machine gun in the bullpup layout. 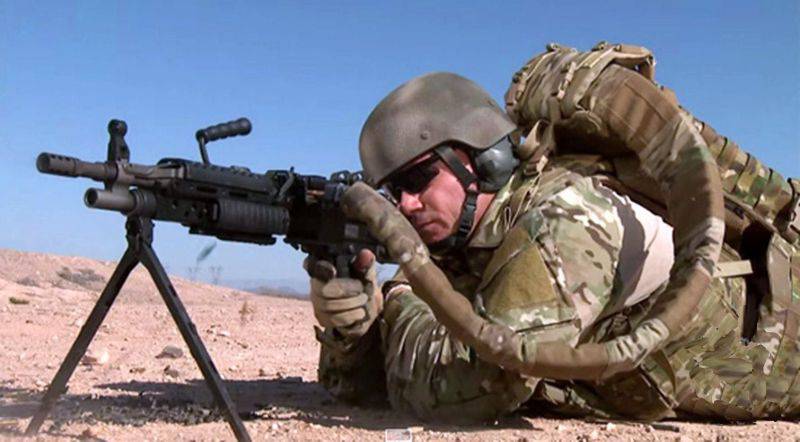 One of the foreign analogues of the Scorpion is the American-developed TYR Tactical MICO system. Photo Warspot.ru

At present, in Russia and abroad, several variants of small-arms ammunition systems are being developed and tested with the supply of cartridges along a flexible metal sleeve. All these products have a similar architecture, and should also have the same advantages over standard designs. However, so far none of these systems have been adopted. Flexible hoses are actively used in the composition of small arms of various equipment, but kits for infantry machine gunners have not yet reached mass use in practice.

The Scorpion ammunition system is of great interest from a technical and tactical point of view. In some publications devoted to this development, it is argued that the original technical solutions of the project can make a real revolution in the field of small arms and methods of its combat use. In particular, it was proposed to develop a new automatic rifle chambered for 7,62x54 mm R, which initially could be used with a flexible sleeve for feeding cartridges, increasing its combat performance. In addition, certain advantages were mentioned related to the rejection of intermediate cartridges and the transfer of all infantry weapons to rifle ammunition.

Despite all the high marks and attempts to present a new domestic development by the revolution in weapons business, the Scorpion kit has not yet interested the Russian military department and has not become the subject of mass supply contracts. However, a number of such products are already used by representatives of various structures. Further prospects of the kit are still in question. Whether the Scorpion will become a regular element of the equipment of Russian machine-gunners is not quite clear.