January 13 2016
107
Watching the meetings in the State Duma of the Russian Federation, you often catch yourself thinking that the deputies of the lower house of the Russian parliament, unfortunately, are not the people who can be an example of our schoolchildren and students in terms of attendance at “classes”. To say to careless students: you look, idiot, at the hall of the Duma meetings and at your audience - take an example from people's representatives, because they are all alone in their seats! .. But in reality there are vacant seats not warmed by fifth points of parliamentarians, more often in times more than places occupied. Sometimes, even with a quick glance, it becomes clear that: a) the hall is empty rather than full, b) some parliamentarians “sit out” for themselves and for that guy, and in addition also vote for their faction colleagues, unceremoniously walking along the rows. 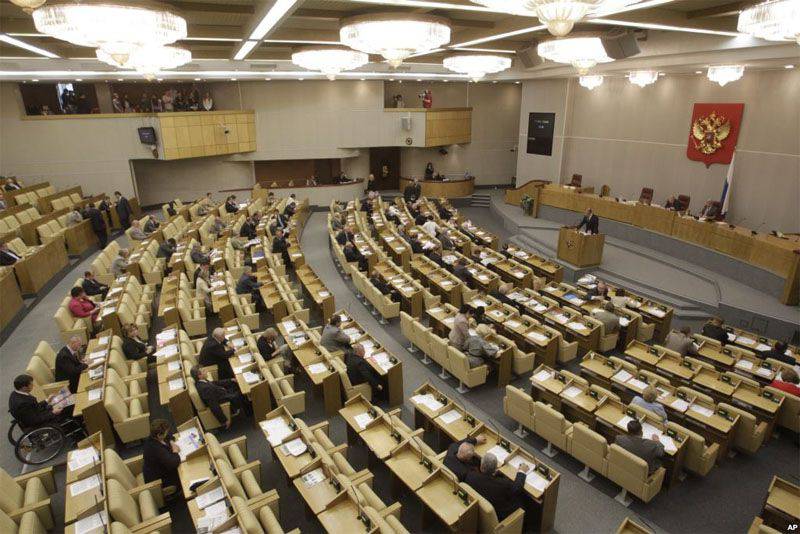 And where are these same colleagues? If officially, the majority works in the regions, has endless meetings with voters on the ground or is outside the walls of the Duma’s meeting room for other purely, of course, valid reasons, including illness, severe ailments or a long delay in the cafeteria or restroom (it happens that the delay is measured in days ...).

Unfortunately, there are no official statistics on the hands of how many Russian deputies, on average, attend meetings on a daily basis (actually present and actually vote on their own behalf). If we consider the issue from the position of an observer for the voting panel, then everything is always in order - the majority is present, there is a quorum, things are going. But the sitting chairs, gaping in emptiness, say that with the attendance of our respected elected representatives not all thank God ...

It turned out that such a problem worries not only the average man in the street, but also the deputies themselves - first of all those who are used to working honestly themselves and are ready to demand the same from other colleagues. So, in October 2015, a group of deputies prepared amendments to the Federal Law “On the status of a member of the Federation Council and the status of a deputy of the State Duma of the Federal Assembly of the Russian Federation”. The deputies (and it just so happened that all the authors of the amendments to the federal law represent the LDPR faction) Svintsov, Lebedev, Kalyuzhny, Nilov and Zolochevsky proposed to punish those parliamentarians who systematically miss meetings, ignore their official duties and in fact disrupt the legislative work. What could be the punishment? It was suggested that careless parliamentarians (both Duma members and senators) be deprived of a mandate not only for systematic absenteeism of meetings, but also for ignoring such work as meetings with voters, visits to the districts from which they were elected (appointed). The authors of the draft laws suggested the possibility of an intra-factional fine for careless colleagues - punishment up to the recall of the mandate.

Representatives of the Liberal Democratic Party of Russia began to work on identifying malicious violators of the set of duties. The picture in the end was very interesting. So, at once, five deputies from this faction never (!) Ever attended meetings of the State Duma. Other fractions of data about the hard-core shirkers decided not to submit for some reason known to them ...

It is quite natural that the deputies who do not fulfill their direct duties, it’s time to bring to justice until the deprivation of the mandate, and such an initiative has matured, although it is late, but it’s better late than never. It seemed that a regulatory document would finally appear that would deprive the notorious “deputy” Ilya Ponomarev of the “crust” of the parliamentarian — the very Ponomarev, to whom the investigation of the Skolkovo case has many questions, and that since last year parliamentary immunity) "deputies", being outside not only the building of the State Duma, but also outside Russia. It would seem that an effective tool will finally emerge, thanks to which people's representatives and the representative of the Federation Council will feel direct responsibility for avoiding the fulfillment of official duties.

However, this should happen, the initiative did not pass ... Yes, yes ... It did not pass.

The question arises: who “braked” a very sensible idea? It is surprising (or not surprising) that the government of the country acted as a brake. According to the newspaper "News"It was the Cabinet of Ministers that rejected the amendments, stating that the people were electing deputies, and this is precisely what could not allow “to revise the election results.”

An interesting statement, isn't it? It turns out that the Russian government is cutting its wings not only to the amendments prepared by lawmakers, but also to the federal law "On the status of a member of the Federation Council and the status of a deputy of the State Duma of the Federal Assembly of the Russian Federation." This law has Chapter II, “Guarantees for the activities of a member of the Federation Council, a State Duma deputy,” and the 12.3 clause http://base.garant.ru/10118919/2/#block_200, which sounds like this:

The law, apparently, states the need for personal participation in the chambers' meetings and responsibility, which is determined inside each of the chambers for the absence of meetings without a valid reason.

It turns out that in the regulations of the chambers there is not a word about responsibility for absenteeism. Words appear in the amendments proposed by the deputies, but these amendments, as already noted, were rejected in the cabinet of ministers.

It turns out to be a paradoxical situation: if a deputy passes to the State Duma (for example, according to parliamentary lists) and does not appear in the Duma from the first day of meetings, is deprivation of his mandate considered “revision of the election results”? If the government thinks so, then this is the real freemen for all sorts of loafers at the level of legislative power. Moreover, this is freemen for corrupt officials of the highest level.
If the same deputy Ponomarev openly declares that someone in the Duma votes for him, while he himself travels around the United States trading Russian interests, then it comes out (at the suggestion of government officials) that even he can feel calm - deputy salary will continue to flow into his account.

This theater of the absurd! It is difficult to choose a different definition ... It turns out that the government issues indulgences to crooks who are elected by the people and do not fulfill their duties? Strangeness, which is difficult to explain by a desire for legality ...

Ctrl Enter
Noticed oshЫbku Highlight text and press. Ctrl + Enter
We are
Results of the week. "Go on a horse, a century of will not be seen!"The tragedy of the American army ("The Atlantic", USA)
Military Reviewin Yandex News
Military Reviewin Google News
107 comments
Information
Dear reader, to leave comments on the publication, you must to register.